Accessibility links
Nebraska DA Wants Grand Jury To Review Black Man's Death By White Bar Owner The district attorney in Omaha had ruled the fatal shooting of African-American James Scurlock by a white bar owner during protests was self defense, but now a further investigation is likely. 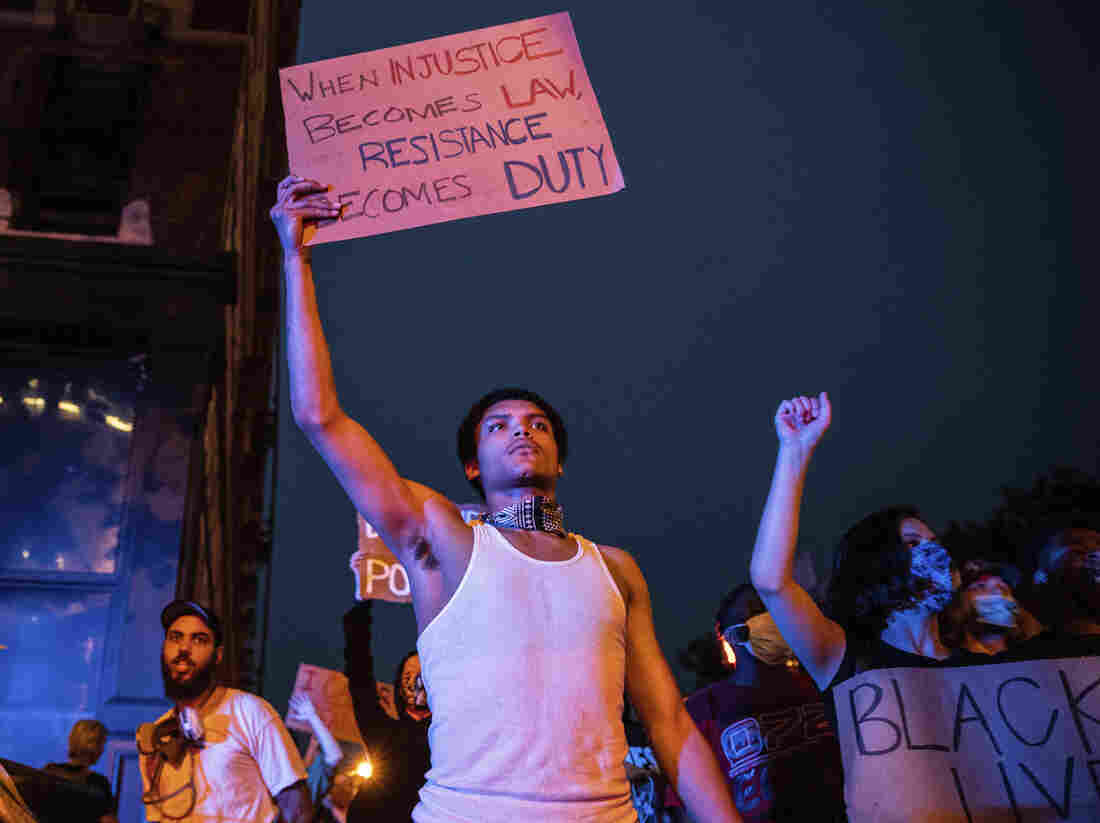 Tyreece Johnson, of Omaha, Neb., and dozens of other people march from the Omaha Douglas Civic Center to the Old Market in Omaha on Wednesday. James Scurlock, a 22-year-old black man, was shot and killed in the Old Market on Saturday night by a white bar owner. Anna Reed/Omaha World-Herald via AP hide caption 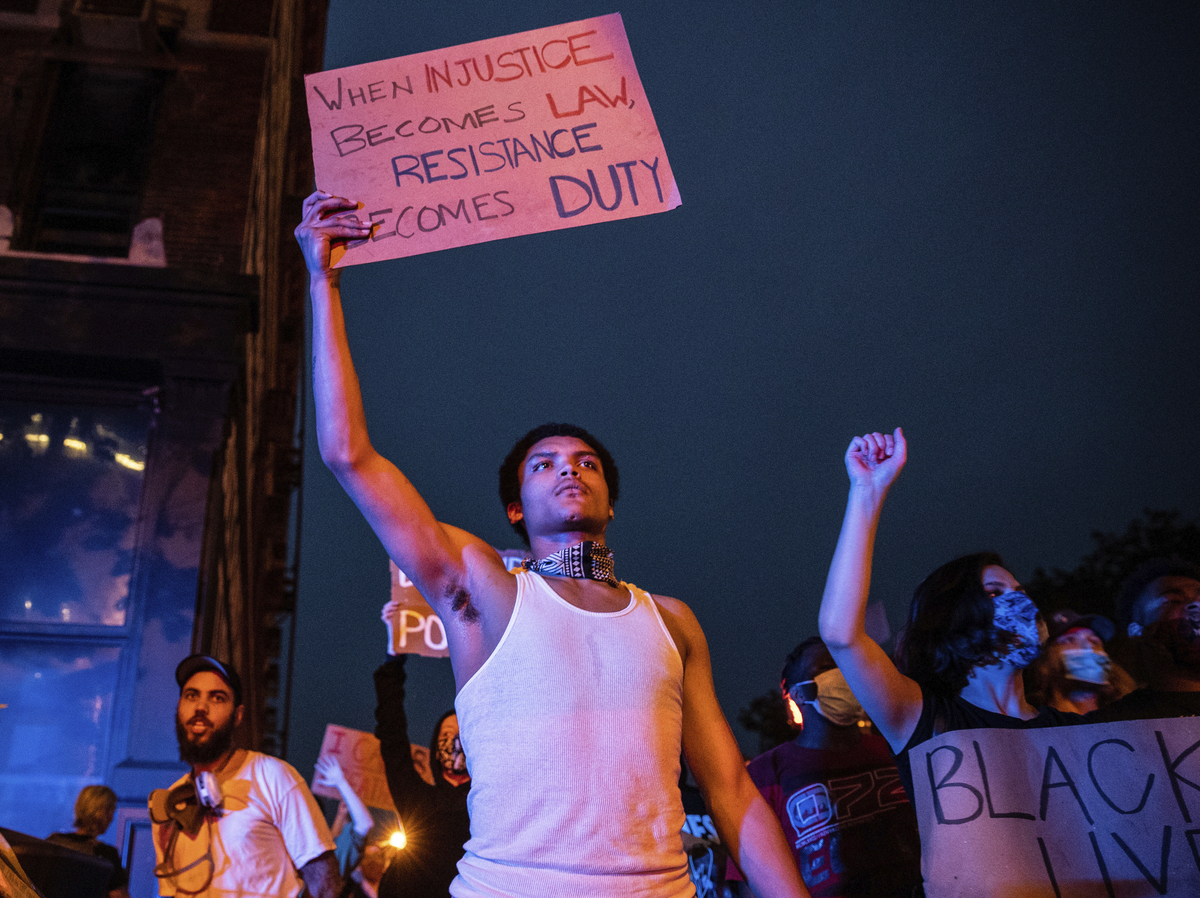 Tyreece Johnson, of Omaha, Neb., and dozens of other people march from the Omaha Douglas Civic Center to the Old Market in Omaha on Wednesday. James Scurlock, a 22-year-old black man, was shot and killed in the Old Market on Saturday night by a white bar owner.

The top prosecutor in Omaha, Neb., will request a grand jury to take a second look at the shooting of James Scurlock, a 22-year-old African-American man who was killed by a white bar owner Saturday night as George Floyd protests in the city turned violent.

Douglas County District Attorney Don Kleine had released the shooting suspect Jake Gardner from custody on Monday, ruling that he acted in self defense.

Across the city, there are spray-painted signs on boarded up shopfronts and makeshift memorials that say "His Name is James." The apparent reversal by the authorities in favor of a broader investigation is being met with some hope.

The historically segregated African-American neighborhood of North Omaha is where Malcolm X was born. Not far from his memorial center and museum, is the Culxr House, a space for artists and activists.

It's been transformed into a staging area for Omaha's demonstrations. Activists unload cases of donated bottled water and gatorade. There are boxes of rubber gloves, masks and first aid kits on the carpet. 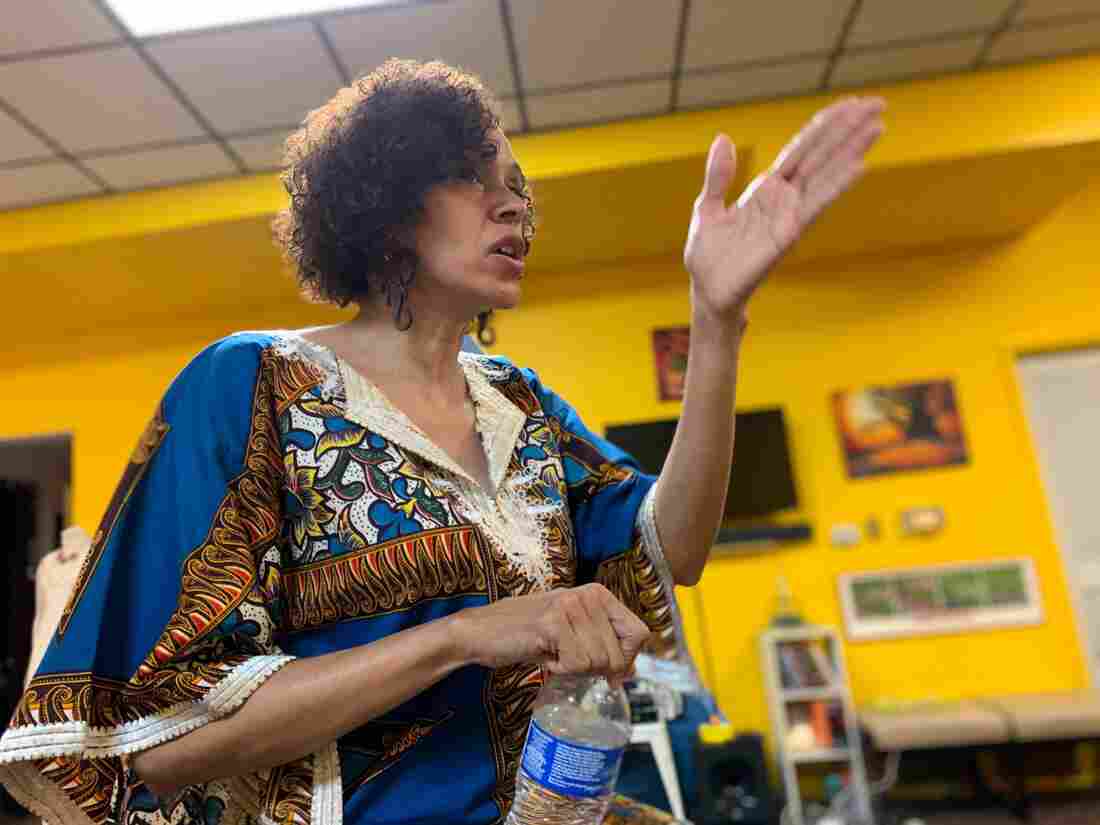 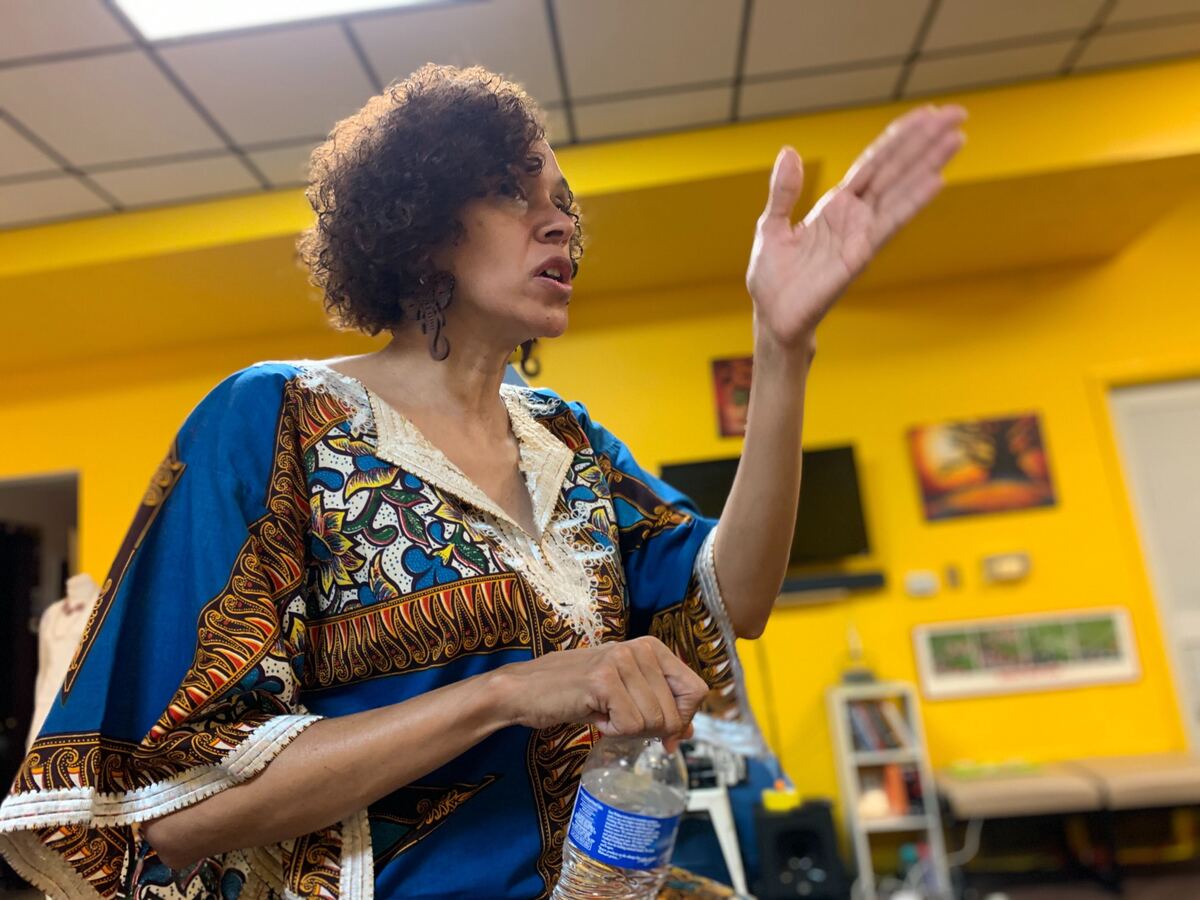 Longtime Omaha civil rights activist Michelle Troxclair says her city has a long history of systemic racism from policing to transportation to housing.

For Omaha's African-American leaders, Saturday's shooting of James Scurlock is a reminder of what they say has been a legacy of violence and police brutality in this conservative-leaning Midwestern city.

Last year, the community marked the 100-year anniversary of a lynching that occurred on the courthouse steps after a black man was accused of raping a white woman without evidence. Troxclair points more recently to 1969, when Vivian Strong, a 14-year-old black girl, was shot without warning by police.

It sparked three days of riots.

These last six days of heated protests across Omaha are a response to what Troxclair sees as the country lurching backwards.

"The election of Donald Trump is a backlash and an outward assault on the perceived loss of power of white people in this country," she says. "They are terrified and there's nothing scarier than scared white people."

The white bar owner who was in a scuffle with James Scurlock — Jake Gardner — has said he shot him because he feared for his life. Some blurry cell phone video of the evidence has gone viral. Omaha police are now pleading with the public to come forward with any more evidence from that night. Eyewitnesses told NPR the atmosphere in front of the bar's smashed windows leading up to the shooting was racially charged.

Since then, there's been an overwhelming police presence in the streets: cops in riot gear supported by the National Guard have shown up in force in the evenings, following peaceful protests during the day. Curfews will again be enforced Friday night in the city's Old Market district, site of the Scurlock killing.

You can't not look at the big red hemorrhage in community organizer Morgann Freeman's right eye. She got it after tear gas caused her to fall to the street.

How Protests Can Lead To Legislative Change

How Protests Can Lead To Legislative Change

"It looks worse than it is, but, to be frank, I am looking forward to seeing and talking to our political leadership," Freeman says. "I want to literally look them in the eye so they see what they did."

African Americans make up about 13% of Omaha's population but people in North Omaha say their neighborhood has long been victim to over-policing. Freeman, 29, ran for Congress last year, the first Black woman to do so in Nebraska.

She says the November elections are still the best place for change. But there's a lot of anger on the streets right now.

"Whether they will admit it or not they have declared martial law on black lives and anyone that is standing in support of them," Freeman says.

"Wow, they said that? Okay," is the response of Ben Gray, the only black member of the Omaha City Council.

He represents North Omaha. But in his view, the relationship between police and communities of color has actually gotten a lot better in the past few years.

"I'm not saying that we have a perfect police department, let me say that," Gray says. "I know we have some officers that probably should not be on the force, but by and large the leadership at the top reflects what happens at the bottom."

Gray says the police chief has brought reforms. Among other things, there's also now a weekly meeting called Omaha 360 where a racially diverse mix of cops, business owners and residents of North Omaha get together to talk. 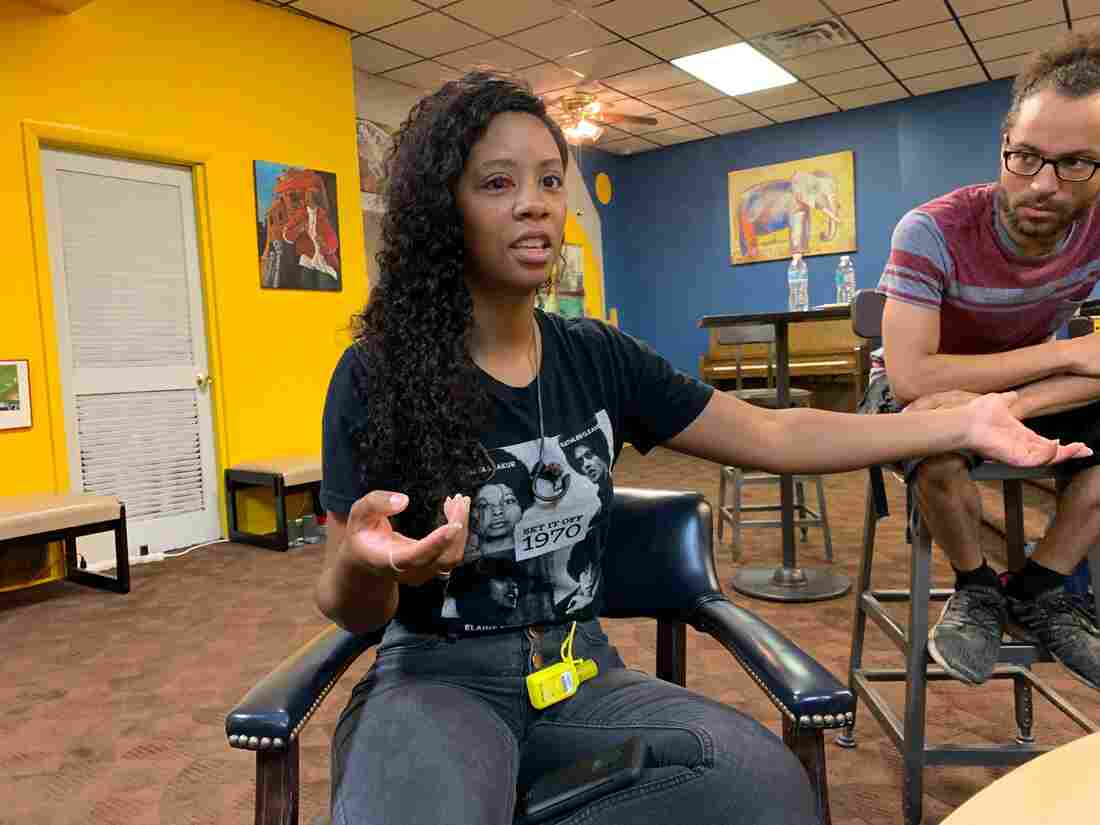 Black Lives Matter activist Morgann Freeman has an unmistakable red hemorrhage in her right eye after she says she fell to the ground as police tear gassed a peaceful protest. Kirk Siegler/NPR hide caption 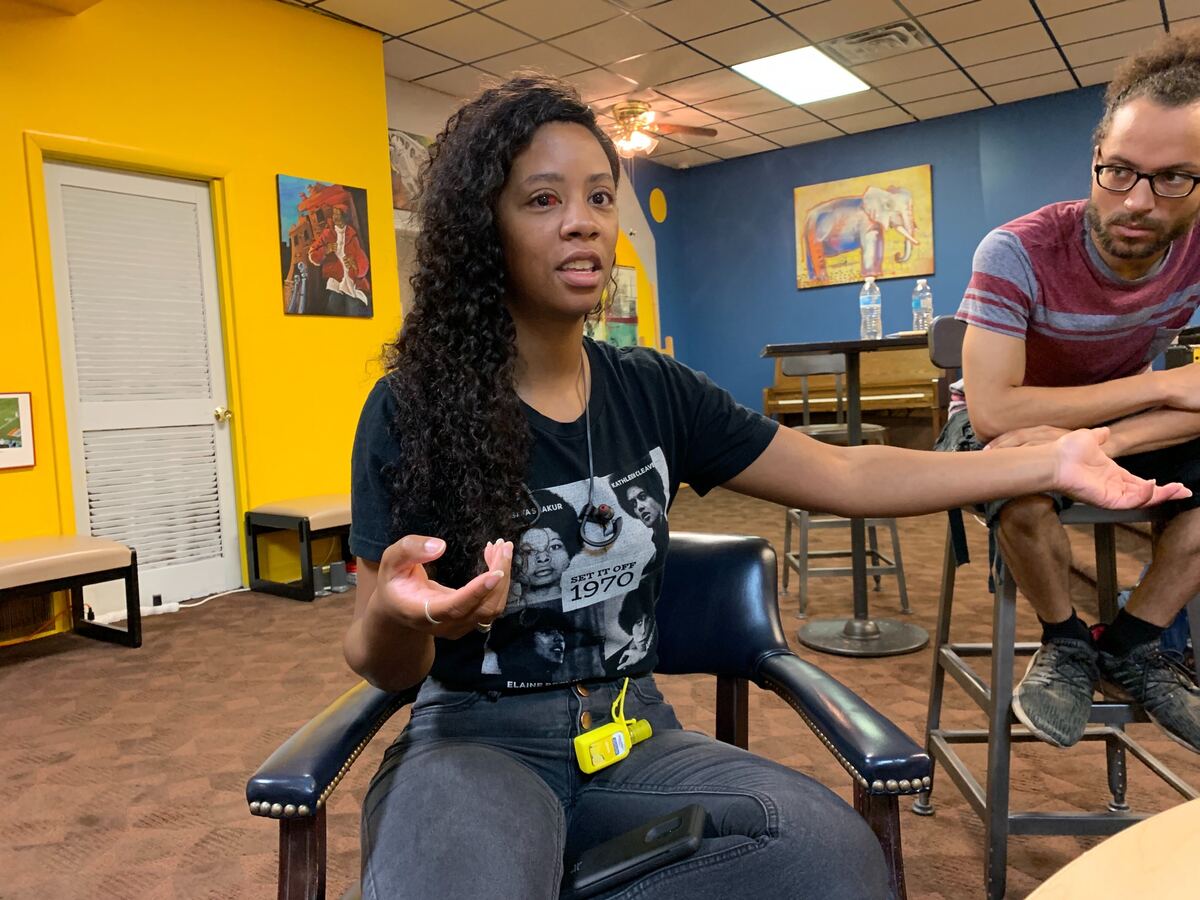 Black Lives Matter activist Morgann Freeman has an unmistakable red hemorrhage in her right eye after she says she fell to the ground as police tear gassed a peaceful protest.

Gray also led the pressure calling for a grand jury and a special prosecutor to further investigate the Scurlock shooting.

"I have been pleased this week, in spite of all the circumstances that existed that were negative around us, I've had a number of CEOs, a number of other people call [to say] 'how do we do this,' we gotta fix this," Gray says.

Gray says this moment is a narrow window to fix institutionalized racism for good. Talking in his empty office through a mask, he added the coronavirus pandemic poses additional challenges to the fight. The virus has not seemed to hit the city's African American population as hard as in other parts of the country, though like in other neighborhoods, job insecurity is a huge issue amid rampant nationwide unemployment.

Due to delays from the pandemic, any likely grand jury investigation may not begin for weeks, if not even months. After initially resisting, the district attorney here on Wednesday said he welcomed an independent review of his findings that he insisted he still stands by. But he also cited broad public mistrust in the justice system in announcing his support for a second look at the Scurlock case.

That mistrust is definitely clear — and widespread — in North Omaha.

That's definitely clear in North Omaha. In the neighborhood's leafy Benson Park, Yashica Sanders said the discrimination has gone on too long.

"They're tired of being silent, people are willing to stand up," she said.

Her cousin, Terrell Von, said he's frustrated that some of the protests had gone violent and there was looting — the two only just were able to return to work after two months of being in lockdown from the pandemic.

"This nation needs some healing," Von said. "It needs a good leader that can at least empathize and sympathize and ... talk to the people."