Journalists covering the protests against George Floyd's death at the hands of a Minneapolis police officer have been confronted by violent police and angry demonstrators.

Now they're confronting their newsroom bosses about editorial judgment in what they choose to publish on the subject. 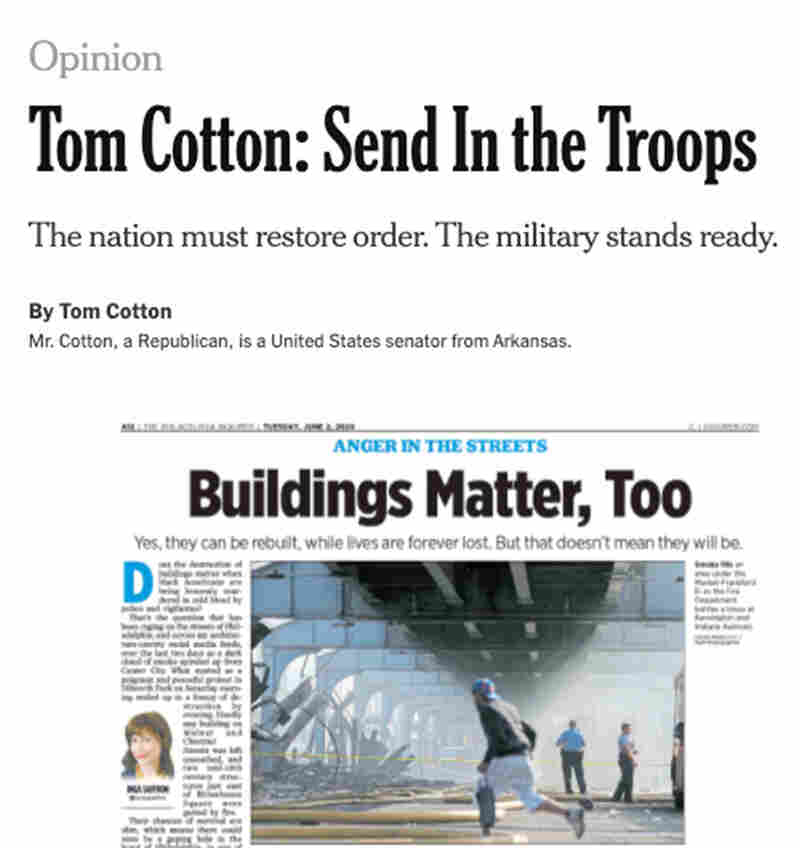 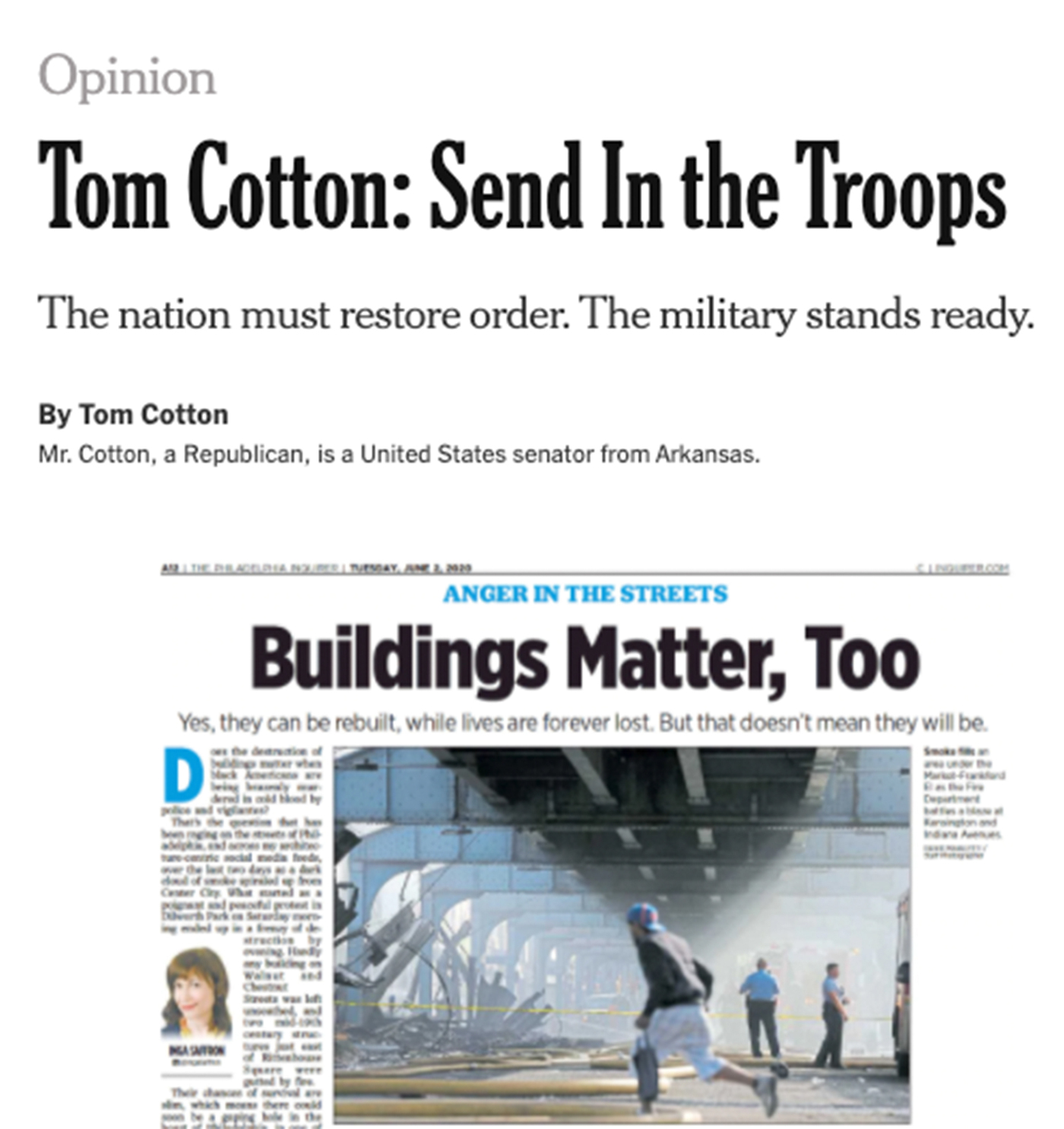 After reporters publicly rebelled, leaders at The New York Times and The Philadelphia Inquirer apologized for publishing controversial pieces on law enforcement and the protests over racial injustice.

The New York Times, The Philadelphia Inquirer/Screenshot by NPR

The New York Times and The Philadelphia Inquirer have apologized after their own journalists publicly denounced their respective papers' editorial judgment for choices they said belittled the structural racism facing African Americans. In Philadelphia, reporters staged a sickout. At The New York Times, journalists of color got hundreds of their peers to sign onto a letter of protest.

The Times' reversal Thursday over the publication of a senator's opinion piece calling for a militarized federal response to the violent episodes of protest was striking. It followed earlier statements from top executives in which they defended the decision to publish the column in the first place.

The paper's reporters took to Twitter and other social media platforms over the past few days to denounce the piece by Sen. Tom Cotton titled "Send in the Troops." The Arkansas Republican urged President Trump to invoke a little-known and -used law to assert vast authority over domestic law enforcement. Times journalists objected to Cotton's message and several assertions disputed or disproved in the paper's news coverage.

"Please know that there are many (if still not enough of us) working like hell to hold our institution accountable each and every day," tweeted national reporter John Eligon, who covers race for The Times.

"If electeds want to make provocative arguments[,] let them withstand the questions and context of a news story, not unvarnished and unchecked," Times national political reporter Astead Herndon wrote on Twitter.

The New York News Guild called Cotton's piece "a clear threat to the health and safety of the journalists we represent." In cities across the country, reporters said they have been beaten, tear-gassed, arrested and mistreated while covering the protests. Many of those episodes have been captured on video and shared on social media by journalists or others present.

Opinion writer Bari Weiss, who is something of a conservative contrarian at The Times, tweeted that the paper's "civil war" reflected the tensions between "young wokes" and the "mostly 40+ liberals" at the paper. She said the instinct to shut down Cotton's argument in The Times reflected an intolerance that she typically ascribed to college students.

At The Philadelphia Inquirer, journalists were outraged this week by the headline "Buildings Matter, Too" for a column about looting and vandalism. At a two-hour newsroom meeting Wednesday, reporters told their bosses it seemed to equate property with the loss of human life.

The Inquirer's top three editors publicly apologized, writing, "An enormous amount of pressure sits on the shoulders of black and brown Inquirer journalists, and mistakes like this, made by the publication they work for, are profoundly demoralizing."

At The Times, James Bennet, the editorial page editor, first defended the decision to publish Cotton's piece. He said Wednesday evening that the newspaper's editorial stance in favor of the protesters' call for justice should be publicly tested by opposing views. Publisher A.G. Sulzberger backed Bennet in public remarks Thursday morning. But by early Thursday evening, The Times had issued a statement saying that the column's publication had been rushed and that it did not meet the paper's standards.

Cotton's staff told the National Review that they had gone back and forth with The Times over the topic before submitting the piece, and afterward, as The Times staff fact-checked it. A Cotton staffer called the process "rigorous and somewhat onerous."

But at a newsroomwide meeting Friday, Bennet told colleagues he had not read Cotton's piece before it ran online. The article was withheld from the paper's print editions.

Sulzberger told Times staffers that the column was "'contemptuous' in tone and should not have been published," according to reporter Trip Gabriel, who participated in the meeting. Sulzberger promised the paper would reduce its editorial fare and instead do more stringent fact-checking.

Not all would be satisfied, however. Veteran Times sports columnist Michael Powell wrote that the paper's reversal and apology was "an embarrassing retreat from principle."