Accessibility links
Wisconsin Voters On Floyd Killing, Trump And Biden Responses Kenosha County, Wis., voted for the president by less than 1%. Republicans and Democrats are horrified by George Floyd's killing, but the unity falters when Trump and Biden enter the conversation. 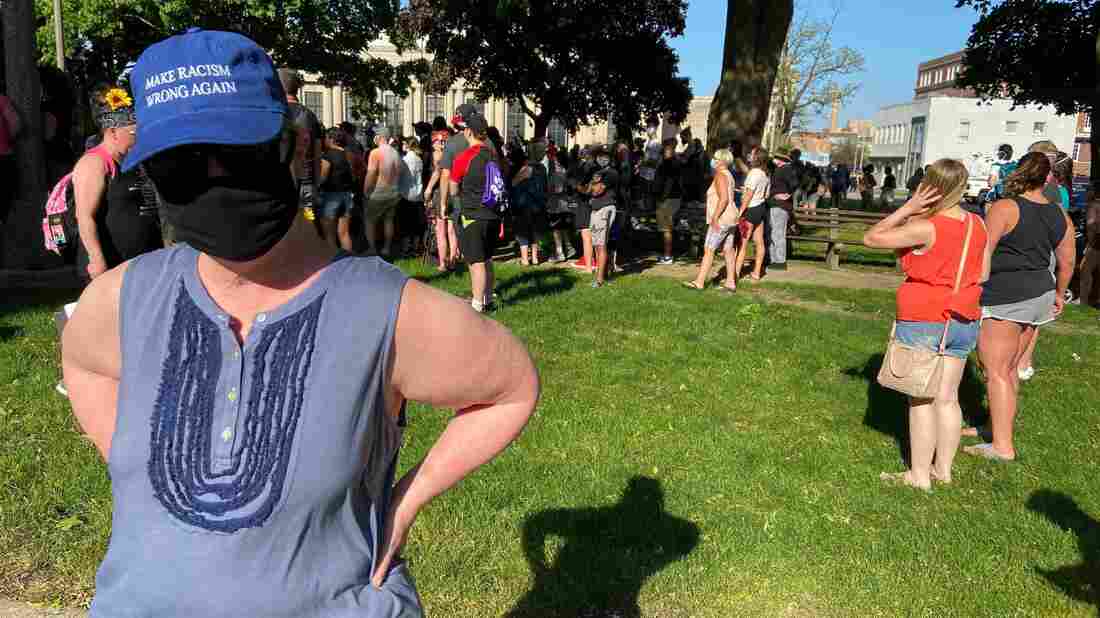 Wearing a mask to protect herself from the coronavirus and a hat that reads "Make Racism Wrong Again," Lydia Spottswood joins a protest in Kenosha, Wis., in response to George Floyd's killing by police. She thinks people are tired of President Trump's "meanness." Asma Khalid/NPR hide caption 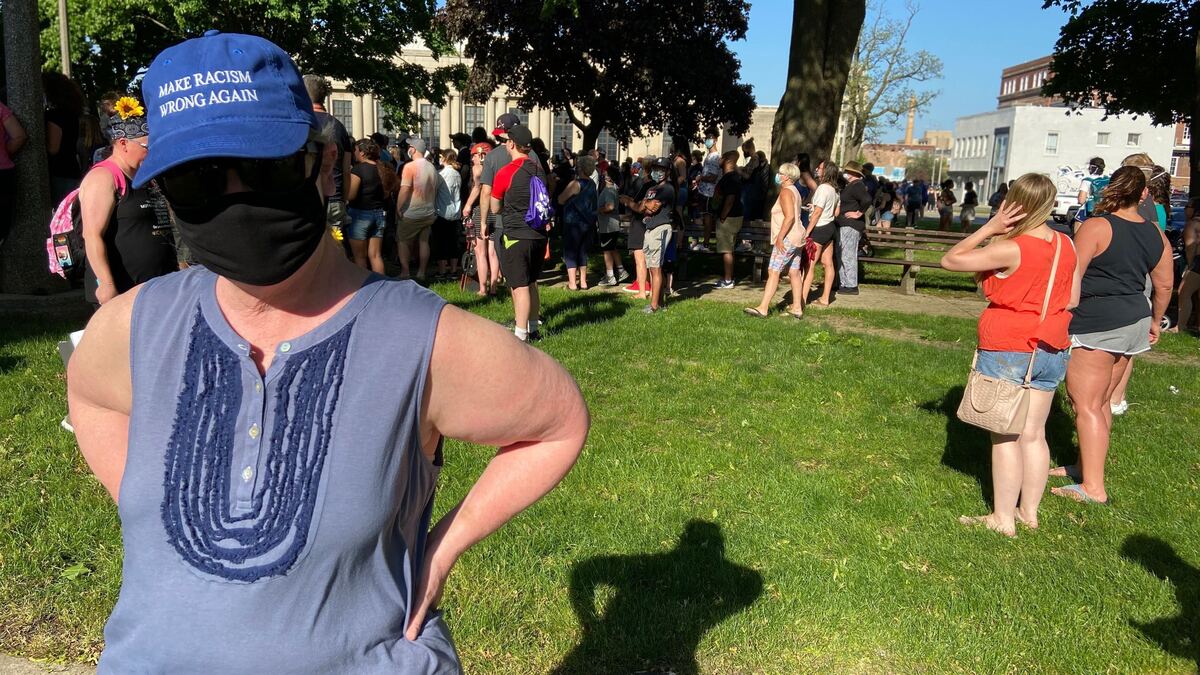 Wearing a mask to protect herself from the coronavirus and a hat that reads "Make Racism Wrong Again," Lydia Spottswood joins a protest in Kenosha, Wis., in response to George Floyd's killing by police. She thinks people are tired of President Trump's "meanness."

Zach Rodriguez, a 22-year-old Republican from Kenosha, Wis., says he was disgusted when he watched video footage of George Floyd being killed by police.

"It was appalling," Rodriguez said, noting he was glad to see protesters in his hometown take to the streets.

"In the past, we saw a lot of 'Black Lives Matter' versus 'All Lives Matter.' In this case, I think it's really starting to hit home, especially in the Republican Party. Black lives do matter," he said.

A poll this week from Monmouth University found that for the first time, a majority of Americans believe the police are more likely to use excessive force with a black person than with a white person. Four years ago, only about a third of Americans held that view.

The big shift is due, in large part, to the changing attitudes of white people. One question, though, is what that might mean politically come November.

In more than a dozen interviews this week with both Republicans and Democrats in Kenosha County, Wis., the condemnation of Floyd's killing was common. Some openly acknowledged the role of racism with more candor than you might hear in traditional political interviews.

But how they perceived the president's response largely fell along predictable political lines.

Kenosha County is a little more than an hour north of Chicago. To the east, the county hugs Lake Michigan with beaches and boats, to the west, it feels like rural Wisconsin with wide expanses of open land.

In every presidential election since 1976, the county has voted for a Democrat, that is until 2016 when it broke for Donald Trump by less than half of 1%.

On a recent afternoon in Kenosha, hundreds of people, many of them white, gathered in a local park and knelt on one knee for nine minutes, in memory of the time in which George Floyd was killed when an officer put a knee on his neck. 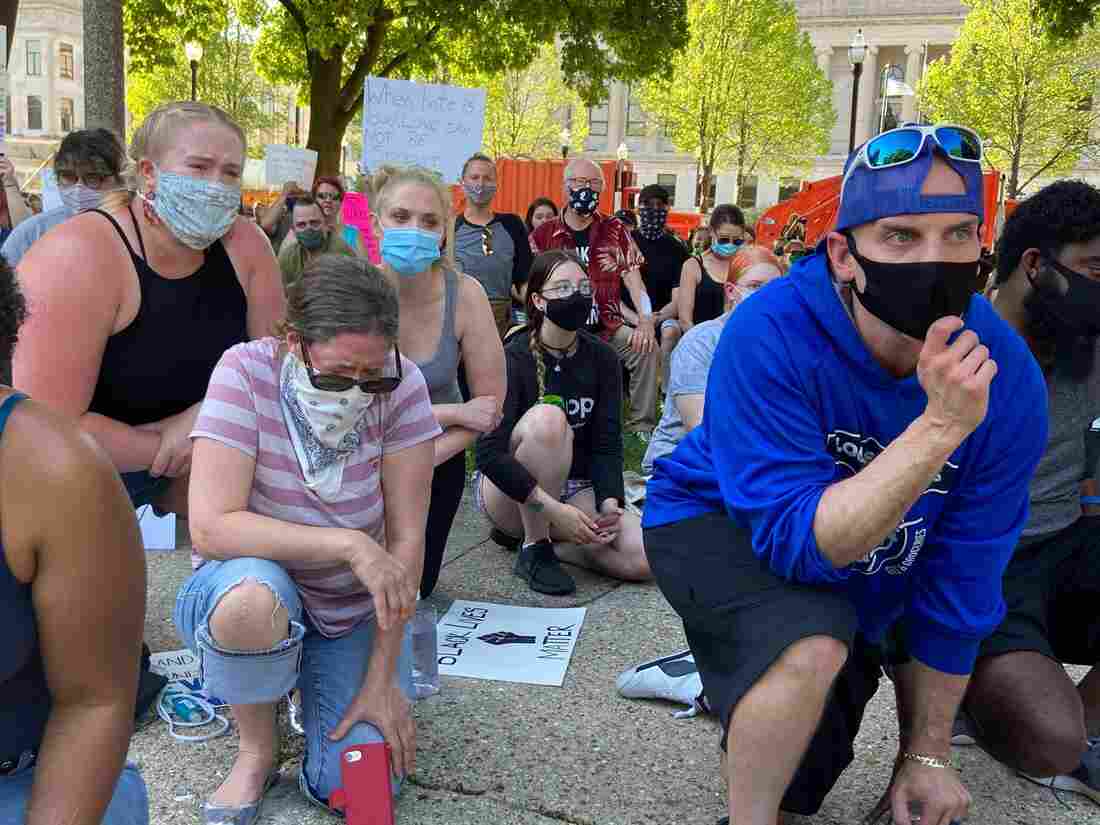 Hundreds of people gathered in a park in downtown Kenosha, Wis., to kneel for 9 minutes in memory of George Floyd, an African American man who was killed when an officer knelt on his neck for nine minutes. Asma Khalid/NPR hide caption 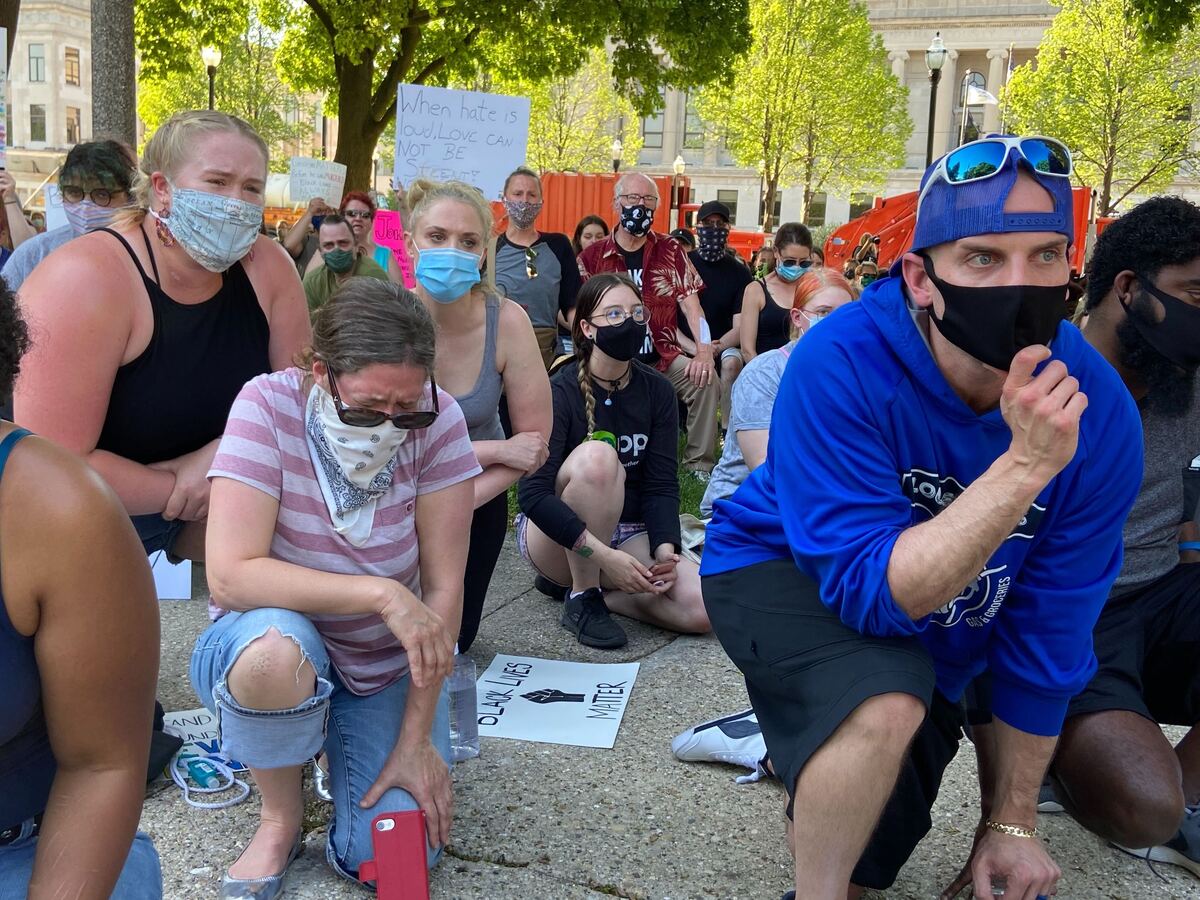 Hundreds of people gathered in a park in downtown Kenosha, Wis., to kneel for 9 minutes in memory of George Floyd, an African American man who was killed when an officer knelt on his neck for nine minutes.

Lydia Spottswood was in the crowd, wearing a baseball cap that read "Make Racism Wrong Again."

"I think people are tired of the meanness, the sheer vicious mendacity of the Trump regime," she said.

Spottswood is a committed Democrat, and polling shows the president's response isn't resonating with Democrats or independents. A new NPR/PBS Newshour/Marist poll finds two-thirds of Americans think the president has made racial tensions worse since Floyd was killed.

Still, despite those numbers, some Republicans remain satisfied with how he's handling the situation.

"I think he's done a good job," said Erin Decker, chair of the Kenosha County Republican Party. "He came out and supported the protests, admonished the rioters and the looters." 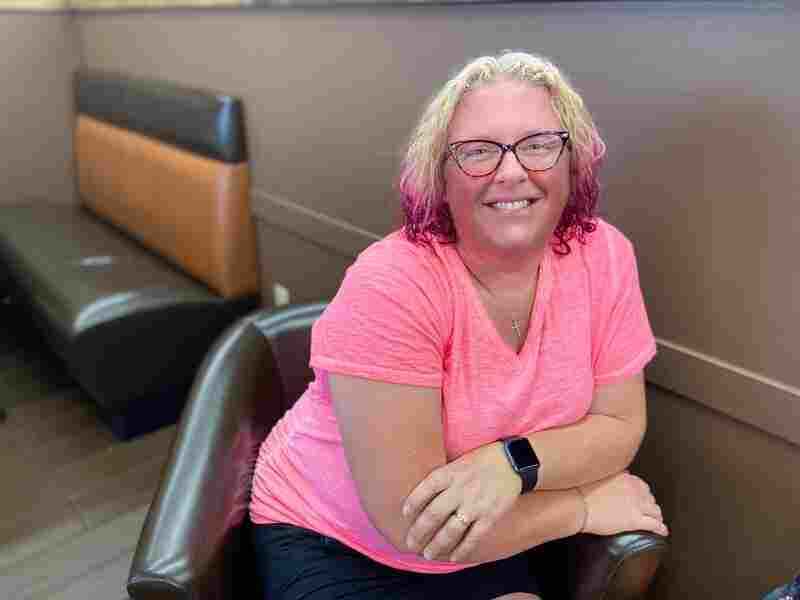 Erin Decker is chair of the Republican Party in Kenosha County, Wis., which broke for President Trump by less than one half of 1% in the 2016 election. Asma Khalid/NPR hide caption 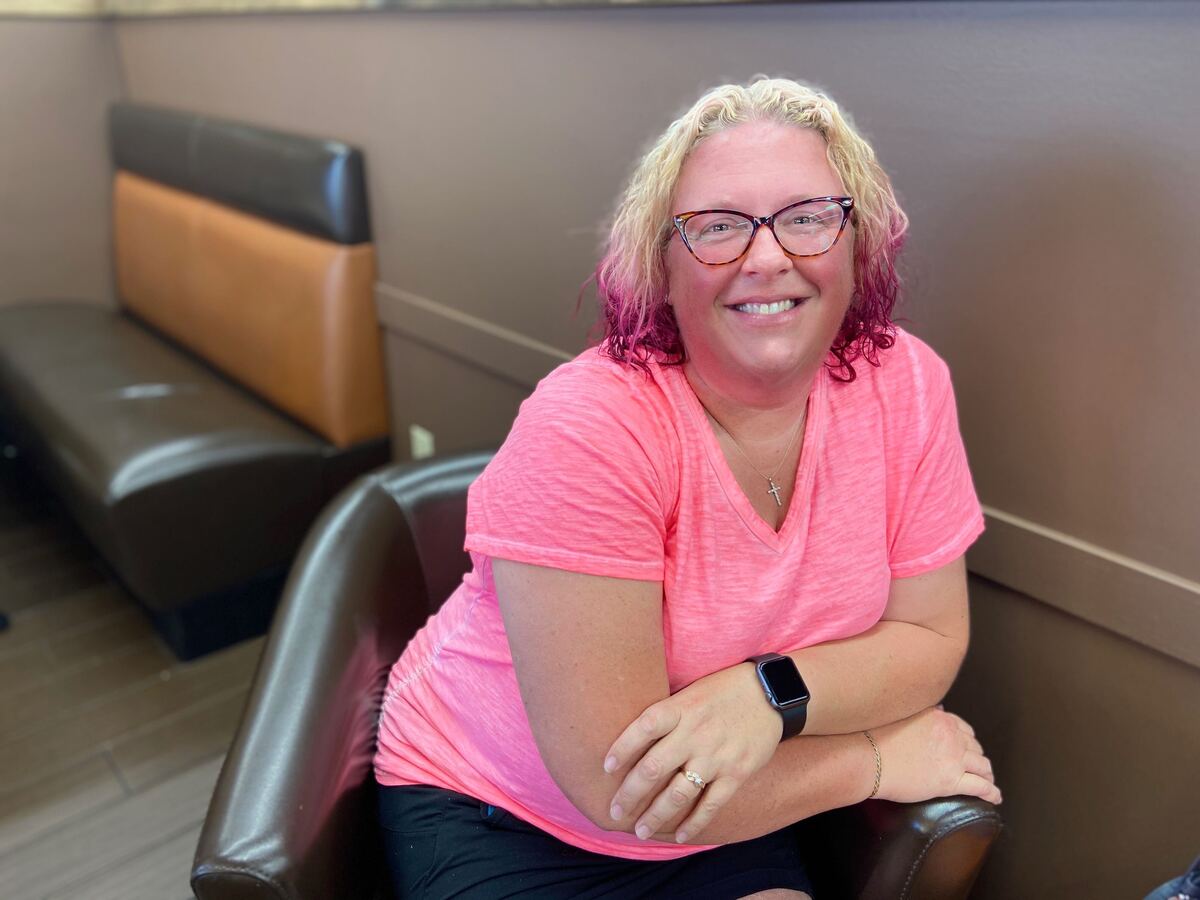 Erin Decker is chair of the Republican Party in Kenosha County, Wis., which broke for President Trump by less than one half of 1% in the 2016 election.

Decker said she didn't know the specifics of the incident on Monday evening when law enforcement forcefully cleared out peaceful protesters near the White House so the president could walk to a church for a photo op, but she defended the president's decision nonetheless.

"You can't allow the people that have infiltrated the peaceful protest to turn it into riots and looting," she said.

And so, Decker thinks maybe the president had to act preemptively.

While the president's polling with older voters has dipped as a result of how he's handled the coronavirus pandemic, his law and order message may rally back his his base of older, white voters.

66-year-old Meg Marshall was packing groceries into the trunk of her car, wearing a face mask, when she stopped to explain that she thinks the president could have handled the pandemic better by acting sooner, but she praised him for his response to the protests.

"Honest opinion, I think those people should have been arrested," said Marshall. "There was too much damage done, people got hurt, it was uncalled for."

Even Rodriguez, despite his empathy for the Black Lives Matter movement, defended the Trump's recent behavior.

"What the message he's trying to get along is, you can be upset about the death of Mr. Floyd, but that doesn't give you the right to loot and burn your own communities," he said.

McKenzy Castillo, 21, is disgusted by Trump. "He isn't approaching the situation like a president should, as in keeping peace with everyone," Castillo said, as she listened to music and took in drinks with friends on the beach. "He's just making people more angry."

Her friend Amanda Pacheco, also 21, says it feels like the president has focused more on looting than the issue of racism.

"He's insane, tear gassing, he's just meeting them with violence, and what they're trying to do is be peaceful and get their voices heard," said Pacheco. "Either way, even when Colin Kaepernick took a knee — the most peaceful thing ever — it was just a knee. People got so mad at that."

Neither Pacheco nor Castillo intends to vote for Trump in November, but they're not thrilled with presumptive Democratic nominee Joe Biden as their only alternative.

Neither is Scott Robbins, 24. He voted third-party in 2016 and he's "not yet" sold on Biden. But this year, he admits, is different because he's seen Trump in action.

What's unclear is whether this moment convinces voters like Robbins, who desperately want to get rid of Trump, to ultimately line up behind Biden, regardless of how they feel about the presumptive Democratic nominee.

It's a question not just limited to young liberal voters.

"I voted for President Obama. I like what he had to say," said Wendy Schoenke as she walked back to her car in the parking lot of Woodman's grocery market.

"Joe Biden was right underneath him. Will I go that way?" she asked aloud, before answering her own question. "I'm not sure."

Shoenke, who considers herself an independent and doesn't like Trump's tweets, said she's not exactly sure what gives her pause about Biden.

"I don't think he's been out there enough speaking," she said. "You know, I saw him a couple times this week because of everything that's going on, but I feel like let's not wait for something to happen to be out there."