Accessibility links
Amid Brutal Responses To Protesters, Will Moments Of Solidarity Bring Real Change? The sometimes aggressive police responses to anti-police brutality protesters have been punctuated by occasional unity between the two sides. Will those gestures amount to anything substantive?

Listen · 3:53 3:53
Amid Brutal Responses To Protesters, Will Moments Of Solidarity Bring Real Change? 3:53 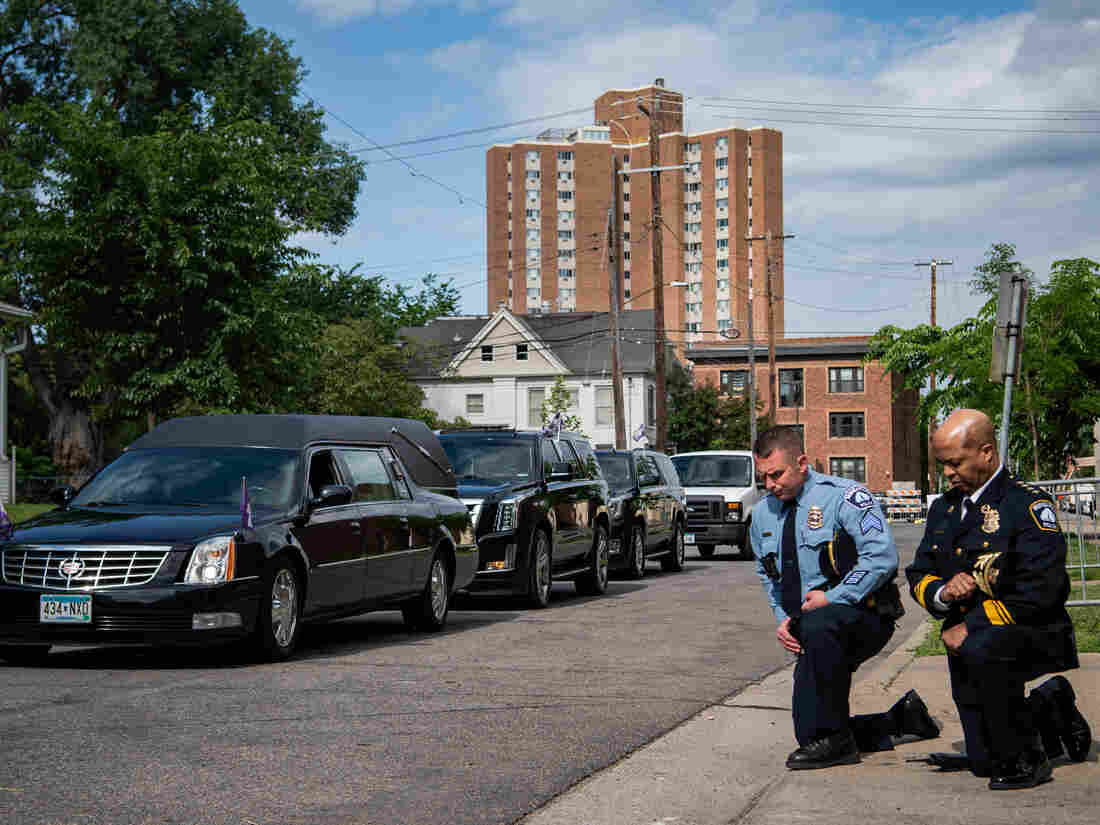 Minneapolis Police Chief Medaria Arradondo (right) kneels as the hearse of George Floyd arrives to North Central University ahead of funeral service on Thursday. Protests in the wake of Floyd's death while in police custody has erupted across the country. Salwan Georges/The Washington Post via Getty Images hide caption 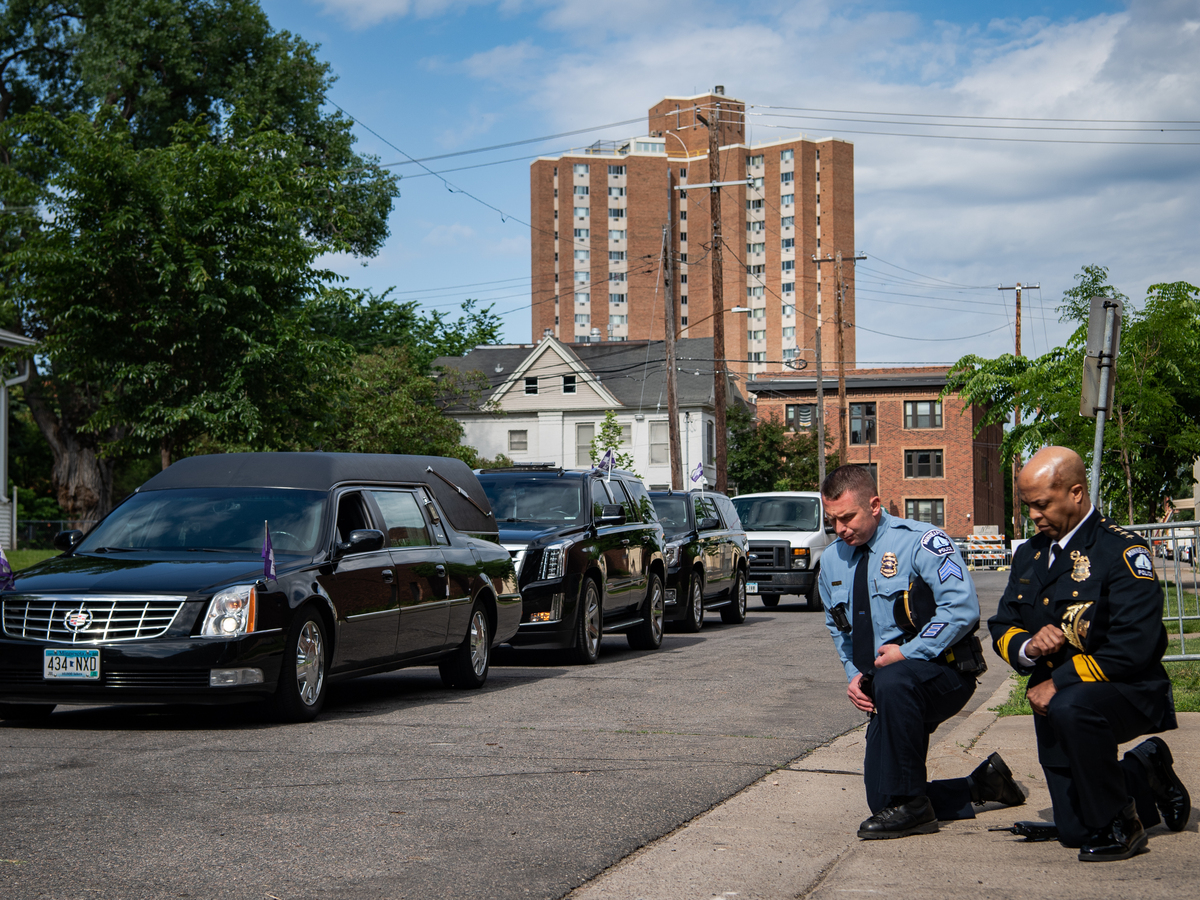 Minneapolis Police Chief Medaria Arradondo (right) kneels as the hearse of George Floyd arrives to North Central University ahead of funeral service on Thursday. Protests in the wake of Floyd's death while in police custody has erupted across the country.

The nationwide demonstrations in the wake of George Floyd's killing have been met at times with heavy-handed police tactics that include beatings, the use of tear gas and rubber bullets fired into crowds.

Examples include the tasing and assault of two college students in Atlanta; the shoving and hospitalization of a 75-year-old protester in Buffalo, N.Y.; Philadelphia cops beating student protesters with batons; and the student protester in Austin, Texas, who was critically wounded by a police beanbag round that fractured his skull.

But the clashes also have been punctuated by fleeting gestures of unity and peace between the two sides.

In a handful of cities large and small, from Miami to Schenectady, N.Y., to Portland, Ore., some officers have knelt in solidarity, and a few have even marched with protesters demanding police reforms.

There are activists who dismiss these moments as merely symbolic, media-savvy moves meant to distract from what they say are the profound structural problems in American policing.

Others, however, say they mark a potentially important opening: the start of a more substantive dialogue.

"Somebody in the crowd shouted, 'They need to kneel, too.' And then they knelt," says Florida activist Oshea Johnson of a recent protest march in Coral Gables, Fla.

The University of Miami sociology graduate student, and first-time protest organizer, says he was taken aback when scores of Miami-Dade County Police leaders and some rank-and-file officers quietly and spontaneously took a knee with the 300 or so protesters who'd marched to City Hall.

"That moment was very powerful for me," Johnson says, "Like my eyes teared up. It was this moment of 'I'm with you. I feel your pain.' And maybe, even if not all the chiefs, you know, felt that way, I think that it was a moment of humility, of humanity. I think that's what made it powerful. I tried to embrace that moment because I'd never seen that happen." 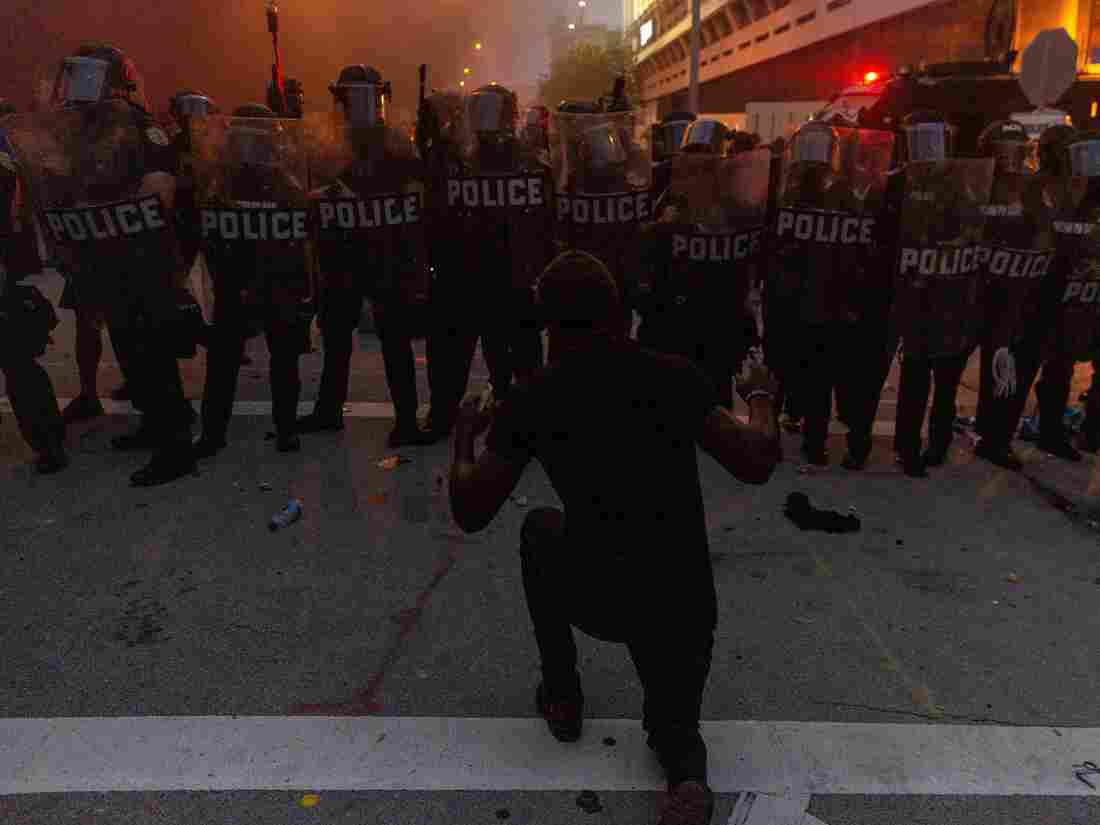 A protestor kneels and raises his hand in front of a line of riot police during a protest against police brutality in Miami on May 30, in response to the recent death of George Floyd, an unarmed black man who was killed by police. Adam Delgiudice /AFP via Getty Images hide caption 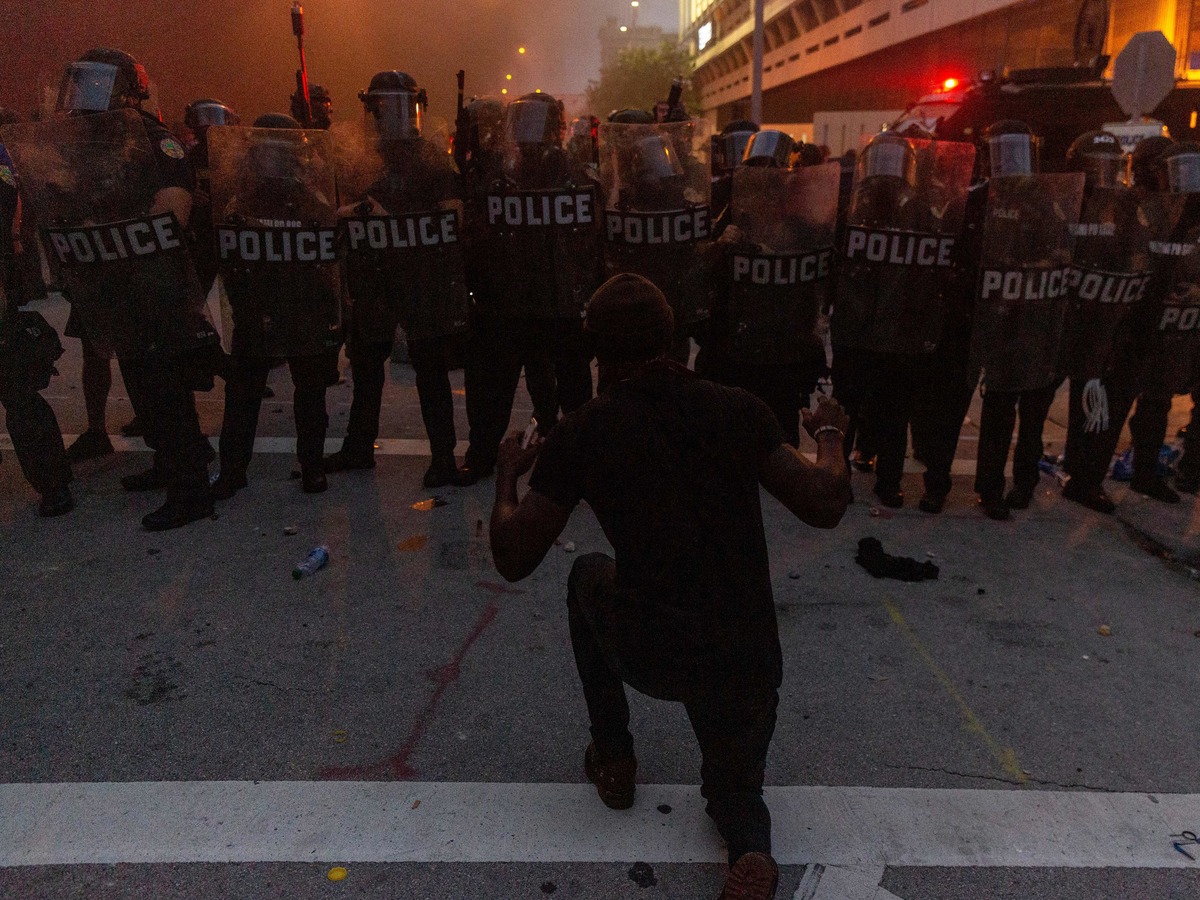 A protestor kneels and raises his hand in front of a line of riot police during a protest against police brutality in Miami on May 30, in response to the recent death of George Floyd, an unarmed black man who was killed by police.

Was it genuine? It's led to virtual meetings set up by police leaders with activists, civil rights groups and others to hear them out about community and police concerns.

It's a start, Johnson says.

"We knew that we had to follow-up," he says. "We want to keep not only the conversation going, but trying to push for reform because we think the time is at its peak right now where we can really try to push for the reforms that we want."

But elsewhere many activists are skeptical, especially given the ongoing harsh police responses to largely peaceful protests. They see the take-a-knee-in-solidary gestures as emotionally manipulative and largely meaningless.

"When the police take a knee, not only do I not take it seriously, it's disingenuous," says Patrisse Cullors a veteran Los Angeles-based activist and artist who played a key role in founding the Black Lives Matter movement. Cullors has been pushing for years to stop the criminalization of homelessness, the incarceration of the mentally ill, and police abuse of power.

"We need radical shifts, we need transformation," Cullors tells NPR. "These things don't happen through police taking a knee at protests and then right after, they take a knee getting up and tear gassing and rubber bulleting us and beating us with batons." 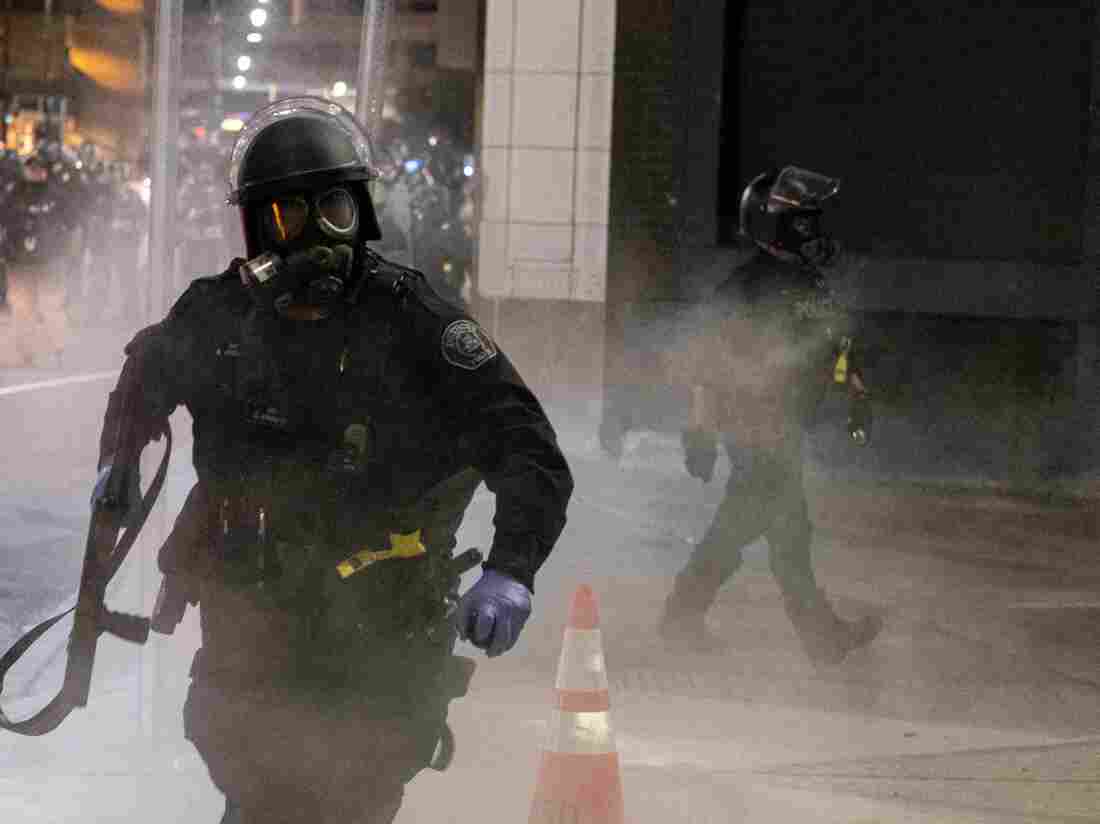 A Detroit Police officer uses tear-gas during a protest in the Detroit, on May 29, 2020. Seth Herald /AFP via Getty Images hide caption 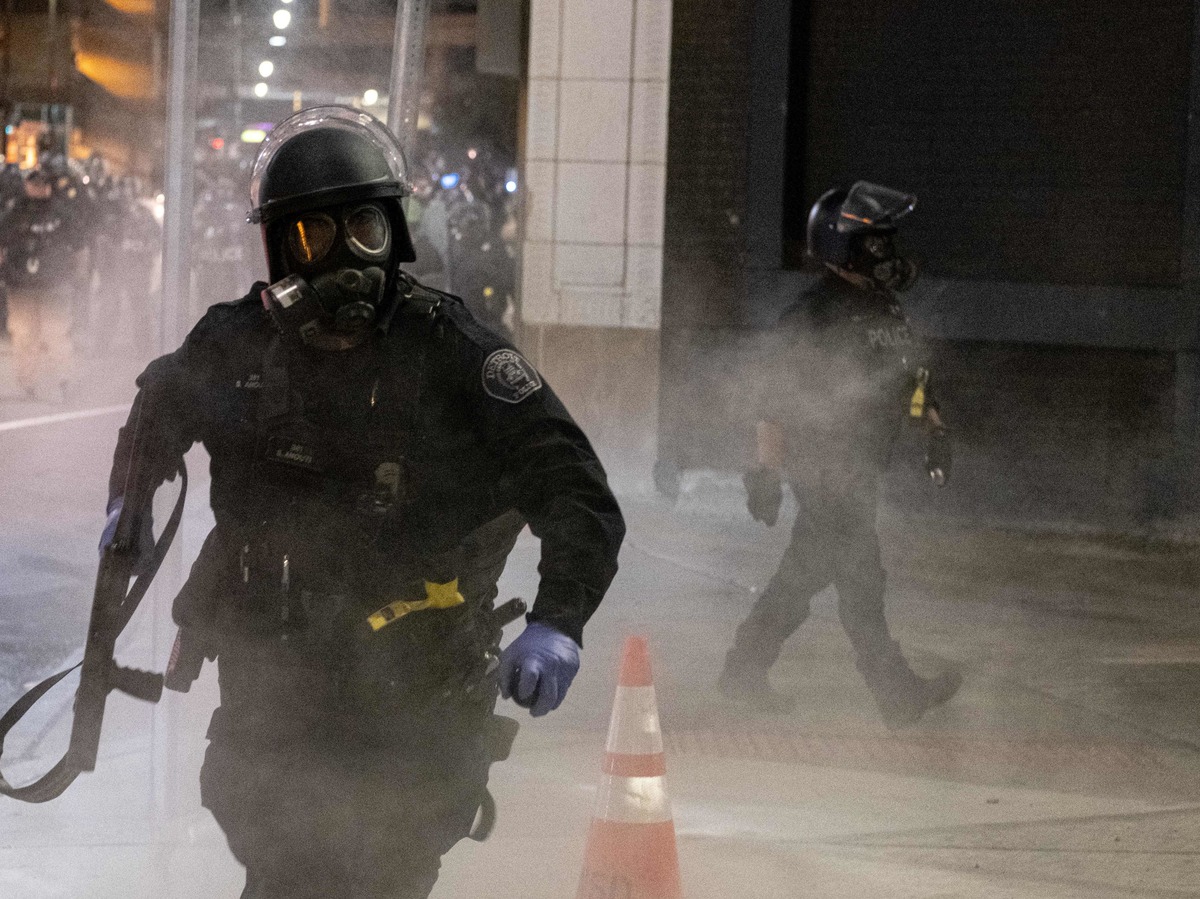 A Detroit Police officer uses tear-gas during a protest in the Detroit, on May 29, 2020.

In a few instances, the police gestures have gone beyond taking a knee.

A powerful moment of police-protester unity was when the sheriff of Genesee County, Mich., which includes Flint, told protesters his officers aren't like those four Minneapolis cops who are accused of killing George Floyd.

Last weekend Sheriff Chris Swanson took off his helmet, his officers put down their batons, and he addressed the crowd.

"We wanna be with you all for real," he told marchers. "I want to make this a parade, not a protest!"

Swanson then asked the crowd, "tell us what you need us to do?"

So Swanson and several of his officers did just that.

He believes that moment, for Flint, Mich., anyway, will prove to be a break through. Swanson says that moment has already changed the way he runs his agency.

"We need to reform modern day policing like it's never been done before," he says. "We can't just have a one night and then be done and go back to where it used to be and continue to give empty promises."

He has already met with reformers to start talking through what needs to change and how to do it. And he's pledged to meet with them weekly.

The sheriff believes Floyd's death "changed American policing forever because I believe there are great police leaders and police agencies who never want to see these dark days again."

But Floyd's death hasn't changed anything substantially about policing, yet.

Advocates say whether it does depends on the collective political and moral will to move beyond that familiar cycle of aspirational reforms – calls for better training, screening and oversight – that have too often failed to stop some cops from humiliating, abusing or killing minorities.