Accessibility links
Protests Continue In Cities Across The Country Saturday Cities from San Francisco to Philadelphia saw anti-police brutality and Black Lives Matter protests for the second weekend since the killing of George Floyd sparked outrage across the world. 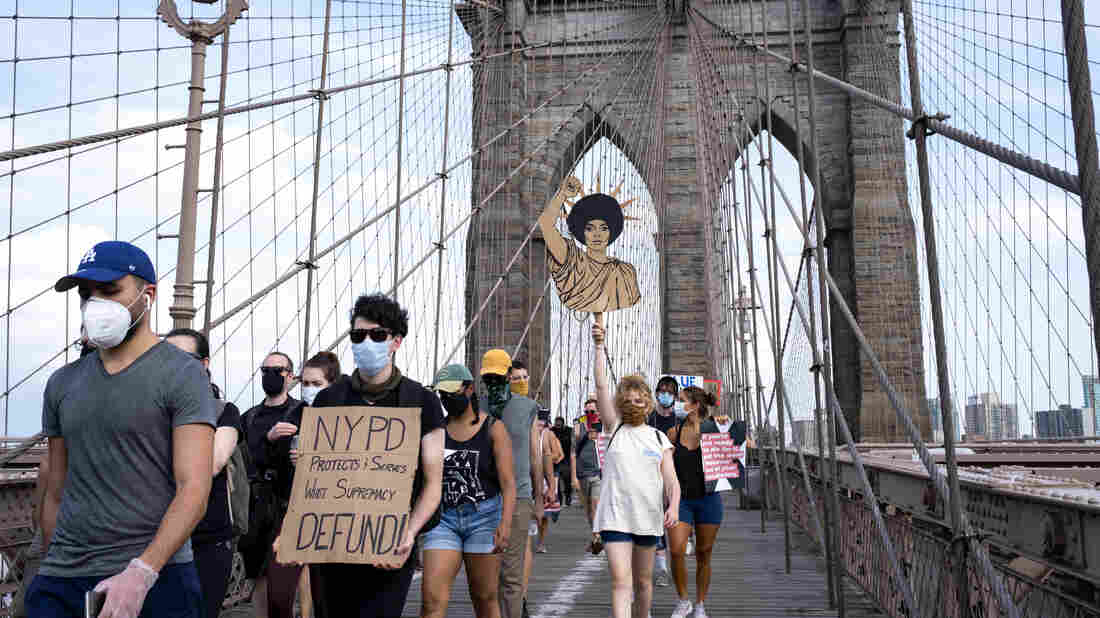 Protesters and activists walk across the Brooklyn Bridge Saturday in New York. Cities saw some of their biggest gatherings of the past two weeks on Saturday. Craig Ruttle/AP hide caption 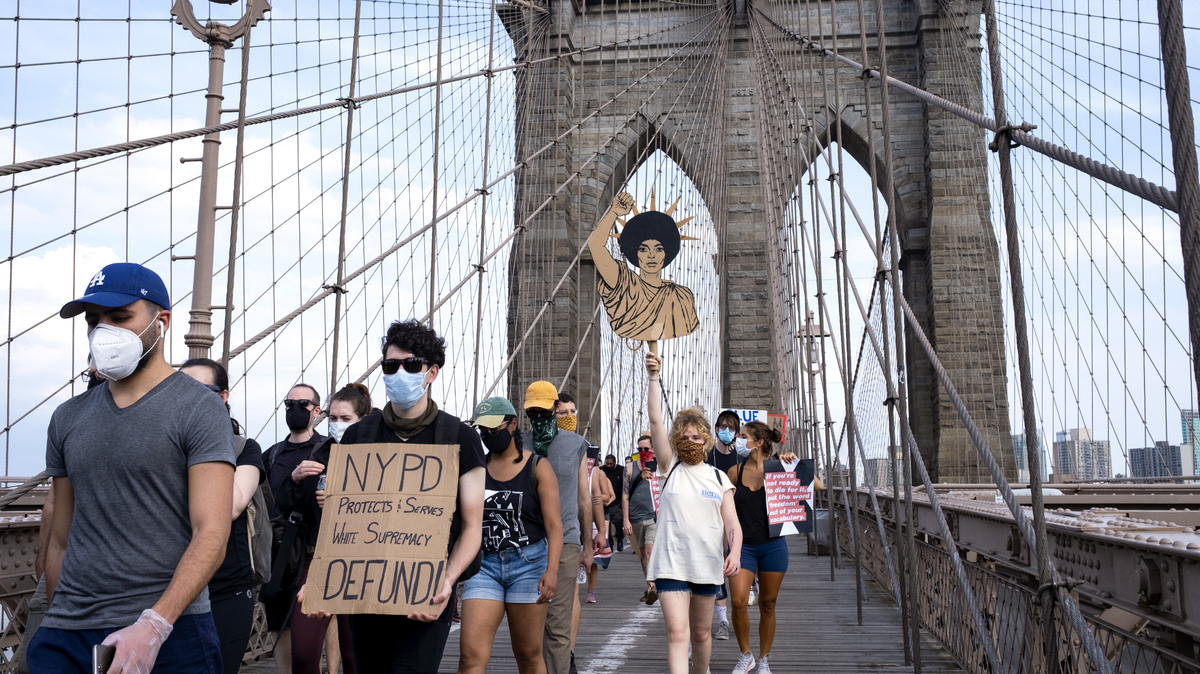 Protesters and activists walk across the Brooklyn Bridge Saturday in New York. Cities saw some of their biggest gatherings of the past two weeks on Saturday.

The flame ignited by the police killing of George Floyd in Minneapolis still burned bright in cities across the country Saturday as largely peaceful anti-police brutality and Black Lives Matter protests continued with some of their biggest crowds yet.

In addition to the massive crowds that gathered in Washington, protesters in cities from Philadelphia to San Francisco are calling for racial justice and pressuring local officials to defund police departments in the second weekend of demonstrations since Floyd's death.

Protests sprawled across New York City Saturday as thousands gathered from Manhattan to Brooklyn to demand an end to police brutality.

One protest, called The March for Stolen Lives and Looted Dreams, marched more than 100 blocks from 110th & Central Park West to Washington Square Park, convening thousands to demand that Mayor Bill De Blasio defund the New York Police Department, according to a Facebook event page for the demonstration.

De Blasio has been criticized for continuing the city's curfew and standing behind police actions, even as videos of police cars running over protesters sparked outrage online.

"Time after time, these cops get away with it for the most part, so we want some change," one protester called Robel, who would only identify himself by his first name for fear of retaliation, told NPR.

The city where George Floyd died at the hands of police saw another day of protests Saturday, as thousands gathered in a peaceful rally to demand the defunding of the Minneapolis Police Department.

Minnesota Representative Ilhan Omar spoke at the rally, saying diversity training is not enough to erase systemic racism in policing.

"We've all seen what happens when good people of good conscience say, 'Let's invest in diversity training.' Maybe if we teach them that just because I am a different color and a different gender, maybe they'll treat me kinder," Omar said. "Let's try to explain our humanity and make them see us as dignified people. Maybe that will stop them from killing us."

We are done explaining our humanity, while more unarmed black bodies are killed in the streets or in their homes.

We need to rethink our public safety system and build one based on compassion. https://t.co/0YxinzYaEW

Minneapolis Mayor Jacob Frey was met with a chorus of boos at a rally near his home after he said he would not commit to abolishing the city's police department.

Videos on social media show Frey addressing protesters. "I know there needs to be deep-seated structural reform in terms of how this department operates," he said. "The systemic and racist system needs to be revamped. The police union needs to be put in its place."

When asked by a protester if he would commit to defunding the police department, Frey shook his head. Protesters booed him as he walked away. Some also chanted "shame" and "Go home Jacob, go home."

Philadelphia saw its largest protests yet Saturday, when thousands of demonstrators marched past various city landmarks in peaceful rallies against police brutality.

More than 14,000 responded to a Facebook event page for a march from the iconic Philadelphia Art Museum to City Hall organized by the city's branch of the Party for Socialism and Liberation. Organizers demanded that Mayor Jim Kenney and the city council defund the Philadelphia police and that Police Commissioner Danielle Outlaw resign, according to the event description.

Those demands come after widespread backlash to videos of Philadelphia police unleashing tear gas on protesters cornered on a highway during a demonstration Monday, member station WHYY reported.

Both Police Commissioner Outlaw and Mayor Kenney kneeled with protesters at Saturday demonstrations, the Philadelphia Inquirer reported, but the mayor has not called off the city's curfew, which resumed Saturday night at 8 p.m. and will last until 6 a.m. Sunday morning.

This week has been humbling. It has shown me—someone who considers themselves to be progressive and an ally—that there is a great deal more for me to learn.

Black voices have been silenced for too long. We must hear those voices and act on their demands.
#BlackLivesMatter pic.twitter.com/I3r4JDqm1h

Demonstrators in Chicago gathered in the city's Union Park for a rally against police brutality that led into a march on the city's West Side, The Associated Press reported.

Estimates from police and organizers put the rally's turnout between 20,000 and 30,000 people. Police said Saturday afternoon there had been no arrests at the peaceful protest, The Washington Post reported. 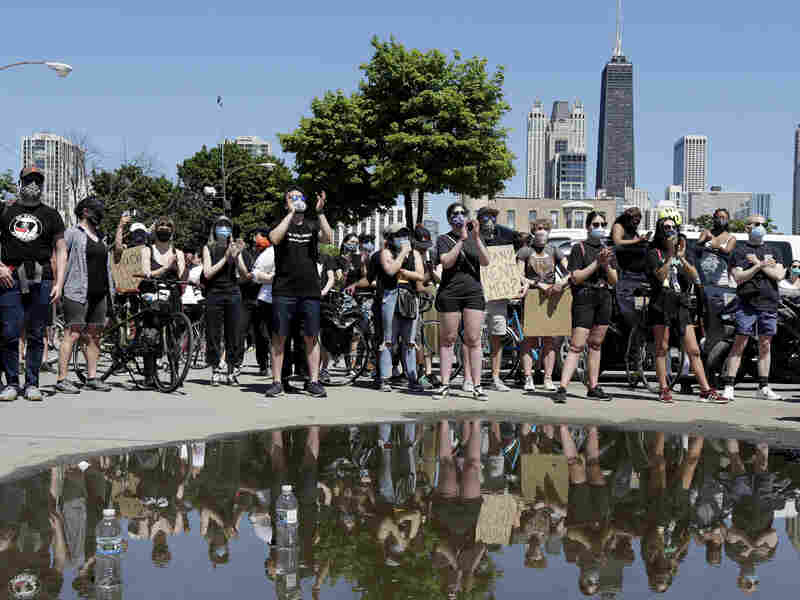 Demonstrators listen to a speech during the Chicago March for Justice in honor of George Floyd in Chicago Saturday. Nam Y. Huh/AP hide caption 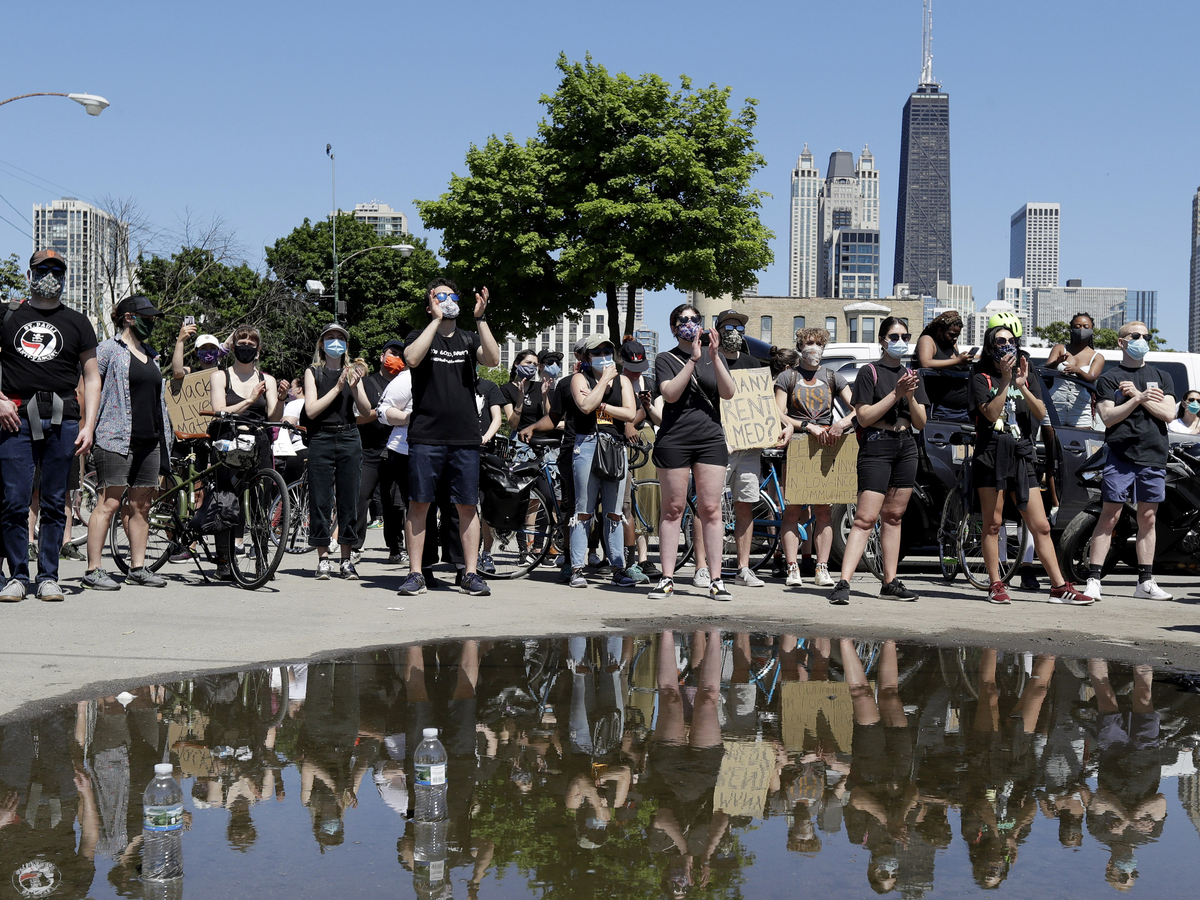 Demonstrators listen to a speech during the Chicago March for Justice in honor of George Floyd in Chicago Saturday.

Mayor Lori Lightfoot had previously shut down parts of the city's Lake Shore Drive to facilitate protests and set a 9 p.m. curfew for the city, the Chicago Tribune reported.

The Union Park rally came just after the Chicago Teachers Union held a march with students and other organizations to announce its support of the effort to remove police officers from schools. Districts in several other cities, including including in Minneapolis and Portland, have already moved to cut ties with police (often called "resource officers") in schools. 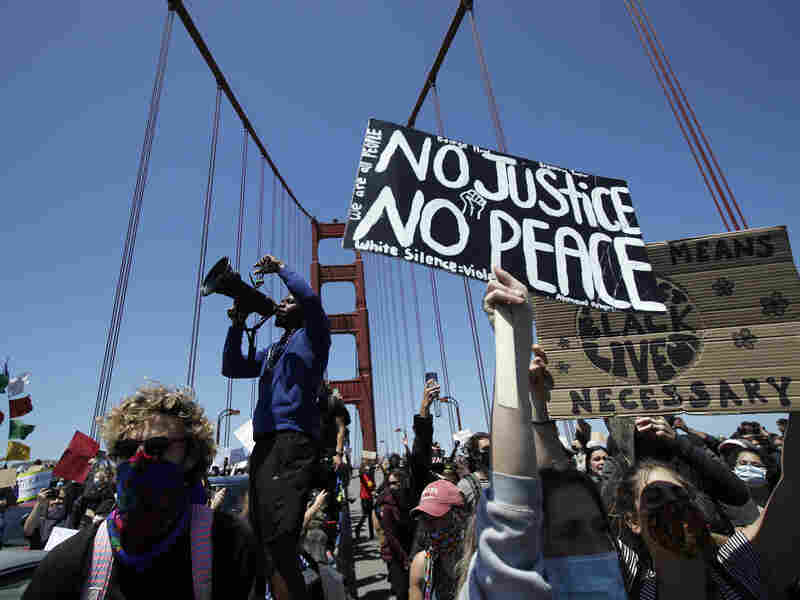 A man speaks into a megaphone while standing with others on the center divider as traffic is stopped on the Golden Gate Bridge in San Francisco Saturday. Jeff Chiu/AP hide caption 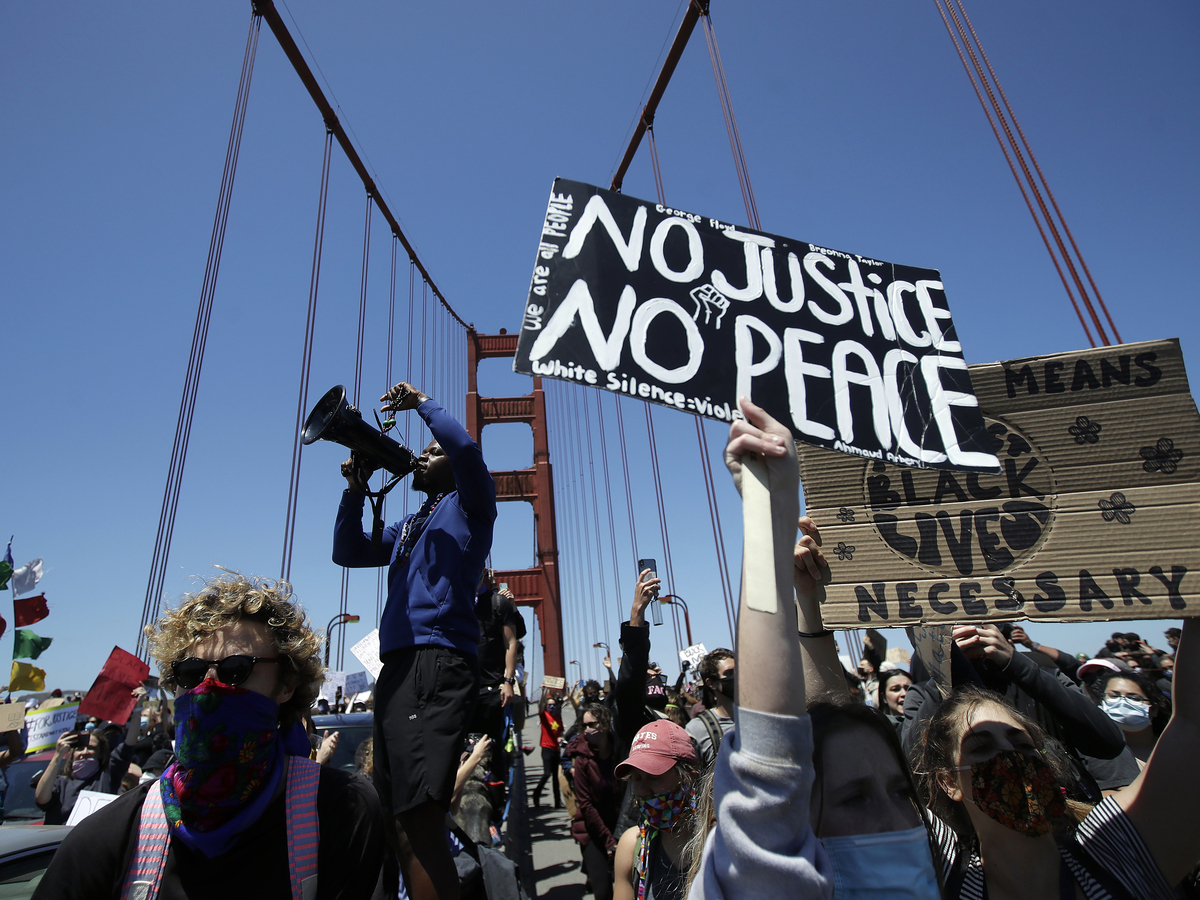 A man speaks into a megaphone while standing with others on the center divider as traffic is stopped on the Golden Gate Bridge in San Francisco Saturday.

Several Bay Area labor unions also joined to host a racial justice march called "Taking A Knee For Change" that convened in San Francisco's Candlestick Park, once home to the city's football team, the 49ers. The march, though dedicated to the recently killed George Floyd, Breonna Taylor and and Ahmaud Arbery, was also an homage to the NFL racial justice protests started by then-49ers quarterback Colin Kaepernick, said organizers.

"We are taking a knee to amplify the voice of oppressed people just like Colin did," said union member Derrick Boutte in a statement, according to member station KQED.

Demonstrators in Seattle gathered in several areas around the city, including Capitol Hill and the police department's East Precinct, the Seattle Times reports. Mayor Jenny Durkan and Police Chief Carmen Best announced a temporary ban on the use of tear gas on Friday, joining several other cities in their decision.

#WhiteCoatsForBlackLives The future of medicine should always fight for justice. Not just today. But every day pic.twitter.com/mwxrZLj9q7

Demonstrations were largely peaceful during the day, but police and protesters clashed as night fell.

Seattle police said in a tweet that items they called "improvised explosives" were thrown by demonstrators, injuring "several officers." The department said the incident took place as protesters were trying to move barricades at 11th and Pine Streets despite police commands to stop.

At about 7:30 p.m. demonstrators outside the East Precinct began moving barricades at 11th and Pine despite multiple requests from police to stop. Individuals began throwing rocks/bottles/and explosives at officers. Several officers injured due to improvised explosives. pic.twitter.com/cbW6hWhIvy

However, others in the area said police had "escalated a peaceful protest" by using flash bangs.

Seattle City Council President Maria Lorena González called for the use of flash bangs and pepper spray to "stop immediately," and said such actions would "erode community trust."

I'm hearing disturbing reports from protestors & social media of pepper spray and flash bangs being used earlier this evening. This only continues to erode community trust and it is NOT acceptable. @carmenbest @MayorJenny this must STOP IMMEDIATELY. https://t.co/KxxF8VXVBh

Protesters in Portland gathered at Revolution Hall and marched across the city. Demonstrations also took place at the Multnomah County Justice Center, which houses the county jail and police headquarters.

Police said hundreds were still gathered at the Justice Center Saturday night. Demonstrators have gathered there every night since protests began in the city. Last Sunday, a small fire was lit inside the building. As with other nights, police later declared an unlawful assembly.

It has been 20 minutes since we declared this an unlawful assembly and civil disturbance and told the crowd to disperse. The large majority has remained and is throwing projectiles at officers, including balloons filled with paint.

More than one thousand protesters gathered in Saginaw, Mich., a city of less than 50,000 for a Black Lives Matter rally Saturday, according to MLive. Protests against Floyd's death also convened today in Elizabethtown, Penn., a borough of fewer than 12,000 residents, PennLive reported. In Meridian, a small Mississippi city, NBC affiliate WLBT reported that hundreds joined a peaceful march against police brutality and racial injustice, holding signs and chanting, "I can't breathe, breathe through me, justice and peace, we will see."

According to a USA Today protest tracker, there have been demonstrations in response to George Floyd's death in all 50 states.

NPR's Brian Mann and Leila Fadel contributed to this report.