Accessibility links
With Pandemic, Communities See Millions for Wildfire Prep Disappear Communities were counting on historic levels of funding to prepare for climate change-driven disasters. Now, efforts are on hold. 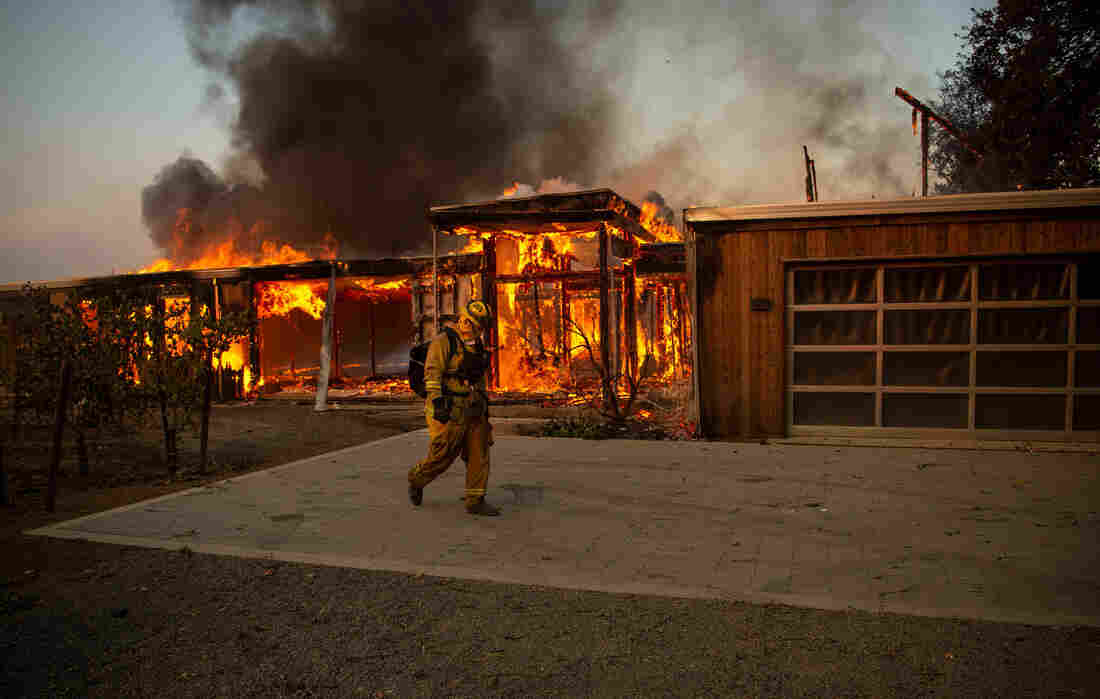 After a series of devastating wildfires, like the 2019 Kincade Fire, California had planned on spending billions to prepare for climate-driven disasters. Josh Edelson/AFP via Getty Images hide caption 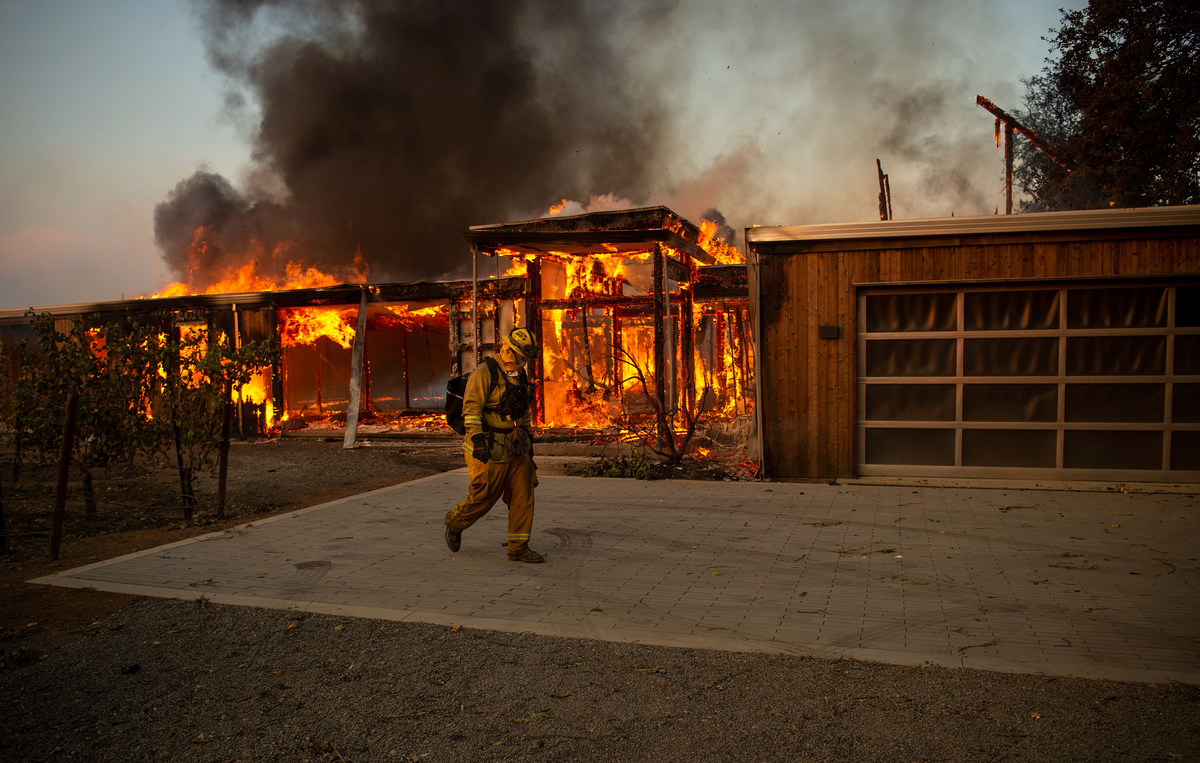 After a series of devastating wildfires, like the 2019 Kincade Fire, California had planned on spending billions to prepare for climate-driven disasters.

With the coronavirus pandemic eroding state budgets across the country, many communities risk having this disaster make them less prepared for looming climate-driven disasters.

Still recovering from devastating wildfires, California was poised to spend billions of dollars to prepare for future fires and other extreme weather disasters. The infrastructure projects, designed to make communities and homes more resistant to wildfire, have long been overlooked, fire experts say.

But with a $54 billion budget deficit, the programs are being put on hold.

"It's really a shame," says Alexandra Syphard, a fire scientist at Sage Underwriters, a wildfire insurance company. "Obviously COVID has been a shame on so many different levels. We were ramping up to provide what I believe is one of the most progressive and important investments in terms of fire risk that there could be."

With more than 25,000 homes and buildings lost over the last three years, California has focused recent spending on adding new firefighting crews and emergency response capacity. This year, the state planned on investing in something that could lessen the need for fire-fighting: "hardening" millions of homes to make them more resistant to burning.

Similar home-retrofitting programs, piloted in communities around the state, have been very popular.

"Up here in the mountains, a wood-shingled roof is another name for a matchbook," says Bill Seavy, a homeowner in South Lake Tahoe.

Until a few years ago, Seavy had a wood-shingled roof, but he replaced it through a program that incentivized homeowners to install fire-resistant roofing. The local fire agency, the Lake Valley Fire Protection District, created the program after the 2007 Angora Fire, which destroyed almost 300 buildings and homes in the region.

"In Lake Tahoe, we're vulnerable, and there's three million people in California that live in areas like this where you're vulnerable," says Seavy. "So we've got to do everything we can."

Through federal funding from FEMA, homeowners could get 70 percent of their cost covered for a replacement roof. Wood roofs can fuel the spread of wildfires by catching burning embers.

"Most homes are not burned by fires just marching up to them and burning them down," says Syphard. "Most are destroyed because the fires are occurring during really high wind conditions and there tend to be these burning embers that can fly kilometers ahead of the fire front. And it's these burning embers that tend to get into all the little nooks and crannies of a house."

Even small fixes to a house can make a big difference, like putting mesh screens on attic vents or covering the eaves under a roof.

"Things that in particular would prevent embers from penetrating the house are super significant in making a difference between whether a home survives a fire or not," says Syphard.

Last year, California lawmakers approved the first major statewide program for incentivizing such home-retrofits. In January, Governor Gavin Newsom announced $100 million in state and federal money to help homeowners replace roofs and make their homes more fire-resistant, particularly in low-income communities where upgrades may be out of reach for many.

But in May, Newsom proposed suspending the program, citing the need for deep budget cuts to offset the falling tax revenue from the economic downturn.

"We learned that in the Paradise fires, homes built or retrofitted with home-hardening materials and features often withstood the deadly flames and stood to live another day," says California Assemblymember Jim Wood, who authored the bill to create the program. "It is a sorry state when we refuse to acknowledge the importance, and financial benefits, of investing in prevention." 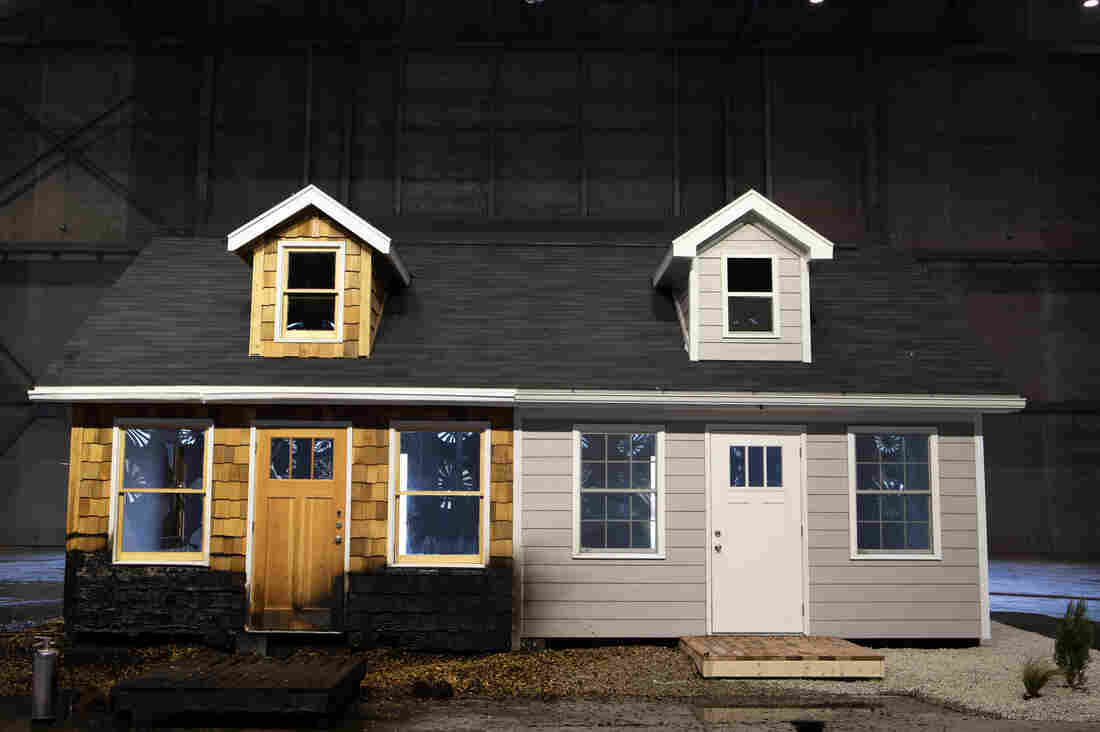 A test house hit by blown embers at a research facility run by the Insurance Institute for Business & Home Safety in South Carolina last spring. Half of the test home has cedar siding and other common combustible building materials. The other half has common fire-resistant materials such as cement siding. Ryan Kellman/NPR hide caption

Two other substantial climate initiatives were also put on hold in the Governor's revised budget, which would have funded projects to prepare for fires, droughts, floods and sea level rise. Those include a $4.75 billion Climate Resilience Bond scheduled for the November ballot and $1 billion in state funding over five years for climate-related projects. State lawmakers are still trying to push ahead with a bill that would put a $7 billion climate and economic recovery bond on the ballot.

The wildfire funding left in California's budget this year will likely go to firefighting and emergency response.

"We're staring down the barrel of another intense wildfire season given how dry it was this winter," says Wade Crowfoot, California's Secretary for Natural Resources. "So we are anticipating actually having to juggle disaster response from different disasters."

Supporters of the resiliency initiatives say spending money to prepare for disasters in advance is substantially more economical than waiting for them to hit.

"A dollar spent today saves you about six dollars in future emergencies," says Kate Gordon, director of California's Office of Planning and Research. "And if you think about that, it's really logical. The cost of emergency response is enormous. Look at Paradise — rebuilding an entire town and relocating folks."

State officials say they're looking for other ways to fund climate preparation in hopes of preserving momentum after the recent disasters.

"We are retooling in real time to really continue to drive forward those same priorities, particularly climate resilience, in a more constrained fiscal environment," says Crowfoot. "Our residents get it. Californians want us actually to do more to protect communities from impacts."

California, like many states, is looking to federal stimulus funding to fill in the gaps, since climate-related projects could qualify as infrastructure spending. They're also looking at partnerships with private industry.

"There is a moment at which this kind of economic disaster creates opportunity for thinking differently about how to build forward," says Gordon. "Not to bounce back, but bounce forward."