Accessibility links
She's A Frontline Doctor. Her Husband Has Lung Cancer. Now, A Simple Hug Is Dangerous When Lauren Jenkins learned a coworker had tested positive for the coronavirus, she did what once would've seemed unthinkable — separating from her two young boys and a husband with stage IV cancer. 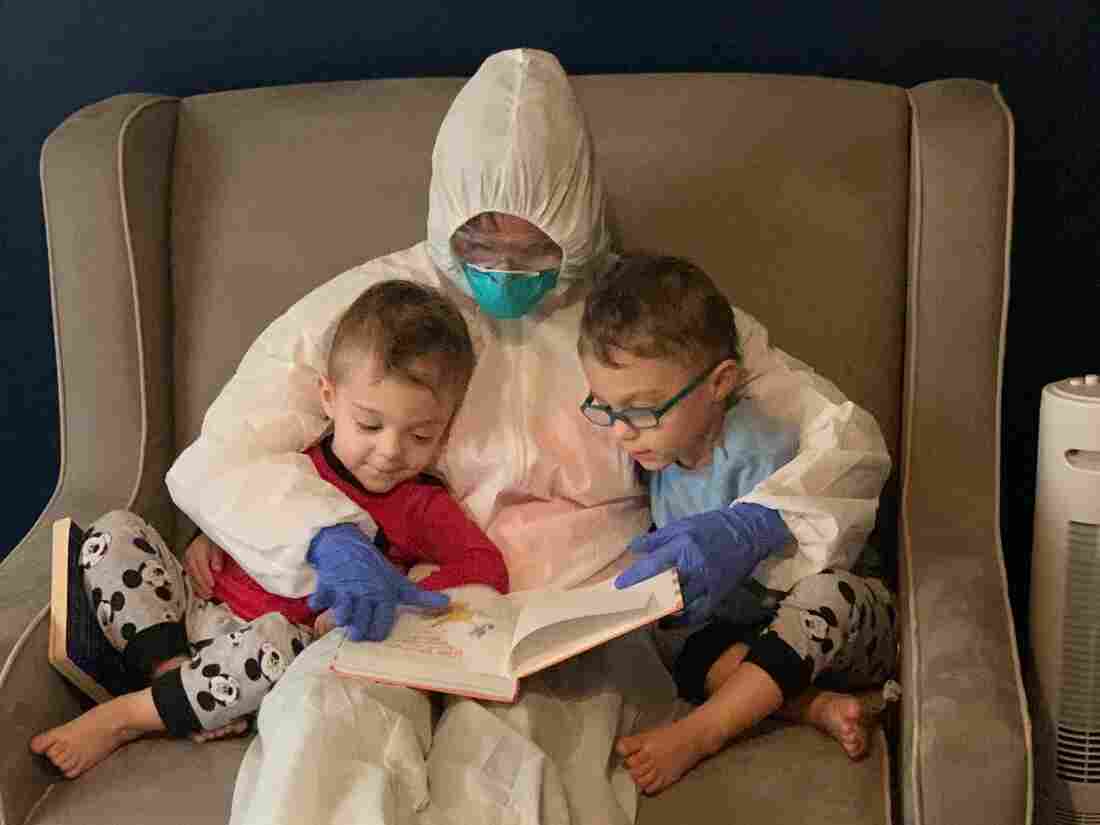 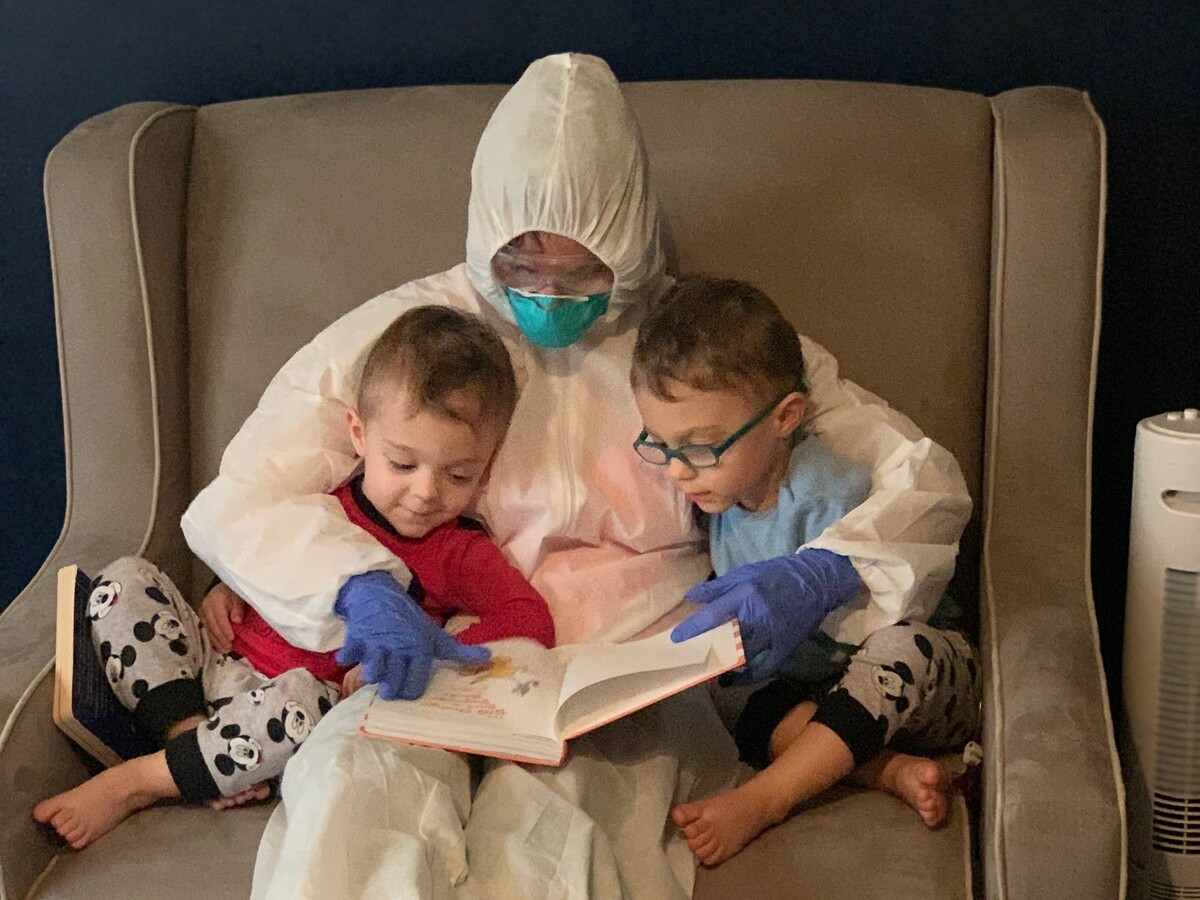 Dr. Lauren Jenkins reads to her twin sons, Pierce and Ashton, while wearing her "hazmat" suit. Because lung cancer has compromised her husband's immune system, Jenkins moved out of her home and visited in the suit as a precaution.

Dr. Lauren Jenkins says her medical training has always taught her to think of the worst-case scenario. And one day this past March, that's exactly where her mind went.

It was early into the coronavirus pandemic. Jenkins, a 37-year-old obstetrician-gynecologist who practices at a hospital in Philadelphia, was cooking for her husband and their nearly three-year-old twins, Pierce and Ashton.

That's when she got a call from a colleague. An anesthesiologist she had worked with during a long surgery about one week earlier had tested positive for the coronavirus.

For any family navigating the pandemic, that call would be alarming. For hers, it was potentially devastating.

Her husband, Jay Roux, 44, has stage IV lung cancer. Every few weeks, he has a needle inserted into his lungs to drain fluid that builds up. Cancer treatments have weakened his heart. And he eats — or, rather, ingests nutrition — through a gastrostomy tube into his stomach. His body's defenses to the coronavirus are severely compromised.

"For Jay to get COVID, it would be catastrophic," Jenkins says.

After learning of her colleague's positive test, Jenkins immediately stopped cooking and rushed to her bedroom, where she locked herself away from the family. She remembers thinking, "Perhaps I had been responsible for exposing Jay to the very thing that would kill him."

Roux brought food to her room on a tray, she says, "and passed it through the door and ran away." When her family had all gone to bed, she put on a mask, grabbed bleach, and wiped down every surface she could find. 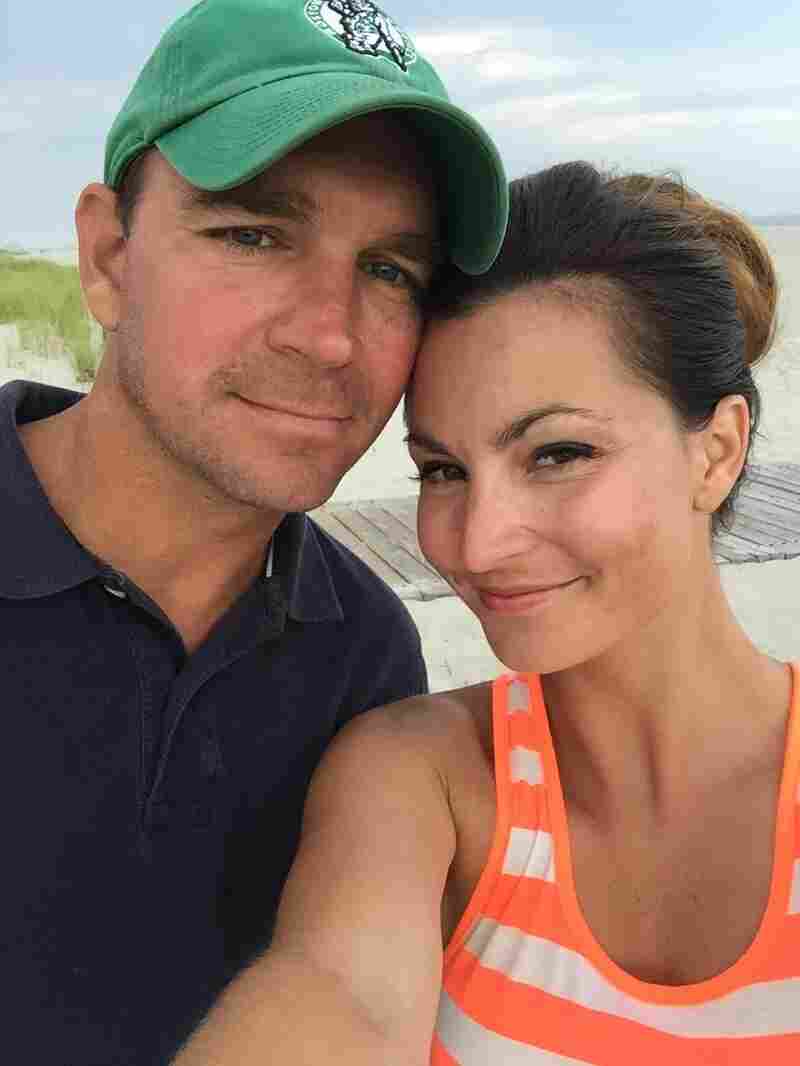 Dr. Lauren Jenkins and her husband, Jax Roux, on the beach in Wildwood Crest, N.J. before the COVID-19 pandemic forced them to live separately. Courtesy of Lauren Jenkins hide caption 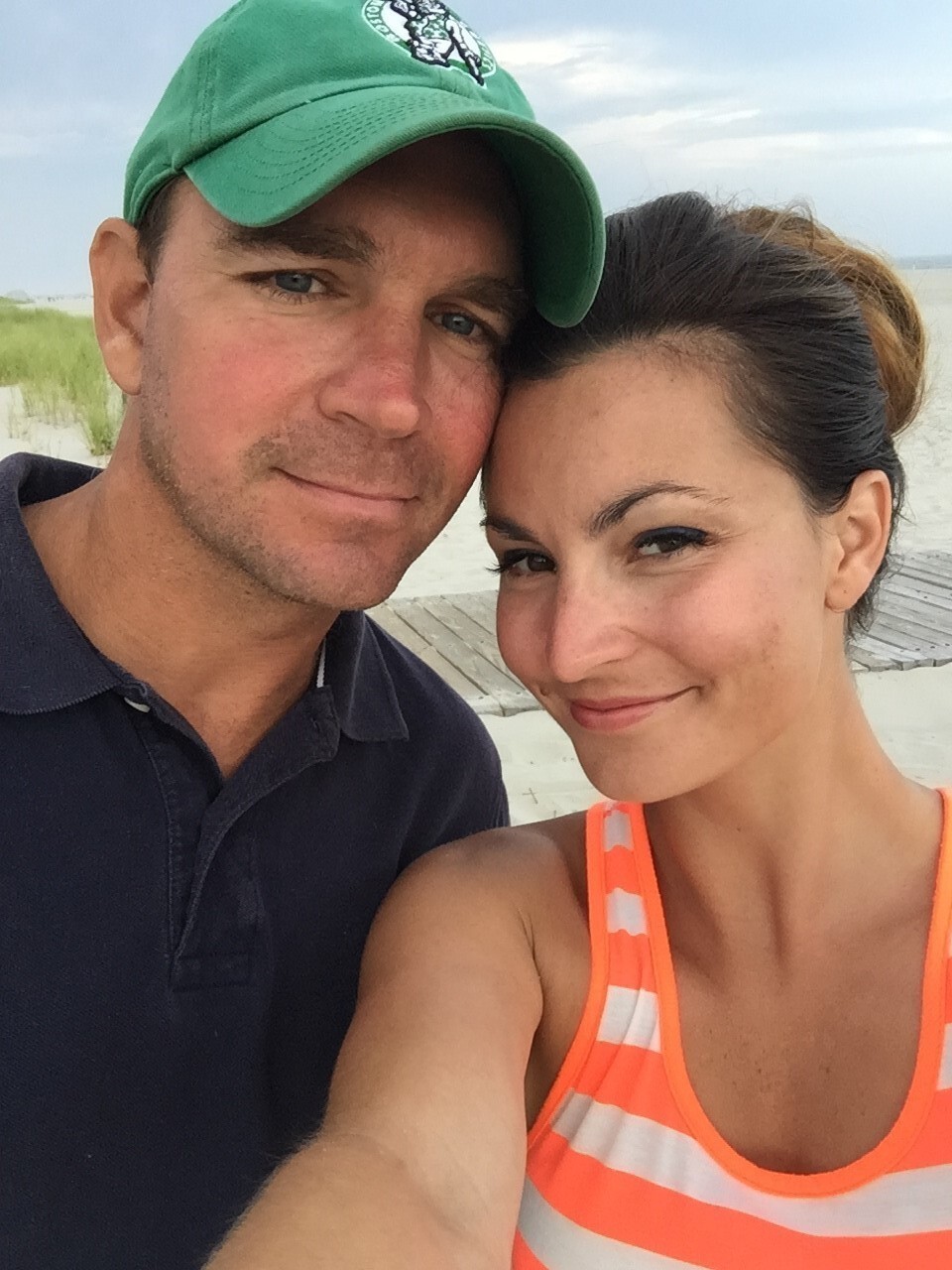 Dr. Lauren Jenkins and her husband, Jax Roux, on the beach in Wildwood Crest, N.J. before the COVID-19 pandemic forced them to live separately.

She wasn't upset with her colleague. He had come to work with mild symptoms, and, in general, doctors are taught to come to work even if they have a regular cold, she says. "Calling out sick isn't really a thing," she says. And it was early into the pandemic, before many health care workers were taking much more stringent precautions.

The next day, Jenkins drove to a testing site, endured the long swab pushed into the back of her nose, and got a test result. It was negative.

It was a massive relief. But she decided that as long as the pandemic dragged on, and as long as she was treating patients with the coronavirus, she could not put her family through that experience again. She would have to move out.

"There can never be a next time," she decided. "I can't take this kind of risk."

At first, her husband argued that the family should stay together at their home in New Jersey. His cancer — and the heart problems from the treatment — make it hard to care for two energetic toddlers, even with the help of an au pair.

He eventually came around. After more than a year of fighting cancer, he says, "it would be stupid" to die from a preventable exposure to the virus. Plus, he told Jenkins, if she did inadvertently pass the coronavirus to him, "I think that you would carry that guilt with you for the rest of your life, and it would eat you alive."

So she moved out, landing in an apartment donated for use by health care workers in Philadelphia, about a half-hour drive from home.

Separating helped reduce Roux's potential exposure to the virus. But it forced the couple to confront questions with no clear answers: With an uncertain prognosis, would the separation waste precious time that Roux has with his family? And if the pandemic continues for a year or more, how long would they live like this?

It didn't take long to discover just how poor a substitute video calls can be for physical contact — the chance to hug each other, or sit and read to their kids together.

The twins had been born prematurely and had subsequently spent months in the neonatal intensive care unit.

"I never missed a single day by their side," says Jenkins. Even afterwards, she hardly spent much time away from them.

In the first weeks away from home, she started to strategize a way to safely visit her family about once a week. After talking with her colleagues who specialized in infectious diseases, she landed on what they call her "hazmat suit."

It's the same kind of suit that might be seen in a high-tech laboratory: a hooded set of white coveralls, gloves, a mask and goggles.

The first moments she stepped foot in the house in the suit were admittedly "weird," the couple says. Their son Pierce is more timid, and wasn't quite sure what to make of the masked figure in the house. 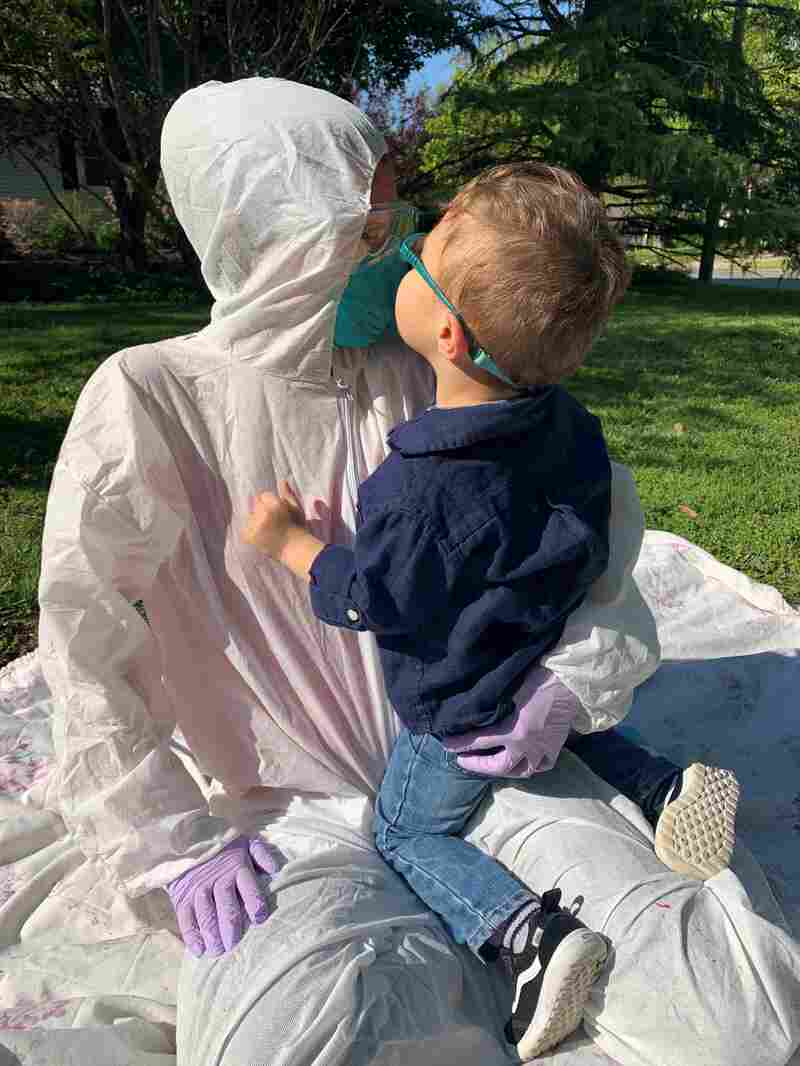 After moving out, Jenkins would visit her husband and kids roughly once a week. Courtesy of Lauren Jenkins hide caption 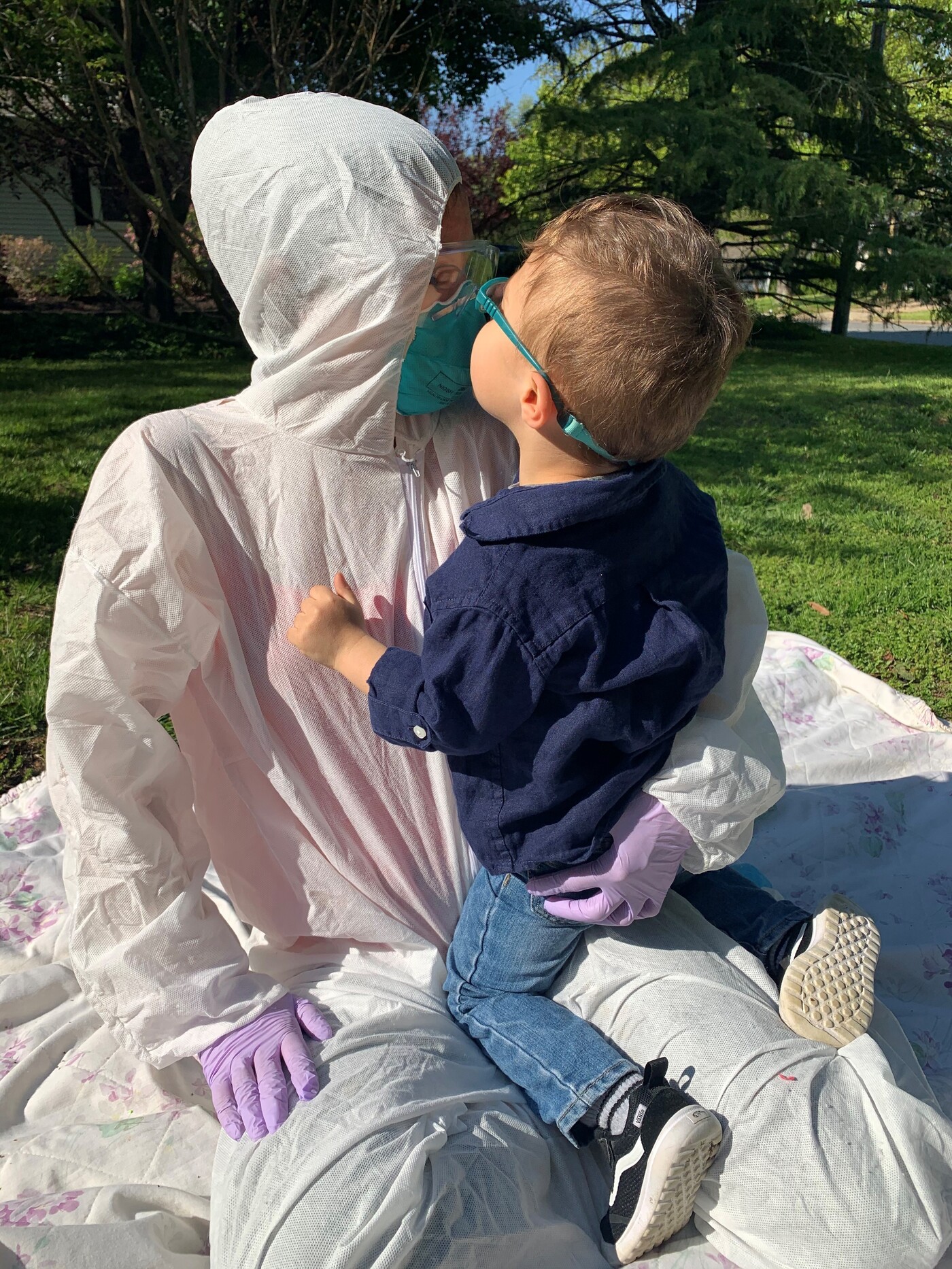 After moving out, Jenkins would visit her husband and kids roughly once a week.

"He didn't instantly run over to me," says Jenkins.

But Ashton immediately jumped into her lap and started comparing "mommy's glasses" — her safety goggles — with his own.

Once Pierce came around, they all read books and played with blocks together.

"Part of what's so cool about kids is that they don't overthink things," she says. "It's like, 'Oh, mom's been gone. But now she's here.'"

"To even give her a hug and hold her for five minutes, it's amazing," says Roux. "Not the real thing, but it's still amazing."

The hardest part were the goodbyes. They decided to put the boys down to sleep before she leaves. That way, "It's not like a big horrible goodbye," she says. "I don't know if it's more for me or for them."

At one point, the family was offered a way out of their forced separation.

Leadership at the hospital told Jenkins they could take her off the frontlines, so she wouldn't have to risk exposure to COVID-19.

But she barely considered the offer before turning it down. Other doctors at her hospital, she says, are older and at higher risk. And she felt the need to contribute during a public health emergency.

"I don't think anyone would've begrudged me," Jenkins says. "But it didn't feel right to me."

She remembers calling Roux soon after. "I was actually a little nervous to tell him that I had said no," she says.

But he immediately told her: I hope you turned down the offer.

"You're a doctor," he recalls telling her. "You provide an amazing service to women. That's your calling. It's what you do." 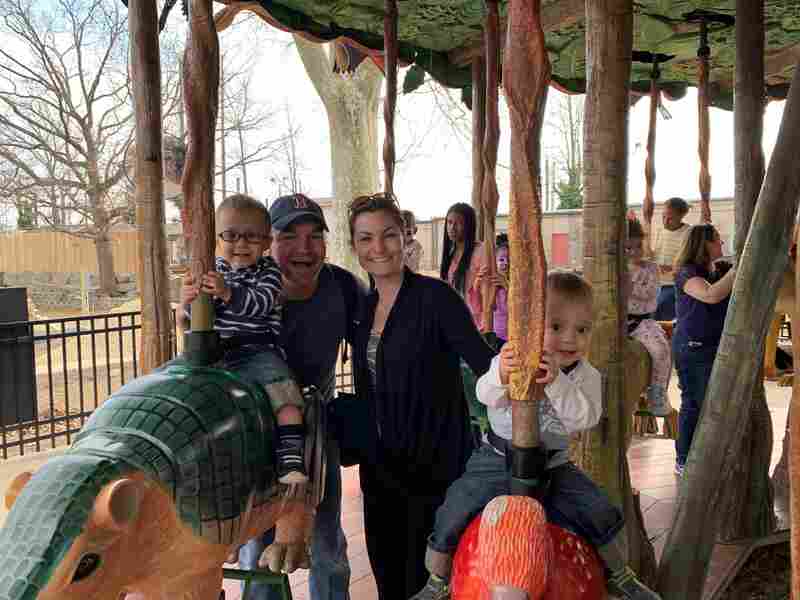 Long before the COVID-19 pandemic, Dr. Lauren Jenkins, her husband, Jay Roux, and their twins, Pierce and Ashton, ride the carousel at the Philadelphia Zoo. Courtesy of Lauren Jenkins hide caption 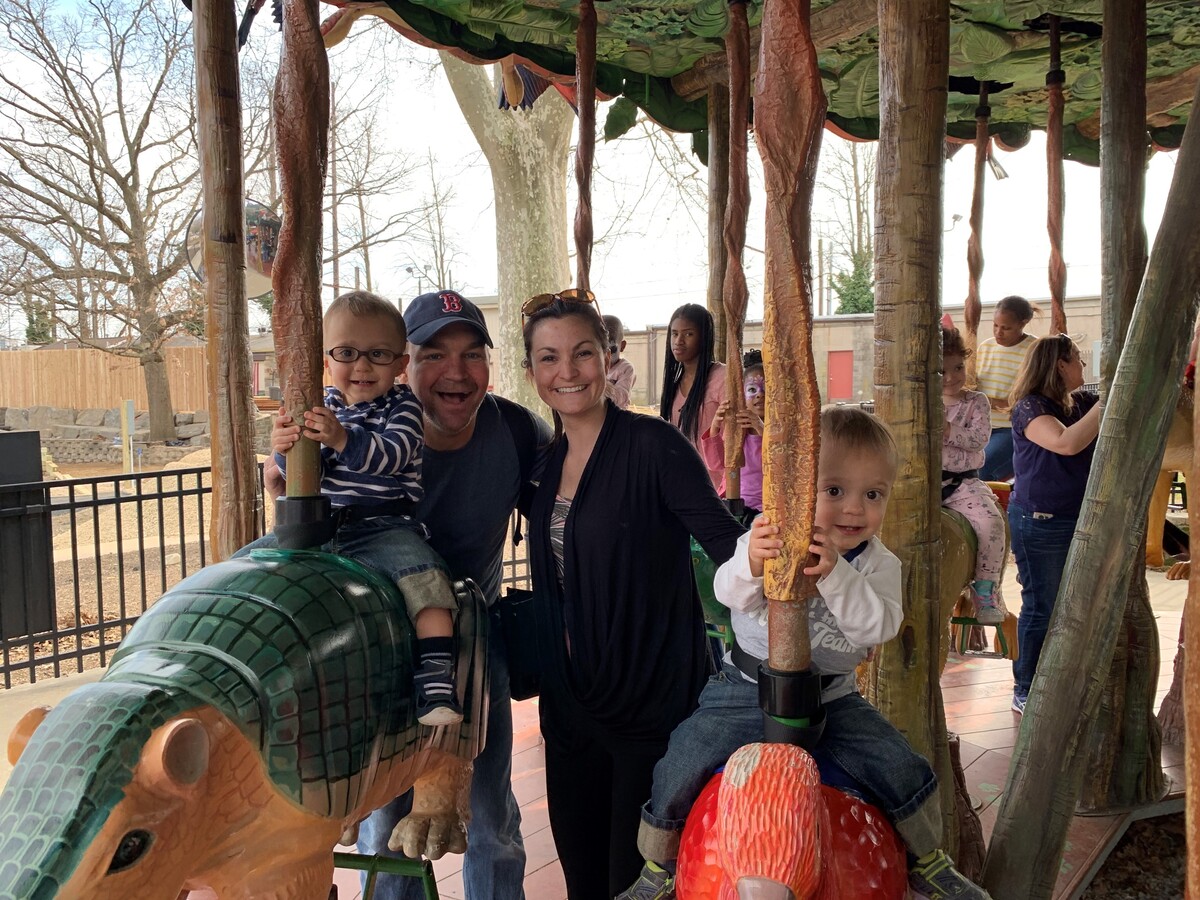 Long before the COVID-19 pandemic, Dr. Lauren Jenkins, her husband, Jay Roux, and their twins, Pierce and Ashton, ride the carousel at the Philadelphia Zoo.

They agree it was the right decision. Still, at times, Jenkins says she feels a creeping sense of "betrayal" by her job. It was hardest that day in March, when she first learned she might have exposed her family. But every now and then it comes back.

"My job is a huge part of who I am. And it's a source of so much of my pride and my joy and my sense of self," she says. "For the first time, I felt like my job was making me choose between my life's work and the wellness of my family."

Roux says his experience with cancer, and their long ordeal with the kids' time in intensive care, has made him a firm believer in the idea that "s*** happens," but you push on.

"I said to Lauren, 'With all the stuff that we've gone through in the last couple of years, this is just a small ripple in the lake,'" he says. "'We just get through it.'"

'Nobody knows when it's going to end'

The day after Mother's Day, the couple decided to switch places. Jenkins was missing the kids, and Roux was struggling to keep up with them.

After talking with experts, they decided that the risk to their kids was low enough that she could return home. But this time, Roux would leave and stay at a family member's spare apartment.

"When she came home, I already had all my stuff packed up in my truck," he says. "She came in through one door and I waved at her and said I loved her and went out the other door."

When the pandemic started, they hadn't really considered that it could go on past the summer. But now they're thinking about what it'll mean to stay apart indefinitely. 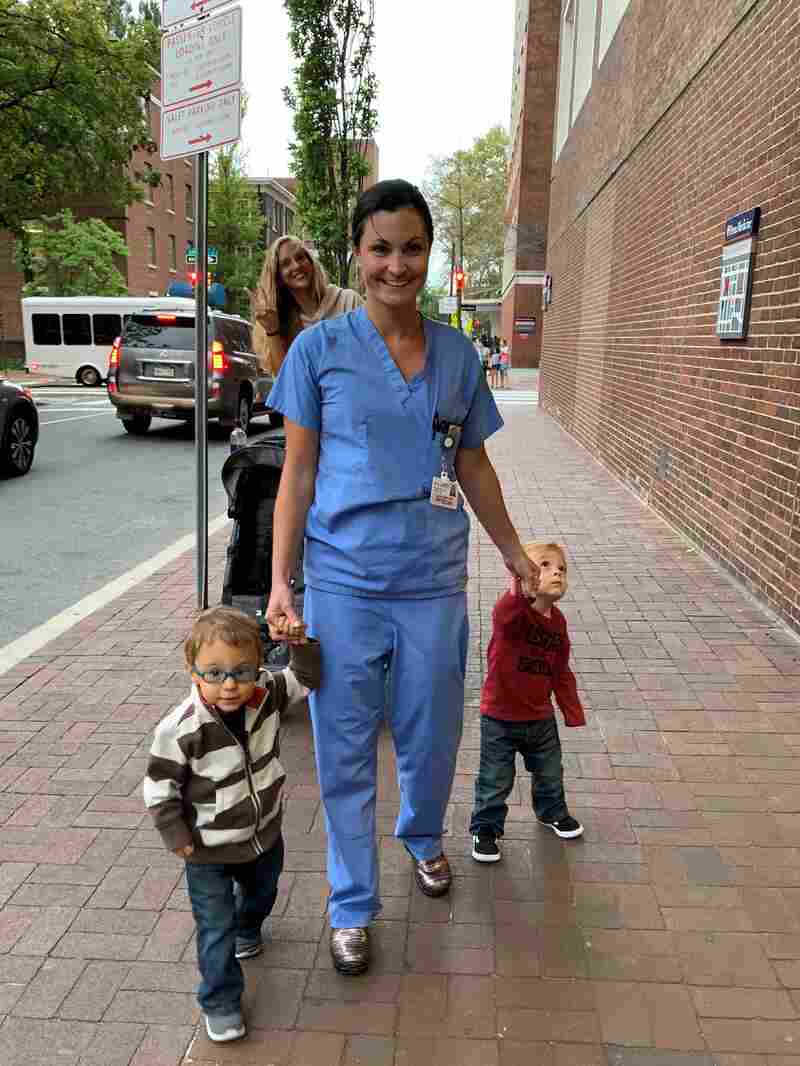 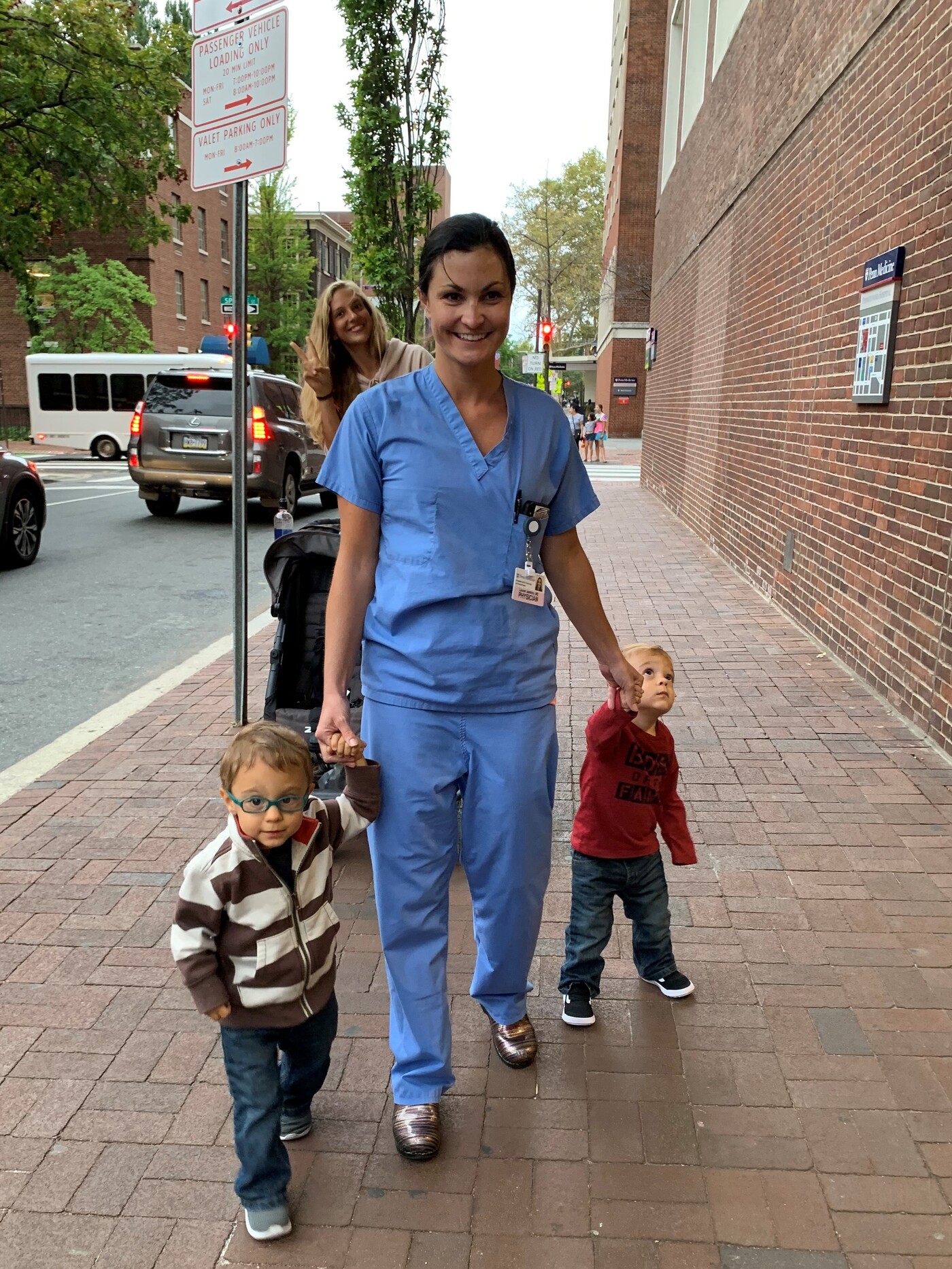 Dr. Lauren Jenkins walks with her two sons, Pierce and Ashton, in Philadelphia in the fall of 2019.

"It's a whole lot of questions with no answers, because nobody really knows," says Jenkins. "Nobody knows when it's going to end. We don't even know antibodies actually confer immunity or if it means you can get it the second time. What happens then?"

Roux, in particular, is worried that officials will end lockdown policies too quickly.

"I want to see the numbers come way down below before people start thinking that it's safe," he says. "Not just because of me, but there's the elderly and other people with immune deficiency."

Every day, he still comes by the house to work on the yard, even just to see his family from a safe distance.

"I get to see my kids through the window, but I can't touch them," he says. "It's awful, because I love my boys and they're fun and I'm dad. And, you know, if Lauren comes home and I'm still in the yard, I've got to stay like 10, 12 feet away from her.

"And I just kind of give her one of those air kisses, you know? I tell her I love her. And then we always say, 'this is weird.' You know, it's just so darn weird. But it won't last forever."