Accessibility links
Georgia Primary Comes As GOP Fears Losing Senate Seat "In general, Georgia Republicans have to just really reckon with the fact that it's not 2006 anymore," said one observer of the state's politics. 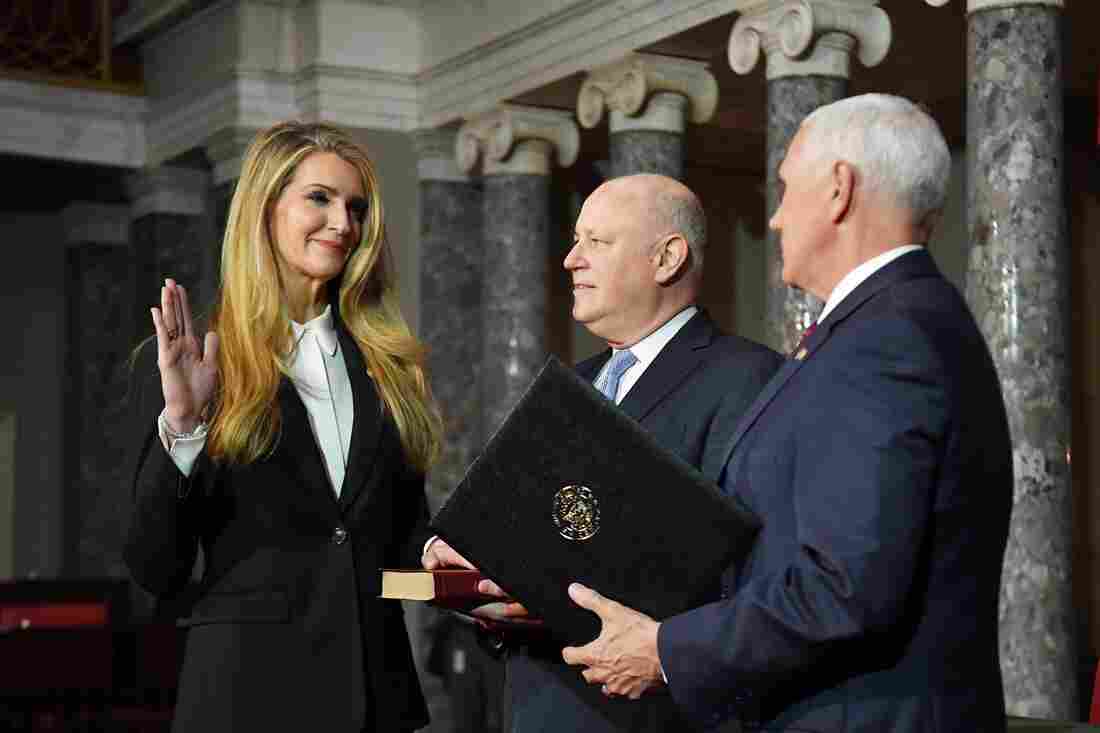 Sen. Kelly Loeffler, R-Ga., during her swearing-in by Vice President Pence (right) in January. Loeffler faces another Georgia Republican, Rep. Doug Collins, in a special election to complete her term, a divisive intraparty conflict that lays bare divisions within the Georgia GOP that could cost the party the Senate seat. Mandel Ngan/AFP via Getty Images hide caption 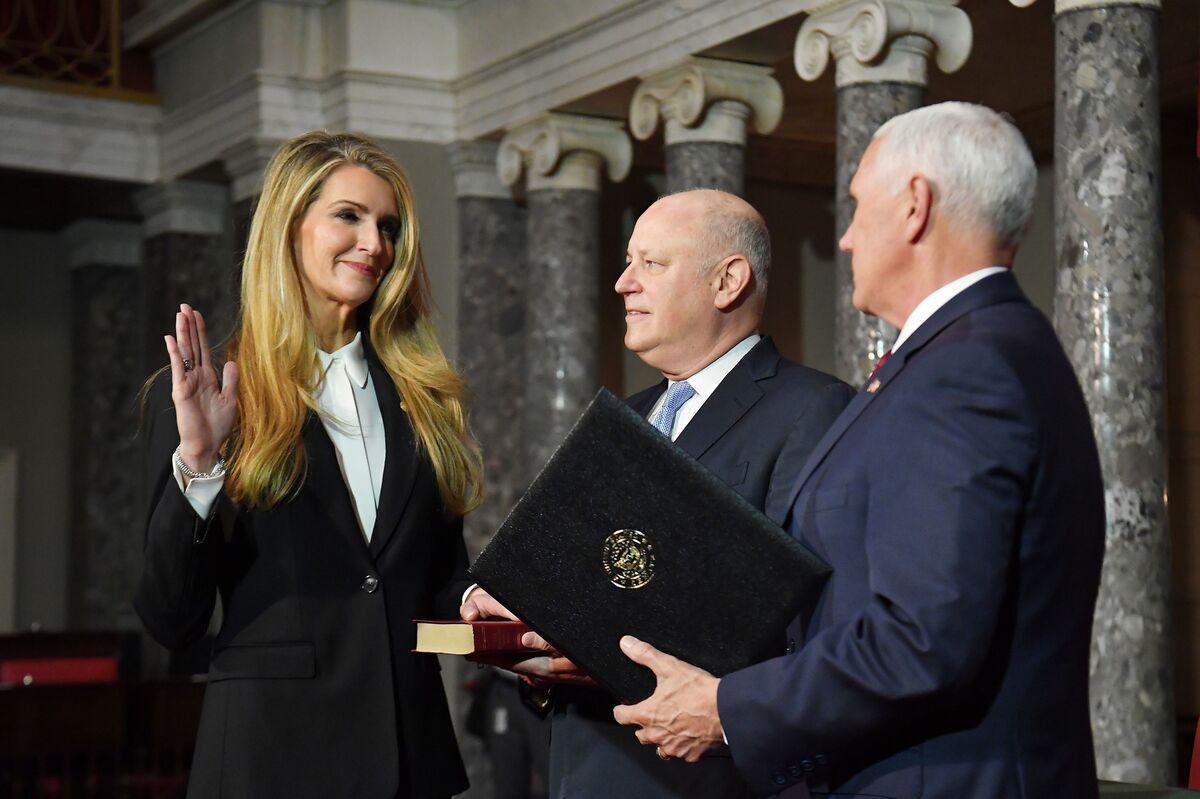 Sen. Kelly Loeffler, R-Ga., during her swearing-in by Vice President Pence (right) in January. Loeffler faces another Georgia Republican, Rep. Doug Collins, in a special election to complete her term, a divisive intraparty conflict that lays bare divisions within the Georgia GOP that could cost the party the Senate seat.

Georgia's primary elections on Tuesday are pulling attention back to what's expected to be a highly challenging set of races for Republicans there, who have dominated statewide politics for nearly two decades.

Buoyed by an electorate that is growing younger and more diverse, Democrats have been narrowing margins in Georgia in recent years. This fall, Democrats think they stand a chance of winning its 16 Electoral College votes, the two Senate seats on the ballot and an open U.S. House seat.

It would be a dramatic reversal of fortune for Georgia Republicans. Now-U.S. Agriculture Secretary Sonny Perdue's 2002 election as the state's first Republican governor in 130 years heralded a new era of Georgia politics. By 2015, the GOP controlled 10 of the state's 14 U.S. House districts, along with both U.S. Senate seats, not to mention control of the state government and legislature.

When asked whether the pendulum has started to swing back toward Democrats, he conceded there's truth to the idea. "That's the way politics works," he said.

While Perdue doesn't think Georgia is going to flip this year, he sees the parallels with the GOP's rise to power.

"I think when one political party in power has it for a long time, there's a complacency that comes in, and that's why people have choices. That's why we have two parties in this country — it holds us all accountable."

Another observer who draws comparisons to the early 2000s is Heath Garrett, a longtime Georgia Republican strategist.

Back then, "the Democratic Party had become complacent," he said.

"We also see a lot of very competitive intraparty Republican fighting trying to pull the Republican primaries farther to the right, just about the same time that the general election in Georgia is moving more to the center," Garrett said.

"Which creates the same conundrum for Republicans today that Democrats had 20 years ago."

Garrett is "cautiously optimistic" that his party can get organized in time for this year's election.

But the most high-profile intraparty fight that could challenge GOP unity is between Sen. Kelly Loeffler and U.S. Rep. Doug Collins. They're facing off in a special free-for-all election for Loeffler's Senate seat in November to fill out the remainder of the term left by Sen. Johnny Isakson's retirement. Loeffler was appointed in December to replace Isakson.

The contest has already gotten nasty, the last thing Georgia Republicans needed in a race that was already showing signs of being challenging.

"It troubles me we're going to have this fight among Republicans," said Martha Zoller, a conservative talk show host and Loeffler supporter. "And it's going to be a very weird fight because it's a special election ... so that's going to muddy the waters quite a bit."

Twenty-one candidates have qualified for the special election in November, when voters will also choose between incumbent Republican Sen. David Perdue (a cousin of Sonny Perdue) and the winner of this week's Democratic primary.

Democrats have been tightening Georgia's election results in recent years. In 2016, Donald Trump won by about 5 points. In 2018, Republican Gov. Brian Kemp defeated his Democratic opponent by about 1.5 points. In 2018, Democrats flipped one suburban Atlanta Republican U.S. House seat and came close to winning another.

"In general, Georgia Republicans have to just really reckon with the fact that it's not 2006 anymore," said Andra Gillespie, a political science professor at Emory University, citing demographic shifts and growing organization and voter registration by Democrats.

It's all compounded, Gillespie said, by this season's headlines, including the protests against racial injustice and the coronavirus pandemic.

2020 will be the most "difficult to anticipate" presidential outcome in Georgia since 1996, said Charles Bullock, a political scientist at the University of Georgia.

Bullock has seen two main responses from Republicans to the unfavorable demographic trends. Some Republicans have attempted to moderate their policies and rhetoric. But he calls others, "kamikazes," who have responded to the changes in the state by pushing through polarizing conservative legislation, such as Georgia's recent anti-abortion law.

"Now you see Republicans beginning to wake up and take note and wonder if the strategy they had in the can is going to pull them out this time," said Teresa Tomlinson, a longtime Democrat who is running in the Democratic Senate primary.

"With this kind of sustained power, this longevity of 18 to 20 years of one-party political dominance, with it comes a complicity," she argued. "A reservedness to do anything different."

One Republican who says he's awake to the change is the state's senior U.S. senator, David Perdue. In audio obtained by CNN, he told activists that Georgia "is in play" and that "Democrats have made it that way."

Casey Black, Perdue's spokeswoman, said the campaign has known that his race would be competitive "from day one" and remains "confident voters will reelect him to the U.S. Senate."