Accessibility links
Millennials Are Staring At Yet Another Recession The coronavirus recession is the second — or even third — economic downturn of millennials' adult lives. That could mean reduced wages for life. 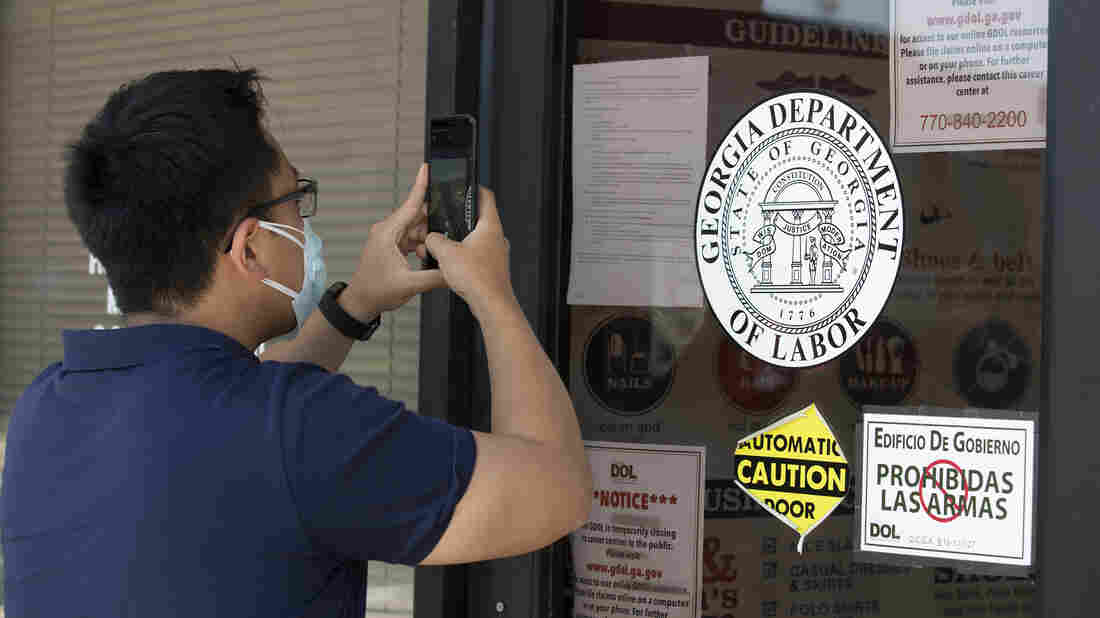 A man copies phone numbers posted on the locked doors of a Georgia Department of Labor office in in Norcross, Ga. Millennials are facing the second — or even third — economic downturn of their adult lives. John Bazemore/AP hide caption 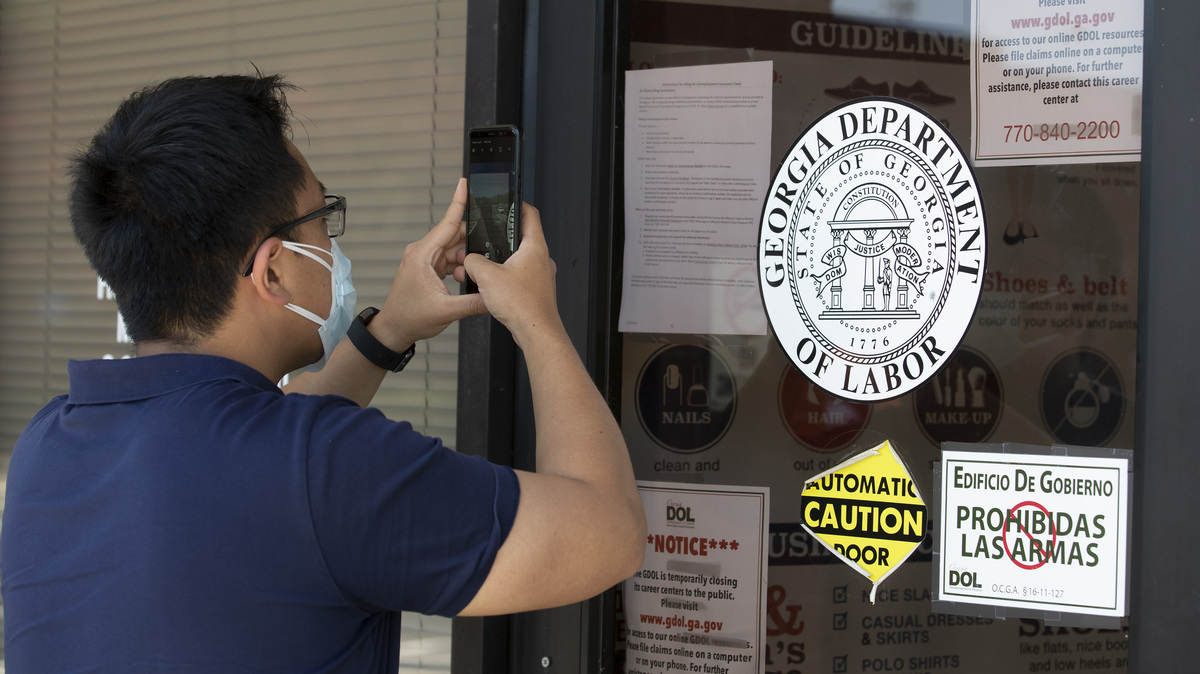 A man copies phone numbers posted on the locked doors of a Georgia Department of Labor office in in Norcross, Ga. Millennials are facing the second — or even third — economic downturn of their adult lives.

Millennials might be getting a queasy sense of déjà vu right now. Another economic crisis — like a punch in the gut.

It's the second time for Alannah Silvernail.

In 2010, she was attending community college in western New York when she hit a rough patch.

"​My grandmother had passed away, and it ended up being a really tough semester for me," she said.

It's Official: U.S. Economy Is In A Recession

So she dropped out — one class shy of her associate's degree. With unemployment near 10% after the Great Recession, she decided that being an art major wasn't a viable career path. So, after working minimum wage jobs, she decided to drive trucks, which didn't pay that well either.

Eventually, she started driving school buses and motor coaches. That paid better, and she enjoyed it. But now, she has a new problem: Schools are closed, and tourism has dried up, so the 29-year-old Silvernail is on unemployment.

"I've always been really driven to work," she said. "But it's really weird to me to just sit around for months on end and not do anything."

The pandemic has already sent unemployment into double-digit territory, and the coronavirus recession — officially declared on Monday — is the second one in many millennials' adult lives, after the Great Recession. For the very oldest millennials, it's the third, counting the post-Sept. 11 recession.

Millennials are between 24 and 39 years old, meaning they include people with a wide range of experiences. The youngest have barely started their careers, while the oldest include people who are well-established in their jobs.

A 'scarring effect' for millennials

The effects of yet another deep recession would be lasting and painful for millennials like Silvernail, says William Gale, a senior fellow in economic studies at the Brookings Institution.

"These type of things have what are called 'scarring effects.' They have long-term effects on wages," he said. "They tend to move people down to a different wage path."

For her part, Silvernail had been working up to 70 hours a week before the pandemic. Things had been looking up for her.

"This past year was the first time I've ever been able to buy a new used car," she said. "And then the next three to five years, I was planning on getting a house, but I'm not really sure that that's possible now."

According to a recent working paper that Gale co-authored, millennials had less wealth in 2016 than previous generations did at that age.

The authors list multiple trends that work in millennials' favor — for example, they are more educated than previous generations.

But there are other factors that work against millennials: Many are contractors or "gig economy" workers, meaning less-steady work and often with fewer benefits. Many began their careers during the Great Recession, meaning they were in danger of those reduced wages that Gale talked about.

Millennials also have lower homeownership rates than older generations did at their age, a 2018 study found. That can be because of the lower wages that they start with, resulting in lower net worth in the future.

Another thing that makes millennials unique: They are more diverse than prior generations — and in America, a host of factors have prevented many people of color from amassing wealth, as Gale and his coauthors note. The coronavirus crisis could easily exacerbate that.

Michael Arceneaux — himself a millennial — is the author of the essay collection I Don't Want To Die Poor, in which he talks about his own financial struggles.

Arceneaux took out more than $100,000 in student loans to graduate from Howard University in 2007.

In a generation already bearing heavy student debt, college can be a shaky step to the middle class. And black Americans, like Arceneaux, tend to borrow more altogether for college than white people do, and have a harder time paying it back. To Arceneaux, if you want to talk about the struggles of millennials, you have to talk about racial gaps like student debt or the lasting effects of housing segregation.

"I think millennials as a collective generation have been screwed over, and it's even worse for some of us than others, which is why it's important for all of us, but particularly those who are suffering the most, to speak out more openly," he said.

His large student loan debt has weighed not only on his finances, but also in the past affected how he saw relationships.

"​I've maybe sometimes overthought it. But I've also been like, 'How serious do I want to be in a relationship because I don't want to pull in somebody who would then be legally attached to that debt?' " he said.

A new challenge, decades down the road

The financial challenges millennials face today could add up to yet another difficulty down the road: saving for retirement. Already this generation is expected to retire later, so today's economic problems could make it worse and could be playing out for them decades from now.

Silvernail knows that firsthand — she had thought about starting a retirement account just before this crisis but wasn't quite sure how.

While the coronavirus downturn presents challenges for every age group, millennials have had to face a unique set of tough circumstances.

"I think that it's bad for everybody, but I think that if millennials wanted to make a case that's particularly bad for them, I would not object to that," Gale said.