Accessibility links
5 Things To Watch This Week In Politics And Coronavirus The president is trailing former Vice President Joe Biden in polls. Biden is heading to Houston to meet with George Floyd's family Monday, while Trump will hold a law enforcement roundtable.

Trump's Response To Coronavirus, Race Has Put Him In A Hole For Reelection

Trump's Response To Coronavirus, Race Has Put Him In A Hole For Reelection 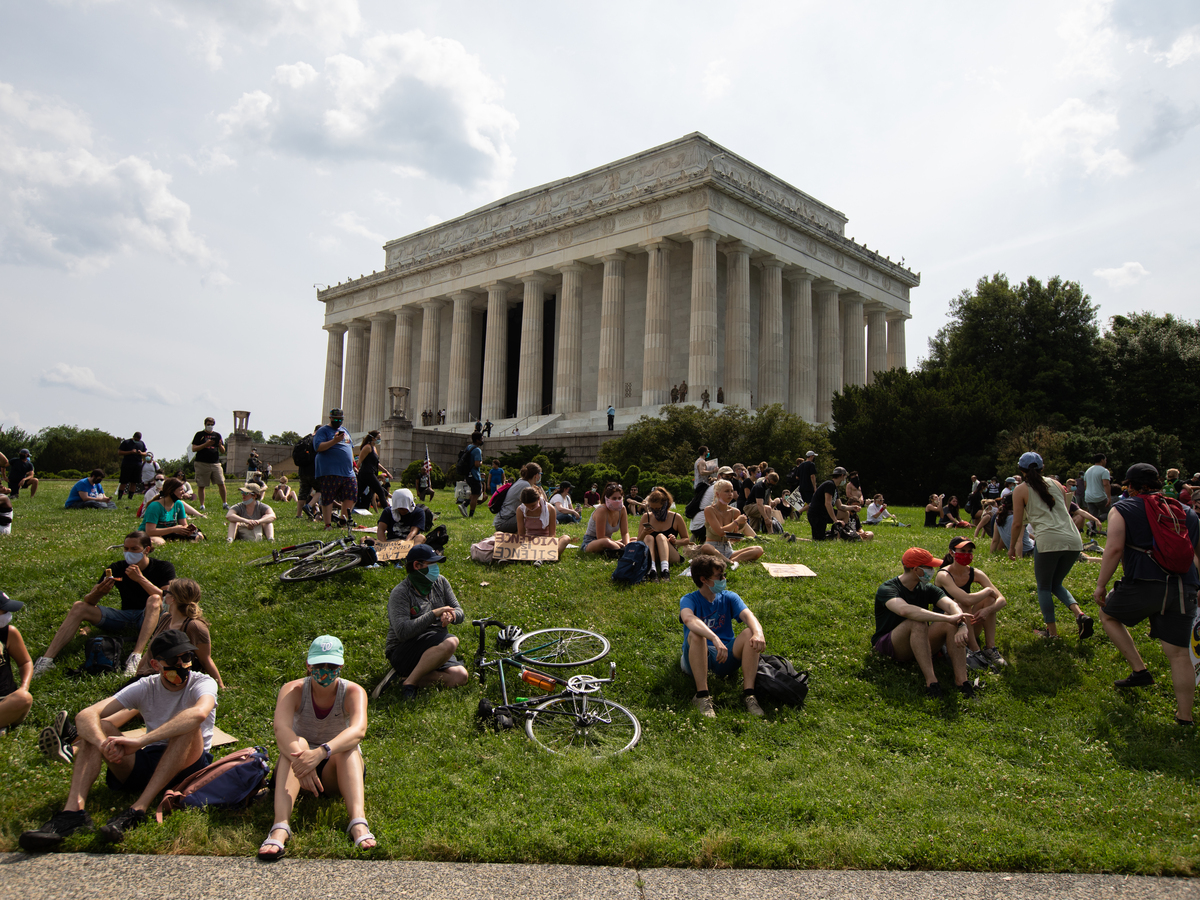 Thousands of people gather Saturday near the Lincoln Memorial in Washington, D.C., following a demonstration at the Dirksen Senate Office Building to protest police brutality.

Hundreds of thousands of people descended on the nation's capital and cities across the country over the weekend in continued demonstrations sparked by George Floyd's death at the hands of Minneapolis police.

The protests were largely peaceful, and their meaning has extended beyond Floyd's fate to the larger issue of policing in America and police treatment of black Americans.

"Don't let the life of George Floyd be in vain," a county sheriff said at a memorial service for Floyd on Saturday in North Carolina.

Floyd will be remembered Monday in Houston at a public memorial service followed by an invitation-only funeral service Tuesday. Former Vice President Joe Biden will fly to Houston and meet with Floyd's family Monday and deliver a videotaped message at the funeral service, though he won't attend it because of complications his Secret Service detail would create.

President Trump won't be attending. He will be in Washington and on Monday will host a roundtable with law enforcement at the White House.

The two actions couldn't better sum up where the two men on the ballot this November to lead the country are coming from — and the bets they're making to win.

Trump has taken a hard "law and order" line, thinking that will appeal to suburban whites. CBS reported over the weekend that after demonstrations turned violent last weekend, the president wanted 10,000 active-duty military personnel on the streets.

And while he has praised Floyd and been critical of police action in Minneapolis that killed the 46-year-old black man, Trump has also sounded off key. 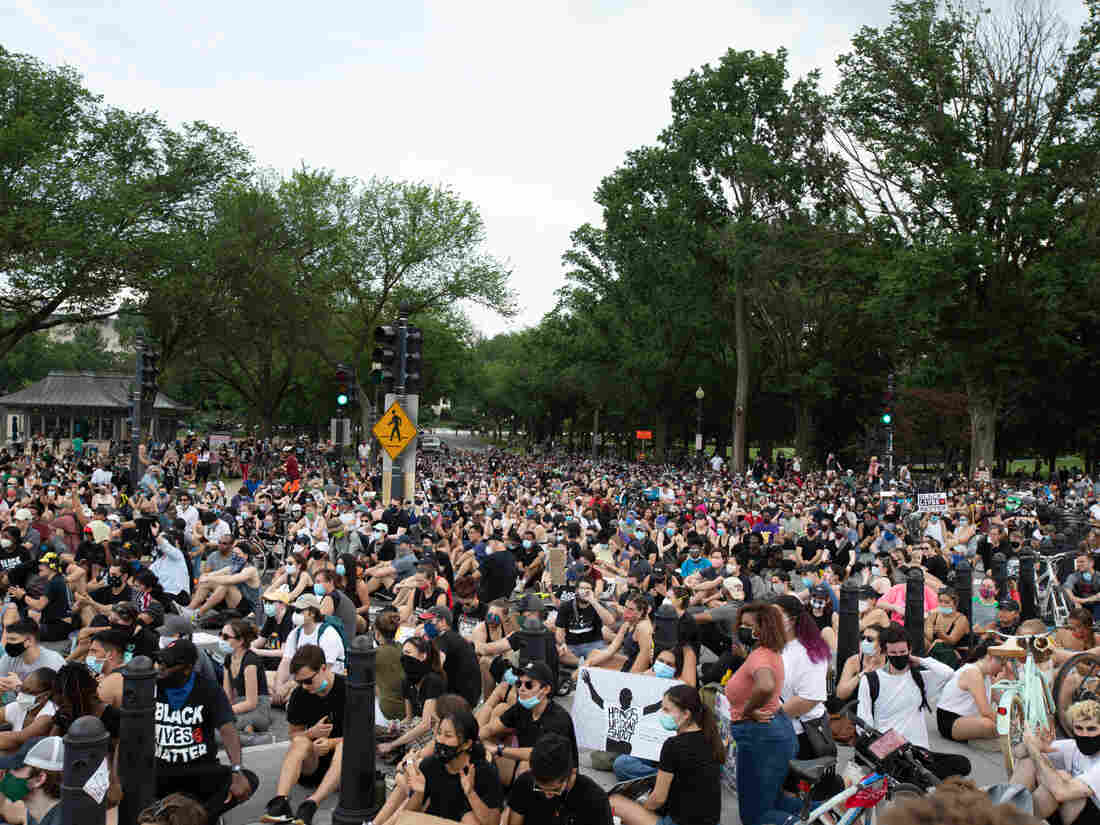 Thousands of protesters gather in front of the Lincoln Memorial in Washington, D.C., on Saturday. Eman Mohammed for NPR hide caption Thousands of protesters gather in front of the Lincoln Memorial in Washington, D.C., on Saturday.

Two other actions prompted pushback. Trump's walk last Monday to a church, part of which was burned, across from the White House came after law enforcement forcibly removed peaceful protesters, and the president threatened to invoke the Insurrection Act and use the military if governors didn't deploy National Guard troops to quell the protests. Both moves caused controversy — and breaks with multiple, high-profile current and former military officials.

What's more, survey data show his view of the country may be outdated. A new NPR/PBS NewsHour/Marist poll found two-thirds of Americans feel Trump has increased racial tensions since Floyd's death, and they largely disagree with his view of the demonstrators. More than 6 in 10 see the demonstrations as mostly legitimate protests rather than unlawful acts. Those are big shifts from the 1960s, when majorities sided with police and had an unfavorable view of civil rights protests.

Polls have also shown more people disapproving of the president's handling of the coronavirus, and an NBC/WSJ poll out Sunday showed people say they think Biden would be better to handle the pandemic by an 11-point margin.

There are still five months to go until the presidential election. This could be the nadir for Trump politically, and most political strategists are girding for and expect a close election, but the president has a hole to climb out of right now if he hopes to be reelected. 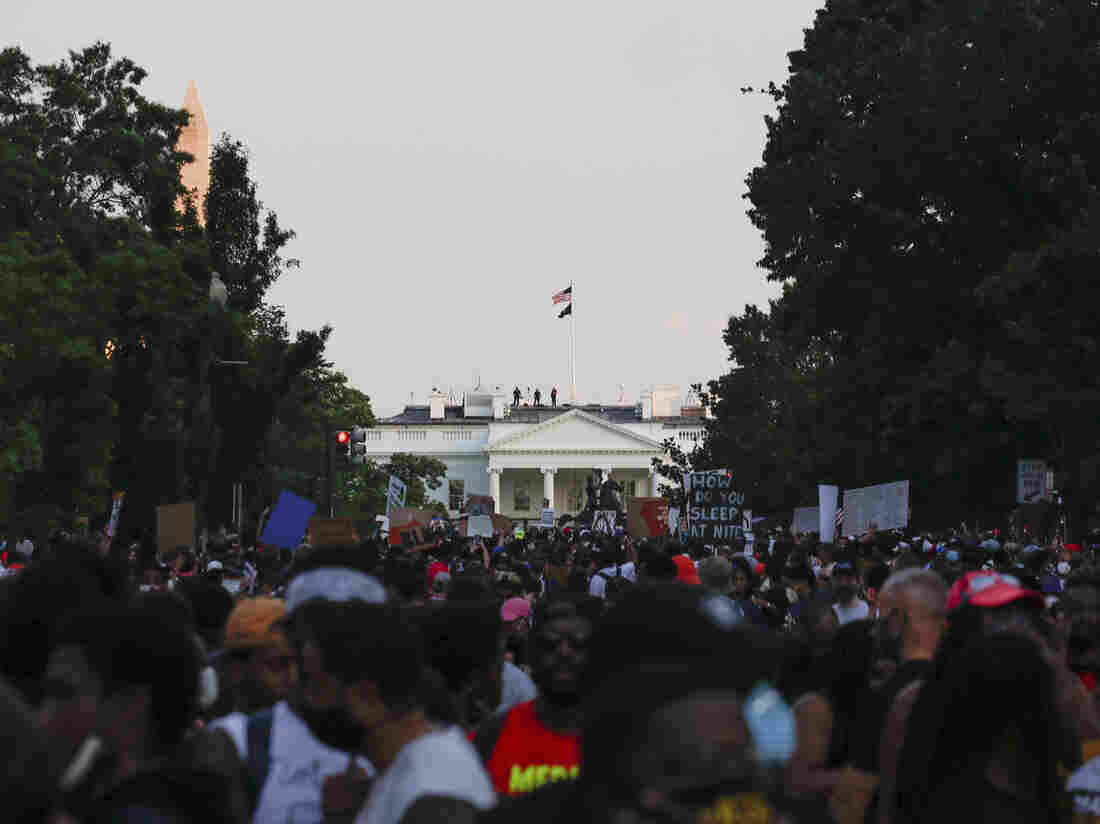 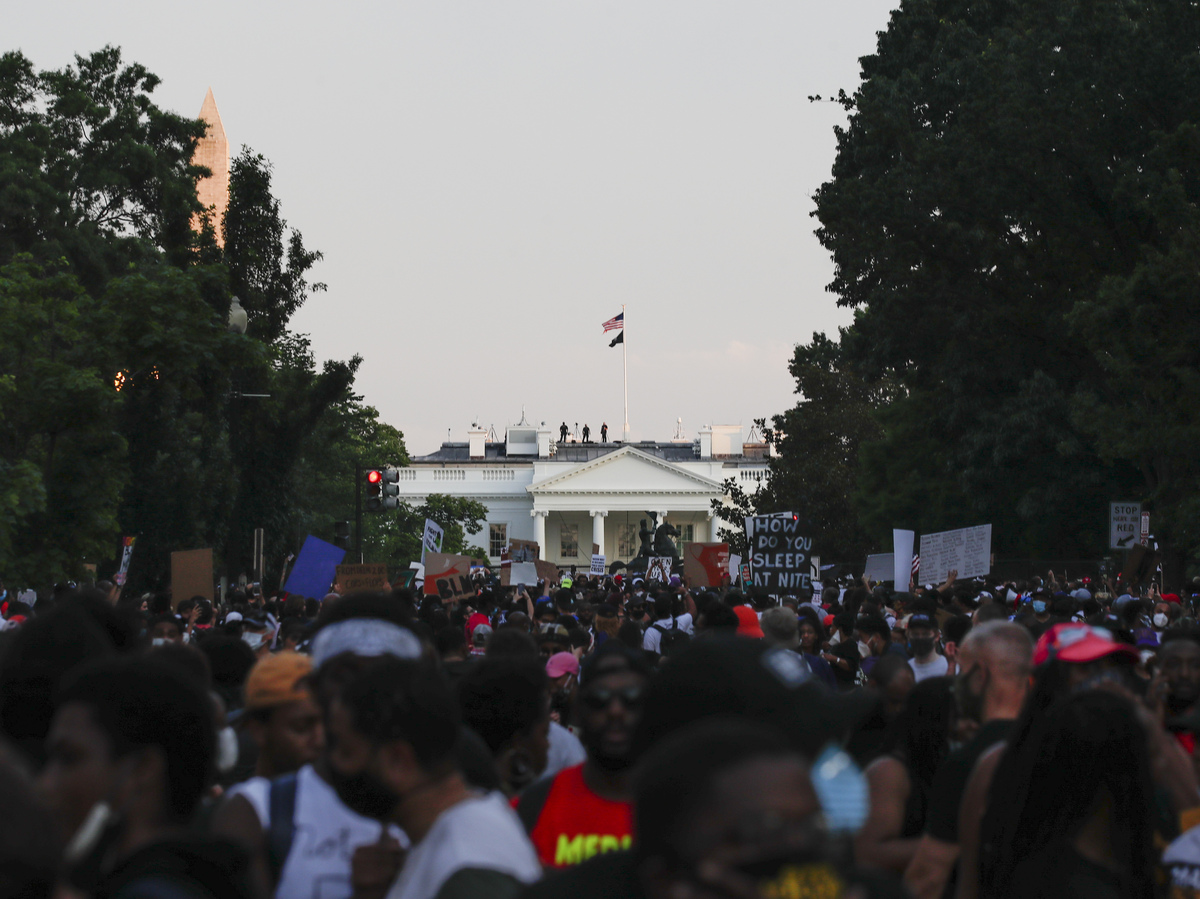 1. Protests and the president: The weekend largely saw peaceful, multiethnic protests around the country. Do people continue to go out to the streets in the same numbers? Do the protests die down? On Monday, Trump will hold a roundtable with law enforcement at the White House. Will he continue to take a hard line, given most people said they don't agree with him on his view of the demonstrators?

2. Race and justice take spotlight on Capitol Hill: On Monday, House Democrats will unveil police reform legislation led by the Congressional Black Caucus, and on Wednesday, a House committee holds a hearing on racial profiling and policing. Notably, these are Democratic-led initiatives. Will there be Republicans who join in to press for changes in policing? After all, bipartisan efforts are what led to criminal justice reform legislation in 2018.

3. What about the coronavirus? With masses of people in the streets, it's easy to forget that much of the country was locked down because of an airborne, viral respiratory pandemic. The U.S. has now crossed 110,000 deaths from the coronavirus. Many front-line workers, doctors, nurses and other health care workers are torn regarding the protests and what they could mean for a resurgence of the coronavirus. The New York Times: "Many say they view the deaths of black people at the hands of police as a public health issue. But they also express worries that large gatherings will cause a second wave of Covid-19 cases, and they are balancing their involvement with calls for protesters and police officers to adhere to public health guidelines." There's no way to know what the effect will be yet, but it's something to watch.

4. Watching the U.S. Supreme Court: The high court is set to release orders and opinions on Monday. The big topics to watch for are on LGBTQ rights and DACA, the Deferred Action for Childhood Arrivals program started during the Obama administration. The LGBTQ case is an employment discrimination one. On the DACA case, when the case was argued in the fall, the court's conservative majority appeared ready to go along with the Trump administration's argument that it acted lawfully in shutting down the program. The program was enacted by President Barack Obama by executive order. The court may also take up cases involving the Second Amendment and qualified immunity.

5. Trump heads to West Point; coronavirus evident there: Trump is slated to give the commencement address at the U.S. Military Academy at West Point on Saturday. But 16 cadets and 71 faculty, staff or civilians at the campus have reported positive for COVID-19. USA Today: "Sources on Capitol Hill, with access to information but not authorized to speak publicly, said that of the 16 affected cadets, 14 had tested positive for the antibody that indicates they had contracted the virus, recovered and had developed antibodies. In addition, 71 of the more than 5,000 faculty, staff and civilians at West Point have tested positive for COVID-19 since March. All but four civilians have recovered, and they are living off the post."

— Attorney General William Barr, on CBS Face the Nation, on what was used against peaceful protesters outside the White House on Monday before they were forcibly cleared to allow the president to take a walk to St. John's Church across from the White House.

While Park Police say they didn't use "tear gas," a local reporter collected spent cans of tear gas on scene. What's more, Dr. Ranit Mishori, senior medical adviser for Physicians for Human Rights and a Georgetown University professor of family medicine, told FactCheck.org in an email: "Tear gas and pepper spray both belong to a class of crowd-control weapons known as chemical irritants."