Accessibility links
Pittsburgh Newspaper Bars Black Reporter From Covering Protests The Pittsburgh Post-Gazette barred a black reporter from covering unrest over a flippant tweet. The same day, editors gave a white reporter only a warning for a vulgar tweet about a looting suspect.

Listen · 4:11 4:11
Editors Barred A Black Reporter From Covering Protests. Then Her Newsroom Rebelled 4:11 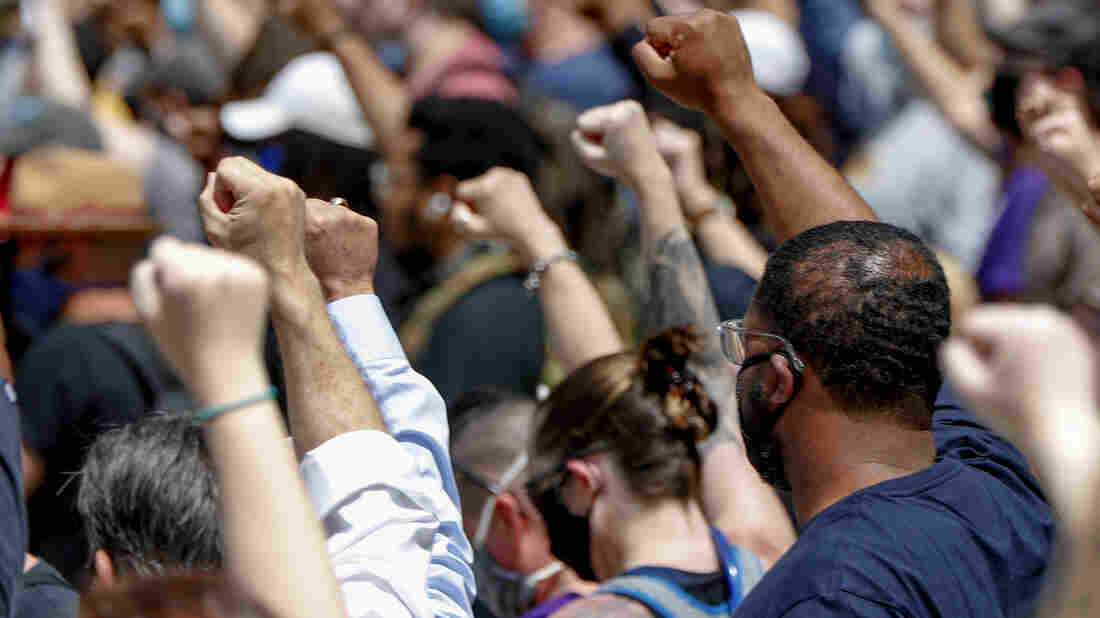 Demonstrators raise their fists during a May 30 march in Pittsburgh to protest the death of George Floyd. Keith Srakocic/AP hide caption 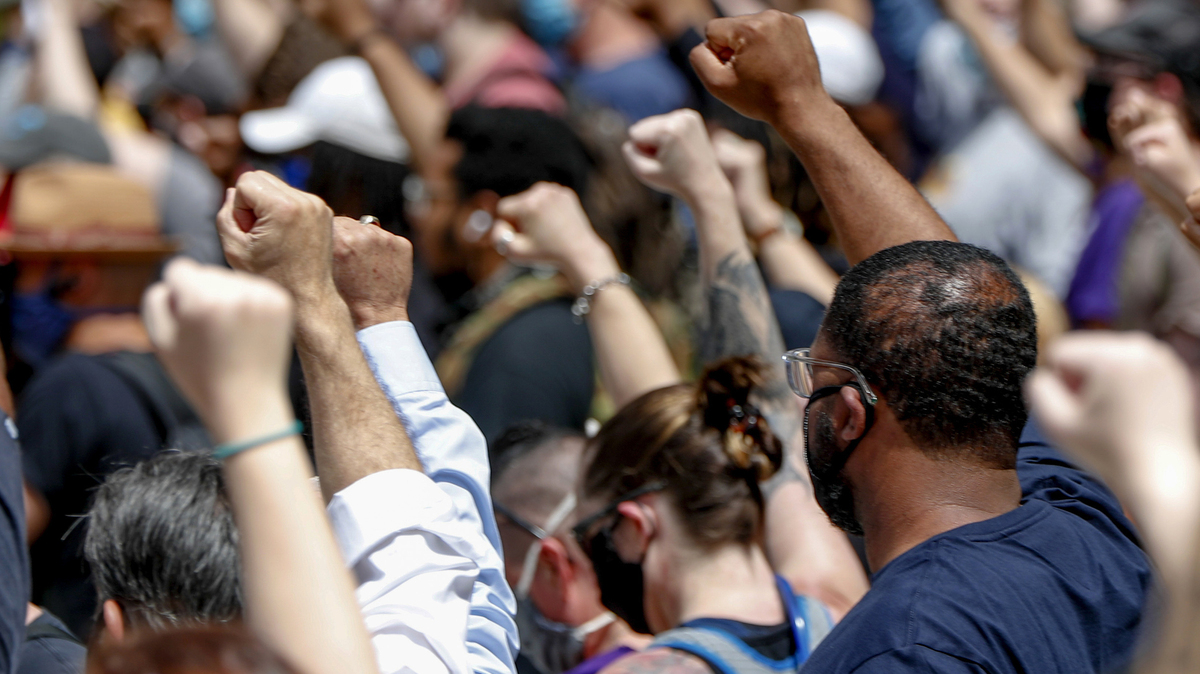 Demonstrators raise their fists during a May 30 march in Pittsburgh to protest the death of George Floyd.

The fight over racial justice that has sparked protests across the country is also upending some of the country's leading newsrooms.

At The New York Times, James Bennet stepped down Sunday as editorial page editor, yielding to colleagues who had protested the posting of a column by Sen. Tom Cotton, R-Ark., in which he advocated that the military help quell civil unrest.

The day before, The Philadelphia Inquirer Executive Editor Stan Wischnowski resigned. Controversy had erupted both in and outside his newsroom when the paper published the headline "Buildings Matter, Too" atop a column on rioting. Reporters there argued it equated property damage to human life.

And at the Pittsburgh Post-Gazette, rank-and-file journalists are fighting back after editors banned a black reporter from covering local protests. It was retribution for writing a flippant tweet comparing looters to country music fans after a concert.

NPR has learned that a white reporter at the paper who had tweeted a vulgar disparagement of a man accused of looting also received a warning on the same day as his black colleague. But the white reporter kept covering issues related to the protest. He was banned from covering protests two days later, only after the newspaper's union raised the issue of disparate treatment.

The Post-Gazette newsroom has a tense relationship with its owners. Staffers have worked without a union contract for more than three years. Post-Gazette journalists have previously objected to the firing of liberal editorial cartoonist Rob Rogers over several cartoons, including ones satirizing President Trump. Co-owner John Block, who is the paper's publisher and is also listed as editor-in-chief, had his photo taken in 2016 with Trump aboard the candidate's private jet during the height of the campaign season. Burris was also on the plane, according to contemporaneous accounts.

In this case, Alexis Johnson remembers coming into the newsroom one week ago full of story ideas about the protests. She is 27, African American and a Pittsburgh native.

"These are very much my friends and family and community members that were out there in the streets, protesting against police brutality in the black community," she told NPR.

Editors did not respond to her pitches. Instead, she says, she was called by the paper's managing editor and two other top editors. They pointed to a tweet she had sent out the previous night.

"Horrifying scenes and aftermath from selfish LOOTERS who don't care about this city!!!!!" she wrote. ".... oh wait sorry. No, these are pictures from a Kenny Chesney concert tailgate. Whoops."

The pictures showed the debris-strewn aftermath of Chesney's concert at Pittsburgh's Heinz Field.

"It's almost a running joke in Pittsburgh," Johnson said. "It's infamous — what happens after these Kenny Chesney concerts when he comes into town."

Johnson said she asked the editors to describe the bias they said she had shown.

"They kept doubling down, saying I gave my opinion through the tweet and that my opinion came through in the tweet," Johnson said. "And I don't think that's the case at all. I think people made their own opinions of what I was trying to say. I thought it was kind of clever."

Horrifying scenes and aftermath from selfish LOOTERS who don’t care about this city!!!!!

.... oh wait sorry. No, these are pictures from a Kenny Chesney concert tailgate. Whoops. pic.twitter.com/lKRNrBsltU

The paper barred Johnson — the daughter of a state trooper and a probation officer — from covering a story in her hometown about police and racial justice. Editors subsequently sidelined a black photographer, Michael Santiago, as well. The two are among a small number of black journalists at the paper. Of the 140 members of the Newspaper Guild of Pittsburgh, 13 are African American.

Colleagues took to social media to denounce the newspaper's moves and to rally support for Johnson and Santiago. Scores retweeted Johnson's original remarks. Since then, the paper has removed links to stories about racial justice written by several reporters who have voiced support for the two, according to the union.

The controversy lays bare the tension between a pursuit of impartiality that has been a journalistic tenet for three quarters of a century and a new urgency, felt keenly among younger journalists and journalists of color, to bear witness to what they're seeing.

Two years ago, as editorial page editor, Burris wrote an editorial arguing that Trump's remarks should never be characterized as racist, even, he wrote, after describing African nations as "shithole countries." It sparked an outcry, including from some of Block's relatives and shareholders in the paper's parent company.

Now one of Burris' reporters, Johnson, says she believes her editors discriminated against her because of her race. And the gentler rebuke meted out to a white colleague for a related transgression appears to buttress her case.

Like Johnson, digital sports reporter Joshua Axelrod is in his late 20s — 28 to be exact — and less than a year into his job.

A week ago, Axelrod reported on a man accused of vandalizing and looting stores in downtown Pittsburgh. He tweeted about it, calling the suspect a vulgar slang word.

"Not a very sound journalistic decision, admittedly," he told NPR in his first public comments on his actions and how the paper handled it.

"It felt like the nation and my city were undergoing a very tough time, and it was tough to separate myself as a journalist and just a person in the world," he said. "And I recognize the mistake I made. But it came from a place of emotions running high."

His editors reprimanded him — on the same day that Johnson received her editors' calls. Axelrod subsequently deleted the tweet.

Unlike Johnson, however, Axelrod says he did not receive a directive preventing him from covering stories involving the protests. Indeed, he says he asked whether he was being punished and was told he was not. Axelrod posted an article related to the protests the next day.

The Newspaper Guild soon weighed in, noting that Johnson had been treated more severely than Axelrod. Faced with the seeming contradiction, the paper didn't relent against Johnson. Instead, the Post-Gazette banned Axelrod from protest coverage, too.

"I made a legitimate journalistic mistake," Axelrod says. "I do not think either of them did."

In a press conference Monday, the union denounced the newspaper for what it contended was racial bias and called for advertisers to pressure the Post-Gazette to reverse its decisions.

In a series of tweets, Post-Gazette reporter Andrew Goldstein noted he had been encouraged to cover the mass killings at the Tree of Life synagogue in 2018 despite his own ties to the event: He is Jewish and lives near the synagogue. Further, he argued that the paper's black journalists propel its knowledge of its communities.

Goldstein, like Santiago, was part of the paper's large team honored with a Pulitzer Prize for the coverage of that massacre.