Accessibility links
What Is A Microaggression? And What To Do If You Experience One. : Life Kit Microaggressions are the everyday, thinly veiled instances of racism, homophobia, sexism and other biases that come across in gestures, comments or insults. But the "micro" doesn't mean that the acts don't have a big impact. While there's no one right way to address a microaggression, we have some pointers for ways you can begin to respond. 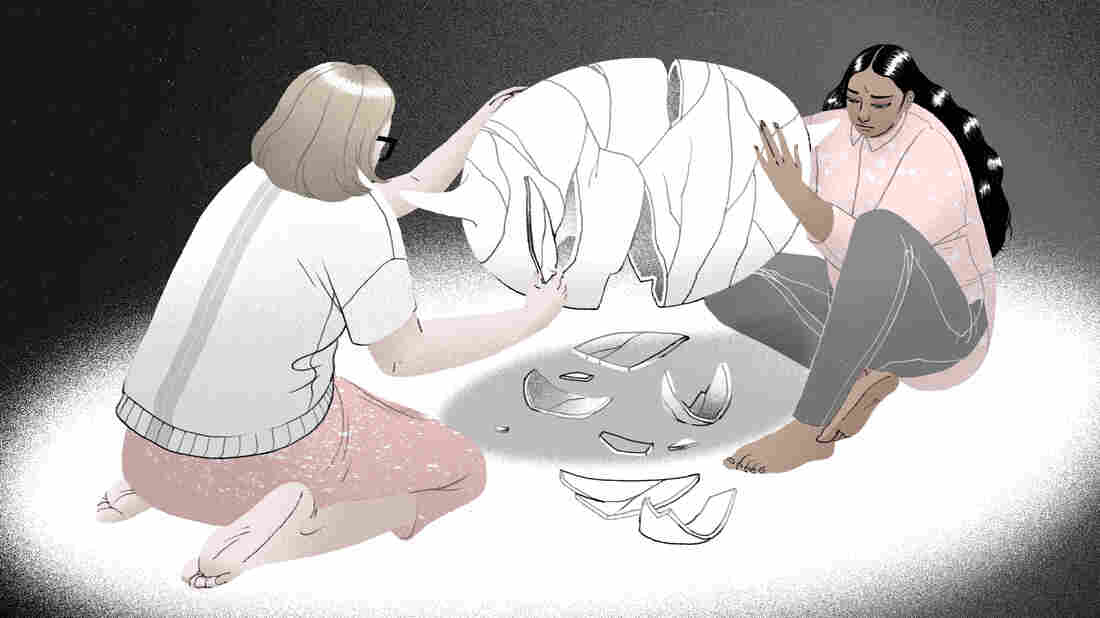 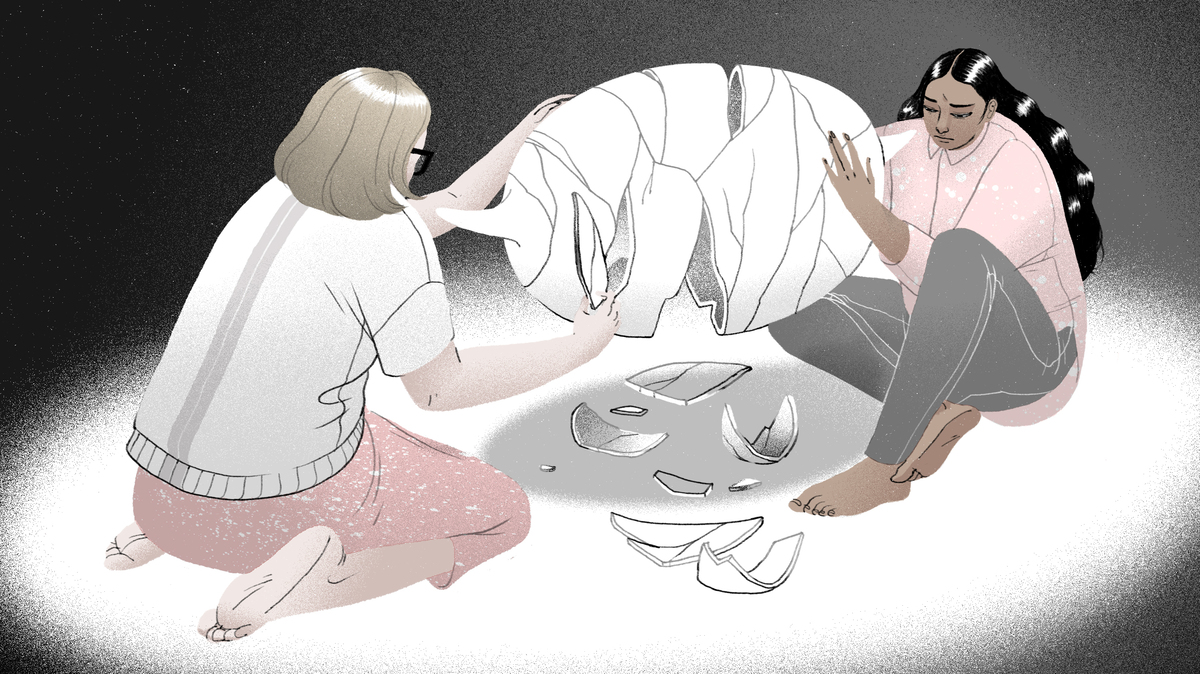 The police killing of George Floyd and the protests that followed have the nation discussing big issues of structural racism, policing and power. And maybe you're thinking about your part in all of this, too. Maybe at your workplace or in your friend group or among family, you're having difficult discussions about the instances of racism that you've seen or felt or even may have even been complicit in.

These conversations are essential to affect change, but they're hard and uncomfortable, and you're bound to run into what's known as "microaggressions." These are the thinly veiled, everyday instances of racism, homophobia, sexism (and more) that you see in the world. Sometimes it's an insult, other times it's an errant comment or gesture.

Kevin Nadal, a professor of psychology at John Jay College of Criminal Justice, has spent years researching and writing books on the effects of microaggressions. As these big structural issues play out, he says it's important to confront the small stuff.

"We navigate all of these things in our lives," Nadal says. "For many of us on a daily, hourly basis. And for some of us where we might not even recognize that we are navigating them or even perpetrating them."

To be clear, the "micro" in microaggression doesn't mean that these acts can't have big, life-changing impacts. They can, which is all the more reason to address them when you see them. If you can, that is. I spoke to Nadal about how.

Andrew Limbong: What exactly is a microaggression?

Kevin Nadal: Microaggressions are defined as the everyday, subtle, intentional — and oftentimes unintentional — interactions or behaviors that communicate some sort of bias toward historically marginalized groups.

The difference between microaggressions and overt discrimination or macroaggressions, is that people who commit microagressions might not even be aware of them.

Someone commenting on how well an Asian American speaks English, which presumes the Asian American was not born here, is one example of a microaggression. Presuming that a black person is dangerous or violent is another example. A common experience that black men talk about is being followed around in stores or getting on an elevator and having people move away and grab their purses or their wallets.

Oftentimes, people don't even realize that they're doing those sorts of things. And in fact, if you were to stop them and say, 'Why did you just move?' They would deny it because they don't recognize that their behaviors communicate their racial biases.

If someone says something racist to me, what does their intent matter?

So let's say you get into a conversation about current events. And the conversation turns toward police and racism and police brutality. Maybe the conversation gets a little tense and you can sense that a microaggression might be coming. What are your options then?

I think there are a lot of things that people need to consider when having what we would call difficult dialogues. First, think about whether or not the person is worth talking to. Is this somebody that you care about? Is this somebody who you think would actually have the capacity to hear what you have to say? A lot of times people get into arguments with people they don't need to necessarily be emotionally invested in because they don't have that sort of relationship.

If you are close and if you do have a relationship it might be important just to say, 'Look, I feel like we're both getting really emotionally charged right now. I don't feel like I'm able to hear what you're saying. I don't feel that you're able to hear what I'm saying. So maybe we need to table this and talk another time.' Or maybe offer to give them something they could read — that could be more helpful or effective than a conversation that might just turn into yelling and hostility.

Is there a risk of this feeling like homework?

Yes. Oftentimes people of color are asked to educate white people on issues that the person of color has lived with and thought about for their entire lives. That can be very psychologically and emotionally exhausting for a person to then have to care about the white person's feelings and to take those extra efforts so that they can learn something that they should have — and could have — learned throughout the duration of their life.

You don't have to do that if you don't want to. Or you could provide them with resources or a book to read before they even come to the conversation.

At the same time, if you're a person with privileged identities and you want to be a true ally, maybe you do have to do that homework. Maybe you do have to engage in those uncomfortable emotions because you know that it's your job and responsibility to have those conversations so that other people of color or women or LGBTQ folks won't have to have those conversations for you.

There can also be a certain amount of discomfort if you're talking about a group that isn't involved in the conversation, right? Here we are talking about police brutality against black people and neither of us is black.

You don't have to be of a certain group to understand that something is unjust. It's really about learning how to be empathetic to people. And also just to be really aware and knowledgeable of history. This country is founded on racism toward indigenous people and racism toward black people, and that's not new.

Even if we might not necessarily understand exactly what it means to be a member of the targeted group at that moment, we certainly rely on our knowledge and our awareness of history and of the lived experiences of people of those groups.

Let's assume that we're close friends and talking about being brown in New York. And then I say something homophobic, but we're friends and you know that I could be better. Where do you go from there?

And if we're friends, that means that I trust that you do care about social justice issues — that maybe this is just a slip in that moment that that person will say, 'Oh, I'm sorry.' I didn't mean that. Because asking someone what they mean by that is giving them that opportunity to explain themselves.

And for some people, they say things just because they've been so socialized to say certain things. But when they're really asked to explain what they're trying to say, that's where, you know, they have to think about it and sometimes even retract what they originally say because they don't want to perpetuate something that isn't actually who they are.

So what would you say are three quick bits of advice on having these difficult dialogues?

Do your own work before you even get there. Read blogs and personal essays, understand the lived experiences of historically marginalized groups, watch documentaries and try to think outside of your own perspective.

Set realistic expectations of what you want from these conversations. Also think about, is this actually helping? Is this a conversation that I view as being helpful in any way, shape or form? It's important to acknowledge that no one is going to learn everything in one conversation overnight.

Always be aware of yourself and your mental health when having these conversations. In a world where we all fought for social justice all the time, we would be getting into productive arguments and fights and having protests every day and changing laws, but we don't and we can't because we're also human and we need to rest.

The audio portion of this story was produced by Andee Tagle.

For more Life Kit, sign up for our weekly newsletter.