Accessibility links
Louisville Youth Question Mayor Over Response To Breonna Taylor's Killing On Sunday, a group of young people pressed Mayor Greg Fischer about the recent curfew, called him to task over using them for photo ops and presented him with a list of demands. 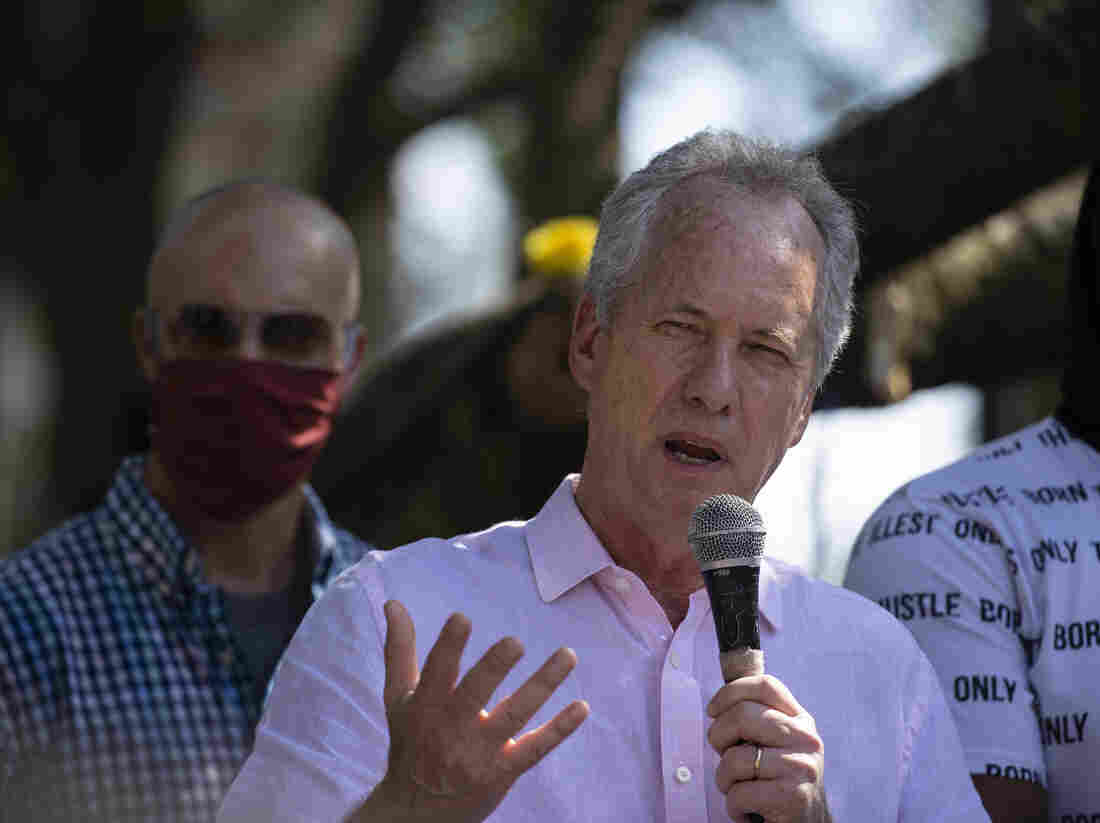 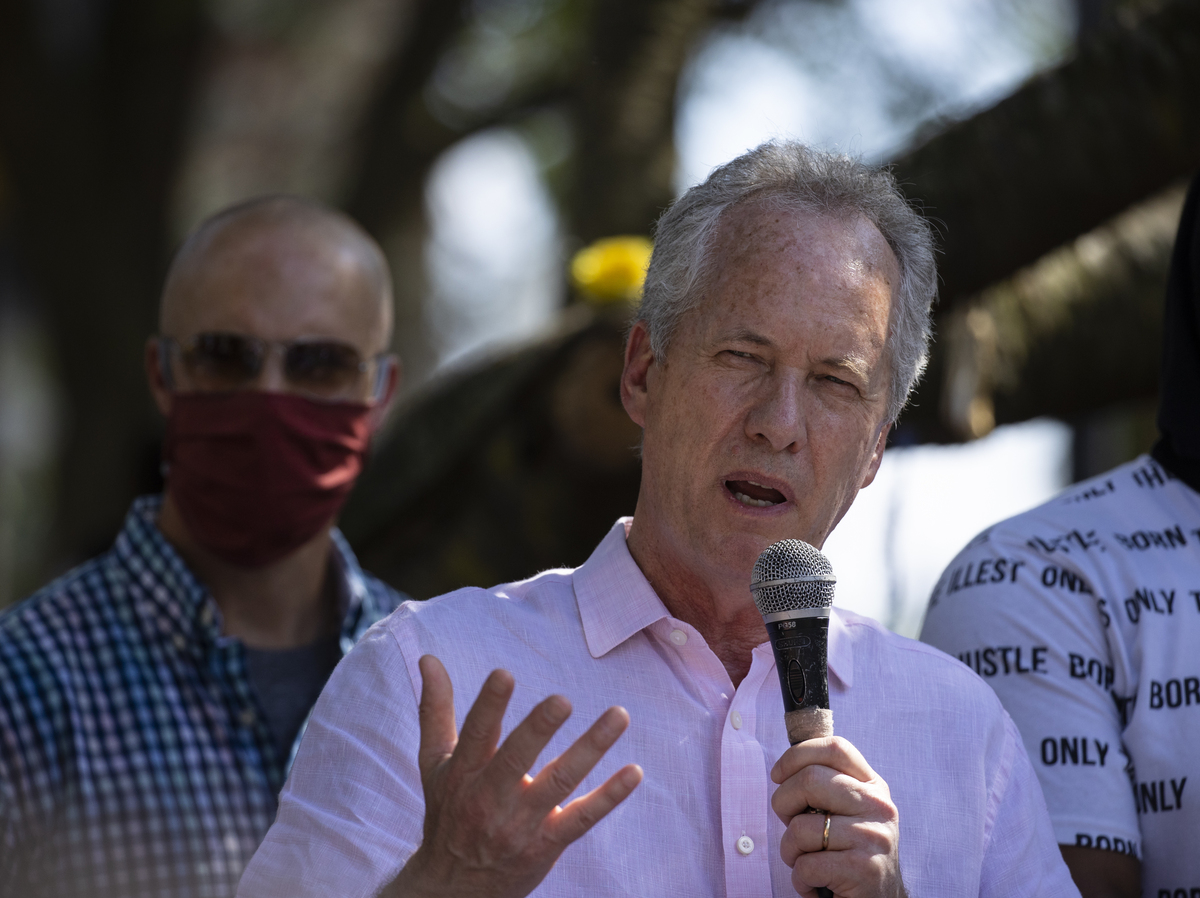 Louisville Mayor Greg Fischer speaks to a group gathered for a vigil in memory of Breonna Taylor on June 6.

Louisville youth confronted Mayor Greg Fischer on Sunday, pressing for answers about whether he values Black lives and why he waited so long to speak out on the police killing of Breonna Taylor.

Darryl Young, who works with youth through his job at the Muhammad Ali Center, served as an informal liaison to get the group together to meet with Rev. Jesse Jackson, who arrived in Louisville Saturday to join protests and speak against police violence. Young said the group included members of the city's Youth Implementation Team and other young adults from Louisville.

The Youth Implementation Team is made up of 14- to 24-year-olds who advise the mayor for a year and "have an opportunity to learn to increase advocacy skills and be more civically engaged in their communities," according to the city.

The video, which is no longer visible on Facebook, lasts about seven and a half minutes, though the meeting started about half an hour earlier, at 1 p.m. Young said Jackson came in first and addressed the group for about 10 minutes. Then he left, and Fischer entered. The video appears to capture the second half of his conversation with the group.

"Why were you silent for two months on Breonna Taylor's murder?" one young woman asked the mayor.

"Louisville was amongst the first cities in the country to put out, 24 hours after every officer-involved shooting, everything that we know," he said. "We did that on Breonna's case as well."

The young woman who asked immediately pushed back.

"No. Your ass was not on any media news station denouncing these racist police officers," she said. "This continually keeps happening. Do you just think Black and brown people are disposable, especially Black people?"

She demanded he answer. He said, "Of course not."

"Then why do you act like it? 'Cause your actions speaks louder than words," she said.

"Well, I'm sorry they do to you," Fischer said. He started another sentence that was immediately drowned out by the group.

"If you want to take care of our community, then actually listen to them," another youth said.

"Are you tired because you've been going through s*** for a couple days?" another youth asked. "We tired. We go through this s*** every day."

They raised concerns about everything from the curfew implemented — then lifted — during protests last week, to the city's response in 2018 to protests outside the Federal Building calling for the Immigration and Customs Enforcement agency to be abolished.

Thousands have taken to Louisville streets to protest against police violence and demand justice for Taylor, who was killed by police during a middle-of-the-night raid that was focused on a different person who lived elsewhere.

The youth criticized Fischer for what they saw as surface-level conversations designed to make him look good in the media.

'Love, Support For One Another, Resistance': What Protests Look Like In Louisville

'Love, Support For One Another, Resistance': What Protests Look Like In Louisville

"You've been using us for photo ops for years," one exclaimed.

Young, who is also running for the Metro Council, said that was the tone of the whole interaction. He said he agreed with the point about photo ops.

"I think that was a sentiment by a lot of people in the room," Young said.

Fischer left the room after about 15 minutes. The youth spent the next 20 minutes working on a list of demands, and when Fischer returned, they read them to him and asked him to simply listen instead of responding, Young said.

He said they asked for the city to divest from police, and recruit more social workers to respond to domestic disputes and mental health crises, rather than having police do that. They also asked that he fire and charge the police officers who killed Taylor.

They also asked for another meeting before the end of the month. Young said he expects that to happen.

"People don't want to just hear, well, this is the process or this is how things have to operate," Young said. "I think people want answers now."

In the video, some members of the group also asked whether police would still have a large portion of the city's budget in the next budget.

Fischer said, yes, "they'll still have a bulk of the money." He started talking about more money going toward the Office of Safe and Healthy Neighborhoods and the nonprofit Evolve502, then he was cut off.

"You had all this money but you didn't have money to help the people most affected by coronavirus — Black people have been disproportionately affected," one young woman said.

Louisville has projected a budget shortfall of $69 million for the fiscal year ending in July 2021, and officials say cuts may be necessary. Fischer proposed continuing this year's budget while details about federal aid and the scope of the losses become clearer. The Metro Council is working on and will pass a budget by the end of the month.

On Sunday evening, Jean Porter, a spokesperson for the mayor, issued a statement on Fischer's meeting with the group of youth, via email:

"The Mayor appreciated bringing several youth together with Reverend Jesse Jackson earlier today. They shared their anger and their pain, and the Mayor acknowledged the gulf between where we are and where we need to be. Young people are at the forefront of the protests, and the Mayor believes they must be at the forefront of the transformation necessary for our city, state and nation to move forward. He has pledged to work with them to make it happen."

This story was originally published on WFPL.org.