Accessibility links
Chicago Tackles COVID-19 Disparities In Hard-Hit Black And Latino Neighborhoods The mayor calls the coronavirus a public health "red alarm." She has deployed a Racial Equity Rapid Response Team to fight the disease in black and Latinx neighborhoods. 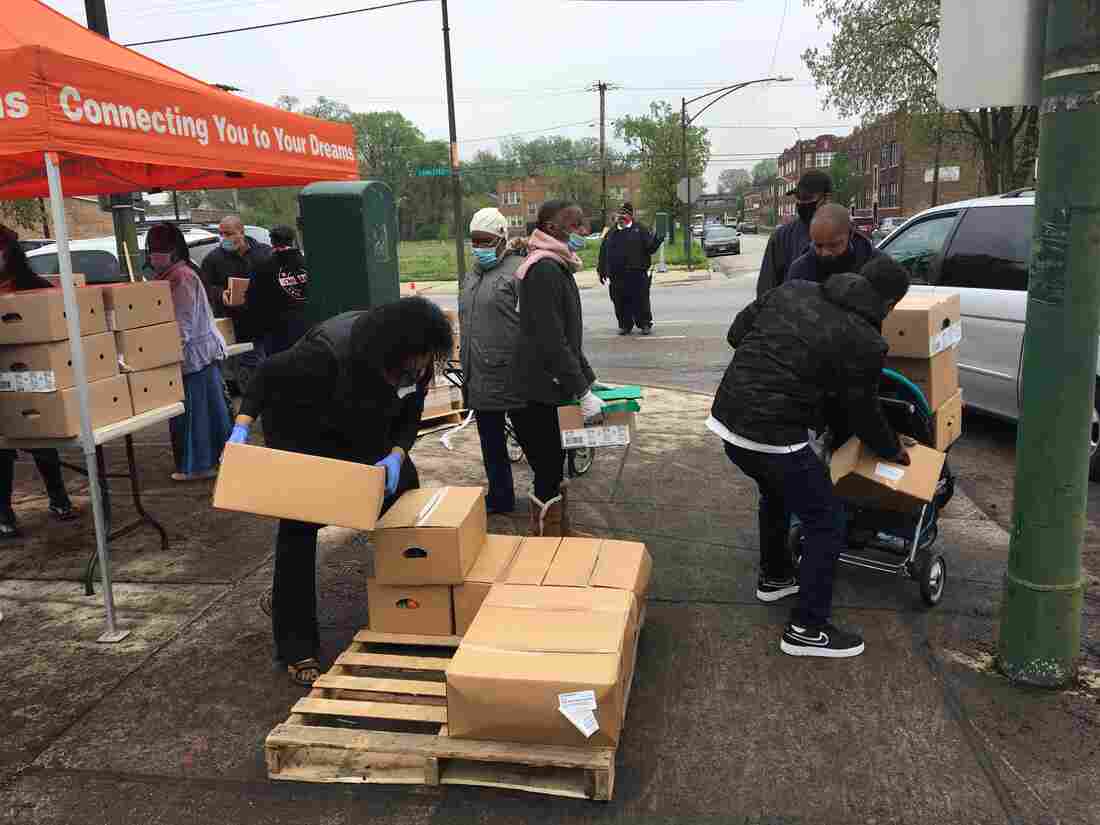 Residents of the Auburn Gresham neighborhood in Chicago line up for boxes of food at a weekly pop-up food pantry. Cheryl Corley/NPR hide caption 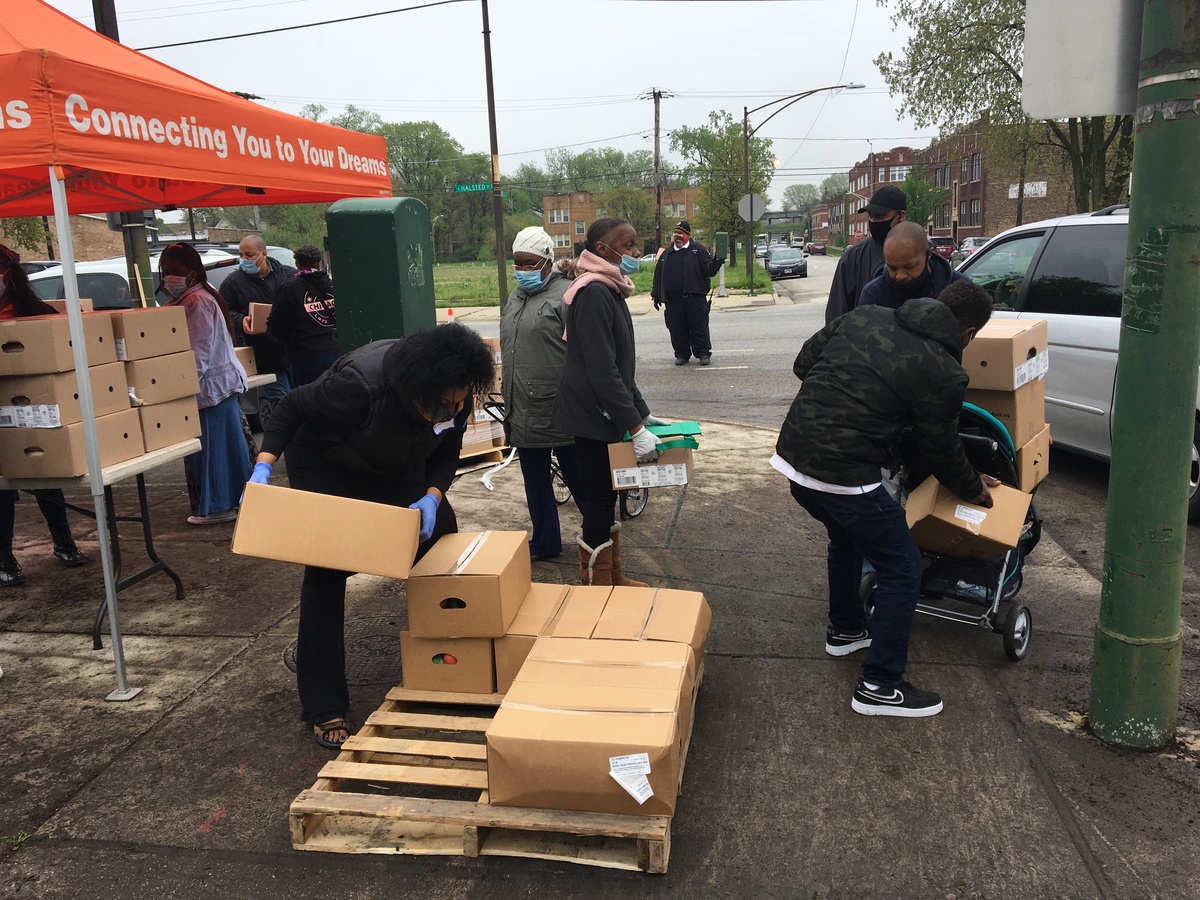 Residents of the Auburn Gresham neighborhood in Chicago line up for boxes of food at a weekly pop-up food pantry.

When COVID-19 first hit the United States, it spread through communities of color at alarmingly disproportionate rates.

This was especially true in Chicago. More than 70% of the city's first coronavirus deaths were among African Americans. Those numbers have declined, but black residents continue to die at a rate two to three times higher than the city's white residents. Researchers believe underlying health conditions that are prevalent in Latinx and black communities, such as hypertension and diabetes, make residents there more vulnerable to the disease.

While black residents suffer the most deaths, the number of people who have contracted the disease is the highest now in the city's Latinx communities. Chicago Mayor Lori Lightfoot calls it a public health "red alarm." She has worked with community groups to create a Racial Equity Rapid Response Team or RERRT. They are tackling long-standing needs for residents in African American and Latinx neighborhoods — everything from adequate nutrition to jobs to health care.

One of those Chicago neighborhoods is Auburn Gresham. It's a predominantly African American and working class area on the city's South Side. It has seen its share of troubles — 30% unemployment, gang warfare. Then came COVID-19.

The first to die was Patricia Frieson, 61, a retired nurse who lived in the neighborhood. Her older sister, Wanda Bailey, 63, also died from the coronavirus days later.

Recently, a drive-in test site opened on 79th Street, one of the main commercial strips that has seen better times.

"Oh, this is critical. We've been screaming for weeks to get testing in Auburn Gresham," says Carlos Nelson, CEO of the Greater Auburn-Gresham Development Corp. He says it has been dire with more than 1,000 confirmed coronavirus cases and "we are dying, because we don't have the same resources or access to information."

Mayor Lightfoot says the racial gap is unacceptable and is the result of a racist system that for generations left black neighborhoods with little access to health care, jobs, education and healthy food — conditions, she adds, that aren't unique to Chicago.

"We're seeing this manifest in large urban areas with large black populations," says Lightfoot. "All over the United States — Cleveland, Detroit, Milwaukee and other places are experiencing the same thing, but we are going to step up and do something about it."

Distributing free masks, hundreds of door hangers and thousands of postcards about COVID-19 is part of the effort by the rapid response team.

"I've not been able to service as many people as I have been because a lot of people are afraid to let people in their home," Bowers says.

She has been working eight hours a week instead of her typical 30 to 35 hours. But Bowers considers herself lucky since she and her adult children live with her mother. She says everyone chips in, but "the food pantry is a real help to the family because I am not able to buy food."

In Chicago's Latinx neighborhoods, there's the same push by RERRT to educate people about the pandemic with bilingual messaging. There's also a focus on workplaces where there has been a cluster of coronavirus cases. Unions are part of the outreach effort.

Efrain Elias is vice president and residential division director of SEIU Local 1. The union represents janitors, security officers and others.

"These are workers who are heading to the front line of this crisis to keep the public clean, safe and healthy every day and our workers are not able to stay at home," Elias says.

In a neighborhood near Chicago's downtown, the sound of a vacuum cleaner dies down as Javier Flores goes over the day's cleaning schedule with his maintenance crew at a nearly 200-unit residential building.

"Thank God, we haven't had any cases here or any type of incidents whatsoever," Flores says. Both he and his wife are considered essential employees. She is a cook for the Chicago Public Schools and prepares free breakfast and lunch for students that families pick up.

The couple live with their two young daughters in Chicago's Belmont-Cragin area. With nearly 3,000 confirmed cases, it's one of the Latinx communities with the most coronavirus cases in the state. It also makes Flores anxious.

His daughter turned out to be fine. Flores says he hopes the city's racial equity work will help make that true for so many others in communities of color hard-hit by the COVID-19 pandemic.