Accessibility links
COVID-19 Infections, Deaths Higher Among Those With Intellectual Disabilities There's growing evidence of high rates of death from COVID-19 for a population that doesn't get a lot of attention: people with intellectual and developmental disabilities.

Listen · 4:34 4:34
COVID-19 Infections And Deaths Are Higher Among Those With Intellectual Disabilities 4:34

People with intellectual disabilities and autism who contract COVID-19 die at higher rates than the rest of the population, according to an analysis by NPR of numbers obtained from two states that collect data. They also contract the virus at a higher rate, according to research looking into group homes across the United States.

In Pennsylvania, numbers obtained by NPR show that people with intellectual disabilities and autism who test positive for COVID-19 die at a rate about twice as high as other Pennsylvania residents who contract the illness.

In New York, the state with the most deaths from COVID-19, people with developmental disabilities die at a rate 2.5 times the rate of others who contract the virus.

The numbers in Pennsylvania are compiled by the Office of Developmental Programs of the Pennsylvania Department of Human Services and count people who get state services while living in group homes, state institutions or in their own homes. As of June 2, there were 801 confirmed cases and 113 deaths among people with intellectual disabilities and autism. In New York, NPR calculated data obtained from the New York State Office for People with Developmental Disabilities. Of people who get state services from that office, 2,289 have tested positive for COVID-19 and 368 have died.

The high rate of death "is disturbing, but it's not surprising," says Scott Landes, an associate professor of sociology at Syracuse University's Maxwell School of Citizenship and Public Affairs.

He's been collecting his own data from state and private research groups and says people with developmental disabilities who live in group homes have some of the highest death rates from COVID-19 in the country.

That's higher than the death rates for Hispanics and African Americans.

Landes co-authored a recent study that used private health records to show that 18- to 74-year-olds with developmental disabilities, mostly those diagnosed with autism, who contracted COVID-19 died at nearly twice the rate as others.

Landes says there are two reasons for the high death rates. People with developmental disabilities are far more likely to have a preexisting health condition, such as respiratory disease, that adds to their risk. They're much more likely, than even elderly people, to live in a setting with roommates and staff like group homes where two or four or 10 or more people live together. About 13% to 20% of people with developmental disabilities live in such settings, Landes notes, compared with only about 6% of people over age 65.

"You reside with multiple roommates, with staff coming in and out," says Landes, "your chances of actually contracting COVID are high. And then if someone in your home gets it, it's like there's nowhere you can go."

There has been a lot of attention to the deaths in nursing homes, and with good reason. About a third of all deaths nationwide from COVID-19 have been linked to them. According to the federal Centers for Medicare & Medicaid Services, there have been at least 31,782 deaths of nursing home residents from COVID-19 as of May 31. The CMS total does not count nursing home staff who died. 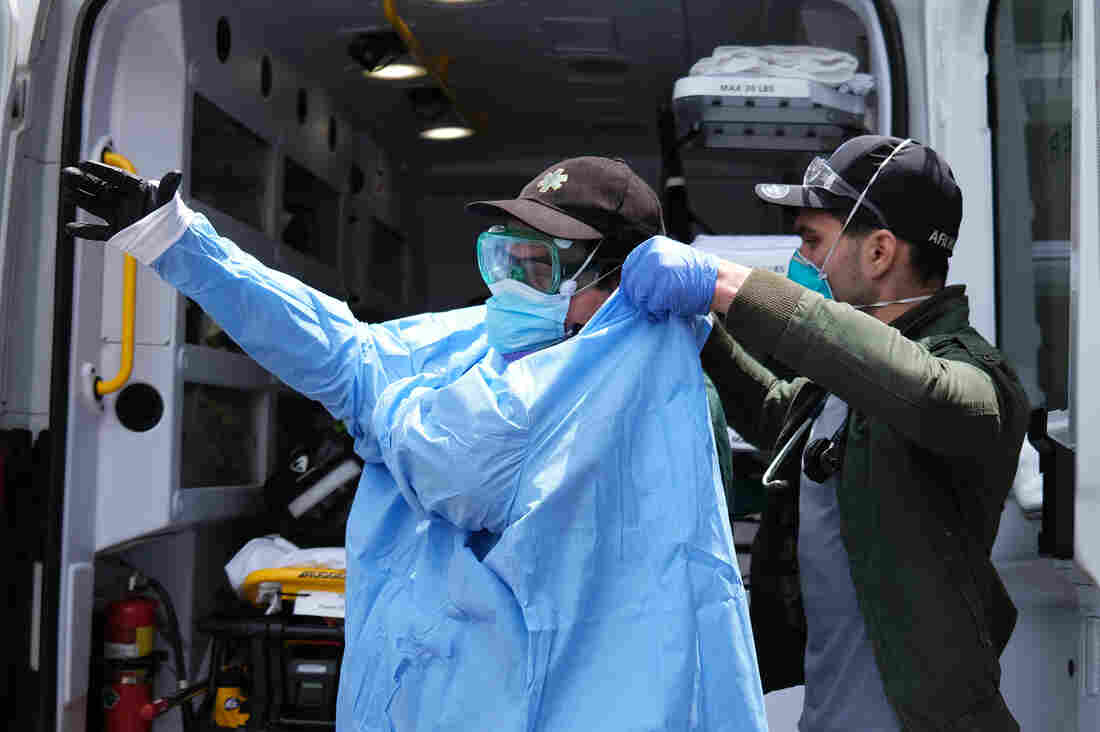 Medics suit up in personal protective equipment as they prepare to pick up a patient in severe respiratory distress from a group home in the Borough Park neighborhood of Brooklyn on May 11. Spencer Platt/Getty Images hide caption 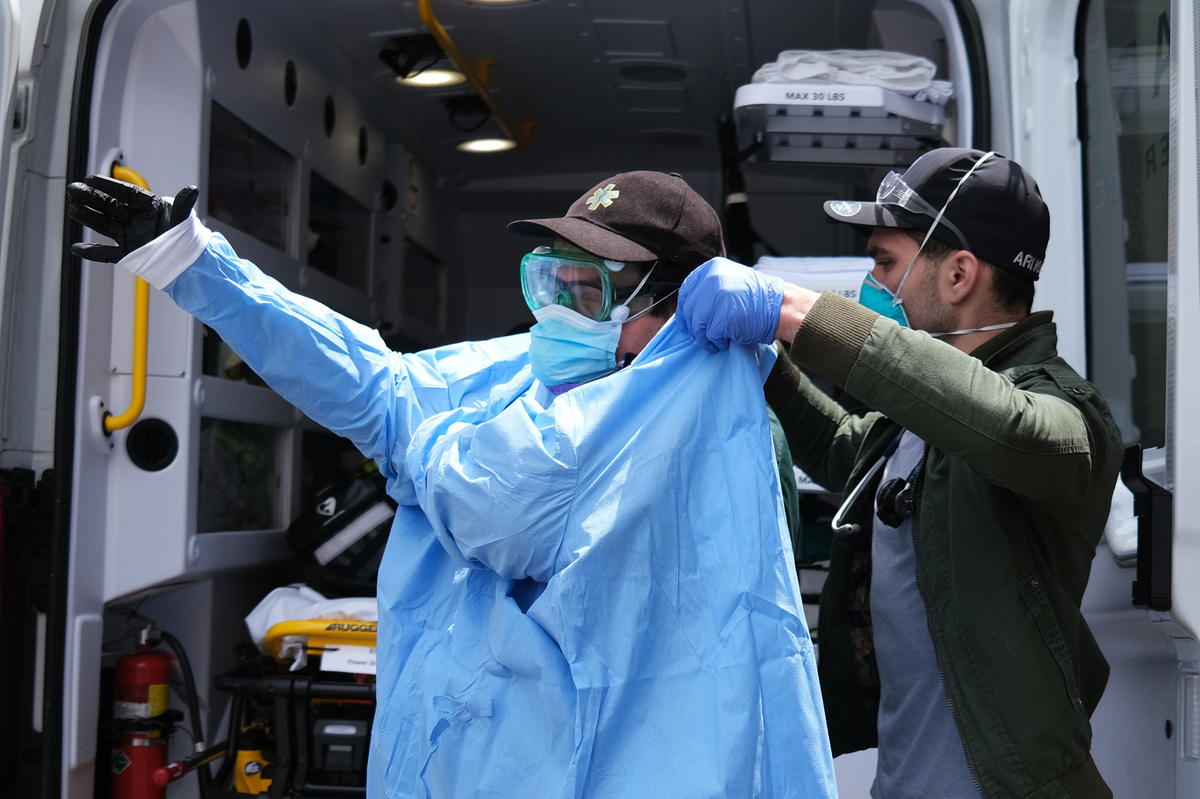 Medics suit up in personal protective equipment as they prepare to pick up a patient in severe respiratory distress from a group home in the Borough Park neighborhood of Brooklyn on May 11.

Still, says Nicole Jorwic, senior director for public policy at the Arc, a group that represents people with intellectual and developmental disabilities, there are consequences to paying less attention to people who live in other care home settings.

One result, she says, is that it has been harder for the groups that serve people with disabilities to get personal protective equipment or extra pay for staff workers. In most states, these workers don't get the bonus pay that is sometimes offered to other front-line health care workers and, in some states, the staff who serve people in group homes or their own homes aren't considered essential workers.

"You don't go into a hospital and some doctors have on masks and some don't. Or some are underpaid and some are not," says Antonio McCall, a direct service provider who works with two men at a Philadelphia group home. "No, everyone gets what they're working for. Everyone's covered with protection, because that's what's required."

There have been no infections at the house where McCall works, but there have been some outbreaks of COVID-19 — and even a death — at others. He says his agency managed to find masks for him, and he has received some extra pay.

And McCall is careful. He doesn't want to bring an infection into the group home or his own home, where he helps care for his mother, who has an underlying health condition, and is raising his niece and nephew.

In New York, a direct service professional working in a group home makes little money — "at or below the poverty line," in the mid $20,000s a year, says Tom McAlvanah, president of New York Disability Advocates, a coalition of service providers. He says it has been hard to keep workers healthy and on the job. They're vulnerable not only because of where they work, but because they often rely on public transportation.

That's the case in most states, although Colorado and several others did increase Medicaid resources to providers. The CARES Act, the coronavirus relief act signed into law in March, became a source of extra funding, but only through the end of June.

Provider agencies say that, on average, they've spent a third of their annual revenue on unexpected costs from the pandemic and have cash reserves to cover a month or less of operations, according to a recent national survey by the American Network of Community Options and Resources, a trade association for groups that provide services to people with disabilities.

"For years and years and years, people we serve in group homes like this, they're the forgotten people," says Todd Goodwin, who runs John F. Murphy Homes, a large provider agency in Maine. "Nobody sees them. Nobody notices them. We see that repeatedly through policy, we see that in financing at the state and federal level. It's been an issue for years."

In Washington state, there was a Zoom meeting last month of men and women with developmental disabilities who belong to an advocacy group called People First of Washington. They spoke of their opposition to state budget cuts that, they worried, would cut off public transportation that they depend on to get to work or cut the hours of their state-funded caregivers. And they were worried about the effects of the coronavirus.

Shane Cody Fairweather, who lives in his own apartment in Chewelah, Wash., with support from service providers, said in an interview that he worries that people like him are not getting attention, despite their risks for contracting COVID-19.

"We're part of society. We're more vulnerable," he says. "It should be on equal footing. They should be paying attention to the elderly and the disabled as well."

Fairweather says there have been no outbreaks of the coronavirus in the apartments where he lives. He's healthy and ready to return to his job as a janitor at the local library.