Accessibility links
How A U.S. Police Killing Triggered The Toppling Of Statues In U.K. And Belgium The widespread protests sparked by George Floyd's killing are reverberating in Europe, leading to the removal of two statues in the United Kingdom and one in Belgium tied to racist, colonial legacies.

How A U.S. Police Killing Triggered The Toppling Of Statues In U.K. And Belgium

How A U.S. Police Killing Triggered The Toppling Of Statues In U.K. And Belgium 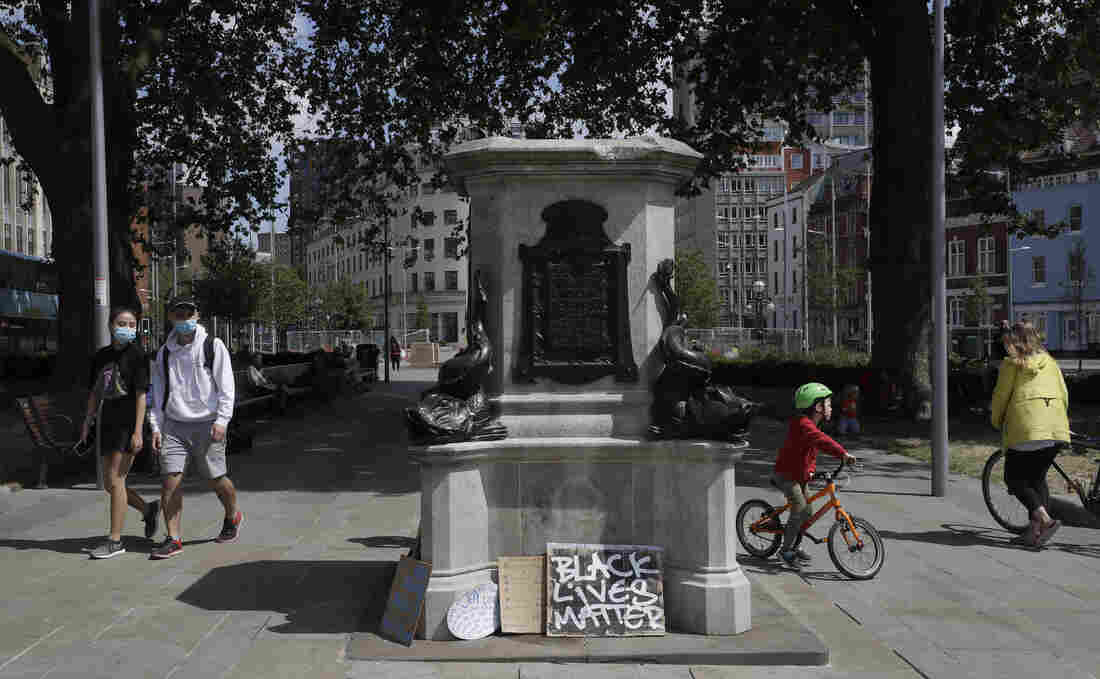 People look at the pedestal of the toppled statue of Edward Colston in Bristol, England, on Monday, following the downing of the statue on Sunday at a Black Lives Matter protest. Colston was a notorious slave trader — a badge of shame in what is one of Britain's most liberal cities. Kirsty Wigglesworth/AP hide caption 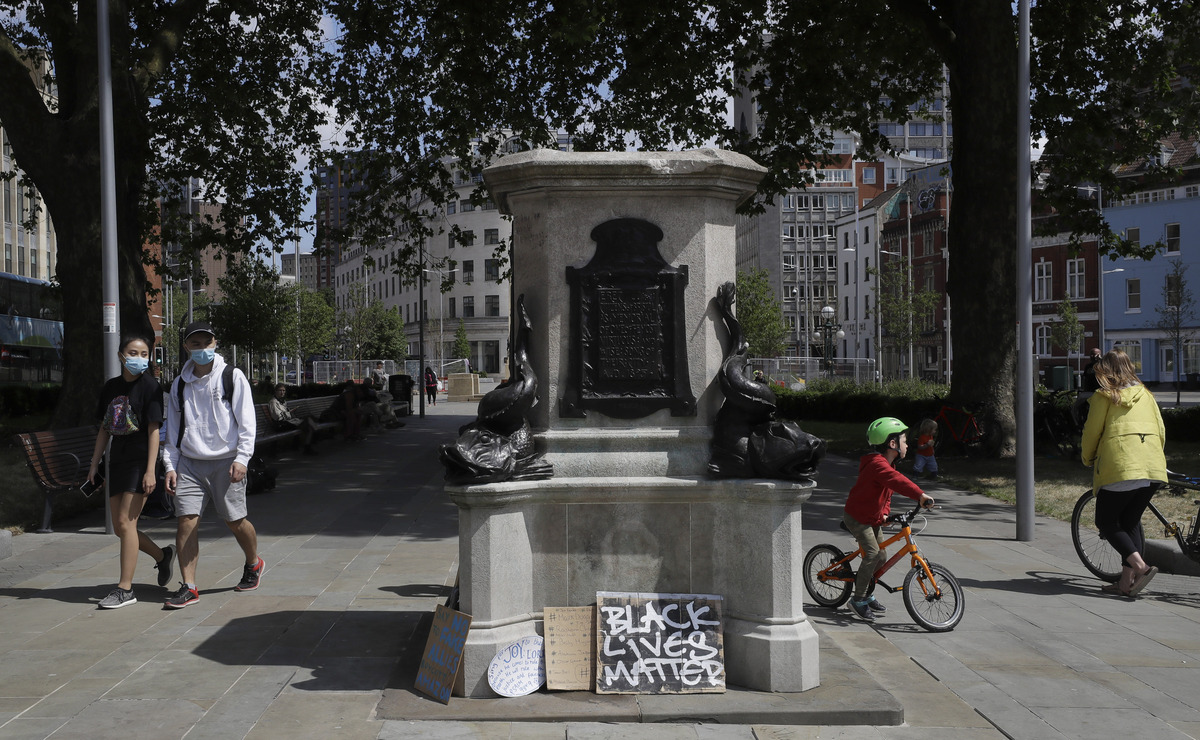 People look at the pedestal of the toppled statue of Edward Colston in Bristol, England, on Monday, following the downing of the statue on Sunday at a Black Lives Matter protest. Colston was a notorious slave trader — a badge of shame in what is one of Britain's most liberal cities.

The widespread protests that began in the United States are now reverberating through Europe, leading to the removal of two statues in the United Kingdom and one in Belgium with racist, colonial legacies. 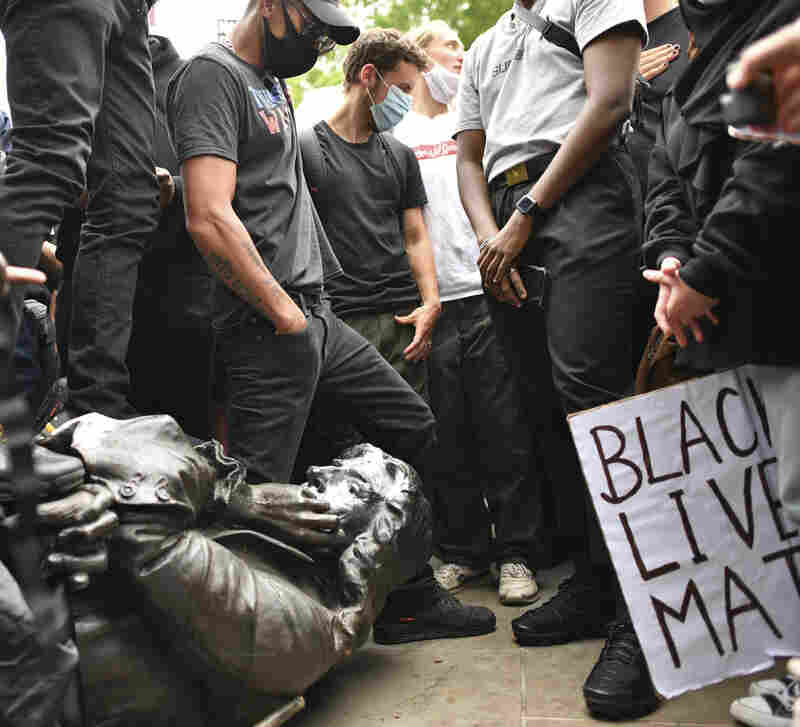 Protesters pull down a statue of slave trader Edward Colston during a Black Lives Matter protest on College Green, Bristol, England, on Sunday. The protest grew in response to the recent killing of George Floyd by police officers in Minneapolis that sparked large demonstrations across the United States and spread to other countries. Ben Birchall/AP hide caption 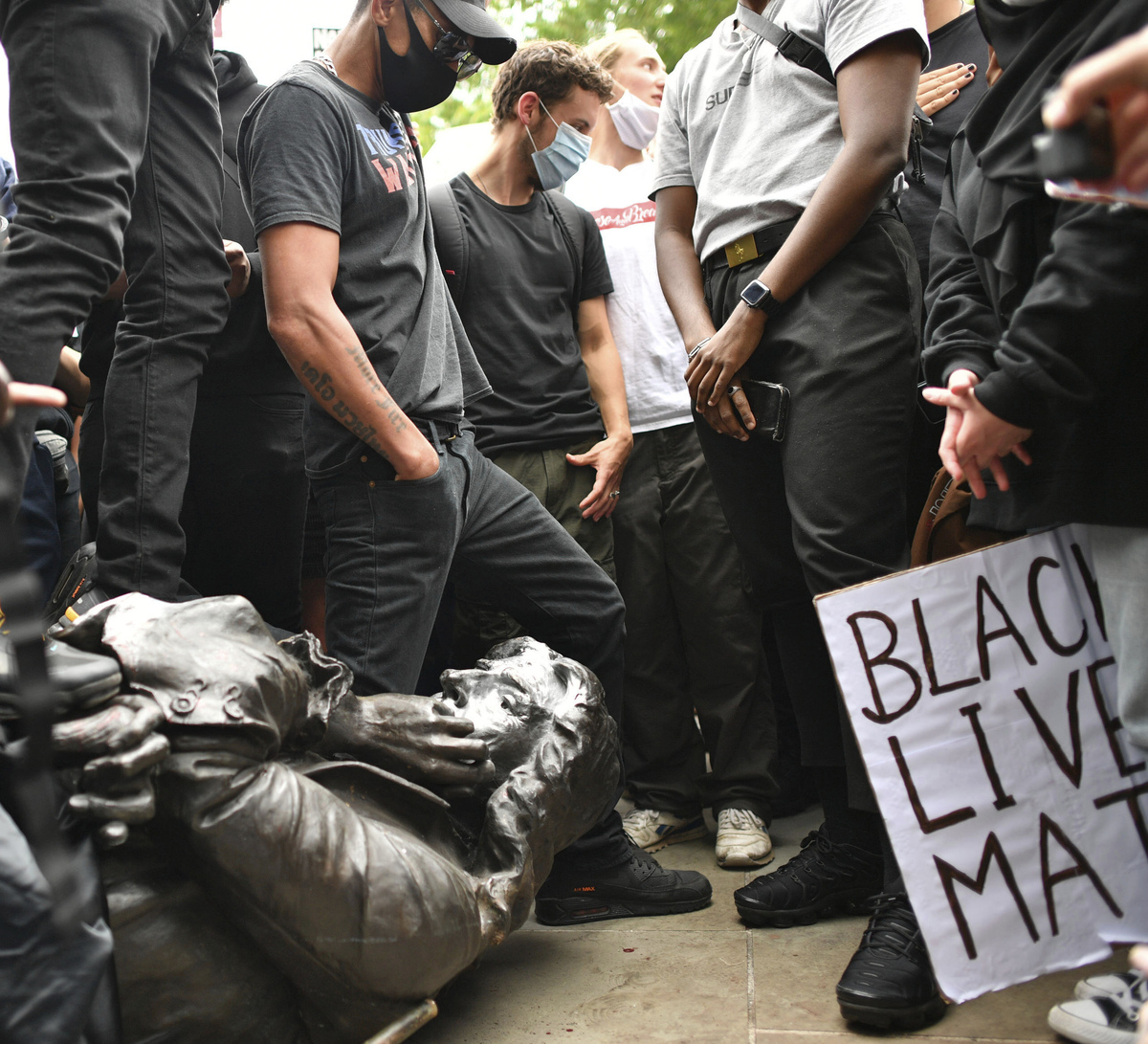 Protesters pull down a statue of slave trader Edward Colston during a Black Lives Matter protest on College Green, Bristol, England, on Sunday. The protest grew in response to the recent killing of George Floyd by police officers in Minneapolis that sparked large demonstrations across the United States and spread to other countries.

On Tuesday evening, officials in London removed a statue associated with Britain's slave trading past. It followed activists toppling a statue in Bristol, England, and authorities in Belgium taking down a monument to a former king.

The moves come after the police killing of George Floyd in Minneapolis set off mass protests across the U.S. and fueled movements against racism in Europe and other parts of the world.

On Sunday, a group at a Black Lives Matter protest toppled the statue of Edward Colston in the southwestern English city of Bristol. They rolled it through the streets and then pushed it into the green waters of the harbor where it promptly sank amid a swirl of bubbles.

It was a dramatic fall — literally and figuratively — for a deeply divisive statue that celebrated Bristol's biggest philanthropist, who made his fortune from the slave trade. In the late 1600s, Colston led Britain's Royal African Company, which transported more than 80,000 enslaved people to the New World in exchange for tobacco, sugar and rum.

In less than an hour and a half on Sunday, the protesters in Bristol succeeded where lobbying and negotiation had failed.

"It was an electrifying atmosphere," said Michael Jenkins, a filmmaker who has been documenting the battle over Colston's place in the city. "I think people just thought, 'Well, today is the day he's got to go.' "

Then on Tuesday morning, London Mayor Sadiq Khan said a commission would review statues and landmarks in the British capital, saying that those with links to slavery should go.

In the evening, local officials removed the statue of Robert Milligan, who in the early 19th century helped build London's West India Docks, which facilitated the trade of sugar and enslaved people.

London was once the world's fourth-largest slaving port.

"I don't condone at all any attacks on our police or any disorder or criminal damage," Khan told Britain's Sky News, "but we've got to recognize that our public realm, statues, squares, street names don't accurately reflect our values, or London, in 2020."

Earlier Tuesday, in the Belgian city of Antwerp, authorities took down a statue of King Leopold II and placed it in a museum. Protesters had burned and vandalized the statue of the Belgian king, whose colonial regime was responsible for the death and mutilation of millions of Congolese people at the turn of the 20th century.

"It's about time [the Leopold statue was removed], because he killed more people than Hitler and he was still there in 2020," said Laura Uwinema, a onetime refugee from Rwanda in Belgium, as she walked by the monument site in Antwerp — now little more than a pile of bricks.

Walking with her two young children, Uwinema said no matter where she would go in the neighborhood, she had to see the towering statue, which she said was "torture."

U.K. Lawmaker: 'George Floyd Protests Sparked Something Around The World'

"I'm so happy! I hope all the Leopold II's will go away," she said.

The authorities acted faster than anyone predicted, according to Belgian historian Idesbald Goddeeris. "These processes are very gradual and what will happen in the short term is a polarization of society, which is very unfortunate, of course," he said.

I grew up in Bristol. I detest how Edward Colston profited from the slave trade.

But, THIS IS NOT OK.

If Bristolians wants to remove a monument it should be done democratically - not by criminal damage. https://t.co/Wfz47zQQZU

Bristol "was getting nowhere"

Activists in Bristol have spent years trying to either remove Edward Colston's name from institutions in the city or at least provide historical context to his complicated role. The statue, which was erected in 1895, had a plaque that described Colston as one of Bristol's "most virtuous and wise sons." In 2018, the local government considered a second plaque to acknowledge Colston's role in perpetuating the slave trade.

"This, you would think, would be quite a good way, a straightforward way of saying, 'he's still here, but he did bad things,' " said Kate Williams, a British historian. "But unfortunately, it then proved impossible for the council to find a wording that everyone could agree on."

Among other things, the proposed wording for the new plaque said Colston played "an active role in the enslavement of over 84,000 Africans (including 12,000 children) of whom over 19,000 died en route to the Caribbean and America." It added that: "Bristolians who did not subscribe to his religious and political beliefs were not permitted to benefit from his charities."

Williams said Colston supporters, including an organization called the Society of Merchant Venturers, wanted to remove the reference to children and focus more on Colston's philanthropy, which included funding for schools, hospitals and the local concert hall.

"The city was getting nowhere," Williams recalled.

In the end, the fate of Colston's statue was not resolved by consensus in Bristol, but by a killing on a sidewalk six time zones away in Minneapolis. The death of George Floyd reminded people here of the United Kingdom's struggles with racism, its role in the slave trade as well as its imperial history, which continues to divide Britons.

Clive Lewis, a member of parliament in Britain's opposition Labour Party, said if not for Floyd's killing, Colston's statue would still be standing today. "I think that the George Floyd protests sparked something around the world, something that had been brewing for a long time," said Lewis, who is black. "Part of the tinder was the COVID-19 lockdown [and] the unemployment. Now, you're at a point where what happens to George Floyd means people felt enough was enough."

Lewis and many other politicians said they wished the statue had been removed through a legitimate, democratic process. Priti Patel, Britain's hard-line home secretary and member of the ruling Conservative party, called the toppling an act of vandalism. Sajid Javid, another Conservative Party member who also served as home secretary, agreed.

"I grew up in Bristol," Javid wrote on Twitter. "I detest how Edward Colston profited from the slave trade. But, THIS IS NOT OK. If Bristolians [want] to remove a monument it should be done democratically - not by criminal damage."

Bristol police are pursuing the people who tore down Colston's statue. Marvin Rees, the mayor of Bristol, is also encouraging Sunday's protest crowds to socially isolate given the ongoing pandemic. Rees, who is also black, said he saw the statue as a personal affront, but intends to have the city fish it out of the harbor and probably put it in a museum.

"What's happened to the statue is now a part of the city's history," Rees told Sky News, "a part of that statue's story."

Some in Bristol, though, would prefer the statue remain at the bottom of the harbor.

"I think it's such an appropriate, rusty, watery, undignified grave for Colston," said Katie Finnegan-Clarke, who helped found Countering Colston, which lobbies for the removal of Colston's name from Bristol's institutions.

Finnegan-Clarke says she doesn't want her tax money paying for a heated room to display the statue. Nor does she have faith the city will finally present the full story around Colston.

"I don't trust them to contextualize it properly," said Finnegan-Clarke. "Up to now, they've completely messed it up every time."