Accessibility links
Georgia Primary: Long Lines, Equipment Problems In the city of Atlanta, voters waited upwards of three hours at some polling places as social distancing measures decreased the number of voting machines and people inside a polling place at one time. 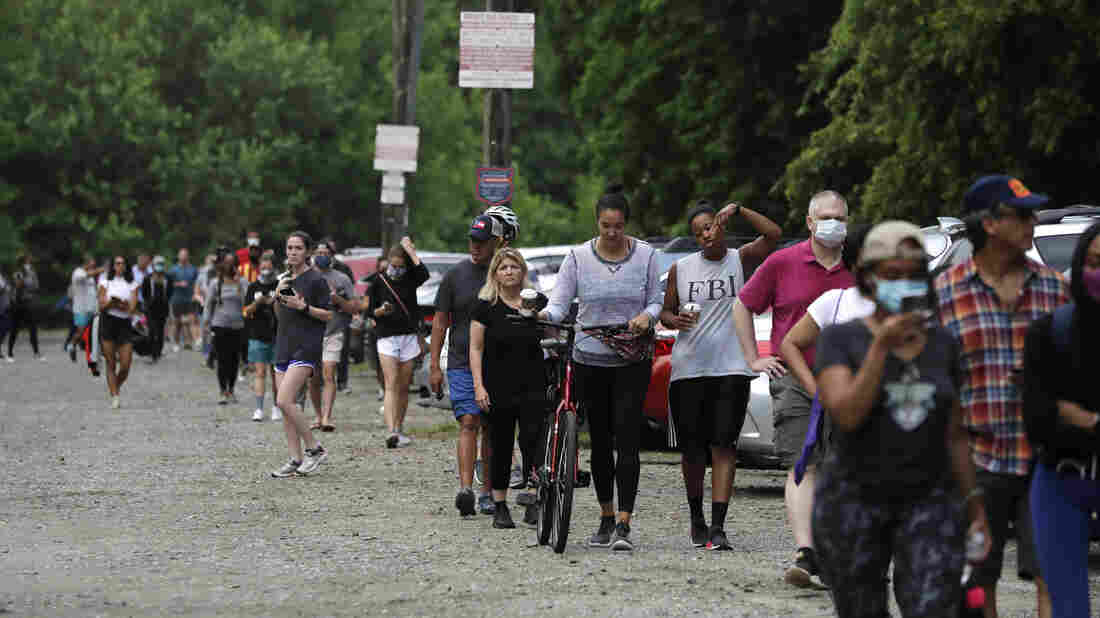 People wait in line to vote in the Georgia's primary election at Park Tavern in Atlanta on Tuesday. Brynn Anderson/AP hide caption 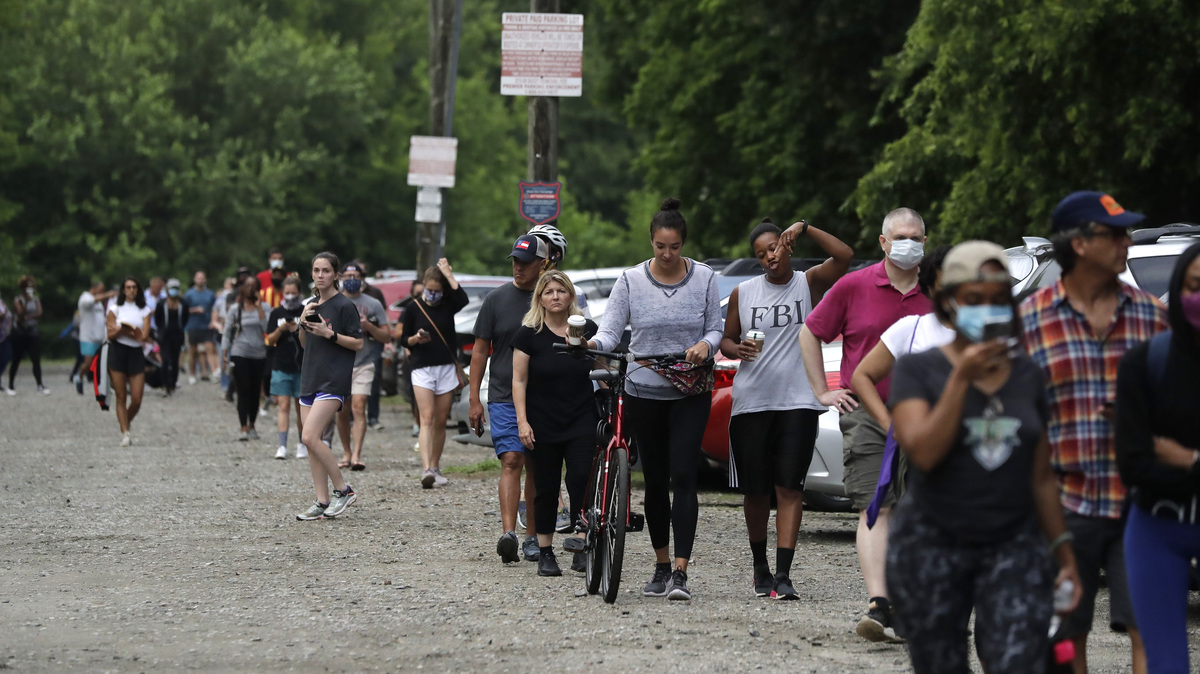 People wait in line to vote in the Georgia's primary election at Park Tavern in Atlanta on Tuesday.

Voters across Georgia experienced long lines at the polls and widespread issues with a new $104 million voting system in the state's Tuesday primary.

In the city of Atlanta, voters waited upwards of three hours at some polling places as social distancing measures decreased the number of voting machines and people inside a polling place at one time.

At Park Tavern, a restaurant and event space where more than 16,000 Atlantans were assigned to vote after two polling places backed out, more than 350 people were lined up before polls opened at 7 a.m.

Polls in some locations were extended by a couple of hours. In Union City, which had long waits earlier in the day, many were still lined up even before the later closing time:

More than 30 min after polls were supposed to close (they’re now open until 9pm), there are still hundreds of people in line here at Christian City. #gapol pic.twitter.com/DLz4Wu4EXX

Anita Walker showed up to vote at Sandtown Recreation Center in South Fulton County at 6:40 a.m., only to cast her ballot at 10:45 a.m.

"We stood here for an extremely long time before we even knew anything and then we had to continue to wait for them to come back up so it was very chaotic this morning."

Elsewhere, precincts were delayed in opening after poll managers were not given correct access codes to set up the touchscreen ballot-marking devices that print out a paper ballot with a voter's choices.

In DeKalb County just east of Atlanta, problems with voting machines in one precinct led officials to use backup paper provisional ballots — until those quickly ran out.

"America has gotten to the point that we are now taking the liberties of people, even voting, from them. How can we do this?" said 80-year-old Anita Heard. 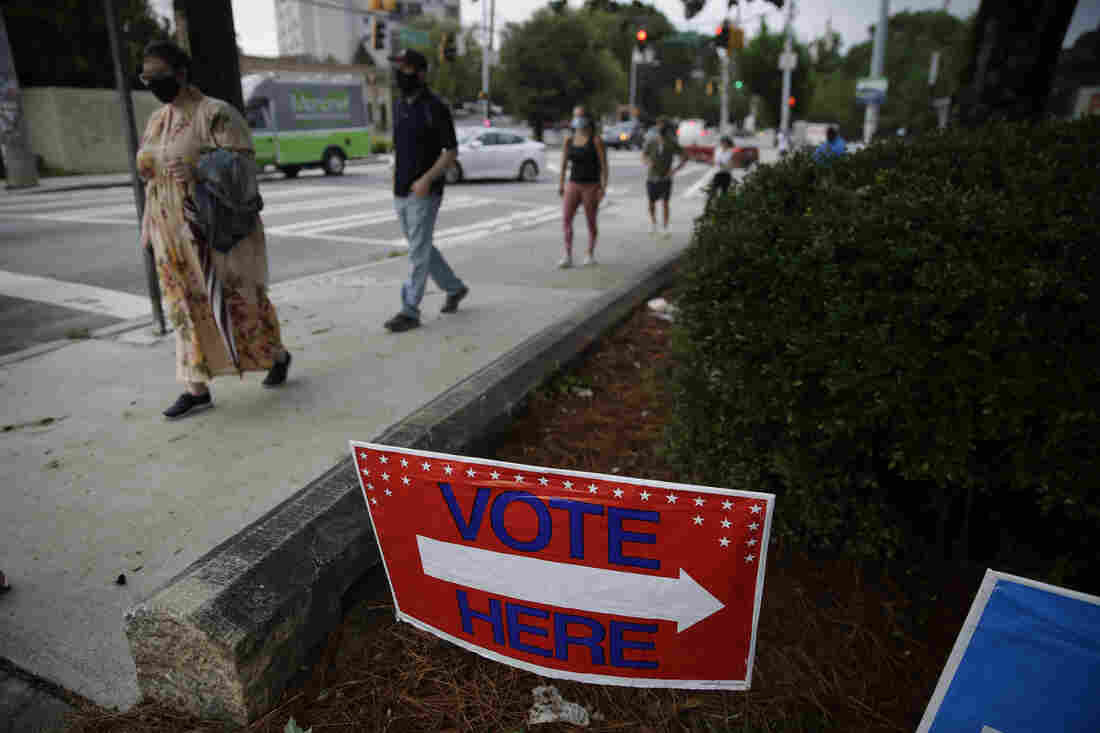 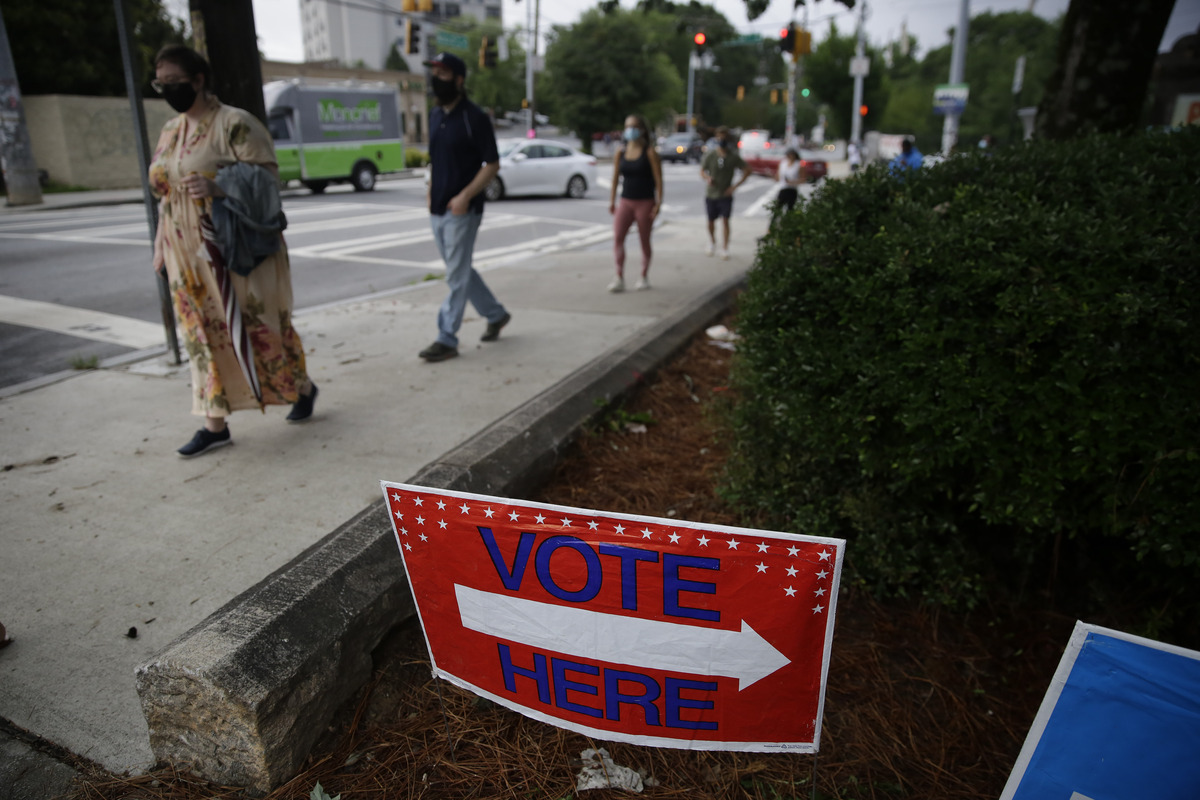 People wait in line to vote in Georgia's primary election in Atlanta on Tuesday. Long lines and equipment problems are hampering the twice-delayed primary.

"I have put in several voice messages detailing what we need and what assistance [we need]," Bames said. "No response."

If you are in line, PLEASE do not allow your vote to be suppressed. PLEASE stay in line. They should offer you a provisional ballot if the machines are not working. https://t.co/1lVu3rEsCg

Republican Secretary of State Brad Raffensperger's office said there were no reports of actual equipment issues and blamed officials in some of the state's biggest counties for any problems at the polls. It also said it was launching an investigation into the problems.

"We do have reports of equipment being delivered to the wrong locations and delivered late, we have reports of poll workers not understanding setup or how to operate voting equipment," a spokeswoman said. "While these are unfortunate, they are not issues of the equipment but a function of counties engaging in poor planning, limited training, and failures of leadership. Well over 2,000 precincts are functioning normally throughout the state of Georgia."

"Obviously, the first time a new voting system is used there is going to be a learning curve, and voting in a pandemic only increased these difficulties," said Raffensperger in a statement. "But every other county faced these same issues and were significantly better prepared to respond so that voters had every opportunity to vote."

Georgia's primary has already seen record-setting turnout for a contest that features a competitive Democratic U.S. Senate primary, several competitive U.S. House races and every state lawmaker on the ballot. More than 1.3 million voters cast their ballots ahead of Election Day – 1 million of those by mail.

In the weeks leading up to the election, more than 10% of Georgia's polling places have relocated because of COVID-19 concerns. In metro Atlanta more than 80 polling places were closed and consolidated ahead of Election Day.

This isn't the only pandemic-related disruption to voting in the state. Georgia twice postponed its primary this spring as the coronavirus began spreading.

Election administration in Georgia has come under scrutiny in the past several years with Democrats and civil rights groups accusing Raffensperger and his predecessor, now-Gov. Brian Kemp, of attempting to suppress voters by aggressively cleansing the state's voter rolls and encouraging polling places to consolidate.

Presumptive Democratic Nominee Joe Biden called the breakdowns "completely unacceptable" and a threat to free and fair elections. "We only have a few months left until voters around the nation head to the polls again, and efforts should begin immediately to ensure that every Georgian — and every American — is able to safely exercise their right to vote," he said in a statement.

The 2018 midterms were also marked by long lines in Georgia, especially in more-densely populated parts of the state.