Accessibility links
No Sign Of Antifa So Far In Justice Department Cases Brought Over Unrest An NPR review of the federal cases brought in connection with the unrest over George Floyd's death does not find any links to the antifa movement. 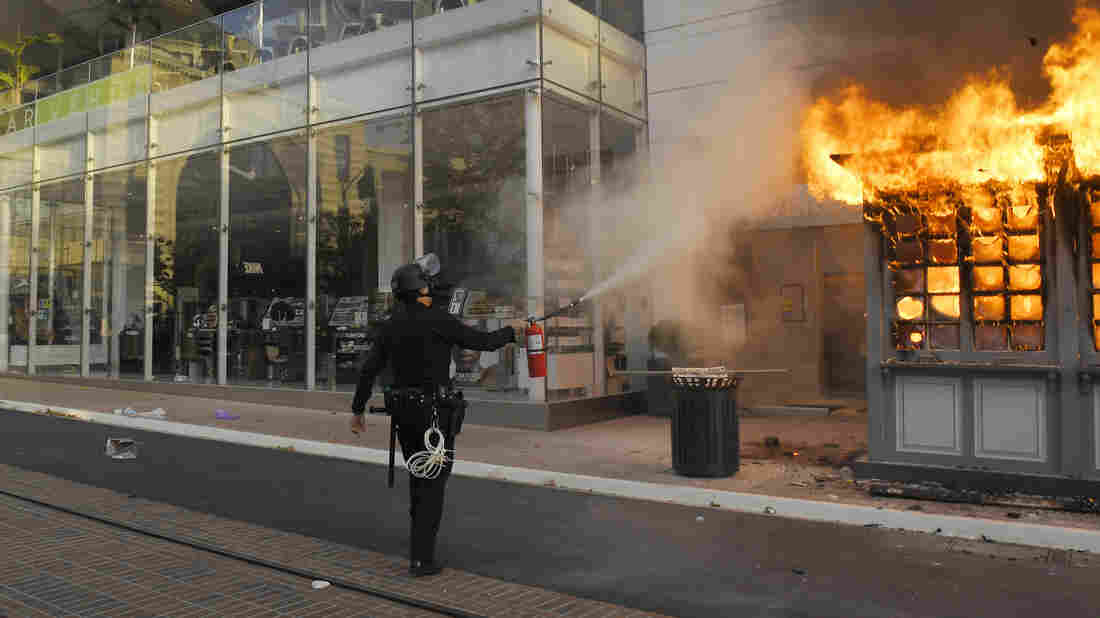 An officer tries to put out a fire at a police kiosk at The Grove shopping center in Los Angeles during a protest last month over the death of George Floyd. Mark J. Terrill/AP hide caption 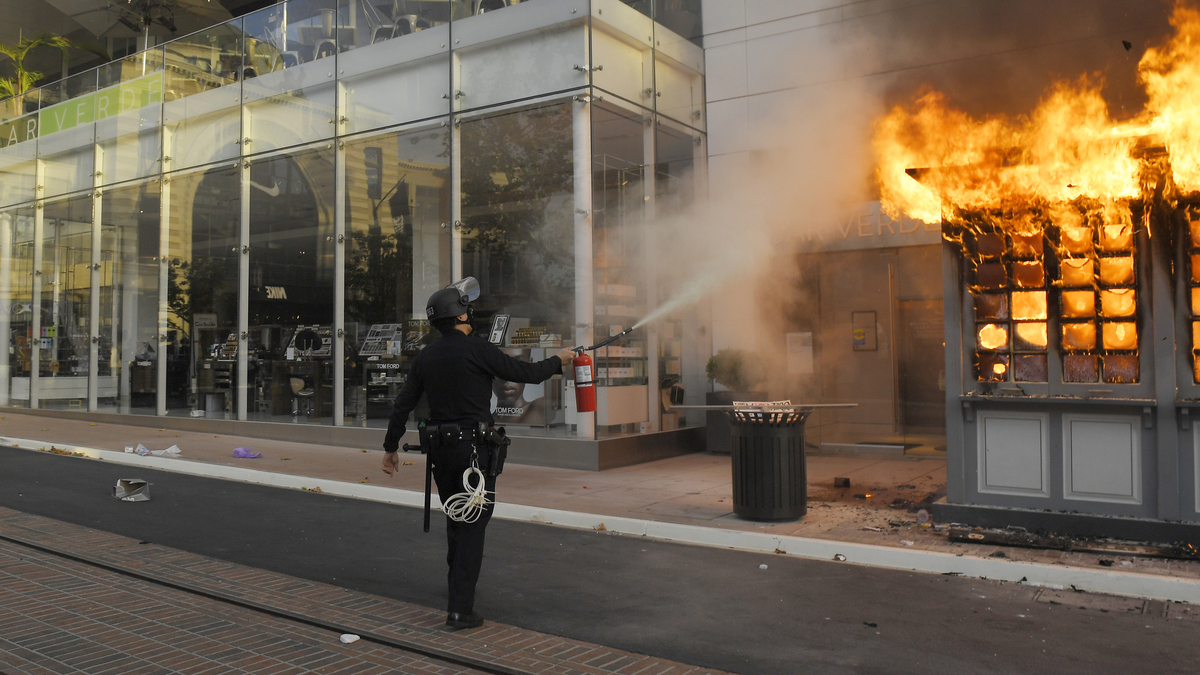 An officer tries to put out a fire at a police kiosk at The Grove shopping center in Los Angeles during a protest last month over the death of George Floyd.

U.S. Attorney General William Barr has repeatedly blamed anti-fascist activists for the violence that has erupted during demonstrations over George Floyd's death, but federal court records show no sign of so-called antifa links so far in cases brought by the Justice Department.

NPR has reviewed court documents of 51 individuals facing federal charges in connection with the unrest. As of Tuesday morning, none is alleged to have links to the antifa movement.

Of the cases brought so far, 20 involve allegations related to arson; 16 involve the illegal possession of a firearm, more often than not by a felon; another eight people face charges related to inciting a riot or civil disorder.

The single instance in which an extremist group is mentioned in court documents is a case against three Nevada men. Federal prosecutors allege the trio belong to the right-wing Boogaloo movement that wants to bring about a civil war. The men have been charged with plotting violence during Las Vegas protests.

In an interview Monday with Fox News, Barr said the lack of cases against alleged antifa activists so far does not mean they haven't been involved in the violence.

"We have some investigations underway, very focused investigations on certain individuals that relate to antifa," Barr told Fox News host Bret Baier. "But in the initial phase of identifying people and arresting them, they were arrested for crimes that don't require us to identify a particular group or don't necessitate that."

Former federal prosecutors said if the government had indications that an individual had ties to or documented interest in a particular extremist movement, they would likely include it in charging documents to cite it during a bail hearing.

That does not rule out the possibility, of course, that investigators could discover such links in the course of their investigation.

In his Fox interview, Barr repeated his assertion that an array of extremist groups has been instigating the violence, although he did — as he has repeatedly since the unrest over Floyd's death began — single out antifa as the primary culprit.

The attorney general isn't the only one.

President Trump, too, has pointed the finger at antifa. He went so far as to threaten to designate it a terrorist organization — despite lacking the legal authority to do so.

On top of that, experts said antifa isn't even a group; it's more of a diffuse movement of leftists who share a similar ideology in opposition to fascism.

Barr described antifa as a "very loosely organized group" with a "sort of unique or unusual system of communication and organization." On the question of hierarchy, he said that "there are people who could be characterized as leaders in any given situation."

FBI Director Christopher Wray, in sworn testimony before congressional lawmakers, has said the bureau considers antifa "more of an ideology than an organization." He has repeatedly said the FBI doesn't investigate ideology; it investigates violence.

On that note, Wray told lawmakers in 2017 that the FBI was investigating "anarchist-extremist" elements where individuals appear motivated to commit acts of violence "on kind of an antifa ideology."

Barr also told Fox News that there "appear to be sources of funding" for antifa, and that the Justice Department is looking into it.

"There is clearly a high degree or organization involved in some of these events and coordinated tactics that we're seeing, and we're looking into that as well," he said. "Some of it relates to antifa; some of it relates to groups that act very much like antifa. As I said, there's a witches brew of extremist groups that are trying to exploit this situation on all sides."

The cases the Justice Department has charged so far are spread across 18 states, including Illinois, Wisconsin, Utah, Tennessee, New York, Nevada and Ohio.

Charges related to arson are the most common at this point. In many instances, the defendants are alleged to have been involved in fires that either damaged or destroyed government property such as a police car or government building.

In addition to eight people who have been charged in allegedly inciting riots or civil disorder, another four face charges related to looting — three are accused of robbing a CVS drugstore during rioting in Louisville, Ky.