Accessibility links
This Is How I Feel: A Playlist By Young Black Listeners Music has always been a vital part of protest and social justice. We asked our young Black listeners: Is there one song that's helping you address your feelings right now?

We asked: Is there one song helping you address your feelings right now? 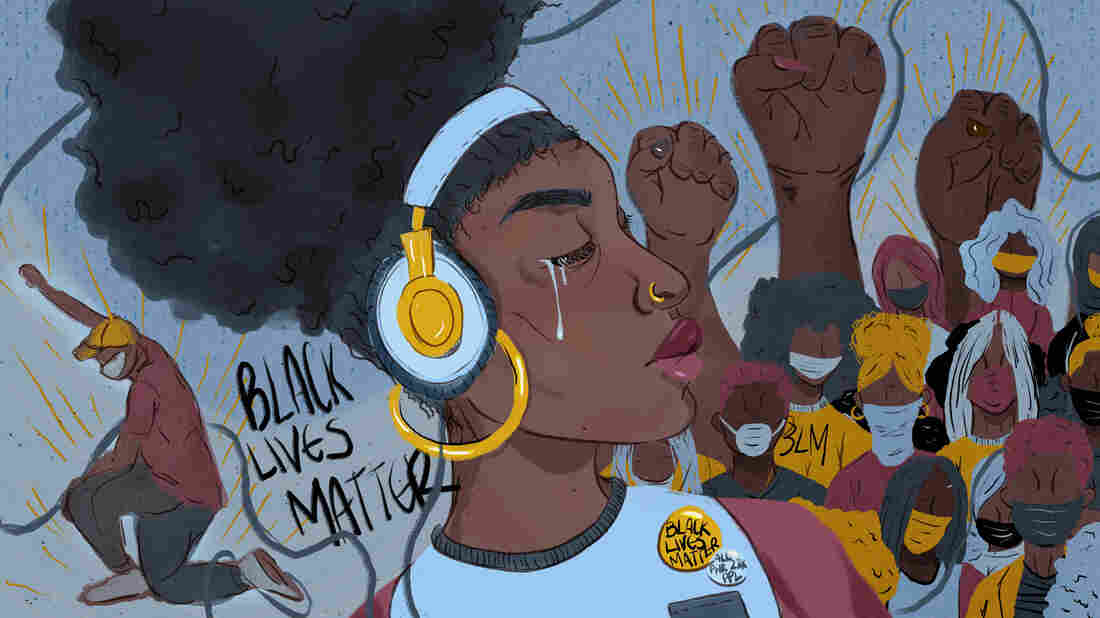 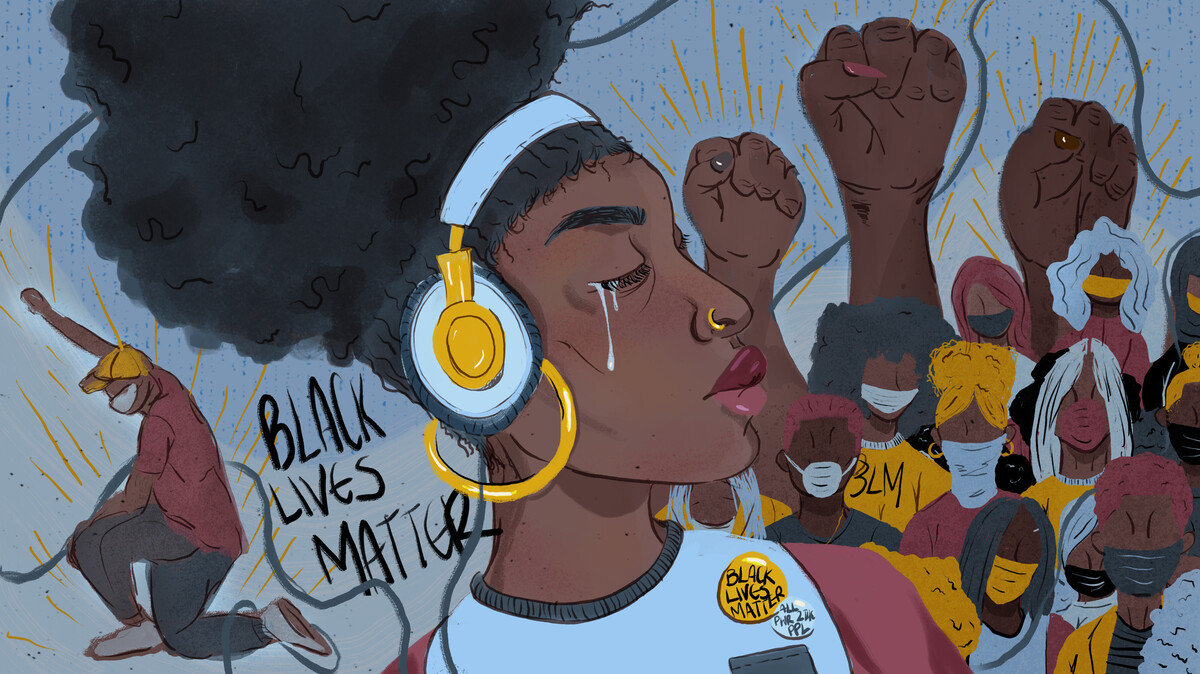 Music speaks truth to anger and frustration, but also provides a sense of hope and beauty.

Days after George Floyd was killed by police, my 25-year-old son woke up on the verge of tears. "It is difficult to find the right words to express the degree of anger, helplessness and pain I feel towards the constant state-sanctioned terrorism toward black people in America," he wrote. In response, he curated a mix — "Fighting the Anger" — to help him work through his feelings and shared it for anyone who needed the energy.

After I listened, my spirit was nurtured, but I felt helpless and sad that I could not take away his pain. Mad that I cannot protect him from the potential dangers he and all people of color face on the street every day. Frustrated with systemic racism, implicit and unconscious racial biases so prevalent in our society — they are the norm. Tired of unending police brutality and unjust racial profiling, compounded by the dehumanization and hyper criminalization of African American men in particular. Exhausted by the structural white power systems designed to beat down and keep down people of color.

But my son's mix reminded me that popular music is a powerful vehicle for personal expression and change, too. In "Mortal Man," Kendrick Lamar says, "In my opinion / Only hope that we kinda have left is music and vibrations / Lot a people don't understand how important it is."

Music has always been a vital part of protest and social justice. We reached out to our community of young Black listeners because they understand the importance of music, especially during difficult days. We asked: Is there one song that's helping you address your feelings right now? We collected responses from Instagram, but also through family, friends, musicians and organizations like Girls Write Nashville.

Below, you will see that music speaks truth to their anger and frustration, but also provides a sense of hope and beauty.

You can listen to this playlist via Spotify or Apple Music.

The song temptation represents the mindset of a lot of Black people as they struggle with the burden of fighting for their equality while also living their own life. For me, personally, it highlights the desire, and subsequent temptation, to stop or withdraw from the cause due to its strain on my mental health. However, it also motivates me to keep the fight going and asking the Lord for strength as I aid in the fight for equality. — Ian Gray, 22, student living in Jersey City, N.J.

As a Black person who identifies as queer, this song hits home for me as Janelle sings and raps about unapologetically loving her blackness and queerness. When I'm frustrated and angry, this song's message of self love encourages me to just dance and be proud of my blackness and everything else that makes me who I am. — Vondrae McCoy, 25, digital marketing manager living in New York City

"Change" astonishingly captures both the beauty and the pain of the Black experience; it depicts how the pain begets the beauty and makes our community stronger. It's about how we can change our community from the inside with the hopes of creating a better future for our children. — Alora Young, 17, student/poet living in Nashville, Tenn.

Donald Byrd's version of "Cristo Rendentor" reminds me of the fact that, against all odds, so many Black people have managed to take an immense amount of pain and turn it into something beautiful. I hope that on the other side of my grief there is a beauty that is asking to be cared for. — Darien Carr, 25, student living in Somerville, Mass.

I think the sampling of Donny Hathway is incredible and the trumpets in the background make the song a very grand, optimistic song. All the while, Jay is dropping bars about the preservation of family and the accumulation of generational wealth; his words resonate with Black folks of all ages and political ideologies. It's an incredible reminder to me that, despite the fact that our state may perpetrate violence against us, it can never taint the excellence that we know ourselves to be. — Josh Nnaji, 21, recent college grad living in Charlotte, N.C.

The nearness to death and loss I've recently felt is, to me, a new horror. But those worst of possibilities, and the pain they inflict, cannot be avoided. This song is a reminder that we cannot hope to change the cold realities; only to build a warm home within them. — Jake Blount, 24, musician living in Providence, R.I.

I love this song and I love her as a person. Her production style is aggressive, but has this meditative quality about it that makes me feel heard and seen; therefore, at peace. Moor Mother has been very important to me outside of music as well through her book of poetry Fetish Bones; a great and necessary read. — Orion Sun, 24, musician living in Philadelphia, Penn.

As an artist, Mick Jenkins has always felt like somebody whose music I connect to as a Black person trying to find joy and meaning in the midst of chaos. His music investigates what joy and love mean in the midst of terror and sadness — that's something I think people in times like this are having the most trouble figuring out. In "Carefree," he explains why the concept of carefree feels impossible to reach when dealing with the world around us, but that doesn't mean we can't find joy and connections with people. — Nae Edwards, 20, student living in Winston-Salem, N.C.

Marvin Gaye, "Save the Children" & "God is Love"

Although two songs, one bleeds into the other continuing Marvin's call to action: to love. These are songs I find solace and hope in. The timelessness of this album reminds me that I am the next generation to carry the torch. — Briana Miller, 23, student living in the Rio Grande Valley region of Texas.

One song in particular that's been on repeat for me during this time is Solange's "Weary" from her album A Seat at the Table. For me, this song embodies the emotional, physical and spiritual exhaustion that I (and many others) feel. Whether it be through the jazz ensemble or explicitly through her lyrics, Solange articulates the conflict of belonging, power and identity within a society — all things that have been replaying in my own head as I begin to process the horrible events that are currently taking place, and have been, to Black people for hundreds of years. — Makeda Daniel, 22, foundation advisor living in Boston, Mass.

There are thousands of songs by black artists that I could pick to describe how I am feeling. I am feeling devastated, heartbroken and afraid. Trying to convince a country to care about you and millions of others that look like you is emotionally draining.

The song that describes that, for me, is "Y U DON'T LOVE ME? (MISS AMERIKKKA)" by Joey Bada$$. The song's metaphors lead us to believe he is in an abusive relationship, where his partner misjudges him, mistreats him and brings him down constantly. He is left to ask, "Y U DON'T LOVE ME?" That is how thousands of black and brown people in America are feeling today. We are, in a way, stuck in an abusive relationship with a country that is supposed to love us the way we love it. This country is supposed to care, support and protect us — the way one lover would with their own lover. And we are constantly misjudged, mistreated and brought down. I feel let down. I feel trapped. —Jorden Durkee, 21, marketing rep living in Kansas City, Miss.

I picked this song because it talks about all the trials we as Black people go through. But in the end, we are powerful and "we gon' be alright." — Chris Carpenter, 33, special education teacher living in Utah

The song's lyrics are made up entirely of haiku that comment on the struggle as a Black man in America to move up in class in a capitalistic society that does not accept him. In my own experience as a Black man in the engineering world, this song means so much to me because no matter my credentials or how much money I end up making in my life, I could easily be in one of the news headlines tomorrow. The song is a poignant reminder of why people on all levels must fight until justice is achieved. — Yannick Alexis, 23, tutor/poet living in Silver Spring, MD.

It's been hard to feel grounded. I listen to this song on repeat. Sing it at the top of my lungs and try to find solace in God's other gifts. I rock my fro. Cook good food. Trust my heart. Ask for what we deserve. And then I feel peace. — Kristin Renee Young, 34, soprano vocalist living in New York City

Noname, "Don't Forget About Me"

Noname addresses the vulnerability and humanity in Black women that the world doesn't see. Noname prays that people won't forget about her and that her soul is eternal — it's a reminder that remembrance for Black women often doesn't happen. This song reminds me of Breonna Taylor and the other women in my life. I hope people don't forget their stories if something ever happens; their stories deserve to be heard. — Kai Jordan, 22, student/teacher living in Ossining, N.Y.

In the song, he names victims of police brutality and says "hero" after each one. It's sobering and depressing to hear the sheer amount of names and remember when I heard each one of them in the news. It also reminds me they didn't die in vain — though unnecessary and tragic, their deaths are what remind me and countless others to keep fighting for change. It's very powerful. — Elizabeth Dogbe, 20, student living in Raleigh, N.C.

This song was originally written about LaQuan McDonald in Chicago, but the frustrations present in the song resonate on a much broader scale. Vic does an amazing job expressing the anger many people feel when witnessing these horrific acts on Black people at the hands of police. There's a particularly powerful moment at the end, where a deposition is played describing the video evidence in the McDonald case, which brings a very urgent sense of reality to the song as well. — Cameron Payton, 22, software engineer living in San Francisco, CA.

This song encapsulates all my frustrations, hope and fears. It also depicts the weight I feel as an involuntary representative of Black people in predominantly white spaces and how hard they are to navigate. Most importantly, it reinforces my pride in our community and how we continue to make our voices heard. — Betty Tasong, 21, student living in Montreal, Canada.

This song has been on heavy rotation for me these last few weeks. I think it's because listening to it paints a picture of what the future could look like. One where everyone has the liberty to live, dream, and hope. I feel like that's the future we're marching and protesting for right now. I feel like that's the future George Floyd, Breonna Taylor and Ahmaud Arbery deserved, but didn't get. — Edem Fagbolagun, 24, student living in Chicago, IL.