Accessibility links
Joe Biden Has Come A Long Way On Criminal Justice Reform. Progressives Want More The former vice president is calling for broad reforms to policing and criminal justice in the wake of George Floyd's killing. Progressives are cautiously optimistic, but want to see more. 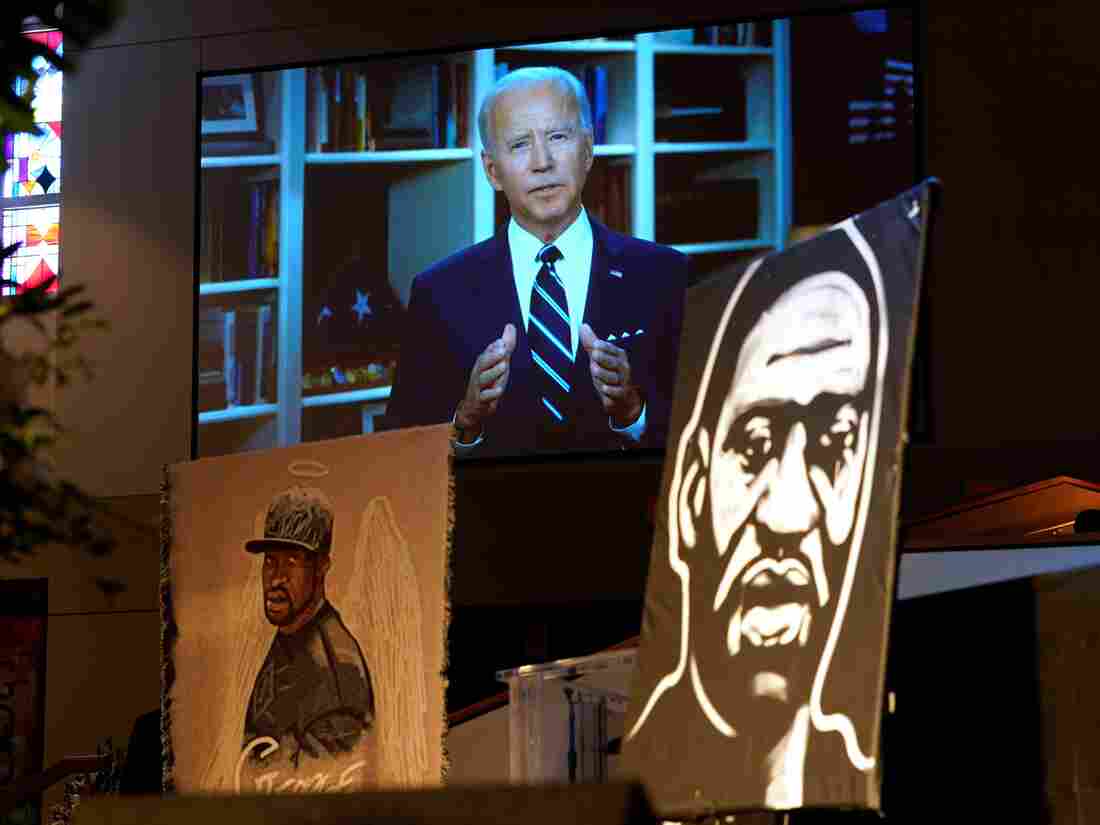 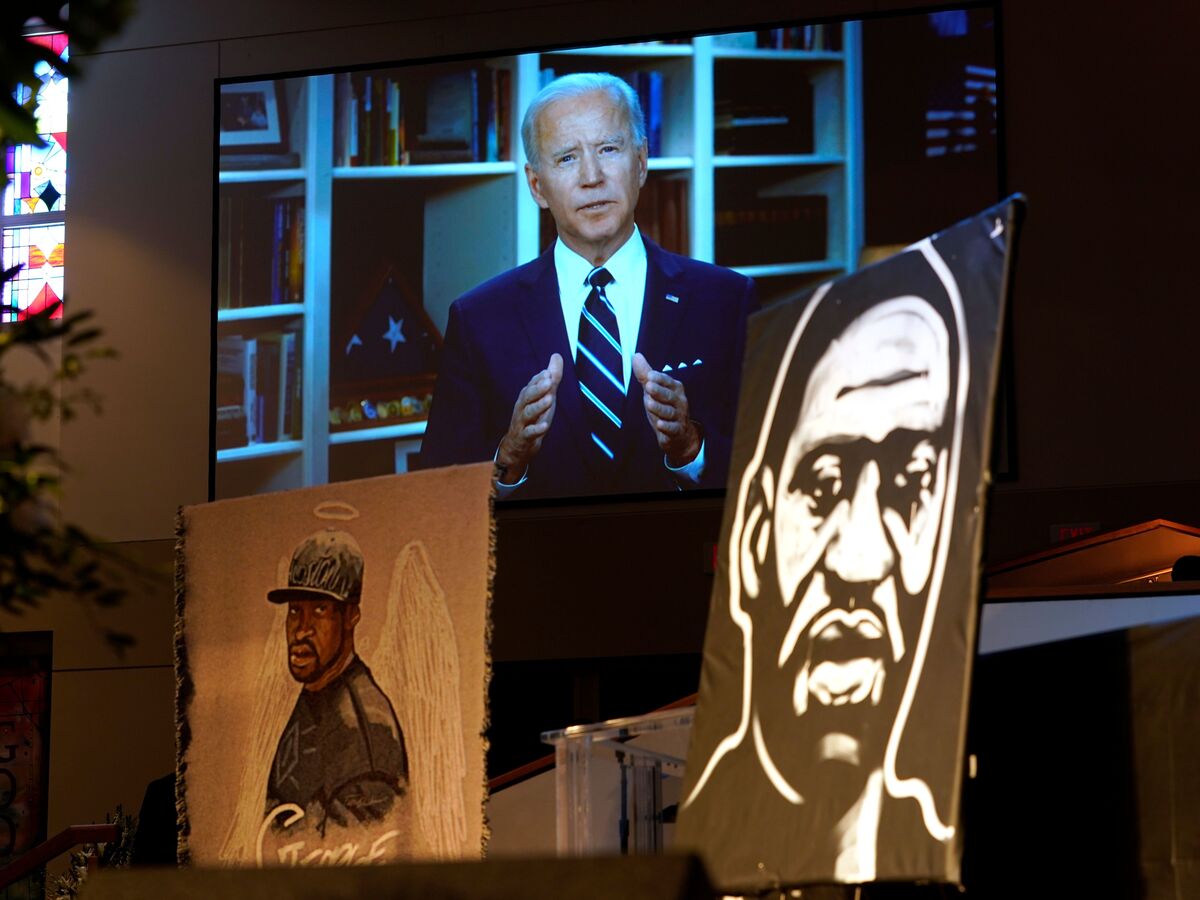 Democratic presumptive presidential nominee Joe Biden speaks via video at a funeral service for George Floyd in Houston on Monday.

Former Vice President Joe Biden has mostly responded to the aftermath of George Floyd's death by contrasting his governing and leadership style with President Trump's. But the presumptive Democratic presidential nominee has also laced his speeches, interviews and campaign statements with policy specifics.

Biden has called for a federal ban on police chokeholds, a new federal police oversight commission, new national standards for when and how police use force, more mandatory data collection from local law enforcement, and more power for the Department of Justice to investigate local police departments, among other changes.

"Let us vow to make this, at last, an era of action to reverse systemic racism with long overdue and concrete changes," Biden said in a speech last week.

And while Biden has rejected progressive demands for something that Trump is eager to tie his fall opponent to — "defunding" police departments — Biden has said that federal funding for law enforcement should be "based on whether or not they meet certain basic standards of decency and honorableness."

"I've long been a firm believer in the power of community policing — getting cops out of their cruisers and building relationships with the people and the communities they are there to serve and protect," Biden wrote in a USA Today op-ed Wednesday. "That's why I'm proposing an additional $300 million to reinvigorate community policing in our country. Every single police department should have the money they need to institute real reforms like adopting a national use of force standard, buying body cameras, and recruiting more diverse police officers."

Two members of a task force charged with pulling Biden's campaign platform to the left are encouraged by Biden's initial statements and demands but remain hopeful the onetime author of tough-on-crime bills will embrace even broader policing and criminal justice reforms.

"I'm encouraged that he's getting specific and trying to meet the moment," said Chiraag Bains, who worked in the Department of Justice's Civil Rights Division during the Obama administration. Vermont Sen. Bernie Sanders tapped Bains to co-chair the criminal justice reform committee the Sanders and Biden campaigns set up at the end of their primary contest as part of a broader effort to try to reach more policy consensus between the progressive and moderate wings of the Democratic Party.

"It's not enough to speak to people's pain and utter the right words," said Bains, who emphasized he was speaking for himself, not the task force.

Bains said Biden's statements and speeches have been the right start and have been well-received — especially when contrasted to the president. "But we need a specific agenda and it needs to be bold," he said. "I do see that the vice president is moving that direction. I just think we need to do more."

Bains wants Biden to expand on already-announced proposals on ending mandatory-minimum prison sentences and ramping up the use of clemency. He's also pushing for the restoration of federal parole and the legalization of marijuana, among other policies.

Progressives see this moment of national protests and calls to action — a moment where even a former Republican presidential nominee is marching and declaring that "black lives matter" — as a once-in-a-generation chance for substantial reforms.

Stacey Walker, a fellow Sanders appointee to the criminal justice task force and chairman of Iowa's Linn County Board of Supervisors, called the worldwide protests against police violence and racism "a global liberation movement" that could open the door for massive policy changes.

"I think the vice president totally understands that we are at a moral moment in history," Walker said. "The policies that he is supporting certainly is a step in the right direction, and it's going to help move the dialogue along on the issues we seek to address. Now, there are a lot of advocates in the criminal justice reform space who believe that we can do more, who believe that this is a moment, unlike any other, in the fight for freedom for black Americans in this country."

The task force, divided between Sanders and Biden appointees, meets online once a week, with constant smaller phone calls and emails between members in between sessions. Along with the other committees working on climate change and other policy areas, it aims to present proposals ahead of August's Democratic National Convention.

One example of the push and pull between Biden's instincts and those of the progressives who flocked to Sanders, and would need to back Biden in order for him to win this fall: how to lessen federal marijuana penalties. Biden has called for decriminalizing marijuana. Bains is hoping Biden shifts to a call for full legalization.

"Decriminalization typically means that you don't have a criminal penalty, but you could still be issued a civil fine. And then there are other kinds of consequences that could follow from that," Bains explained. "It's still illegal conduct. If possession of marijuana is just decriminalized and that is the hook for extensive police involvement in people's lives, and if you haven't addressed the underlying systemic problems in policing and the justice system overall, then people could continue to be stopped and searched and frisked and so forth."

Still, a call for decriminalizing — if not fully legalizing — marijuana marks a notable shift for Biden, who as a senator authored and voted for several tough-on-crime measures in the 1980s and 1990s that strengthened penalties for drug-related crimes in particular. 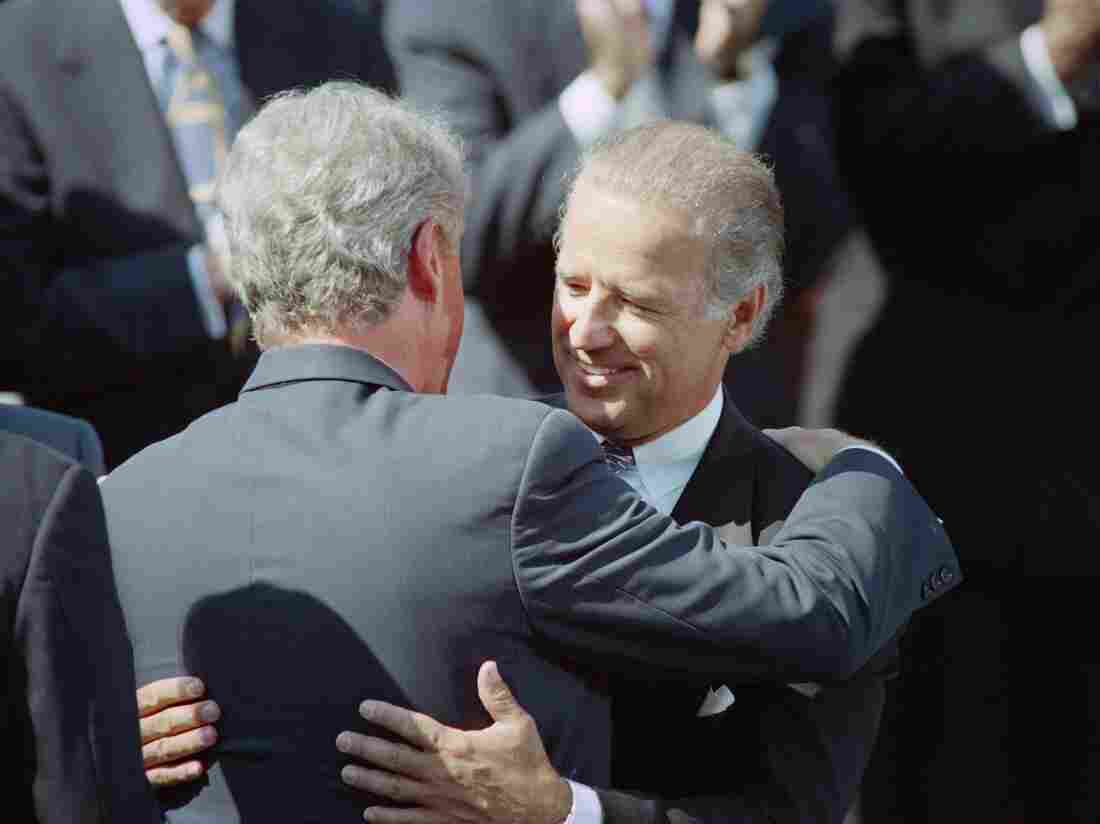 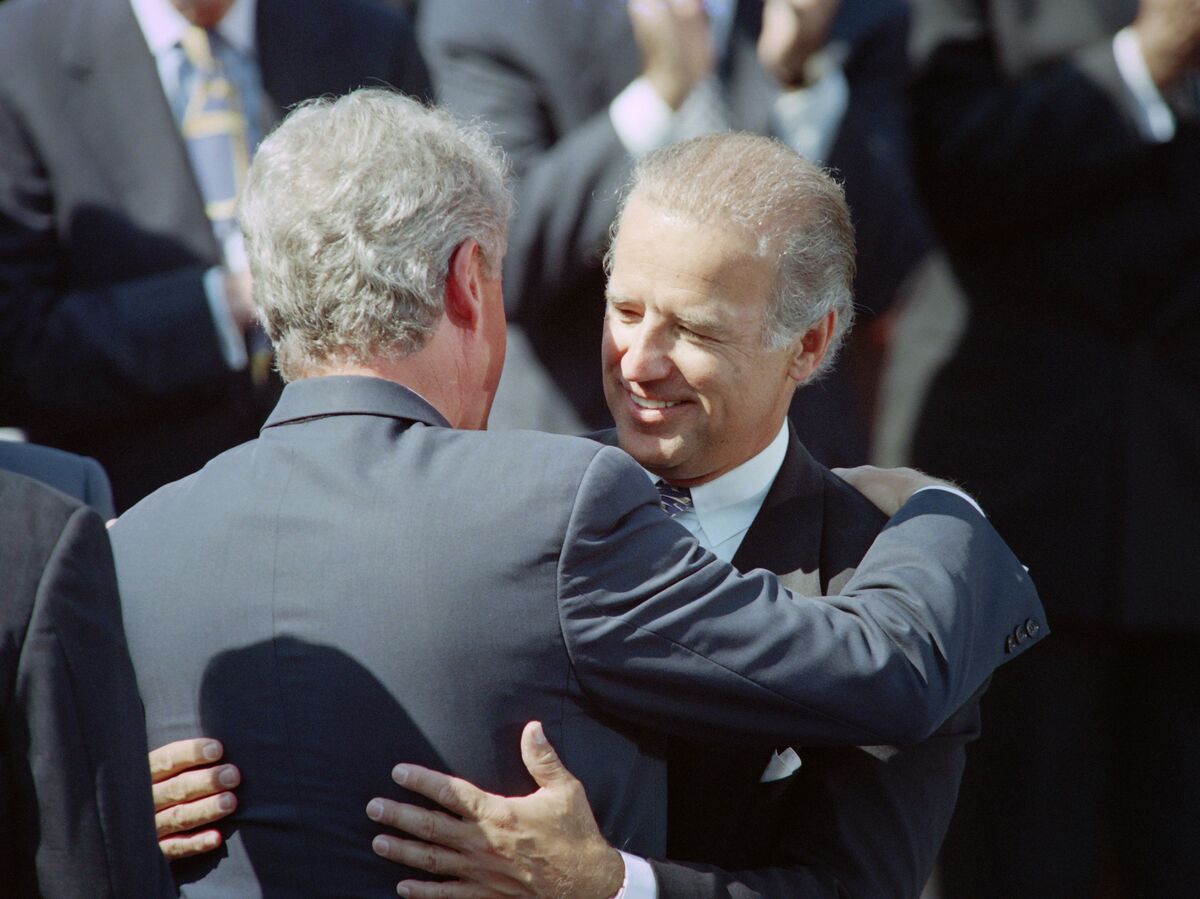 President Bill Clinton (left) hugs then-Sen. Joe Biden during a 1994 signing ceremony for the crime bill at the White House.

The most high-profile measure: the 1994 crime bill, which Biden helped write as a senator. While Biden regularly highlights the legislation's domestic violence protections and 10-year ban on assault weapon sales, the measure is more broadly seen as a key moment in a generation-long policy push that led to increasingly crowded prisons and that disproportionately targeted black Americans.

"We now know with the fullness of time that we made some terrible mistakes," Jeremy Travis, the president of the John Jay College of Criminal Justice, told NPR in 2014.

"Here's the federal government coming in and saying we'll give you money if you punish people more severely, and 28 states and the District of Columbia followed the money and enacted stricter sentencing laws for violent offenses," Travis said.

When Biden's campaign rolled out his criminal justice policy platform last year, a key provision proposed just the opposite. Biden wants to fund a $20 billion grant program aimed at lowering incarceration and crime rates in states. "In order to receive this funding, states will have to eliminate mandatory minimums for non-violent crimes, institute earned credit programs, and take other steps to reduce incarceration rates without impacting public safety," the campaign's policy paper reads.

But despite Biden's shifts, some progressives still view him with skepticism on criminal justice and have watched warily as Biden promises to take on policing abuses amid an unprecedented national focus on police violence and racism.

"This is an opportunity for him to come to account for his role in promoting the crime bill back in the '90s that led to a lot of federal support of local police departments, federal arming of police departments and a lot more expectations and money that goes toward them," progressive organizer Aimee Allison told NPR's Morning Edition.

"We understand the phrase 'defund the police' to be shorthand for a range of serious policy proposals that will end the cycle of police violence against black people and put public safety before violence," Allison said. "But if Joe Biden is not serious about ending that cycle, he's risking the success of his campaign. I mean, this is the make-or-break moment for him."

Stacey Walker supports police defunding, too, though he conceded "we may have a marketing and branding issue on our hands" when it comes to selling nonprogressives on the idea of shifting government resources away from law enforcement and toward social services, education and other areas.

Walker doesn't see Biden shifting ground on the issue. But ultimately, he doesn't think that will hurt Biden with the progressives who have embraced the push.

"We all understand that Donald Trump poses an existential risk to our democracy, to the American project and to everything Democrats hold dear," Walker said. "So while you know, we're not going to get to a point where everyone is happy, although that is the goal, I think Democrats are going to be united."