Accessibility links
The Grammys Changed Some Categories. Will They Make Any Difference? The Recording Academy has announced changes for the names and definitions of four categories traditionally associated with artists of color. What does that mean for systemic changes at the Grammys? 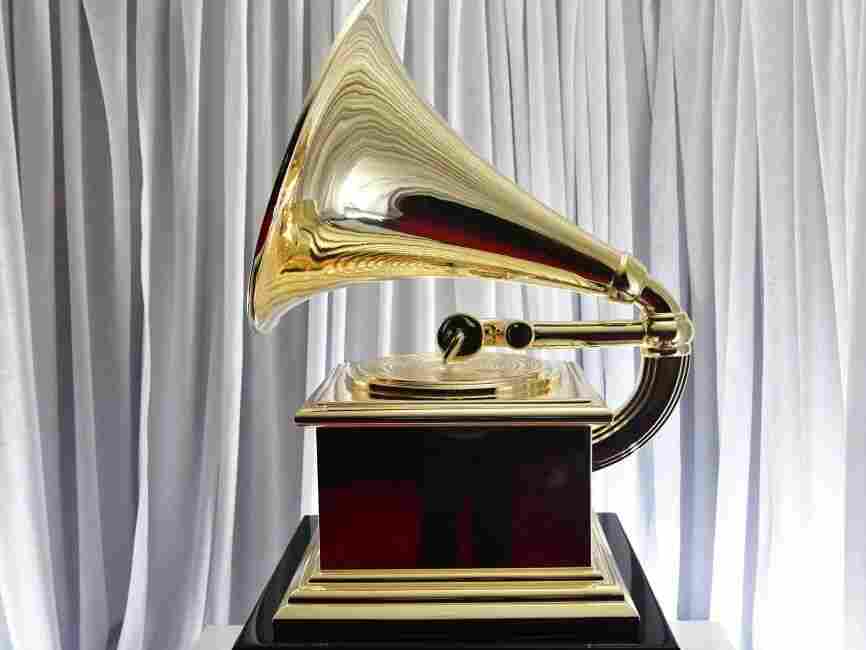 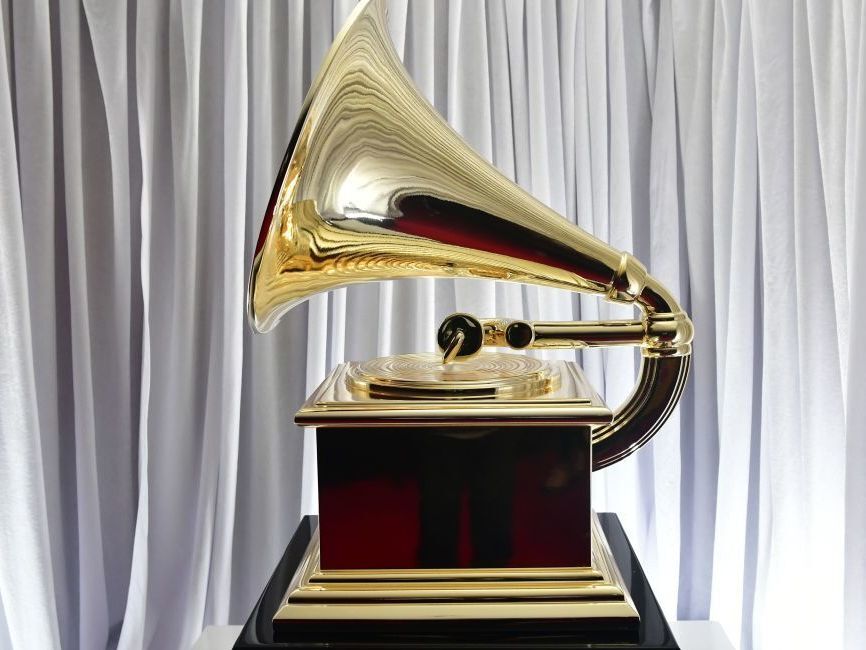 An oversized Grammy award on display backstage during the 62nd annual Grammy ceremony in January.

On Wednesday morning, the Recording Academy, which gives out the Grammy Awards, announced a few changes to the prizes — and to the way it structures its voting process. On social media, critics and fans immediately took up debating the most obvious shifts.

Four categories have been renamed and redefined — and all of them traditionally include black and Latinx artists. They include Best Progressive R&B Album, a category formerly known as Best Urban Contemporary Album, and Best Melodic Rap Performance (which used to be Best Rap/Sung Performance). Two Latin music categories have also been reshaped: Latin Pop Album, which is now Best Latin Pop Or Urban Album, and the former Latin Rock, Urban Or Alternative Album, which is now Best Latin Rock Or Alternative Album.

On the surface, these seem like clumsy name changes — the introduction of Best Melodic Rap Performance as a name has already elicited sneers online. But their introduction points to larger, systemic issues for an organization that has long struggled to acknowledge and celebrate music made by artists of color.

The Academy defines "Best Progressive R&B Album" as "intended to highlight albums that include the more progressive elements of R&B and may include samples and elements of hip-hop, rap, dance, and electronic music." The point, ostensibly, is to point to art made outside of the mainstream. But it sounds like something of a return to a category called Best Urban/Alternative Performance, which was introduced in 2003 and hastily retired in 2011. (Among the winners: India.Arie, OutKast and Gnarls Barkley.)

Meanwhile, the shifting of the definitions in the two Latin music categories are an attempt to embrace how Latin music has shifted. The switch from Latin Pop Album to Best Latin Pop or Urban Album, and the introduction of the word "urban" into its former Latin rock and alternative category, seems to be a lagged attempt to embrace the popularity of styles like reggaeton and Latin trap.

But the Academy's announcement came on the same day that Remezcla announced that it will no longer use terms like urbano and música urbana, saying that they are "inextricably linked to a history of exclusion and segregation within the music industry," and that describing music as "urban" and "urban contemporary" has "historically been used as a way to separate Black artists" from the (white) artistic mainstream. Has the Recording Academy caught up with cultural conversations during the enormous social reckoning of 2020, or has it shown that it is still far behind?

Furthermore, it's impossible to see the changes announced today without the context of the Academy's turmoil over the last couple of years. At the last edition of the awards ceremony, held this past January at the Staples Center in Los Angeles, the frustration — and anger — of many artists at the Grammys was clear. As Diddy said from the stage at a pre-awards gala: "Truth be told, hip-hop has never been respected by the Grammys. Black music has never been respected by the Grammys."

The 2020 Grammys: How Much Weight Can One Awards Show Carry?

And what most people sitting at the Staples Center six months ago knew — but what many fans watching at home probably didn't — was that the Recording Academy was roiling. Not even two weeks before this year's ceremony, its recently installed president and CEO, Deborah Dugan, had been ousted from her job. Dugan, the Grammys' first female chief, had come to the position five months earlier with an explicit bid for change and more diversity at the Grammys, an organization long dogged by complaints that it is too male, too white, too old and too insular. By the time the Grammy Awards were telecast, however, she was gone — and she soon filed a discrimination complaint with the Equal Employment Opportunity Commission that included allegations of sexual misconduct and vote rigging, which the Academy and its former leadership have denied. (For its part, the Recording Academy said that it had placed Dugan on leave pending an investigation into an allegation of bullying that came from a female assistant, which Dugan denies.)

The Cloud Over The Grammys: Allegations Of Sexual Misconduct, Vote Rigging

In Wednesday's announcement from the Recording Academy, there was no word of why the changes to the Grammy categories were made now, aside from a bland statement from the organization's interim president and CEO, producer and songwriter Harvey Mason Jr. ("We're constantly evaluating our Awards process and evolving it to ensure the Grammy Awards are inclusive and reflect the current state of the music industry.")

A spokesperson for the Recording Academy told NPR on Wednesday afternoon that these category changes have been in process for some time, and were voted on in May. In an interview with Variety conducted Tuesday afternoon, before the Academy's announcement, Mason spoke of his organization's efforts around racial and social justice issues, though he did not explicitly link them to the awards reorganization.

The other changes announced Wednesday also deserve real conversation and examination. The Recording Academy loosened its strictures on who is eligible for the Best New Artist award, and it is asking members of its nominating committees to identify potential conflicts of interest. These are shifts that are less primed for hot takes than the category changes, but ultimately may prove to have far deeper and broader implications for the awards — and for the way that the Grammys are conducted overall.

[Over the past few years, I've covered the Grammys extensively, but I also come to this area with some insider knowledge. Up until about a decade ago, I was a Grammy voter myself, and I also served on the committee for Best Album Notes, one of the small "craft" committees that judges one of a handful of Grammy categories outside the Academy's nomination review process, and not voted on by the general membership. In addition, my husband, Joshua Sherman, was also a Grammy voter who served on committees; he was also part of teams that created several Grammy-winning recordings, and he produced several other Grammy-nominated albums.]

Over the years, the Grammys have axed certain awards entirely. (Farewell, Best Polka Album, which danced off into the sunset only in 2009.) And from time to time, the Recording Academy has also introduced or redefined categories, as musical tastes have shifted — and as the industry and musicians have urged. The last major overhaul came in 2011, when the Grammys trimmed its awards categories from 109 down to 78.

The expansion of eligibility in the Best New Artist category means that musicians will no longer have a cap on the number of releases that they have made as emerging talents. This shift in how a "new" artist is defined — for an award considered one of the four biggest Grammy prizes — is clearly part of a recognition of how the industry has shifted in recent years, far away from the anointing of a new talent (often by a major label with enormous industry sway) and towards a more organic career rise through mix tapes and platforms like SoundCloud and TikTok, as well as a bid towards greater diversity in the category.

The changes addressing conflicts of interest among voters are likely to be pondered and criticized by Grammy members, particularly for the vagueness and clumsiness with which the new parameters have been written. According to the Academy, members who serve on its so-called nomination review committees, which "determine the final nominees" in most awards categories, must disclose any connections they have to potentially nominated artists and projects.

Some of the disclosures that are only now being requested are shocking in that no one has ever officially asked before. (Two glaring ones: Do you have any "immediate family ties" to a potential nominee? And will you, as a voter, have any "direct or indirect financial ties" to a project or artist under consideration?)

But the way that these conflicts of interest are being framed is also vague and difficult to discern. Particularly among smaller categories and niche genres, the industry depends on a web of close and long-standing professional ties. (If you collaborated with a potential nominee on a project say, five years ago, would that be a conflict? The Recording Academy doesn't define a time limit on its inquiries.) Perhaps most pressingly, will these disclosures prevent block nominations and voting among the Grammy membership — a habit that has long overshadowed many categories?

And what the Recording Academy failed to acknowledge in its announcement of these charges is that these new requests for disclosure address one of Deborah Dugan's most direct accusations against the Grammys, and what she perceived as systemic failures. She called the voting system "rigged" and "corrupt," particularly in the nomination process. The Academy denied those allegations, but clearly, she and her advocates hit some kind of nerve.