Accessibility links
Sea Otters Can Boost Tourism, But May Interfere With Native Food Supplies The return of sea otters to historic habitats can restore ecosystems and bring economic benefits, but hungry otters can also threaten the food security of remote indigenous communities. 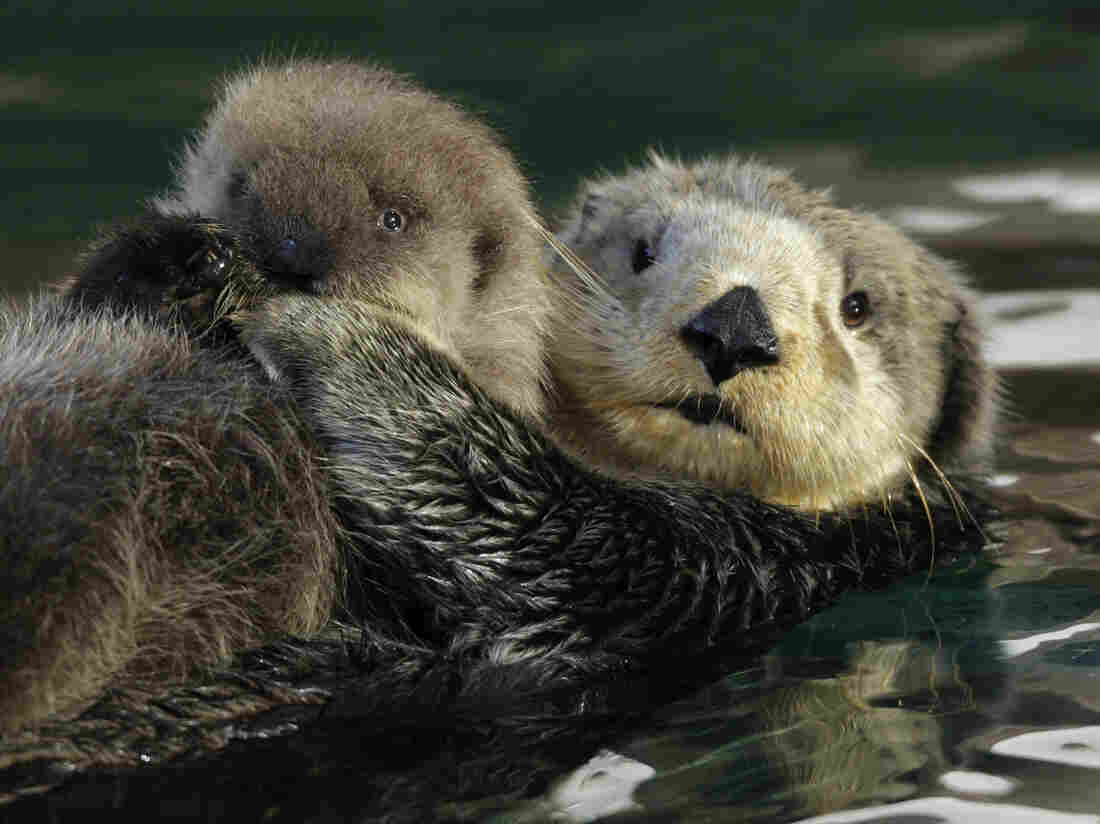 Sea otters are tourist magnets--and voracious eaters. Not everyone is happy about their comeback off the coast of British Columbia. Ted S. Warren/AP hide caption 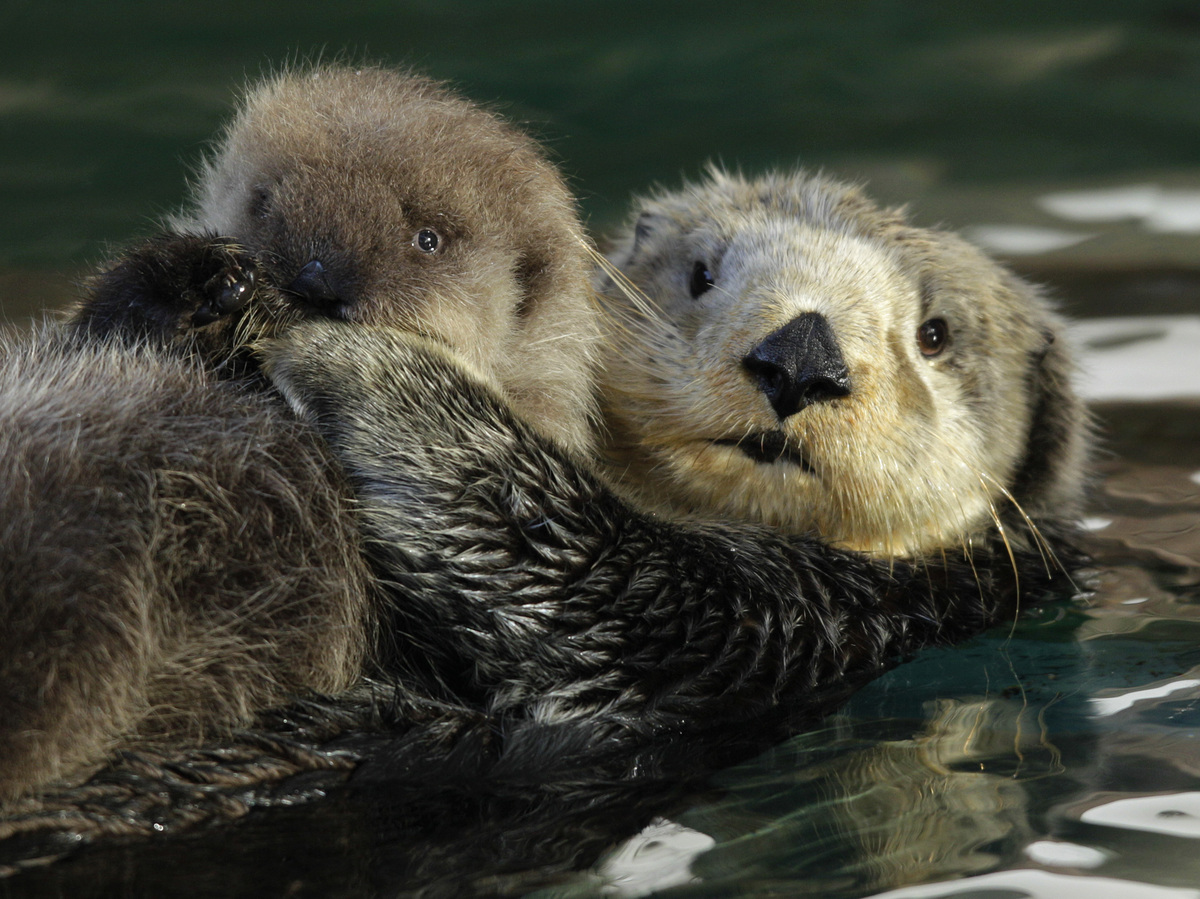 Sea otters are tourist magnets--and voracious eaters. Not everyone is happy about their comeback off the coast of British Columbia.

Sea otter populations are rebounding in the eastern North Pacific. There, they devour huge quantities of shellfish and other marine critters that people like to eat, too. But any commercial losses to fisheries are far outweighed by economic benefits associated with the otters, according to a new study.

The analysis, published in the journal Science, suggests that when sea otters return to their historic habitats, they fundamentally alter the ecosystem and produce financial gains that are potentially more than seven times greater than the costs.

The trouble is, "these costs and benefits are not going to be distributed equally across fisheries or communities," says Edward Gregr, an ecologist with the Institute for Resources, Environment, and Sustainability at the University of British Columbia in Canada.

For example, he and his colleagues found that ecotourism related to sea otters could be a significant money maker. But that may be meaningless to remote communities that are far more concerned about harvesting the subsistence seafood that they need to survive.

"It's like whale watching, right? Who has the money to put these big boats into the water and advertise? Usually, it's not the locals," says Barbara Wilson, who lives on Haida Gwaii, an archipelago off the northern Pacific coast of Canada.

She was part of a research team that recently surveyed indigenous people's feelings about coexisting with sea otters. Because the otters "eat the same foods as we do," says Wilson, "the impact for us is fairly critical."

Sea otters are voracious eaters. On the surface of the water, they tend to lounge about and adorably hug their little babies. Beneath the surface, sea otters will dive down over 150 feet to reach prey like abalone, sea urchins, crabs, and clams, which they can crack open using rocks. Unlike other marine mammals, sea otters have no blubber, which means they need to eat a lot to fuel a metabolic furnace that lets them survive in cold waters.

"You can imagine a 60-pound animal that is eating 15 pounds of food a day," says Jane Watson, a researcher with Vancouver Island University, who has studied sea otters for decades.

Researchers believe that sea otters were common along the Pacific coast before Europeans arrived. Still, the people who lived there were able to farm clams and gather shellfish. "It was a very occupied coast, and I suspect that otters simply did not dare come into areas where people were," says Watson.

But the otters basically disappeared in the 18th and 19th centuries, after being hunted almost to extinction for the fur trade. "All of the sudden, all of the prey that otters eat no longer had their principal predator eating them anymore," says Watson. Shellfish and sea urchin populations took off.

Sea otters were re-introduced into parts of the Pacific coast in the late 1960's and 1970's, and since then the otters have been flourishing. As their numbers rise and they continue to expand into new areas, commercial seafood companies and subsistence fishers have come to resent the otters' ravenous appetites.

"It's been simmering and I think it's slowly coming to a head," says Gregr, who has heard anecdotal reports of illegal otter killings in British Columbia. "Sea otters are cute and cuddly, and the public tends to be on the conservation side. So it's difficult to persuade some people that we should maybe be managing these species a little bit more actively to help communities protect their food supply."

In Alaska, native communities are legally allowed to hunt sea otters. Sea otters in Canada, in contrast, are prohibited from being disturbed unless a special permit is obtained. Only a few are killed each year to obtain fur for ceremonial purposes. "We can't hunt them. We can't manage them the way our ancestors did," says Wilson.

All of that is the context for this new study, which attempts to understand what impact sea otters can have on coastal environments in great detail.

Researchers were able to take advantage of a natural experiment. They compared an area on the west coast of Vancouver Island where sea otters were re-introduced decades ago to an adjacent coastal area that sea otters have not yet occupied.

Years of careful fieldwork let them estimate a loss to fisheries of about 7.3 million Canadian dollars, because of otters gobbling up valuable seafood resources like geoduck clams and Dungeness crabs.

"Once the kelp recovers, it provides habitat for all sorts of different fish species. It helps the reproduction of many species that have larval stages," says Gregr. "And, of course, it provides an awful lot of food to the bottom part of the food web. So there's all these knock-on effects of a recovered ecosystem with otters in it that we wanted to value, so that there was something tangible to compare to the losses."

The greatest potential financial benefits from otters, however, came from tourism. Based on surveys with tourists, the research team calculated that the otters could bring in some 42 million Canadian dollars in ecotourism.

"The sea otter is a very charismatic species. Tourists love being able to see them in the wild and, importantly, are willing to pay for this experience," says Russell Markel, a marine ecologist and owner and operator of Outer Shores Expeditions.

He cautions that sea otter tourism won't be able to offset all the negative impacts of sea otter reintroduction, "particularly in remote indigenous communities on our coast where equitable access to marine resources and food security continue to be paramount issues and challenges."

What's really important about this study, says Watson, isn't so much the results but "the method and the approach, and the fact that this method and approach could be applied to other ecosystems, equally contentious ecosystems" that involve restoring a top predator.

It provides another tool to help people understand the value of an intact ecosystem, she says.

"There's a part of me that hates reducing ecosystems to dollars and cents, but sometimes these approaches are important," says Watson. "They'll certainly make far more sense to a lot of policy makers, to a lot of politicians, to a lot of people that are driving the decisions around ecosystems and ecological services."

But some worry that this type of cost-benefit analysis will only further marginalize indigenous people from the policy-making process, and perhaps even intensify the conflicts over sea otters.

"It reduces humans and human values to dollars, and so it is really quite alien to the worldview of Nuu-chah-nulth and other indigenous peoples," says Eric Angel, program manager for Uu-a-thluk, the fisheries department of the Nuu-chah-nulth Tribal Council, which represents fourteen related tribes on the west coast of Vancouver Island. "Whose worldview gets to define how the problem is even set up in the first place?"

In his view, this type of analysis treats ecosystems as if people aren't part of them.

"If you really wanted to restore those ecosystems," says Angel, "then you'd be restoring the relationship that Nuu-chah-nulth had with sea otters as well."