Accessibility links
Review: 'You Exist Too Much,' By Zaina Arafat Zaina Arafat's powerful new novel follows a queer Palestinian American woman from adolescence to adulthood, a journey dogged by constant longings for home, for identity, for belonging. 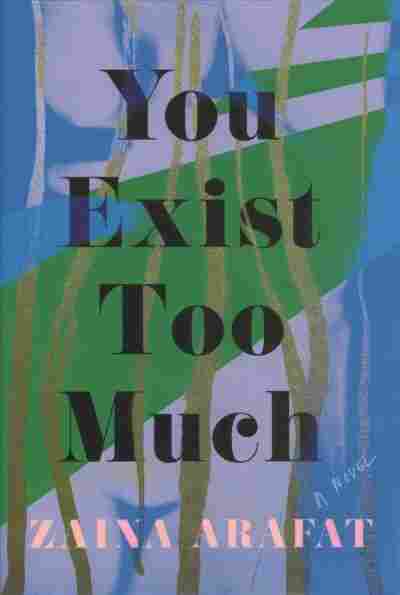 You Exist Too Much

Title
You Exist Too Much
Author
Zaina Arafat

"Anytime I heard of another Arab girl's engagement, it immediately snapped me out of my gayness."

Arab. Bisexual. Migrant. Anorexic. The list goes on and on. The main character in Zaina Arafat's You Exist Too Much is a nesting doll of otherness, and her journey from 12-year-old Palestinian American girl walking around Bethlehem to young woman traveling the world and looking for love in the arms of strangers is a perfect example of how culture and family can affect those whose lives span different realities.

More than just a novel with a plot, You Exist Too Much is a character study told in vignettes that jump between past and present, from summers spent with family in the Middle East to time New York City, Italy, Egypt, Lebanon, and a treatment center. Each place is marked by a love interest, and each period is marred by a longing for something. Sadly, both elements are constants; otherness is at the core of the story because the narrator has never felt like she belonged anywhere.

As a child, her American friends call her "the terrorist," a joke she later comes to see as a microagression. As an adult, she's constantly obsessed with women she can't be with, longing for a girlfriend but unable to come out of the closet. Throughout all of it, her overbearing, homophobic mother, mental illness, and an eating disorder keep her from happiness. You Exist Too Much is about wanting and not having.

'You Exist Too Much' is about wanting and not having.

Arafat tries to do a lot in this novel, and she pulls it off. This is a story about a woman trapped in the interstitial space between different cultures and religions, but it's also about sexual identity and the effects of fear of rejection and codependency. The main character knows what she wants, but she doesn't know why she wants it — and understands that her family will abandon her if she tells them what she wants. Her desires are always in conflict with what she's been told she should want — a good husband, babies, and a nice house. Her struggle with sexuality pushes her towards cocaine, alcohol, and random romantic encounters, but none of that stops the confusion and pain.

This is not a happy novel. There are shining moments of friendship and fun, but they are highs in a life that's an almost constant low. Everything the narrator is — what she desires, where she is, and where she comes from — forces her to live in "a liminal state between two realms, unable to attain full access to one or the other."

She is adrift, floating in frustration and unfulfilled. This constant state of discontent gives You Exist Too Much a bleak atmosphere that's reinforced by some of the narrator's thoughts: "The notion that everyone will eventually cease to exist brings me great comfort and temporary courage."

'Black Sunday' Will Destroy You — Let It

Despite its depressing tone, there is hope in this story. From time to time, a kiss can be a healing salve, and time spent with someone turns into a momentary respite from the constant pressure of the narrator's unsatisfied longings. As she moves from country to country and from one living situation to another, she discovers that there is a correlation between the way she sees things and the places she's been to. Geography and people shape her psyche, and that reveals an inner truth that is as full of hope as it is devastating: She's always been looking for home.

While the vignettes take place in many cities, the time the narrator spends at The Lodge, a treatment center where she's diagnosed with "love addiction," is the most important. The treatment she receives at The Lodge forces her to look at people and herself differently and to analyze the connection between her internal traumas and the people, spaces, and experiences she's been through. That process shines a light into the cracks of her life, and the truths hiding there change her in significant ways.

You Exist Too Much is a narrative about borders both physical and mental. It deals with the challenges of finding love when you don't love yourself, and fear losing the love of your family. More importantly, this is a novel that uses examination of the self as a vehicle to explore the impact of migration and sexuality on young people caught between cultures.

In that regard, this book is about much more than being multicultural; it offers a messy, multilayered, flawed, insecure character as proof that multi-everything should be a category, because humans are too complicated for every other classification and multicultural leaves out things like sexuality and mental illness. At once complicated and engaging, this is the kind of debut novel that announces the arrival of a powerful new author who, besides writing beautifully, has a lot to say.