Accessibility links
How 'Streets Of Rage 4' Reimagined Gaming's Most Iconic Rave The Streets of Rage video game franchise was known for its cutting edge, club-inspired soundtrack. Composer Olivier Deriviere set out to recapture that magic in Streets of Rage 4.

How 'Streets Of Rage 4' Reimagined Gaming's Most Iconic Rave

How 'Streets Of Rage 4' Reimagined Gaming's Most Iconic Rave 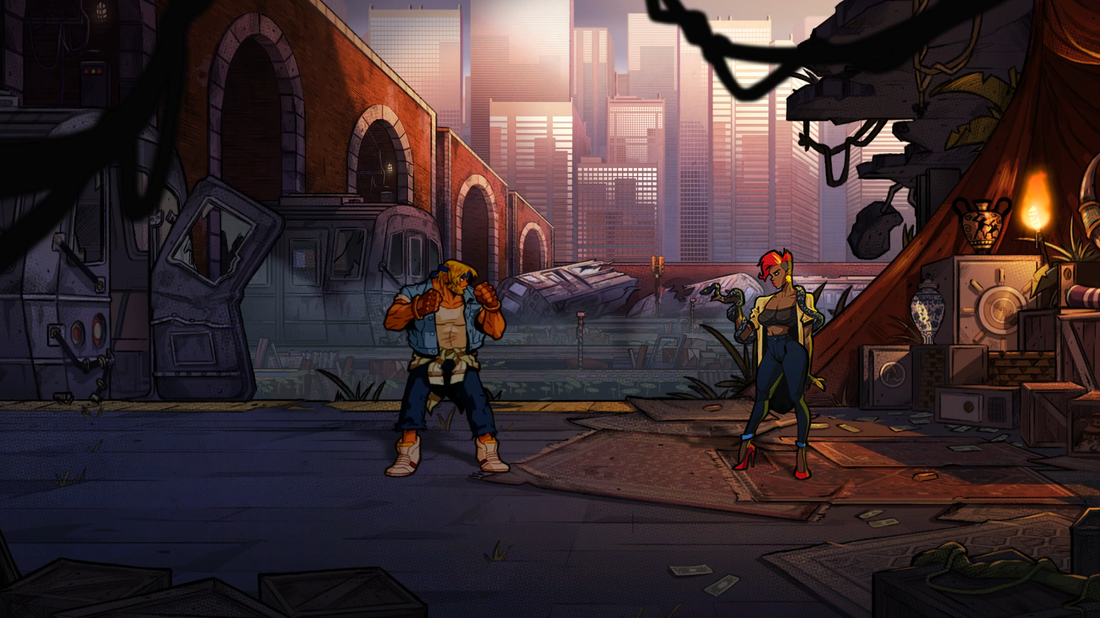 Axel Stone and friends return to clean up the streets once again in Streets of Rage 4. LizardCube hide caption Axel Stone and friends return to clean up the streets once again in Streets of Rage 4.

At the turn of the '90s, the attention of the video game industry was locked onto two major companies battling for the lion's share of a growing industry. One was Nintendo, whose ubiquitous Italian plumber was a household name.

The other was SEGA, a brand known for its spiky hedgehog, sure, but also for signaling a specific kind of '90s cool that set itself against other video games of the time. While Nintendo stuck to their family friendly "games-for-all" aesthetic, SEGA put out video games that were thematically riskier and more mature.

One of SEGA's biggest titles of that era was Streets of Rage, a beat-'em-up style game released for the Genesis console in 1991. In it, the player assumes the role of an ex-cop out to clean up the streets of a corrupt city. It was a game with an irrefutable style, a counter-cultural cool; its grimy cityscapes were populated by leather-laced street punks, it was violent and unruly. The shock of something new was everywhere in Streets of Rage, the feeling of a freshly realized aesthetic rendered with startling precision and clarity.

At the center of this revelatory difference was the music. Most games of the era were filled with delightful, airy melodies. Rather than looking to contemporaneous video games for inspiration, series composer Yuzo Koshiro wanted to make something that resembled his experience at nightclubs in Tokyo. And so Streets of Rage ended up with music that resembled the broader world — not just the world of video games. Koshiro's looping compositions were crunchy, gritty electronic tracks that sounded more like a Saturday night rave than the cute chiptune ditties of Super Mario Bros. 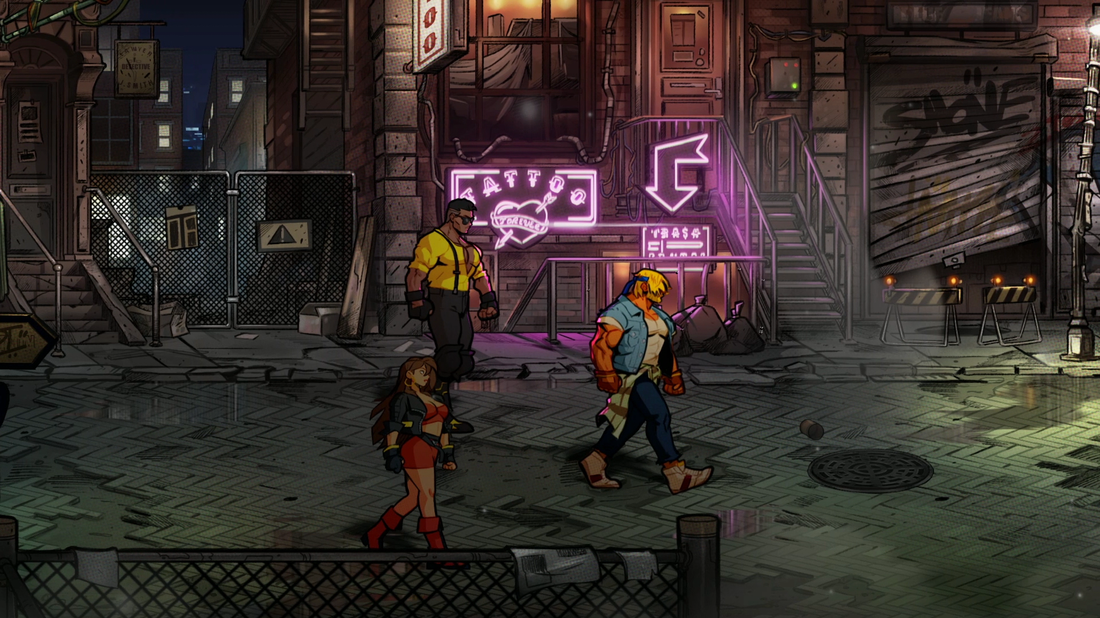 The music is central to the gameplay, maybe even moreso, in the latest Streets of Rage title. LizardCube hide caption The music is central to the gameplay, maybe even moreso, in the latest Streets of Rage title.

It's unsurprising that this musical legacy has extended beyond the confines of its original cartridge, influencing the very scene that inspired it. In the years since, the Streets of Rage franchise has influenced major musical artists like Just Blaze and Flying Lotus. The music is toured live, with DJ sets done by the original composers that sell out in both the U.S. and Japan. It is music that has entered the house and techno pantheon. But there hadn't been a new Streets of Rage game since 1994.

A live Streets of Rage concert.

Until now, that is. Reviving beloved gaming franchises is a risky business, and game fandoms are a notoriously picky bunch. But the French video game publisher Dotemu has made a surprising specialty out of doing just that: taking beloved but dormant franchises and bringing them back to life.

In 2017, Dotemu, alongside development team Lizardcube, released a remade version of The Dragon's Trap, part of SEGA's classic adventure series Wonder Boy. They set out to create a game that felt true to the originals; they had discussions with the original development team, and did their best to recreate the magic of those experiences. It was a critical success, and fans dug it too.

But Cyrille Imbert, CEO of Dotemu, was already dreaming of embarking on an even more ambitious, risky, and daring revival project. The idea was to publish a new addition to Streets of Rage.

Imbert went back to LizardCube and started thinking about what a new Streets game might look like. "I pitched the game to SEGA in Tokyo and they loved it," he says.

Things moved quickly, and before long, the team had a green light.

The result of over three years of development is this year's Streets of Rage 4. Its a game that has, against all odds, managed to gracefully revitalize yet another long slumbering franchise, one that, in its heyday, changed what many believed was possible with video game music.

That's why early on in the development of Streets of Rage 4, Imbert realized that recreating the magic of the series meant assembling a roster of composers and contributors who would do right by the series' outsized musical ambitions.

Imbert landed on French composer Olivier Deriviere, who had previously worked on big titles like Alone in the Dark, as well as indie games like Remember Me. But Deriviere says working on a game like this was different. There were a terrifying number of potential directions to take the music in: "Should we go with Koshiro-san's style? Should we go with 90's nostalgia?" he says he asked himself. "It was a lot of questions. And it was very frightening for me." 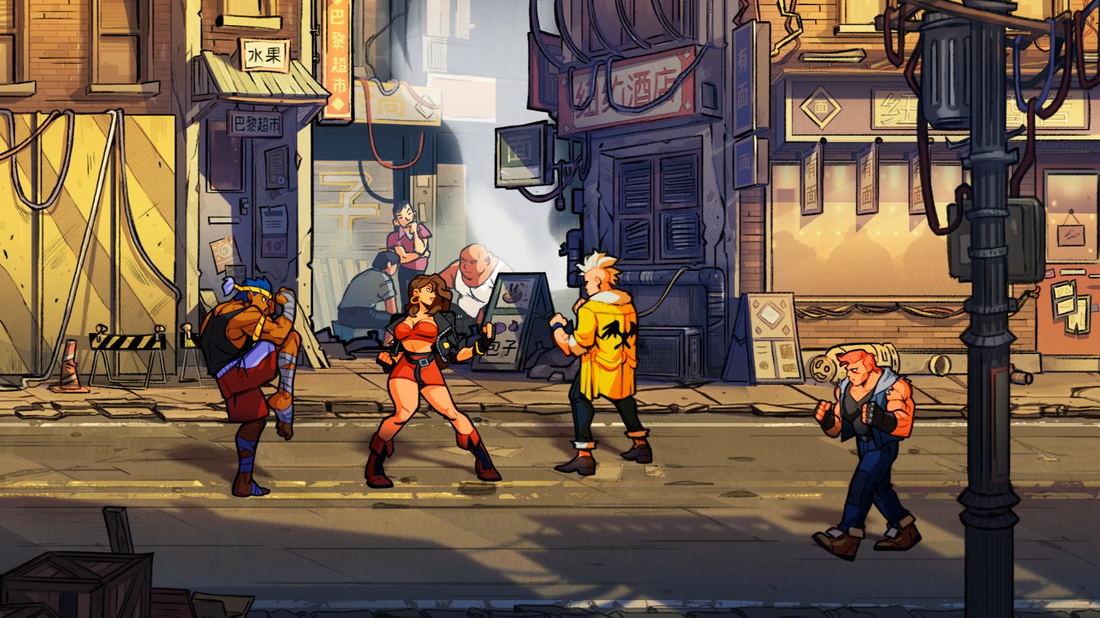 Rather than shoulder the weight himself, Imbert decided the soundtrack would be overseen by Deriviere, but feature a diverse array of original and new composers. So while Deriviere handles most of the main stage music, there are plenty of other contributors in the mix. "What we have is a lot of very big stars from the East, such as Yuzo Koshiro, and [Motohiro] Kawashima ... and Street Fighter 2 composer Yoko Shimomura," Deriviere says. But just like the original series, Streets of Rage 4 has a soundtrack that feels remarkably contemporary. There are broader genre influences this time around — flourishes of dubstep, R&B, hip-hop. "We had DJs and composers from the west, like Groundislava, and Scattle, and more underground artists."

Originally, developers requested that Deriviere create static, looping compositions for each stage, something that would repeat over and over again until the close of each level, just like the original trilogy. But that kind of looping was more a limitation of the era's hardware than a hard-and-fast design rule. "I insisted that it would be more interesting maybe to have the music revolving with the game ... to create a sort of coherent progression," Deriviere says.

"Rising Up" plays during one of the game's late climactic battles, set in an elevator.

Making your way through a stage in Streets of Rage 4 feels like a well-paced DJ set, as methodically built melodies eventually give way to moments of climactic payoff. One sequence near the end of the game has gotten a particularly strong response from fans, as the music and gameplay build to a climactic set-piece battle in an elevator. "You get this sort of very 80's synth-wave music with a big melody — everybody has been getting excited about this," Deriviere says.

New musical flourishes aside, so much of what made the original Streets of Rage games memorable were the melodies drawn up by composers Koshiro and Kawashima, who both contribute music to Streets of Rage 4. Koshiro in particular is often thought of as the godfather of Streets of Rage music, and his direct, rave-ready melodies — especially "Go Straight" from Streets of Rage 2 — are essential pieces of the Streets of Rage canon. Koshiro says those compositions were a natural byproduct of what he was listening to at the time, artists like Technotronic, Soul II Soul, Enigma and Black Box.

But replicating the sound of studio-crafted club music with '90s video game hardware was no easy feat. Koshiro first made the music on a computer called the NEC PC, using a piece of software he coded himself called Mucom88. Then, the music had to be painstakingly converted to binary code. Finally, he had to build a custom drive that made the code readable on the Genesis.

For Streets of Rage 4, Koshiro set out to replicate the feel and texture of music that was born from those limitations. One of the things he did was use actual hardware from the '90s, like old drums and samplers. "I used the Roland TR-909, MKS-80, Junio106s, the M1 from Korg, and the s950 from Akai," Koshiro says. All of this was equipment that was quite common for making house and techno music of the era.

Original composer Yuzo Koshiro also did the opening theme for the new game.

Koshiro's new compositions, made with old technology, are central to the game. As soon as you boot up Streets of Rage 4, you're greeted with melodies that sound familiar. "The one thing that we wanted to do was start with Koshiro," Deriviere says. "The main theme was written by Koshiro. When you select characters, it's Koshiro. And when you enter the first half of the first stage, it's Koshiro's music. It was very important to us to start with his spirit."

Deriviere says that because the process of making music with Koshiro was so hermetic — the two never directly worked on music together, or even had conversations about the direction the music should go — it was an exciting feeling to have his work recognized by the original godfather of Streets of Rage. "The first time we talked," Deriviere said, "was Koshiro congratulating me on Twitter." So far, fans have been in agreement with Koshiro: Not only has Streets of Rage 4 been a surprise success in terms of sales, but there's also been demand for the soundtrack itself on iTunes and elsewhere.

There's something to be said about why the music of Streets of Rage 4 continues to resonate, even decades after the original series. It's a game that, like its predecessors, takes risks in the form of design decisions. This is true not only in terms of its musical direction, but its thematic direction, too. The original Streets of Rage was a game about fighting street criminals from the vantage point of an ex-cop. In Streets of Rage 4, it's notable that one of the game's most oppressive forces are the police themselves. Streets of Rage 4 is never pointed about the many challenging decisions it makes — but that hasn't stopped it from feeling contemporary, fresh, and vital. Gaming's favorite rave is back in a pair of new digs.

Streets of Rage 4 is out now on PC, PlayStation 4, Nintendo Switch, and Xbox One.