Accessibility links
Laid Off By U.S. Contractor, Iraqi Interpreters Fear ISIS Retaliation A U.S. military contractor abruptly laid off most of the U.S.-led coalition's Iraqi interpreters. Some have gone into hiding. "We ... will be easily hunted down," a group wrote to the U.S. military. 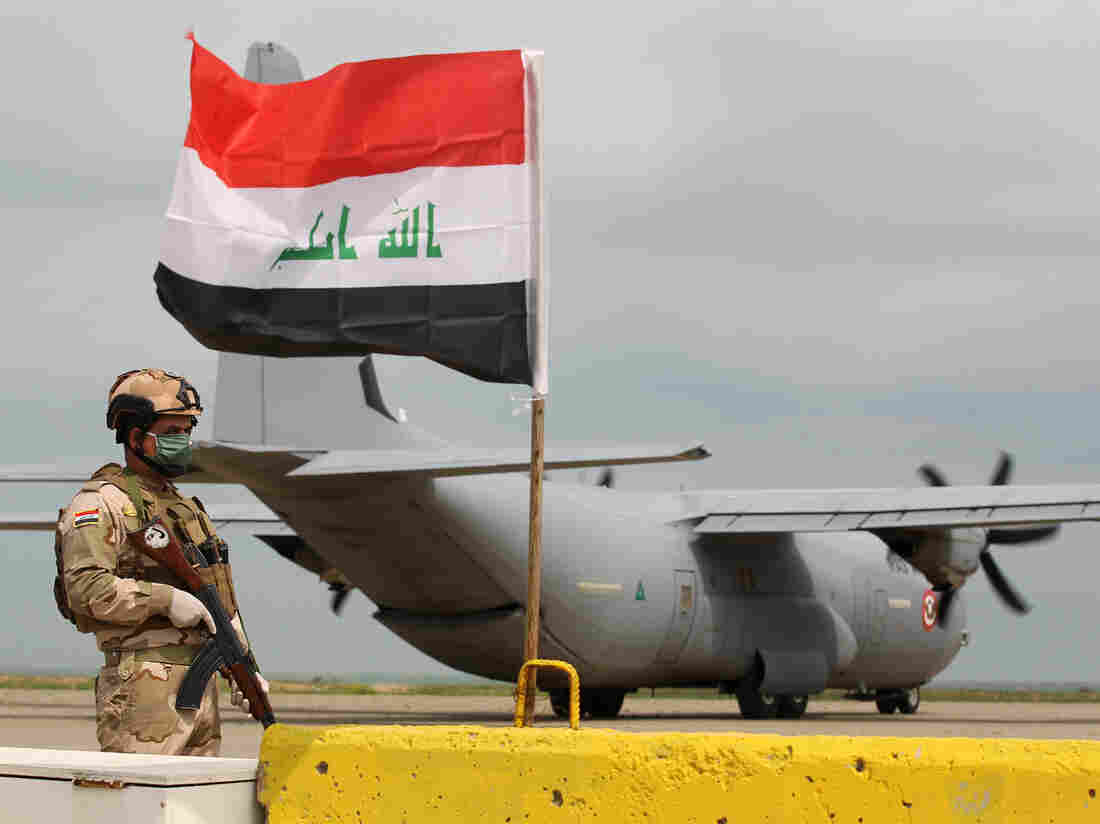 An Iraqi soldier stands guard near a U.S. military air carrier at the Qayyarah Airfield West, before the U.S. transferred the base to Iraqi forces in March. Ahmad Al-Rubaye/AFP via Getty Images hide caption 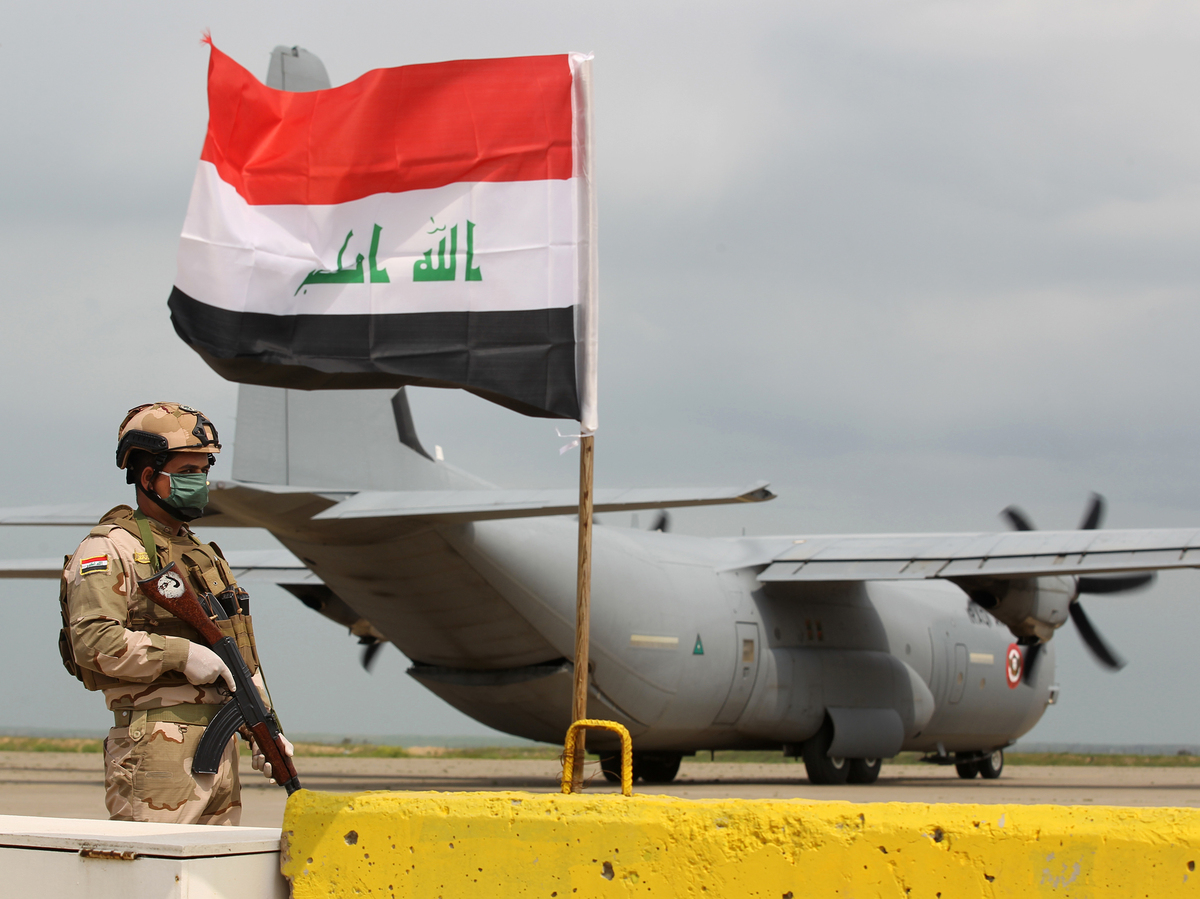 An Iraqi soldier stands guard near a U.S. military air carrier at the Qayyarah Airfield West, before the U.S. transferred the base to Iraqi forces in March.

A U.S. military contractor in Iraq has abruptly laid off the majority of the U.S.-led coalition's Iraqi interpreters. The move has left many fearing retaliation from ISIS and Iran-backed militias hostile to U.S. forces, and forced some into hiding.

The sudden layoffs — and lack of safeguards or responses to the interpreters' concerns — appear to be the latest examples of how the U.S. has left in harm's way Iraqi citizens who risked their lives with U.S. forces.

Virginia-based Valiant Integrated Systems last month informed more than 200 locally hired Iraqis interpreting for U.S. and coalition forces that they were being laid off immediately, according to several former contract workers. They asked to remain anonymous because they were worried about their safety and prospects for future employment.

The U.S. military, asked about the layoffs, told NPR that staffing levels at several Iraqi bases had been reduced "as a result of our Iraqi partners' success against ISIS." The military's Combined Joint Task Force-Inherent Resolve, which heads the anti-ISIS coalition in Iraq and Syria, said in a written response to NPR's queries that as a result, "the military Coalition repositioned military and civilian personnel out of several Iraqi bases. As our operational mission reduced, the requirement for contracted staff reduced."

It did not respond to a question about whether it shared the interpreters' concerns about retaliation by Iran-backed militias or ISIS elements.

A group of laid-off linguists who had been working in the Kurdistan region of Iraq wrote to the Combined Joint Task Force to express fears that the move has left many of them in danger and unable to safely seek other employment.

"Most of these linguists are easily identified ... especially those who have been working in coalition forces fighting against ISIS on frontlines," reads the email, seen by NPR. "We ... will be easily hunted down and there will be a massive threat on our lives and our families as well."

The group asks for U.S. protection for interpreters whose lives may be in danger as a result of working with coalition forces.

The task force first said it had not received the email and then, in a follow-up response to NPR, said: "CJTF-OIR received an email from an anonymous civilian email address claiming to represent contract linguists employed in support of CJTF-OIR. We do not intend to respond to the anonymous email."

It added: "CJTF-OIR has neither policy nor recommendations for linguists regarding how to deal with threats associated with their Coalition work."

Many of the interpreters worked with U.S. and coalition personnel at training centers for Iraqi Kurdish and Arab forces, but also went on missions with Iraqi forces and coalition advisors. Iran-backed militias opposed to the U.S. presence in Iraq now form a significant part of Iraqi security forces.

Some of these militias have publicly warned Iraqis working with coalition forces that they could be targeted.

"They say, 'You've become a kafir [unbeliever],'" says one interpreter.

He says he and other Iraqi linguists have warned coalition personnel of potential threats against coalition forces by some of the same Iraqi personnel they have trained.

The IDs and personal details of interpreters working with coalition forces are provided to the Iraqi defense and interior ministries.

"They have a copy of my national ID, my passport number, everything," says an interpreter in central Iraq — laid off, he says, after eight years of almost continuous contracts with the U.S. military.

Two interpreters tell NPR a Valiant local manager warned them that anyone who spoke to journalists about their concerns or retained a lawyer would be blacklisted from future jobs with Valiant.

Valiant, through Sitrick and Company — a strategic communications firm specializing in crisis management — responded to a detailed NPR inquiry about the layoffs with a brief statement. The company blamed the COVID-19 pandemic for the layoffs and not U.S. withdrawals from bases, the reason cited by the U.S. military.

"...[T]he changing requirements, priorities and deployment of resources that are currently specified by our customer amid the global pandemic resulted in a directed reduction in the local workforce. The actions taken are not unilateral, but are aligned with the mandate in our long-standing U.S. Government contract. As always, staffing levels are dictated by the services being provided to our customer," said the Sitrick and Company statement.

The interpreters tell NPR that those laid off were given no explanation as to why they'd been selected. As far as they could tell, language test scores and recommendations from coalition advisors did not appear to have been factors in the layoff decisions.

Iraqi linguists hired locally by Valiant generally make less than $20,000 a year to provide simultaneous interpretation between coalition and Iraqi forces. The contracts do not specify any details of life insurance or benefits for long-term disability if the interpreters are killed or wounded on the job.

When asked by NPR about the existence or extent of compensation in such cases, Sitrick and Company said Valiant does not discuss contracts or benefits.

Valiant was created by former executives of Supreme Group, a U.S. military contractor, after the company was fined $434 million in 2014 for major fraud in supplying food and water to U.S. troops in Afghanistan. It was one of the biggest judgments ever against a U.S. contractor.

Supreme's former president and chief counsel, hired by Supreme after the fines were imposed, founded Valiant after buying most of Supreme's contracts.

A press release announcing the new company noted that Valiant management had been recognized for overseeing "industry-leading ethics and compliance programs."

While the U.S. Army's Intelligence and Security Command (INSCOM) oversees the contract for linguists, Valiant oversees the work and independently decides whom to hire and fire.

Last year, the Pentagon's inspector general found that Valiant fired a linguist after trying to transfer her from Baghdad to Basra, in retaliation for her complaining to U.S. Embassy security officials about being assaulted by a coworker on embassy grounds.

Valiant argued that a complaint about an interaction occurring after the work day was not protected and the inspector general did not have the jurisdiction to make the findings.

INSCOM declined to answer whether it was involved in the mass layoffs or whether it shares the interpreters' concerns about retaliation.

Despite the U.S. military position that ISIS no longer poses a significant threat, the group has resurfaced in Iraq's Sunni provinces and in the mixed province of Kirkuk.

The U.S. military's withdrawal from several bases in Iraq followed attacks on bases by Iran-backed militias. An Iraqi-American interpreter contracted to Valiant, Nawres Hamid, was killed at a base near Kirkuk last December, a factor President Trump cited in a tweet about retaliation against militia forces. In March, two U.S. service members and a British service member were killed in a rocket attack on another base north of Baghdad.

Since January, when a U.S. drone strike killed Iranian commander Gen. Qassim Soleimani and a senior Iraqi security official in Baghdad, opposition by powerful Iran-backed political groups to U.S. troops' presence in Iraq has increased. The U.S. and Iraq opened talks this week on the future of the two countries' relationship. Interpreters say they will be in even more danger in the event that U.S. forces withdraw from Iraq.

The U.S. has been widely criticized by veterans and human rights groups for leaving Iraqi and Afghan interpreters in danger, after they risked their lives working for U.S. forces in conflict zones.

Starting in 2006, Afghans and Iraqis who worked with the U.S. were able to apply for the Special Immigrant Visa program, recognizing their work and risks from militants. A separate program within that program was dedicated to interpreters — capping the number of visas to be issued to Iraqis and Afghans each year at 50. The program issued 1,740 visas over 11 years, until 2017. In 2018, the U.S. issued only two special immigrant visas to former interpreters from Iraq.

A broader special visa program for Iraqis working with the U.S. government ended in 2014. The State Department inspector general is investigating delays and roadblocks in the SIV program.

Some of the Iraqi interpreters laid off last month have gone into hiding. All are trying to keep a low profile.

"If I want to go shopping, I go out at night," says a Baghdad interpreter. "If I need to go out, I wear sunglasses and a hat so that no one will see me in the street and say, 'Hey, you're an interpreter with the U.S. Army.'"

He says most of those laid off have no income now, and no way to find other jobs to support their families.

"Maybe I can start a shop, but there will be people who will recognize me. If I want to look for a job with another company, I cannot put on my CV, 'I was an interpreter with the U.S. Army,'" he says. "That means I am asking someone to kill me."