Accessibility links
Review: 'Kipo And The Age Of Wonderbeasts' Returns Netflix's post-apocalyptic animated series about a girl and her friends in a world of giant mutant animals is so colorful and sunny it makes the end of the world look ... kinda fun. 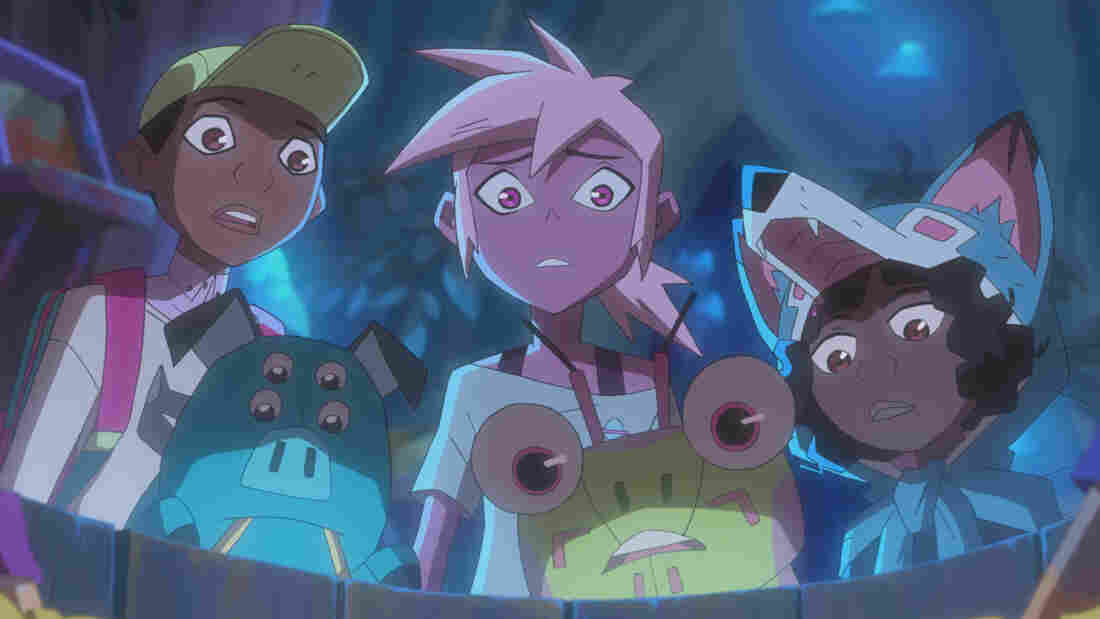 Kipo (center) and friends make their surprisingly cheerful way through a post-apocalyptic hellscape beset by giant mutant animals in Kipo and the Age of Wonderbeasts. Netflix hide caption 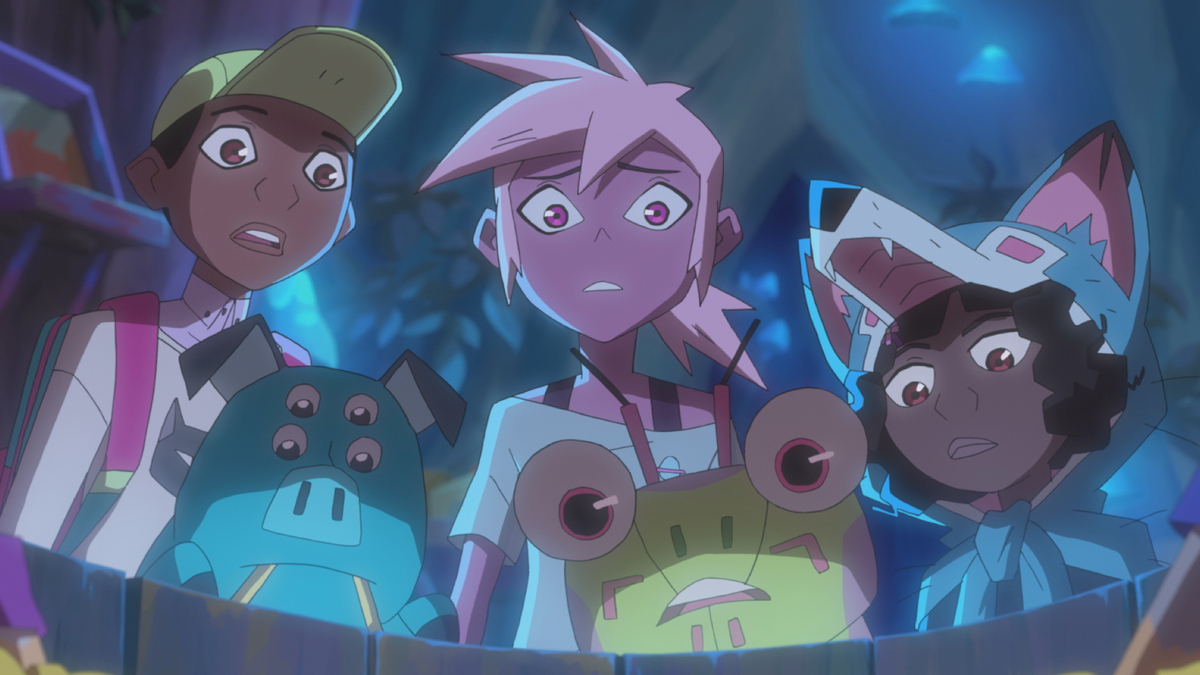 Kipo (center) and friends make their surprisingly cheerful way through a post-apocalyptic hellscape beset by giant mutant animals in Kipo and the Age of Wonderbeasts.

No, I hear you: Now doesn't seem the ideal moment to Netflix-and-chill with an animated series about the last vestiges of humanity struggling to survive.

I mean, imagine the pitch meeting:

The surface of the earth is overgrown with plant life — and with overgrown animals: mutated beasts, 300 feet tall, that stomp across the land hunting for prey.

Which is to say: for humans, who, now firmly at the bottom of the food chain, have retreated to vast underground burrows to protect themselves.

It all sounds ... pretty bleak, I get that. Depressing, even. Like if you mashed up The Walking Dead with the popular anime series Attack on Titan, in which gruesome giants gobble up humanity's last survivors like so many chocolate-covered cherries.

And I haven't even mentioned the violent gangs of mutant, human-sized animals who've staked out their own territories, making the Earth's surface a deadly place for the few humans who still live there.

Netflix's Kipo and the Age of the Wonderbeasts, which returns for a second season Friday, June 12, manages to be anything but bleak and depressing. It's bright and sunny, colorful and funny, and ... then, there are those tunes.

In just about every episode, somebody bursts into song.

Usually, that somebody is our hero Kipo, voiced by Karen Fukuhara. She's a 12-year-old burrow girl who's lost her people and her home after it was destroyed by an enormous, six-armed mega-monkey; must be Tuesday.

She hasn't lost her spirit, though — she remains relentlessly chipper and deeply empathetic; she's much more willing to talk to those gangs of mutated animals than fight them. Even when they happen to be giant snakes obsessed with heavy metal (who shred on electric guitars using their tongues ... so in that sense, the licks they play are ... very literal ones).

She also meets a pack of wolves dressed like Carl Sagan who study the cosmos — they're led by two alphas, called (wait for it!) Billions and Billions, voiced by John Hodgman and the Wu Tang Clan's GZA. It's a match that seems somehow ... weirdly inevitable. When they start rapping together about the history of the known universe, you find yourself thinking, This. Yes. Of course. I mean it was bound to happen, sooner or later.

Season one had Kipo finding a group of friends: the hard-bitten warrior-tween Wolf (voiced by Sydney Mikayla), the no-braver-than-he-needs-to-be Benson (voiced by Coy Stewart) and his pal Dave (voiced by Deon Cole) a mutant bug who's constantly cycling through his life-cycle, littering the landscape with molted carapaces. There's also the mutant, four-eyed, six-legged pig Mandu (oinked by Dee Bradley Baker). Together, they helped Kipo search for her people, following clues left by her father.

Along the way they met more of those animal gangs — Timbercats (lumberjack kitties), Mod Frogs (frogs in black suits and pencil mustaches), Dubstep Bees (bees that drop the beat), a Water Bear (a strangely sinister tardigrade), a pair of rats who run a theme park, and a brace of skunks on jet-skis.

(That was a real thing in the middle ages, by the way. Telling the future by studying cheese? Tyromancy, it was called. Look it up.)

If season one was about Kipo discovering the weird, brilliant, visionary world of the series, season two is about her journey of self-discovery. She realizes that her parents kept some things from her about who she is. Like why, in times of stress, she keeps growing purple fur. And claws. And fangs.

In ways both subtle and unsubtle, Kipo and the Age of Wonderbeasts is about identity: the stuff Kipo comes to learn causes her to re-evaluate her relationships with her family, and her friends and, especially, with herself.

Season two is also about digging deeper into the characters established in season one — including the ostensible villain of the piece, a despotic mutant mandrill in a powdered wig (long story) voiced, with erudite relish, by Downton Abbey's Dan Stevens. Assumptions are questioned, motivations exposed, emotional depths plumbed.

All of this, plus the series' matter-of-fact commitment to diversity allows the show to comment on things like class, race and sexuality in specific ways that grow organically out of the characters, instead of artificially imposing those concepts on top of them.

If you were to combine the vast world-building of Avatar: The Last Airbender with the heart and inclusivity of Steven Universe, you'd wind up with something that looked a lot like Kipo and the Age of Wonderbeasts.

What are you, made of stone?