Accessibility links
Coronavirus Is Accelerating Colleges' Retreat From SAT, ACT Scores The SAT and ACT's reach beyond college admissions is pervasive, with many states requiring students take one or the other in order to graduate high school. 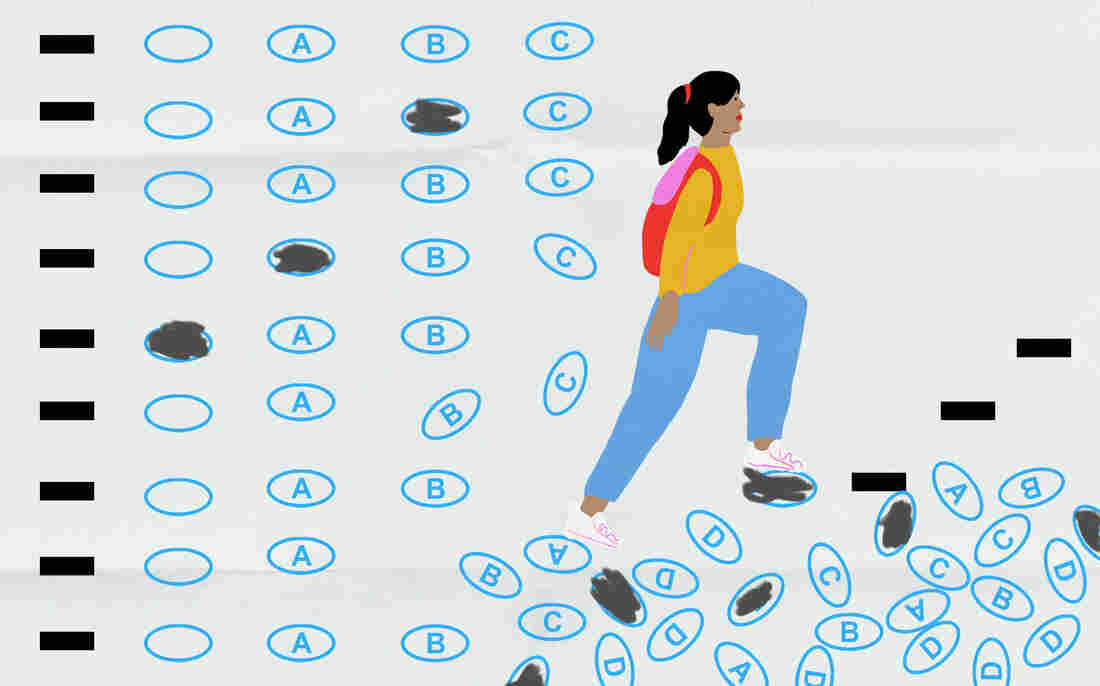 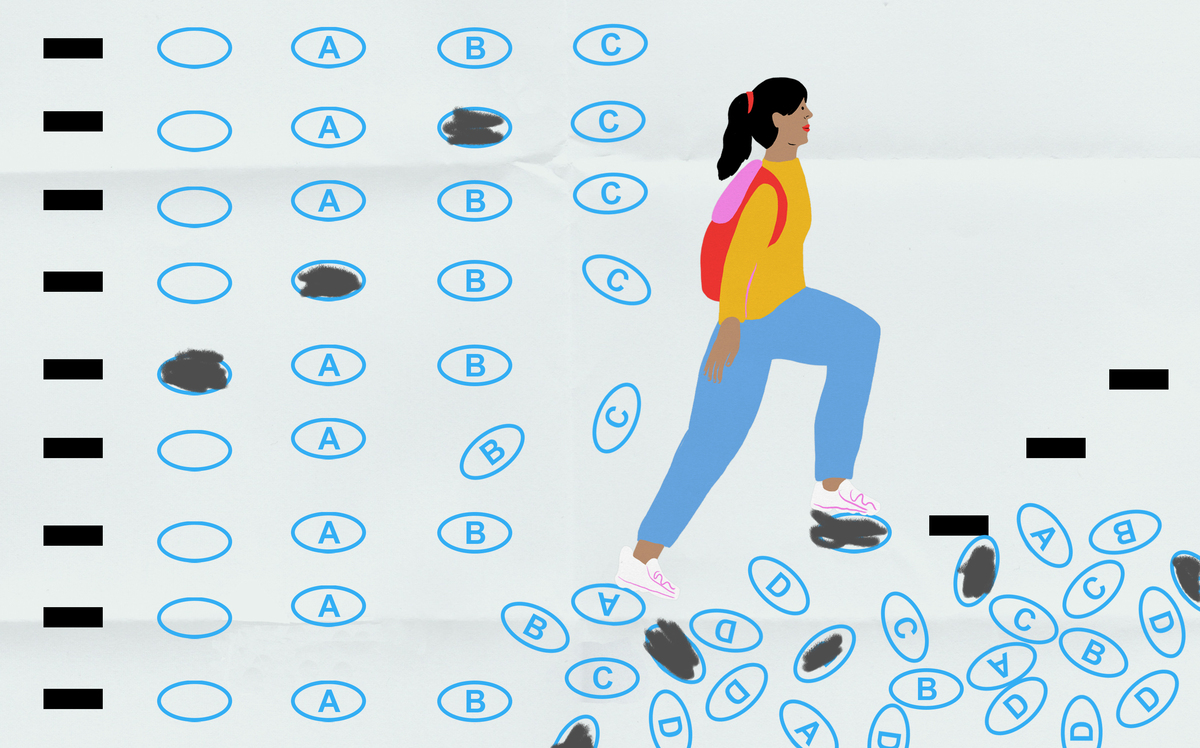 Like many high school counselors, Crys Latham has been paying close attention to the colleges that are announcing that they'll no longer require admissions exams for applicants. She's a big fan of giving students the opportunity not to submit their test scores.

"We put test-optional schools on every single one of our student's list to consider,'' says Latham, who directs college counseling at Washington Latin Public Charter School, in the nation's capital. "Because we know that not every student is going to like their scores, and a student's test scores are not indicative of their potential or ability to be successful."

In the last few months, Latham has had a lot of new schools to add to those lists. Nearly every day, more and more colleges announce plans to de-emphasize the role test scores play in admissions, even if only for next year's applicants.

It started almost as soon as the coronavirus closed down schools in the U.S. A wave of colleges announced that, due to the pandemic, they would put less weight on standardized tests. If students didn't have access to spring testing, how could colleges require them?

Case Western Reserve University in Cleveland was one of the earliest schools to use the coronavirus as a catalyst for change, but dozens of others followed. Some became test-optional, others test-blind. Some policies were just for a year, others have said they'll test the idea out for two or three years.

But then cancelled spring testing dates became cancelled summer testing dates. In a statement in June, the College Board, which administers the SAT, requested that colleges and universities "show flexibility," when it came to admissions testing, essentially requesting a shift towards a temporary test-optional policy.

More schools followed. The University of Virginia went test-optional for next year as did Ivy League schools like the University of Pennsylvania and Dartmouth College. The California Institute of Technology, or Caltech, announced it will be test-blind, meaning it won't consider the tests, for the next two years.

As schools continue to revamp testing policies, Crys Latham has been updating her students. She says they are excited about the news: "I now have kids who would never have considered those schools seriously before, didn't even see it as an option for them because they felt like the scores wouldn't have given them a chance in admission," she says, "but now, they say, 'Oh wow! Maybe I have a shot ... maybe it is possible for me.' "

'We saw the writing on the wall'

It's not just students and families that are taking note; other universities are watching, too.

Christine Harper, the associate provost for enrollment management at the University of Kentucky, says she has long considered test-optional policies, but the timing wasn't right.

The pandemic "really pushed us into having that conversation on our campus," she says. "We saw the writing on the wall."

The university has been following the announcements from other schools, and Harper says the statement from the College Board urging colleges and universities to be flexible helped too.

In Kentucky, the state pays for students to take the ACT in school, that means, Harper says, that the majority of in-state students have access to it, so there hadn't previously been any urgency in forging the exam in admissions.

But this spring, there were a handful of students still getting in their applications for the upcoming fall who hadn't had a chance to submit their testing, and so the University has been lenient with testing requirements for this coming fall.

That opened the door to more possibilities: The University of Kentucky is in the process of becoming "test-flexible," meaning students can choose to apply with a test score or not, Harper says. There hasn't been a formal announcement and it's unclear how long the flexible policy will last, but Harper says she hopes to have more details for students and families by mid-July.

In all the debate over exam scores, it's worth remembering that only a handful of schools in the U.S. are actually highly selective. Just under 50 schools have acceptance rates less than 20 percent.

These schools represent about 3 percent of U.S. colleges and universities, according to the Pew Research Center. More than half of U.S. colleges admit two-thirds or more of students who apply. Many public four-year and community colleges are open access, meaning they don't have competitive admissions. No exams required.

Community colleges have long been without these tests in the admissions process, says Laurie Franklin, who oversees enrollment and student financial services at Everett Community College in Washington State. To schools that are announcing test-optional policies, she has this message: "Welcome to the club."

At Everett, they do not use ACT and SAT for admissions, but in other areas the exams are used to determine what class level an incoming student will place into. Using the SAT or ACT for this purpose is "a budget-neutral solution for students."

While high schools may not pay for one of their graduates to take a placement exam at a college or university, in many states, they will pay for a student to take the SAT or ACT. In fact, 25 states require high school students to take the SAT or ACT, offering the exams during the school day, free of cost. In some states, like Tennessee and Idaho, taking a college entrance exam is baked into high school graduation requirements.

"The tests are widespread in high schools," says Franklin, "so it's only natural for colleges to use them — at least until the next, better thing comes up."

The SAT and ACT also play a role at many colleges and universities in awarding scholarships, especially merit scholarships that are not based on a student's financial need. State scholarships, like Florida's Bright Futures, also use the scores for eligibility.

Many students and parents in Florida complained this spring that they had been unable to re-test in order to raise their scores, because of the pandemic. On Wednesday, the state issued an emergency order that pushed back the deadline to submit scores to the end of July, but it's unclear if students will be able to test in time for the new deadline.

Every day that Sadie Bograd, 16, entered her high school freshman year, she was greeted by a sign that listed the ACT scores needed to get into several colleges. She rarely thought about this daily reminder, she says; test scores are almost subconscious at this point.

Standardized tests are, too. Taking them, says Bograd, who now attends a different school, Paul Laurence Dunbar High School in Lexington, Ky., has been "part of my educational experience pretty much since middle school."

Bograd says that even among her friends who have done well on the ACT or SAT, they don't believe the exams to be accurate or reliable measures of intelligence, and that the tests often bring more stress to their lives.

Lawsuit Claims SAT And ACT Are Illegal In California Admissions

She's a rising senior, so she gets a daily barrage of college material in her inbox. She says the colleges sending out test-optional notices or announcing flexibility in the admissions process, have made her pay attention, and reconsider the "vibe" of certain schools: "Going test-optional felt like a sign that they really cared about what students were going through and that they understood."

She's hopeful that society will begin to de-emphasize these tests too.

But even with test-optional policies, students who do well will continue to submit their scores.

And with SAT and ACT so embedded in high schools, even if colleges and universities continue to de-emphasize them, it wont signal the end of these tests, explains Michal Kurlaender, a professor of education policy at the University of California Davis, who studies college access. Plus, she insists, assessments aren't all bad, it's just important to understand how they are used.

"Testing in admissions has assessed not just what kids know, but the opportunities that they've had access to. They reflect a lot of deep inequalities that we have in our system," she says. "So, it means that when they're used, they have to be used with incredible caution."

For the SAT and ACT, she says, society has kind of run away with the narrative of them, inflating their importance. She points to the Varsity Blues scandal as an example of the collective obsession. "Getting a kind of certification about your intelligence is a powerful thing with young people," she says. At the same time, Kurlaender points to research that a negative message — like a score purported to be low — can have a strong impact on students' future schooling and career decisions. "Students place enormous pressure on themselves with these tests," she says, "and when they don't perform as they expected, they can feel very demoralized."

Crys Latham sees this with her students in Washington, D.C. "I think that's so unfortunate when you have just one tiny — in my mind, insignificant — factor that is making the decision for a kid about what their dreams are."

Even without tests, admissions have issues with equity

In California, where the UC system voted in May to phase out the SAT and ACT in admissions at its nine campuses, the task now turns to what will replace it.

Eddie Comeaux, a professor of higher education at UC Riverside, leads a committee focussed on the admissions of undergraduate students throughout the UC system. "The UC decision really gave us an opportunity to see, 'What is the role of standardized testing?' " he says. "Hopefully whatever recommendations we put forth are aligned with principles of equity and fairness."

University Of California To End SAT And ACT Admission Requirement

In addition to studying new assessments, he's also turned his attention to the "readers," the folks who evaluate the application. He says those people need to come from diverse backgrounds and have implicit bias training, because they're the ones tasked with drawing from the context of a student's situation, school and environment.

"There is a healthy, growing skepticism about standardized test scores," says Andrew Ho, an expert in educational testing at Harvard University. "But there is a way in which that sort of oversells how weighty they are in a selective admissions process."

He says one of the reasons for having standardized testing in college admissions was an attempt to make fair comparisons. Because, he says, other forms of measurement — grades, essays, extracurricular activities — can also be rife with inequities. As pressure decreases on test scores, and increases on other measures, like GPA or an essay, those new focus points also carry risks of manipulation and inflation.

"Once you realize that [colleges] care about this one thing, what do we do? Well, we game it," Ho explains. "We try as hard as we can to inflate that one thing such that it no longer actually indicates what I'm capable of doing."

Ho says just because we're rethinking these admissions tests, that doesn't mean we've rooted out inequities in the pathways to higher education.