Accessibility links
2 Years After Singapore Summit, U.S.-North Korea Relations Back To Square 1 In a statement marking the summit's anniversary, North Korea accused the Trump administration of using the historic meeting to score political points and to isolate Pyongyang. 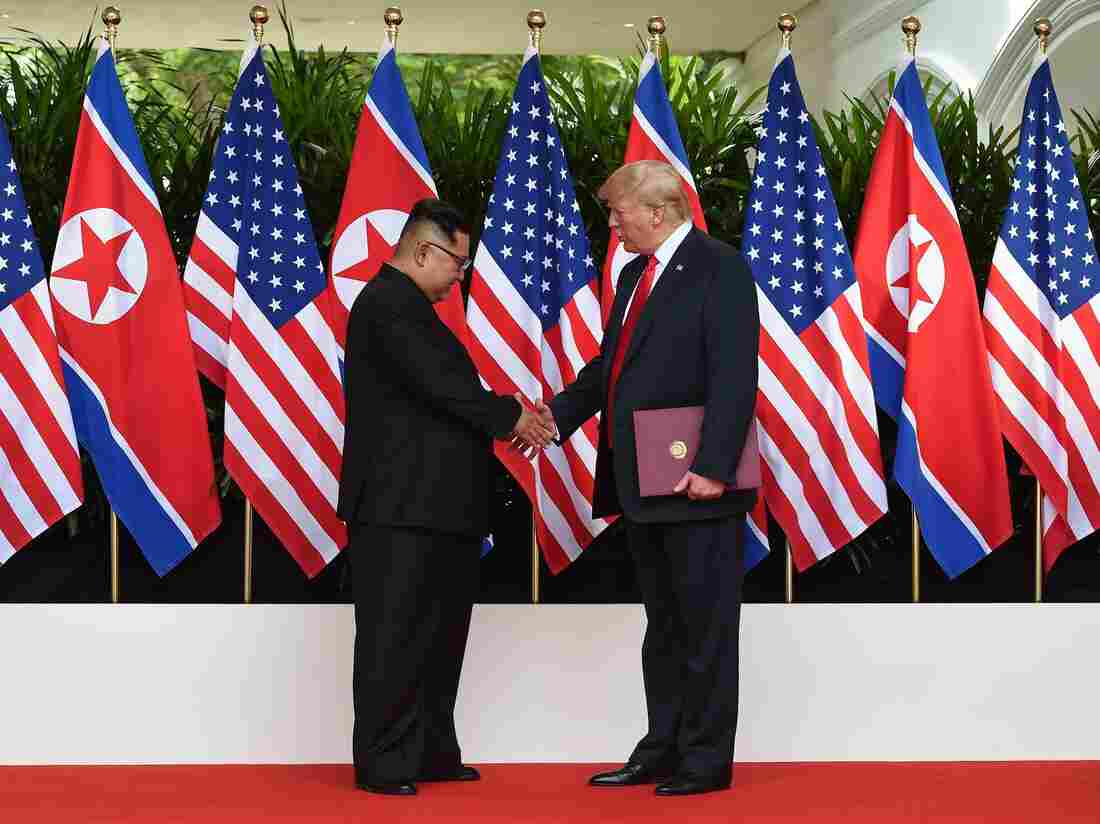 North Korea's leader Kim Jong Un shakes hands with President Trump after taking part in a signing ceremony at the end of their historic U.S.-North Korea summit at the Capella Hotel on Sentosa island in Singapore on June 12, 2018. Anthony Wallace/AFP via Getty Images hide caption 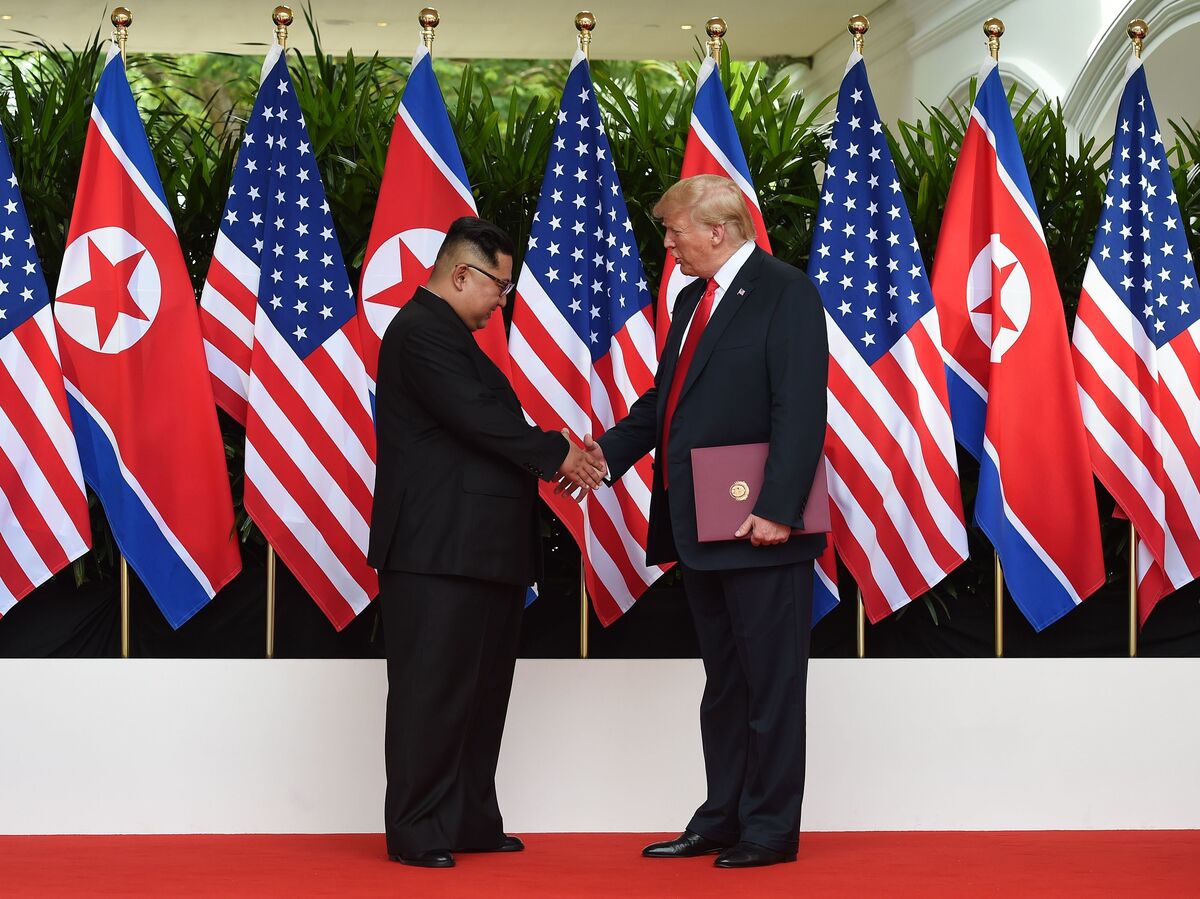 North Korea's leader Kim Jong Un shakes hands with President Trump after taking part in a signing ceremony at the end of their historic U.S.-North Korea summit at the Capella Hotel on Sentosa island in Singapore on June 12, 2018.

Two years after the first-ever face-to-face between leaders of the U.S. and North Korea — hailed by President Trump as a major breakthrough in relations — Pyongyang on Friday labeled the historic summit an "empty promise" and accused Washington of hypocrisy.

In a statement Friday marking the second anniversary of the meeting between Trump and Kim Jong Un in Singapore, North Korea's Foreign Minister Ri Son Gwon accused the Trump administration of using the summit to score political points and to isolate Pyongyang.

"Never again will we provide the U.S. chief executive with another package to be used for achievements without receiving any returns," he said.

Instead of wanting to improve relations, Ri said Washington is "hell-bent on only exacerbating the situation."

"Nothing is more hypocritical than an empty promise," he said in the statement carried by North Korea's official KCNA news agency.

FACT CHECK: U.S. And North Korea After Their Singapore Summit

Ri pointedly questioned the value of the personal chemistry between Trump and Kim, which both leaders have continued to affirm, even as ties between their countries soured. "We see that there is nothing of factual improvement to be made in the [North Korea]-U.S. relations simply by maintaining personal relations between our Supreme Leadership and the U.S. President," he commented.

He added that Pyongyang will remain focused on its strategic goal "to build up more reliable force to cope with the long-term military threats from the U.S."

The foreign minister's words come as North Korea has suddenly ramped up its rhetoric against archrival South Korea and as Kim's sister, Kim Yo Jong, appears to have stepped into a more public role just as her brother has become less visible amid persistent rumors of ill health.

In response to defectors who for years have launched leaflet-filled balloons containing anti-Pyongyang messages into the North, Kim Yo Jong authored a polemic in the official Rodong Sinmun newspaper, calling the perpetrators "rubbish-like mongrel dogs."

Pyongyang is likely to have more provocations in store. Kim Jong Un threatened in his New Year's address to unveil a new strategic weapon. On Thursday, Kwon Jong Gun, director-general for U.S. affairs at North Korea's Foreign Ministry, suggested that Pyongyang would not let Trump be distracted by domestic politics and that the U.S. had better keep its nose out of inter-Korean affairs if it wants the "easy holding of upcoming presidential election."

It's all a far cry from two years ago, when for a brief moment it appeared that the long-fraught U.S.-North Korea relationship might finally be thawing.

After months of trading over-the-top threats of annihilation and personal insults — most memorably Trump's labeling of Kim as "Little Rocket Man" and North Korea's use of the archaic "dotard" to describe Trump — the two leaders improbably stood side by side in Singapore.

They shook hands and smiled broadly for the cameras. The president said he trusted his North Korean counterpart (and later quipped that the two leaders "fell in love"). The two sides signed a vague but hopeful agreement that was advertised as a precursor to a formal end to the Korean War and denuclearization of the Korean peninsula.

Noting the failure of past attempts to rein in North Korea's nuclear program, the president told reporters that he thought Kim would keep his summit promises. "I may be wrong. I mean, I may stand before you in six months and say, 'Hey, I was wrong.' "

But after a moment of reflection, "I don't know that I'll ever admit that," Trump said, adding, "but I'll find some kind of an excuse."

Most experts, however, were skeptical from the start — a skepticism that was quickly justified by events. Efforts to follow up on the summit in meetings between Secretary of State Mike Pompeo and his North Korean counterpart, Kim Yong Chol, seemed to make little progress. And the initial promise of better relations between Pyongyang and Seoul raised by a separate summit weeks prior to Singapore also largely failed to materialize.

Meanwhile, it wasn't long before reports surfaced suggesting that North Korea had resumed production of intercontinental ballistic missiles and later had restarted a rocket test site.

A second summit in Vietnam between Trump and Kim in February of last year quickly fell apart. The two leaders left early, citing key differences that prevented them from reaching any concrete agreement.

The aborted meeting revealed the chasm separating the two countries' expectations. The U.S. wanted complete, unilateral denuclearization. North Korea wanted to bargain away part of its nuclear arsenal in exchange for sanctions relief, security guarantees and acceptance of its status as a nuclear power. Trump walked out, and Kim returned home empty-handed and humiliated.

When Pyongyang began an intense round of short- and intermediate-range missile tests last summer, Trump seemed intent on holding on to some semblance of progress, downplaying the tests and dismissing them as "very standard."

Since then, relations have stalled — on a better footing than the outright saber-rattling of 2017, but far from the promise of a different path that emerged from the Singapore summit.

Even so, the Trump administration seems to be in a holding pattern on North Korea. On Thursday, a State Department spokesperson told South Korea's Yonhap news agency that the U.S. remains committed to dialogue and open to a "flexible approach to reach a balanced agreement" with North Korea.