Accessibility links
A Possible Plan To Pull U.S. Troops From Germany Causes A Stir In Both Countries Reports that the White House wants to pull 9,500 troops out of Germany have raised concerns among current and former officials. Russia welcomed the possible move. 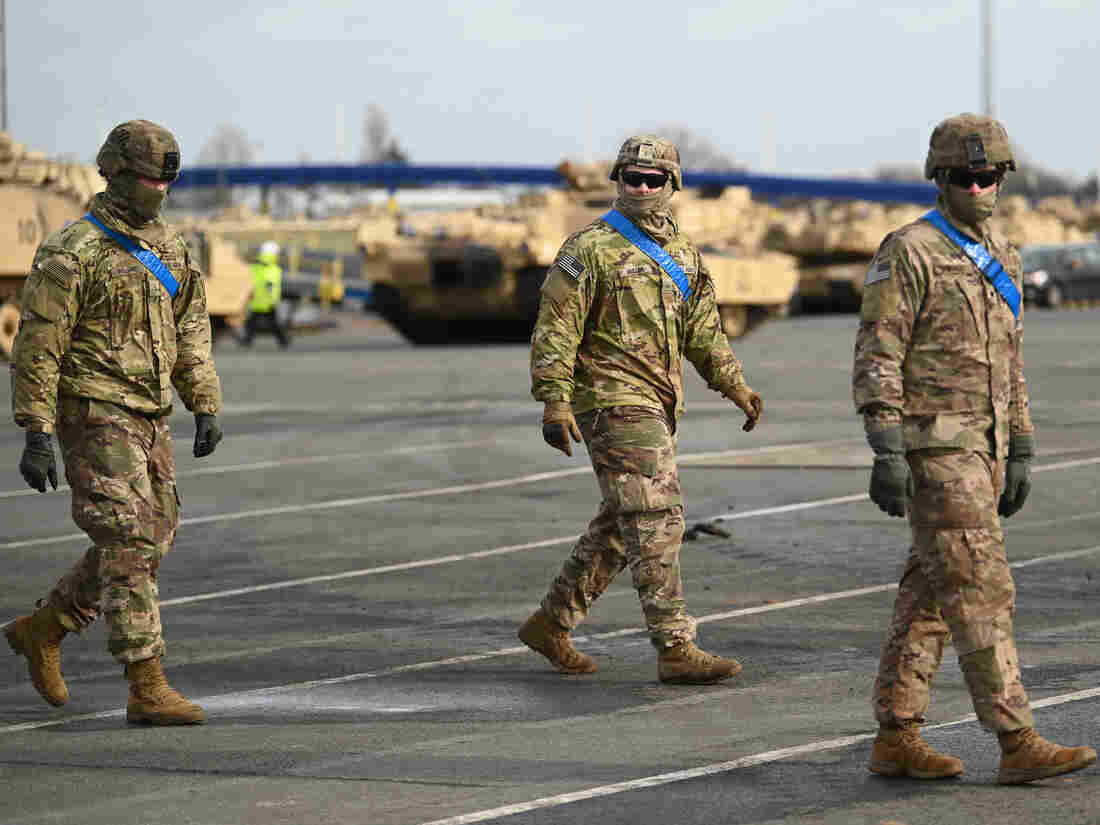 U.S. soldiers walk alongside tanks from the U.S. 2nd Brigade Combat Team, 3rd Infantry Division, parked at Germany's Bremerhaven port on Feb. 21. The U.S. could be considering drawing down a portion of its armed forces based in Germany. David Hecker/Getty Images hide caption 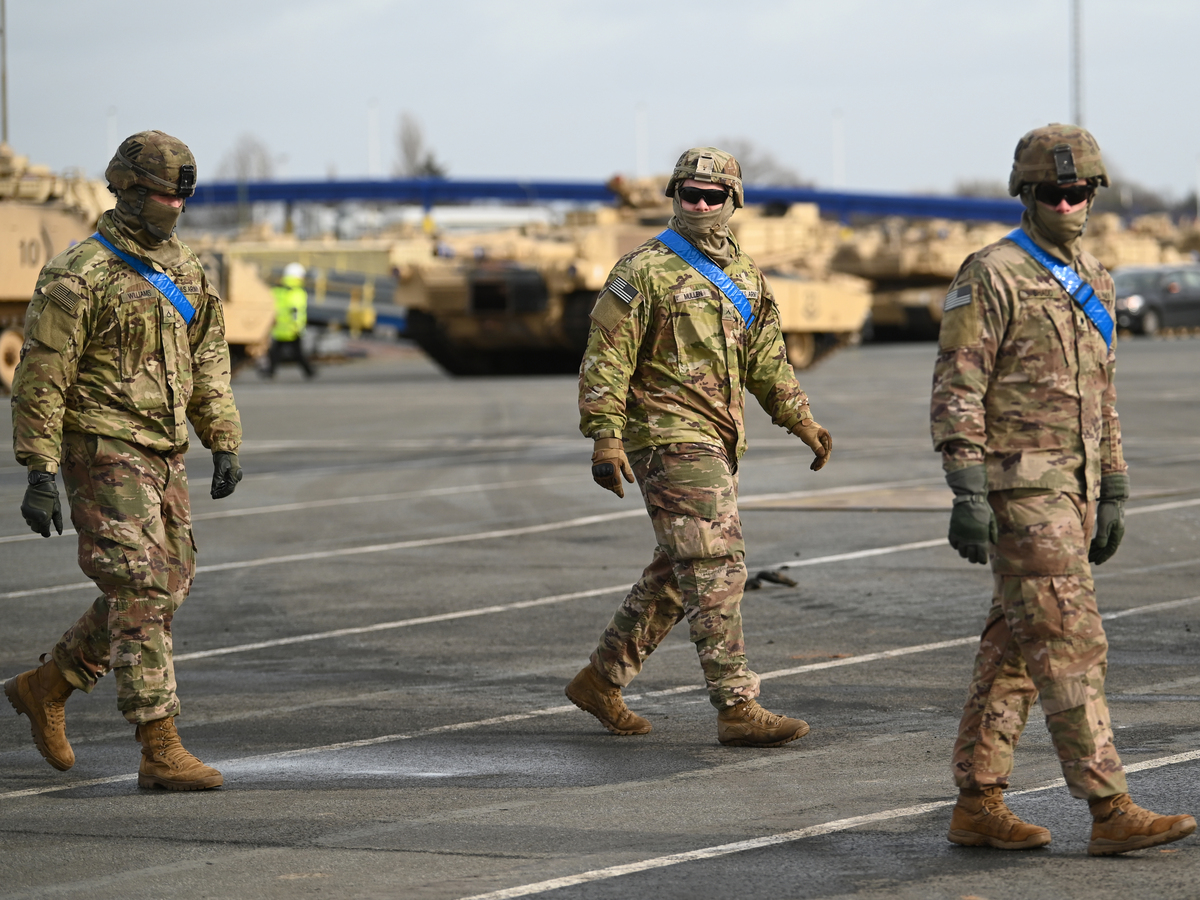 U.S. soldiers walk alongside tanks from the U.S. 2nd Brigade Combat Team, 3rd Infantry Division, parked at Germany's Bremerhaven port on Feb. 21. The U.S. could be considering drawing down a portion of its armed forces based in Germany.

People on both sides of the Atlantic are waiting for official confirmation whether the U.S. will pull 9,500 troops out of Germany — over a third of its total 34,500 troop presence in the country.

The possible proposal was first reported June 5 by The Wall Street Journal. A U.S. official confirmed to NPR the plan exists, but no orders have been issued.

Germany's government has also said Chancellor Angela Merkel was informed the U.S. is considering a troop drawdown from the country.

The possible plan has caused a stir among current and former officials in both countries, who view the U.S. military presence in Germany as one of the most strategic in the world.

"I would say it's essential," says Ben Hodges, a retired lieutenant general who commanded the U.S. Army in Europe from 2014 to 2017.

"They represent part of the U.S. contribution to NATO, which defends the interests of all 30 countries. But it also gives us a forward presence and access throughout Europe, Africa [and the] Middle East," says Hodges.

Hodges, who now holds the Pershing chair for strategic studies at the Center for European Policy Analysis, calls Germany a "transit hub" for the U.S.-led alliance and a crucial deterrence against Russia.

Despite this, the news of a possible troop drawdown inside a close U.S. ally highlights the deteriorating relationship between the U.S. and Germany as well as other European nations, whose soldiers fight alongside American forces in the U.S.-led alliance.

The former U.S. ambassador to Germany, Richard Grenell — who stepped down at the beginning of this month — has long advocated for a drawdown of U.S. troops in Germany. "American taxpayers no longer feel like paying too much for the defense of other countries," he told German tabloid Bild this week.

"With all respect to the former ambassador, it reflects a total lack of appreciation for what having forward base capability in Europe and specifically Germany does for American security and a lack of understanding of what those soldiers are doing," says Hodges. "I've read where he said, 'Hey, there's still 25,000 [troops]. That's a lot.' If this was the 19th century, 25,000 infantry with muskets walking across the field, that would be a lot." But it's barely enough in terms of modern warfare, he says.

NPR asked Grenell for comment by phone and email but he has not responded.

According to The Wall Street Journal, the Trump administration plans to cap the number of U.S. service members in Germany at 25,000 and wants to remove 9,500 troops by September.

Thomas Wiegold, a German expert on NATO, says that is unrealistic. "We are talking about thousands of dependents. We're talking about civilian employees and all this. So the timeframe seems rather unreal," he says.

German politicians are equally baffled. "Maybe the U.S. president feels a little bit worried about the fact that Germany and the German chancellor is a little bit like a role model of corona crisis compared to what happened in the U.S.?" wonders Jürgen Hardt, foreign affairs spokesman for Chancellor Merkel's center-right Christian Democratic Union party.

Hardt acknowledges the Trump administration's frustration over Germany's defense contributions in NATO, but he says after years of criticism, Germany is now increasing its defense budget by more than 10% a year.

One country that seems content hearing the news of a possible U.S. troop drawdown is Russia. Its Foreign Ministry spokeswoman said the Russian government welcomed President Trump's plan, adding that the U.S. should also remove its nuclear weapons in Germany.

Twenty-two Republican members of the House Armed Services Committee wrote a letter to President Trump saying they were "very concerned" about the possible plan to remove troops from Europe.

"We believe that such steps would significantly damage U.S. national security as well as strengthen the position of Russia to our detriment," the letter said.

Retired Lt. Gen. Hodges agrees that Germany needs to spend more on its military, but he says it's not justification to remove so many U.S. troops from the country.

That a week has passed since the Journal first reported this tells him something about the Trump administration. "That tells me that they don't have a plan and they they've come up with a solution in search of a problem. And now they're trying to make it work," he says.

Hodges says the timing of this story — in a crucial election year for Trump — tells him this was likely a political decision. And he hopes that for the sake of security in Europe and in the United States, this story of such a big troop drawdown remains just a story.