Accessibility links
In East Texas, Death Of George Floyd Brings Activism To A Region Of Rare Protest More than a half century after the civil rights movement of the 1950s and '60s, there remains little tradition of protest in East Texas, and scant experience with organizing.

6:15
In East Texas, Death Of George Floyd Brings Activism To A Region Of Rare Protest 6:15 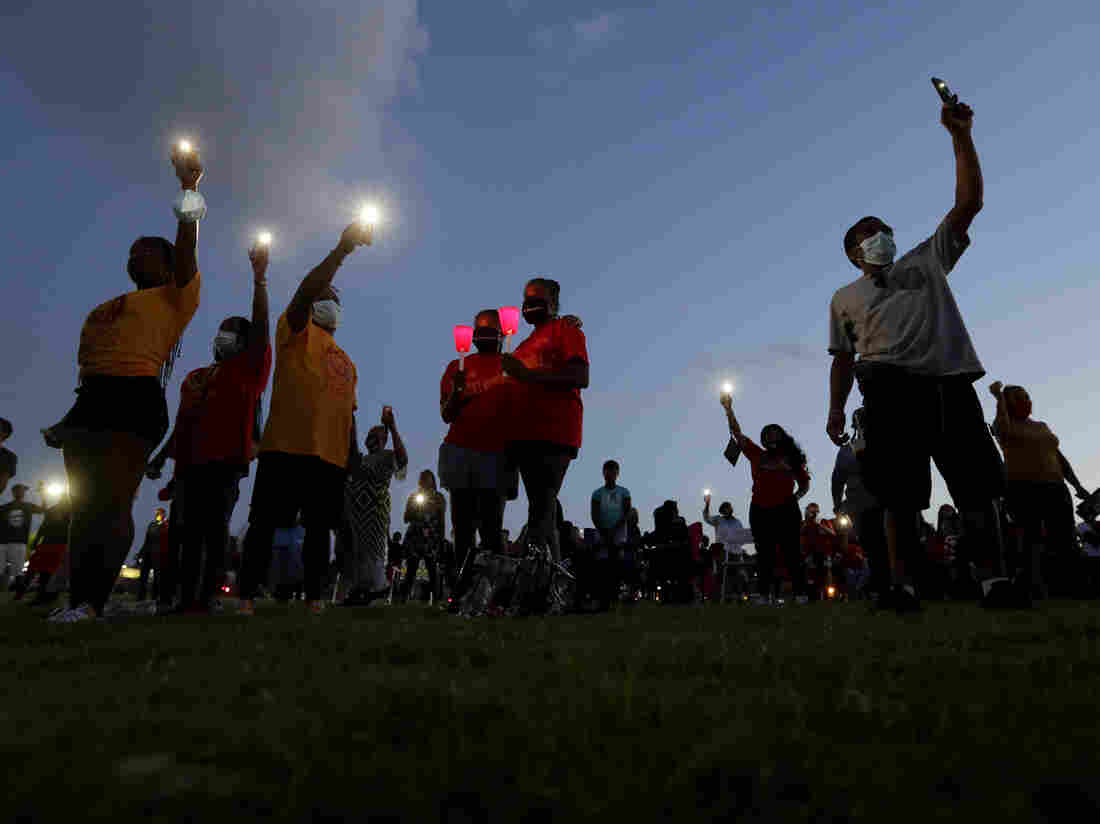 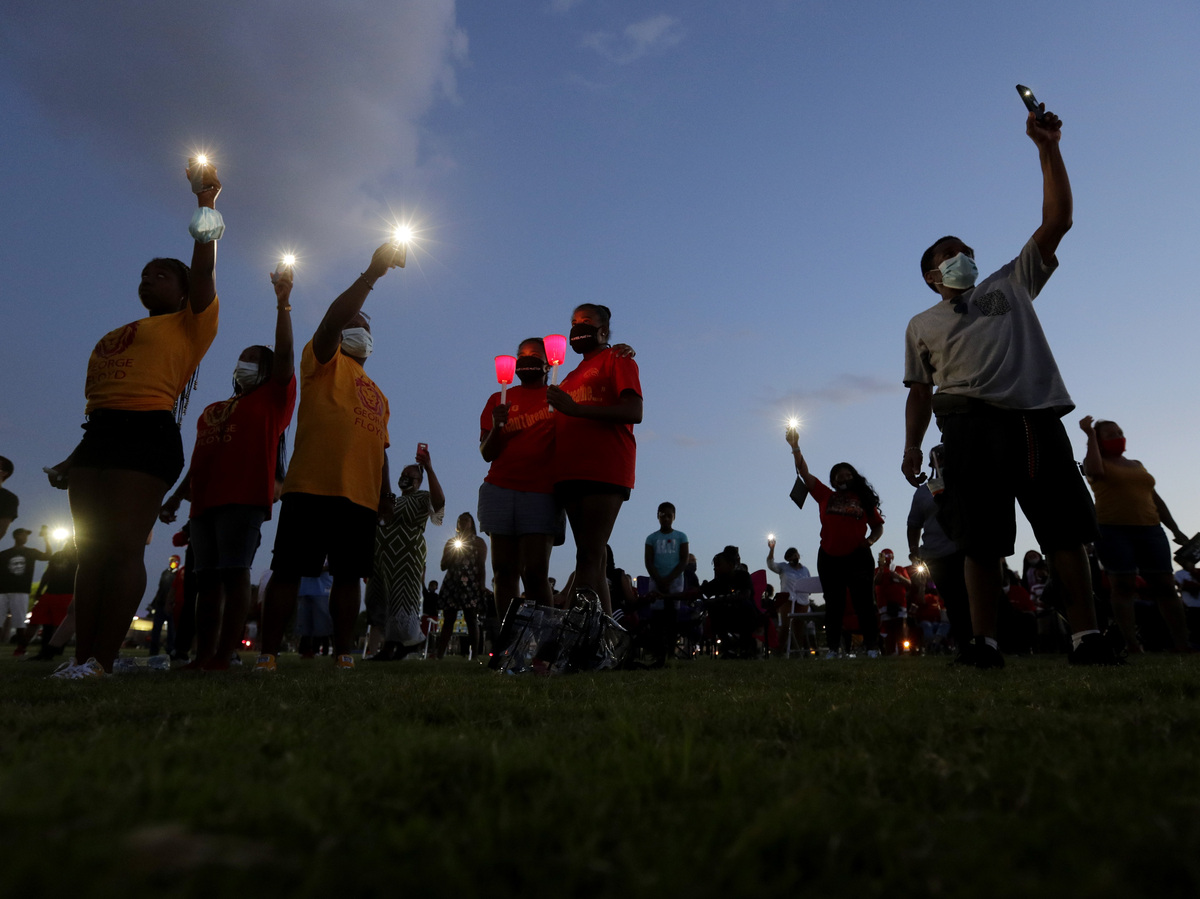 The civil rights movement largely passed East Texas by in the 1950s and '60s. Today, more than a half century later, there remains little tradition of protest in the region — part of plantation country during slavery — and scant experience with organizing.

Houston is the gateway to East Texas, and with the funeral service for George Floyd this past Tuesday, the city, for a few short hours at least, became the focus of a national movement against police violence and systemic racism.

Now, organizers across the vast region are intent on making sure their voices continue to be heard. Whatever Black Lives Matter and other organizers build here, will be new construction.

Signs of this new energy have been steadily growing in East Texas since video emerged showing a white Minneapolis police officer kneeling on Floyd's neck for nearly nine minutes on May 25, leading to his death at the age of 46.

On the Saturday before Floyd's burial, protesters were rallying in Bergfeld Park in the city of Tyler, Texas, roughly 200 miles north of Houston. Burgers were cooking on a large grill with rotating cooks, while a bouncy house was bouncing away with children inside mimicking their parents, chanting, "No justice, no peace."

In the middle of the park sits a large amphitheater. Onstage was the rally organizer, who goes by the name Blue. Concerned for her safety, she did not want to give her full name. She wore a hospital mask, a bullet proof vest that came to her knees. She held a microphone in one hand and a megaphone in the other.

Rumors of threats against Blue's life – specifically, that she'll be shot on stage — had gotten back to her. She tried to explain to the crowd how she's been affected.

"I have gone through hella emotions this week. I went from standing up proud, standing in the street, because I know what I believe in. Then I went from everybody get off the street, get on the sidewalk, we need to be safe. I've had family members tell me I'm fighting a fight I don't understand. But we understand this," she says. "I understand this."

The crowd cheered, but it's all been too much for Blue. Her emotions overwhelmed her and she left the stage unable to get another word out.

A history of discrimination

There's a long history in East Texas of whites murdering black people who dare to raise their hand against discrimination. And while it's true Jim Crow is now dead, racial discrimination is alive and well.

Among those in attendance at the park was Amori Mitchell, 31, a nurse with her master's degree.

"We are out here basically because it is time for a change," says Mitchell. "And George Floyd was the last breath felt around the world because enough is truly enough. We have been dealing with various deaths from police brutality to just being targeted just for being black."

As she speaks, Mitchell's voice is calm, but shakes with a quiet rage. 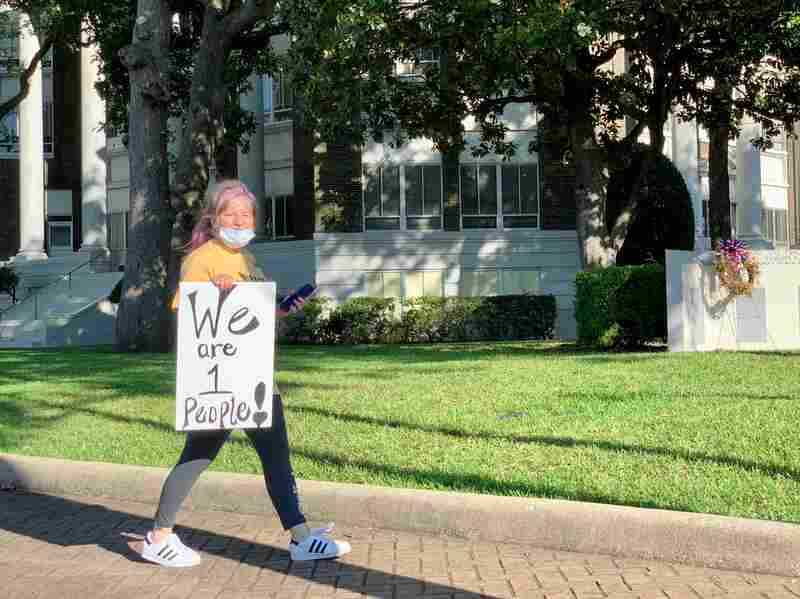 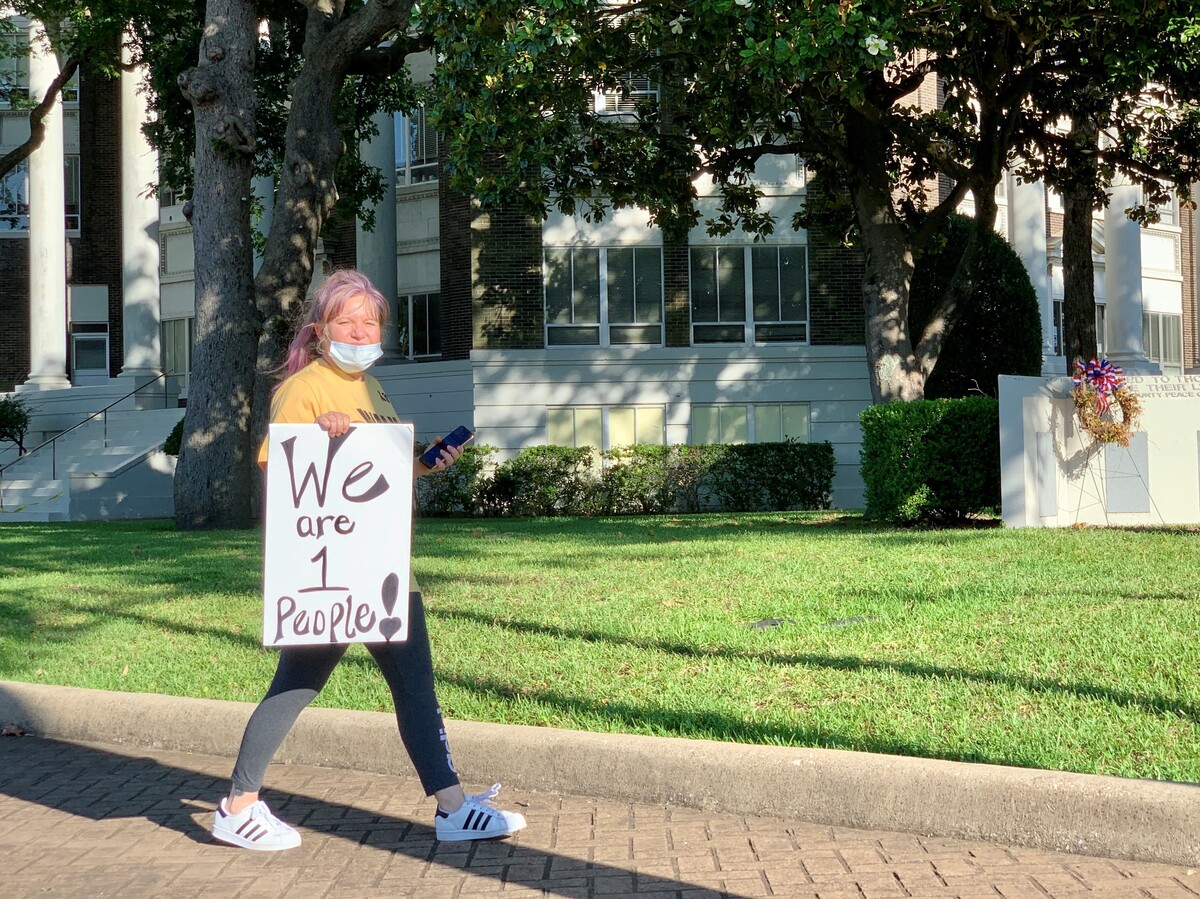 Karen Thomason marches against police violence at the Henderson County Courthouse Square in the East Texas city of Athens. 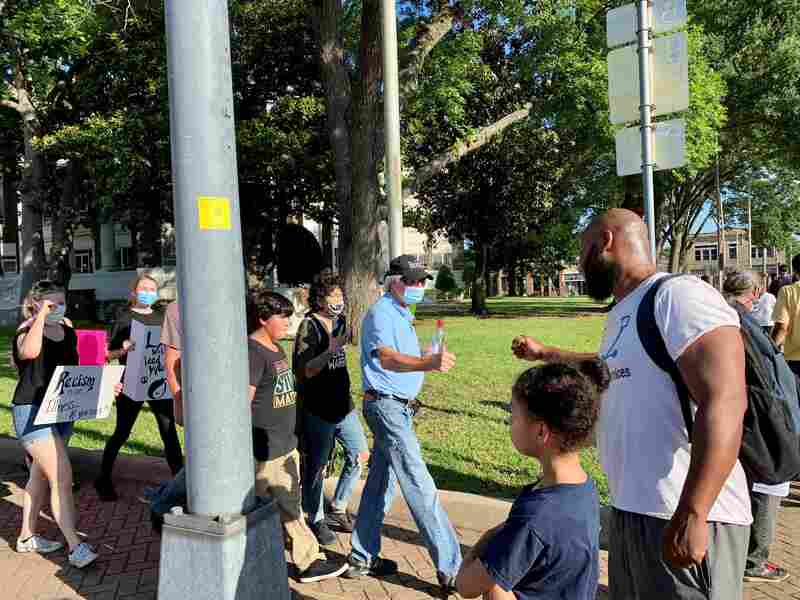 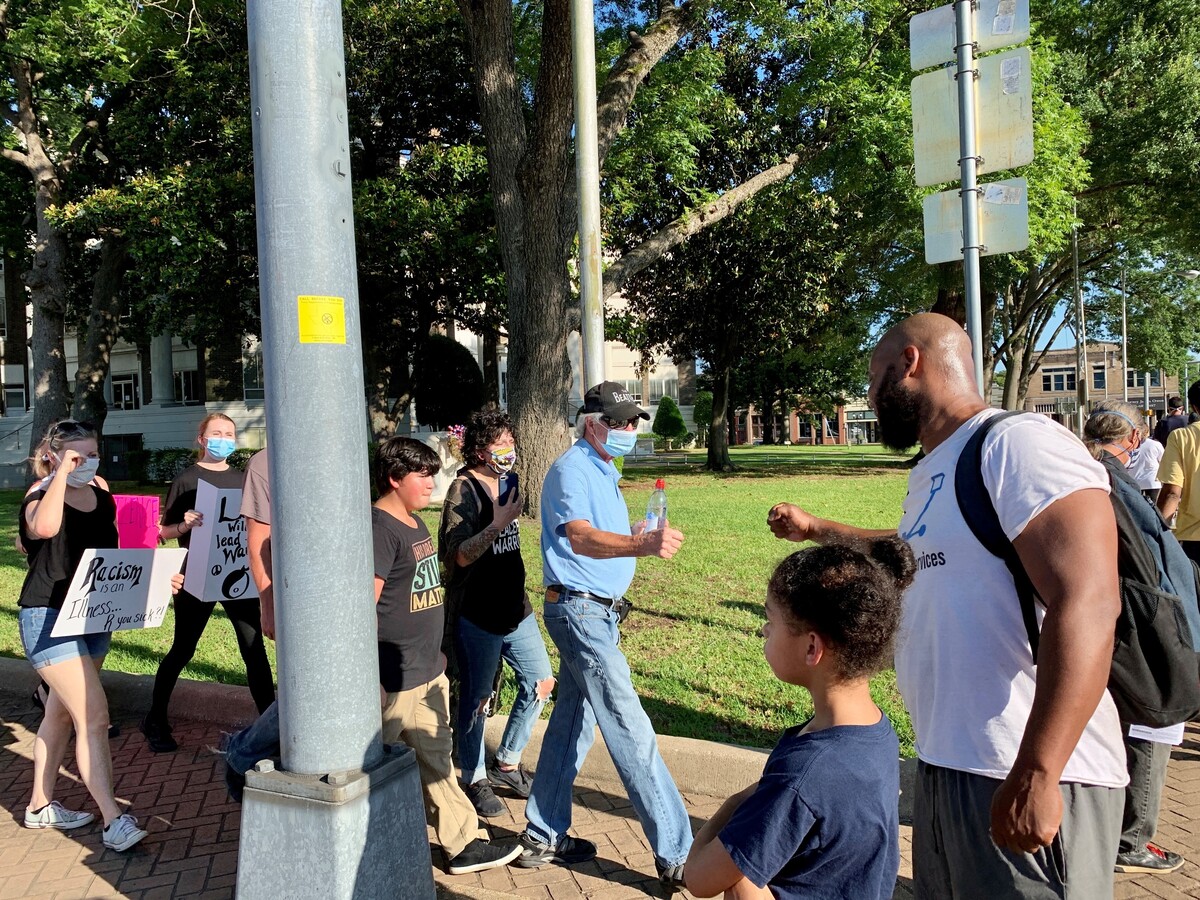 Walter Lundy fist-bumps a protester at the Henderson County courthouse in Athens, Texas.

Multiply Mitchell's story a thousand times, then again by 143 years to the end of Reconstruction and a culture of white supremacy is revealed.

Organizing protests, rallies and marches anywhere is an uphill climb, but in few places is it as hard as it is in East Texas.

In the summer of 1998, in Jasper, Texas, 49 year old James Byrd Jr. was walking home one night when three white men in a pickup, whom he knew, offered to give him a ride home. Instead, they drove Byrd to a clearing in the woods, beat him, then chained him to the truck hitch and dragged him three miles down a dark country road. When they were done, they picked up Byrd's body and left it in front of a nearby African-American church.

The murder was an echo from East Texas history, when lynching black men was the domestic terrorism of its day.

And so the image from Minnesota of a white police officer with his knee upon George Floyd's neck has stirred people to action here in an unprecedented way. From Tyler to Jasper, Athens to Sulphur Springs, thousands of blacks, whites and Hispanics are protesting.

At Twin City Church of Christ in Texarkana, cars were parked recently in rows facing the church like a drive-in movie. On the sidewalk, the choir was under one tent and the pulpit under another. Pastor David Watkins, 33, seamlessly blended the word of God and social justice.

Watkins says in Texarkana, black churches have so far, not gotten involved much with the protests. 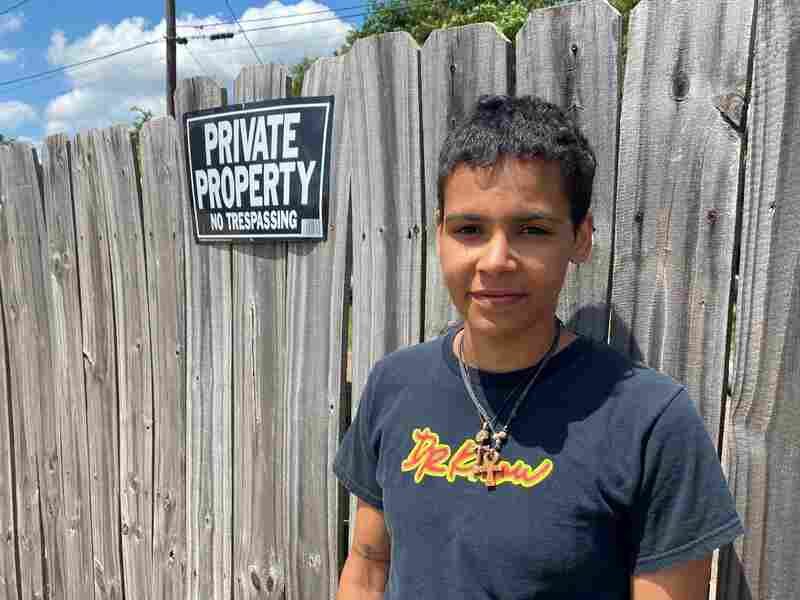 Aylin Sozen is a protest organizer in the city of Texarkana. David Watkins, a pastor in the city, says there is a divide in how older and younger generations in the city approach activism. Wade Goodwyn/NPR hide caption 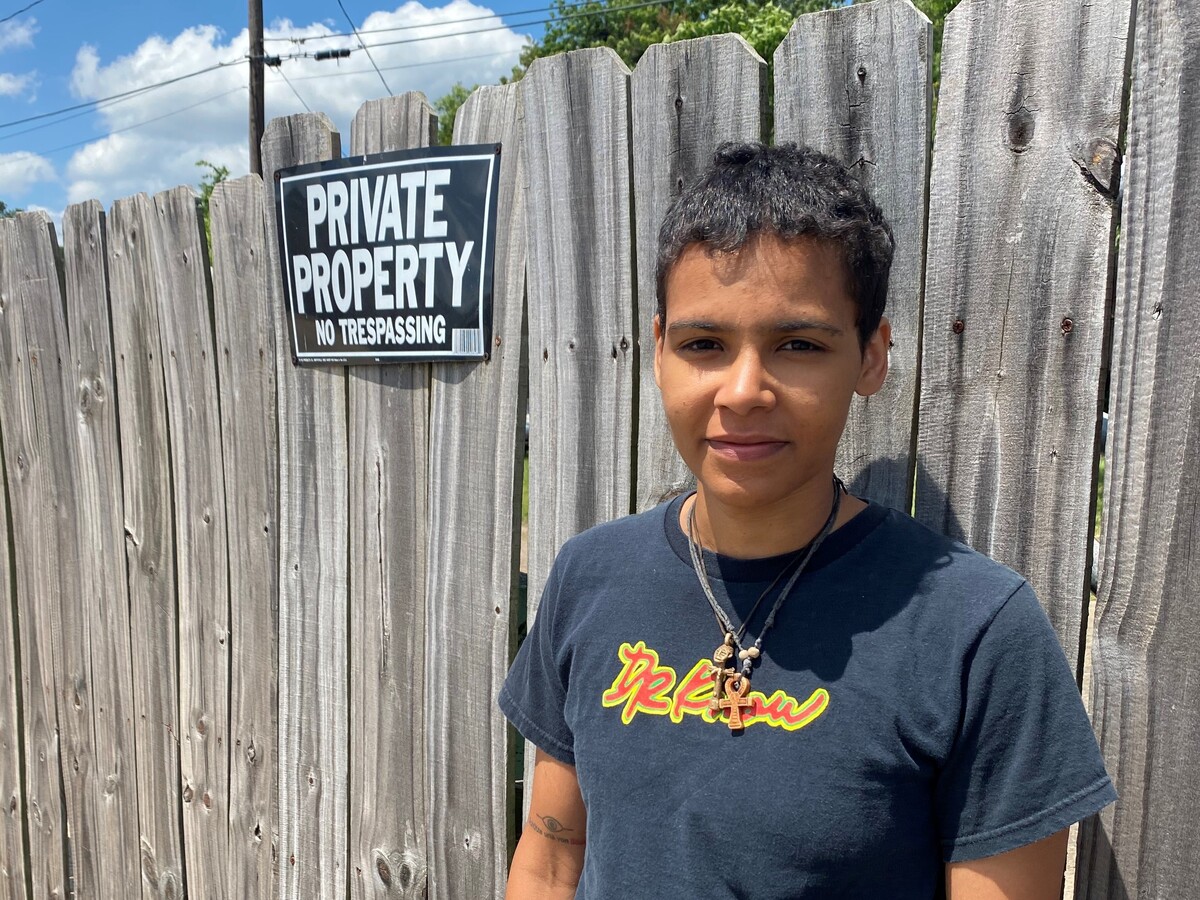 Aylin Sozen is a protest organizer in the city of Texarkana. David Watkins, a pastor in the city, says there is a divide in how older and younger generations in the city approach activism.

Watkins says black pastors and other black leaders here have focused on leveraging their relationships with white politicians and trying to hold them accountable. Watkins also says, in the black church, COVID-19 is a major threat to older congregations, making them wary of protest crowds.

"One of the things that I think many older people feel like," says Watkins, "is that this is a movement now for younger people to take a hold of. And we've already done our job. We've already been through this. And nothing has changed."