Accessibility links
Fired Florida Data Scientist Launches A Coronavirus Dashboard Of Her Own Rebekah Jones says she was fired after refusing to manipulate COVID-19 data. Her new portal is a reflection of how contentious coronavirus data has become amid battles over the states' reopening. 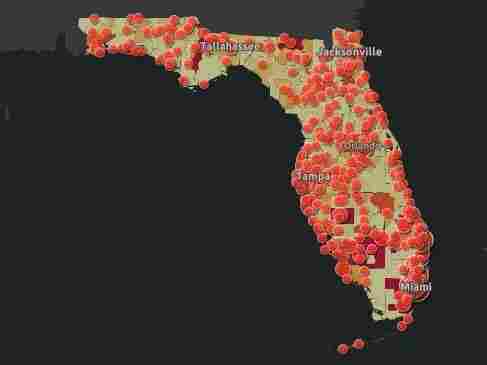 Rebekah Jones says she was fired after she refused to manipulate coronavirus data at the Florida Health Department. Now she has launched her own COVID-19 data portal for the state. Screenshot by NPR/ Florida's Community Coronavirus Dashboard hide caption

Rebekah Jones was fired last month from her job at the Florida Department of Health, where she helped create a data portal about the state's COVID-19 cases. Now, she has created a dashboard of her own.

In some ways, Jones' new portal for Florida coronavirus data looks a lot like the state health department's. But it has a few key differences that reflect just how contentious coronavirus data has become amid politicized arguments about whether it's safe for states to reopen.

Case in point: Jones' dashboard has a map that shows which Florida counties are ready for the next phase of reopening. By her calculations, only two of the state's 67 counties at the moment meet the state's criteria for further easing restrictions.

Jones says she was originally tasked with building essentially the same type of dashboard for the health department's website in her role as a geographic information system manager — until it became clear what the results would show.

"When I went to show them what the report card would say for each county, among other things, they asked me to delete the report card because it showed that no counties, pretty much, were ready for reopening," she says. "And they didn't want to draw attention to that."

Jones says a superior asked her to open up the data and alter the numbers so that the state's coronavirus positivity rating would change from 18% to 10% — and the state would appear to meet its target to reopen.

She says she refused to do that manipulation and others she was asked to, and she was fired on May 18.

"To me, it did not read like some kind of political conspiracy or some higher directive," Jones says. "It seemed like people who expected when I brought in those results, the results to support the plan they had written, and they did not, they seemed panicked, and like they had to figure out a way to make the results match the plan."

Florida entered Phase 1 of its reopening on May 4, in all counties except Miami-Dade, Broward and Palm Beach. It eased restrictions even further with the start of Phase 2 on June 5 but is now among the more than 20 states where new daily cases are rising. As of Sunday, the state has had more than 73,000 cases and nearly 3,000 deaths.

Jones and her attorney are now looking into whether she might be protected by a whistleblower law. Jones says she had asked at work how to file a whistleblower complaint and was fired the next day.

A spokesperson for Florida Gov. Ron De Santis said last month that Jones "exhibited a repeated course of insubordination during her time with the department."

Now a private citizen, Jones continues to take issue with the way the state is calculating its coronavirus positivity rate. The official Florida site says there are more than 1.3 million "total people tested" in Florida, of which about 73,500 were positive, resulting in an "overall percent positive" rate of 5.4%.

But Jones says that figure is misleading.

"I actually wrote the script to create that data, so I know exactly what it looks like," she says, adding that she's audited it and checked it with several other statisticians to make sure it's correct.

Jones says that because many residents, such as health care workers, require repeated testing, the state's dashboard is artificially deflating the true positivity rate.

"They're adding their total test figures instead of their total people, which makes their percent positive extremely low," she says.

But the Florida Department of Health says it's Jones' dashboard that is using unreliable data.

Alberto Moscoso, a spokesman for the Florida Department of Health, said in a statement to NPR that Jones' dashboard "aggregates disparate sets of data without considering many of the important guidelines utilized by epidemiologists to arrive at their conclusions."

The DOH dashboard gets its data from official sources, Moscoco said, including the statewide Merlin and Electronic Surveillance System for the Early Notification of Community-based Epidemics (ESSENCE) tools, as well as official reports from partner state and federal agencies.

Jones and the health department use much of the same underlying state and county data for case numbers and details. But some of the data on Jones' dashboard, Moscoso says, "is either self-reported or derived from unofficial sources."

"The Department's goal has always been to provide accurate, confirmed information regarding COVID-19 in Florida in as expeditious a manner as is possible. We will continue to employ only official sources of information, ensuring that our online resources are the most factual and up-to-date available," he says.

The health department did not explain how it calculates its "total people tested" figure.

Cindy Prins, a professor of epidemiology at the University of Florida, finds Jones' dashboard to be more comprehensive than the state's.

"There's some data on there that either wasn't on the Florida COVID-19 DOH dashboard or was available and maybe wasn't presented in the same way that it's being presented now ... You're just getting a bigger picture of what's going on," Prins says.

She also notes that the state's site doesn't appear to use the "total people tested" label accurately.

"From a definition standpoint, 'total people tested' and what it actually represents is 'total number of tests conducted.' Those are two different measures," says Prins, explaining that she has been tested — but if she were tested again, she shouldn't be counted as a separate person. She's just a person who has been tested twice.

The state has faced other questions over its handling of coronavirus data. The Miami Herald reported last week that Florida refused for weeks to release data on COVID-19 deaths at nursing homes and assisted living facilities, even as many other states did so.

"[The state health department]'s public data are incomplete, sometimes changed without explanation, and have had information removed following questions from reporters," the Herald reports.

Prins says the public interest in COVID-19 data is an indication that amid the ongoing pandemic, many people are interested in seeing the numbers for themselves.

They get a visual of what's going on from both dashboards, she says: They can see the numbers and what's happening in their own county. "I do think that people have found some value in that where before, they might not have really looked to that sort of source."

Natalie Dean is a professor of biostatistics at the University of Florida and a member of the advisory board of the COVID Tracking Project, a volunteer data collection effort launched by The Atlantic. She says it's useful that Jones' dashboard connects people directly to information about testing and health care, and does"not just show them the data, but to help people make decisions."

And Dean says it's valuable that Jones makes it easy to export the data she's using. "A lot of people are making their own models," she says. "As someone who does this, it's really helpful to make that data more accessible."

With Jones now out of a job, her site is relying on GoFundMe donations to stay running. Her goal is to give people a place with information they can trust and find help if they need it.

"I think I'm uniquely equipped to try to help with that," she says, "so that's what I'm doing. I just don't want people to panic. I don't want anybody to feel afraid or powerless."