Accessibility links
In 'Exercise Of Power' Robert Gates Says Presidents Too Often Rely On The Military In his latest book, the former defense secretary says some matters more often than not call for other elements of American power: diplomacy or foreign aid or clear strategic communications. 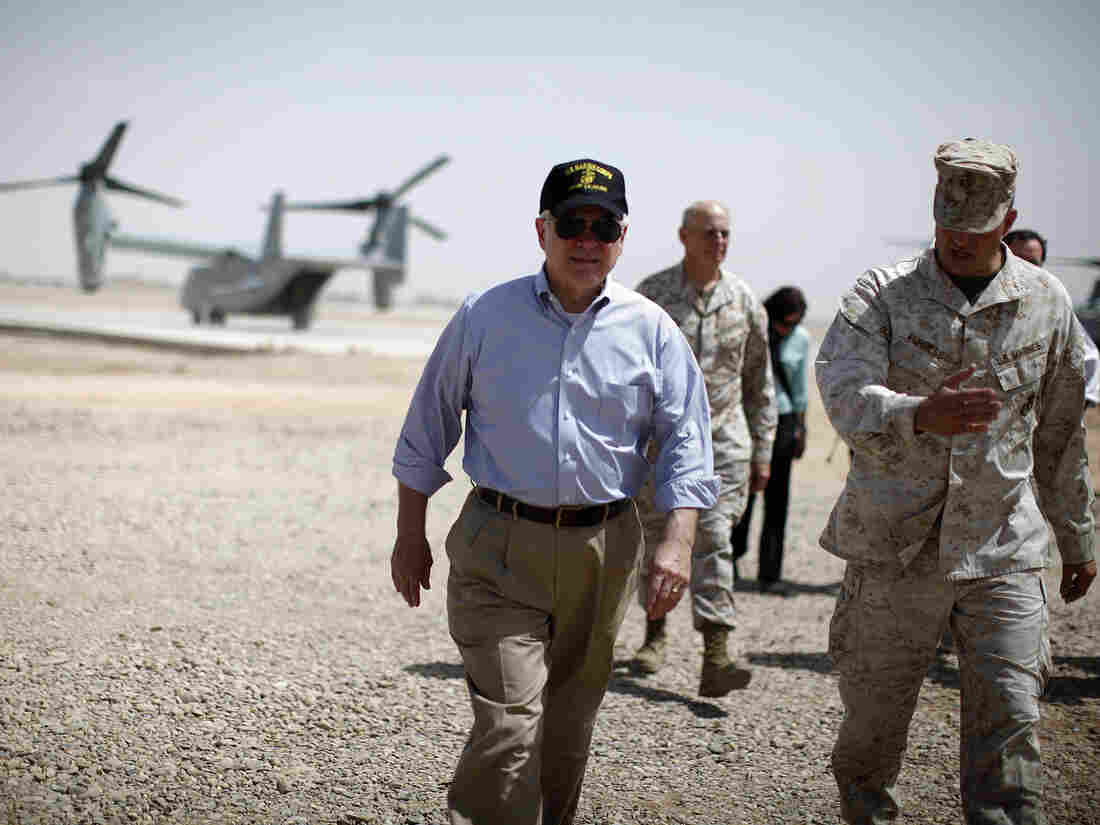 Then U.S. Secretary of Defense Robert Gates walks from an Osprey aircraft after landing at Forward Operating Base Dwyer on June 5, 2011 in Kandahar province, Afghanistan. Pool/Getty Images hide caption 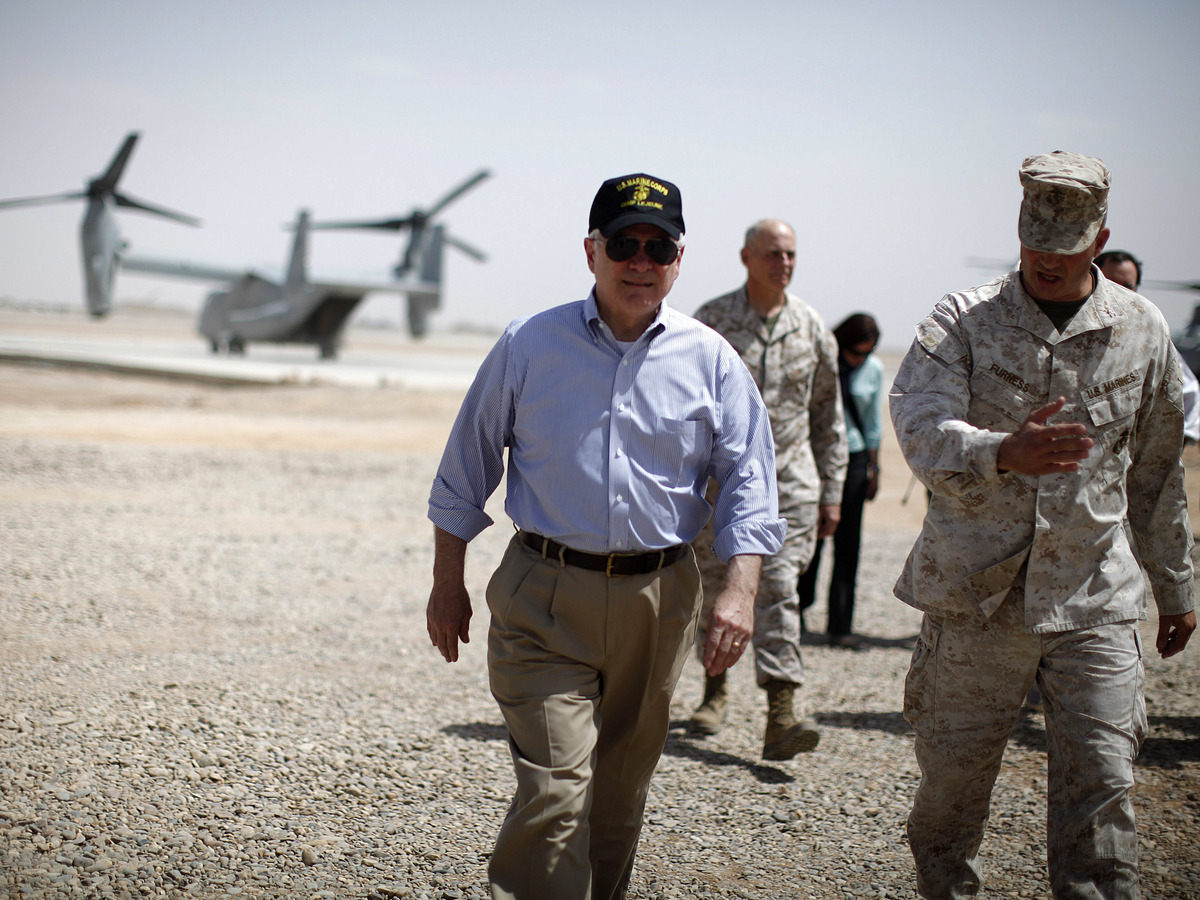 Then U.S. Secretary of Defense Robert Gates walks from an Osprey aircraft after landing at Forward Operating Base Dwyer on June 5, 2011 in Kandahar province, Afghanistan.

When he was defense secretary, Robert Gates would often say there are more people in military bands than in the State Department's Foreign Service. The Pentagon could always get funding, while State was often cut in the budget process.

Now Gates has expanded on that theme in his latest book — Exercise of Power: American Failures, Successes, and a New Path Forward in the Post-Cold War World -- which says presidents too often rely on the military for matters that more often than not call for other elements of American power: diplomacy or foreign aid or clear strategic communications. 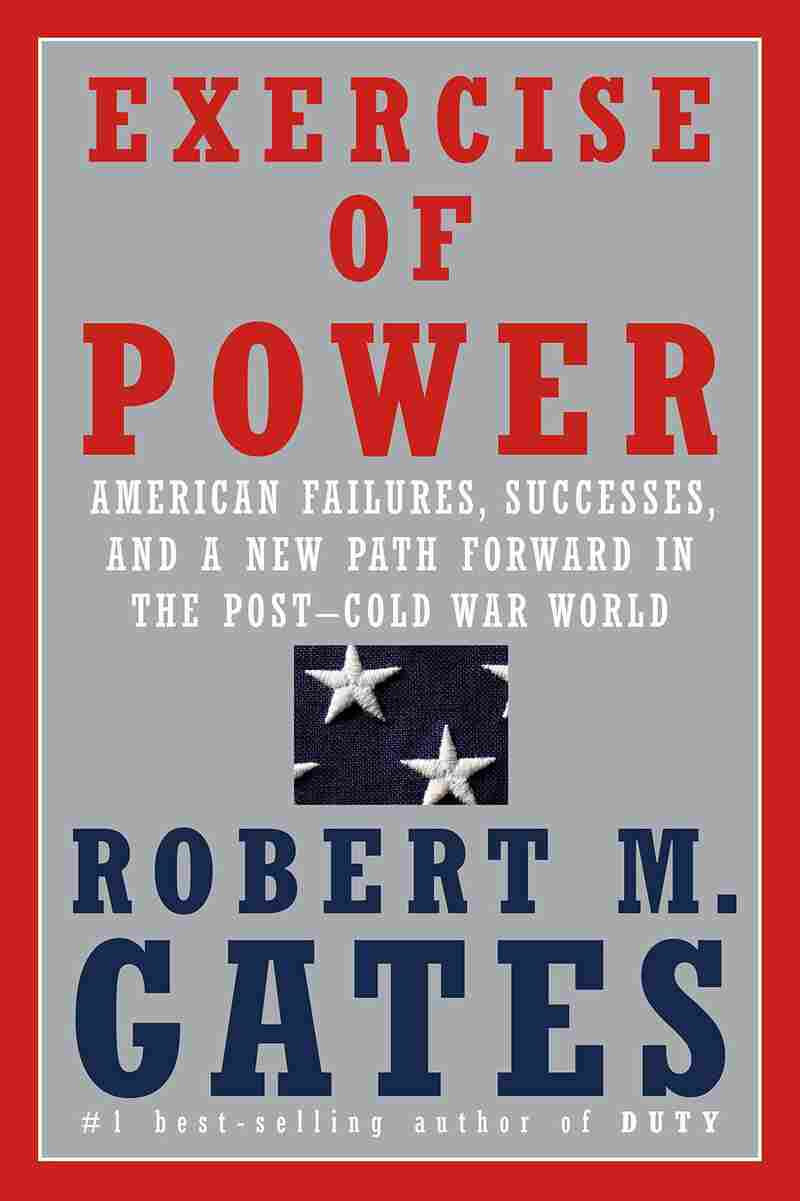 But all these other elements of power are woefully underfunded or ineptly handled — or both.

Gates comes from the old-line Republican camp, working for Presidents Ronald Reagan and George H.W. Bush, both of whom he praises as wielding all the elements of American power "with extraordinary skill" — Reagan for using covert action, economic pressure and clear messaging to help "push the Soviets over the edge," and the first Bush for managing the end of the Cold War and for limited objectives in the first Gulf War.

Gates — who wrote also Duty, probably the best and most unvarnished Washington memoir — oversaw both the Iraq and Afghan wars from 2006 through 2011 and help shepherd the "surge" in troops in both countries.

Now he looks back and wonders if success was possible at all — outside of a limited mission to remove Saddam Hussein and the Taliban from power. Creating democracies in either country was perhaps too ambitious, as his predecessor Donald Rumsfeld argued forcefully behind the scenes.

Rumsfeld insisted the U.S. had no obligation to bring democracy to Iraq, Gates writes, and if "a strongman emerged so be it. Had I been secretary at the time I believe I would have made those same points."

On Afghanistan, where Gates pressed the Obama administration to send tens of thousands more troops, he has come to realize that not much was achieved — given the lack of Afghan governance, corruption, Taliban safe havens in Pakistan and a disjointed U.S. government civilian effort.

"For all our good intentions," Gates writes, "the American experience in Afghanistan has not been markedly different from that of the foreigners who preceded us" like Great Britain and Russia.

And this stunning admission: "I believe we — and the Afghans — would have been better served had our military departed in 2002 and had thereafter relied on non-military instruments of national power."

Imagine being the parent or friend of a soldier or Marine killed or maimed in the subsequent 18 years of war.

Gates is right that the State Department is both woefully underfunded and also lacking experts who can help in places like Afghanistan. Too many stayed inside the U.S. Embassy in Kabul, checking the box on a "hardship" post, swimming in the pool, enjoying a buffet lunch while pontificating on Afghan politics. I saw this with my own eyes.

What State needs is more people like Carter Malkasian and Kael Weston, two intrepid State officials who risked their lives by going out with Marines and meeting local Afghan leaders, and trying to make a difference — for years.

State does need an overhaul and more funding. But let's face it: State really has no constituency, unlike the Pentagon, which is rolling in money because lawmakers want to bring jobs back to their states.

Gates bemoans the loss of USIA (United States Information Agency) due to budget cuts in the late 1990s, which was key in opening libraries and cultural centers around the world and also bringing students to the U.S. for study. But can an exchange of young people from, let's say, Egypt, counter American support for repression?

Gates writes that Congress bears a "heavy responsibility" for weakening America's non-military instruments of power for more than three decades, not only for eliminating USIA but also drastically cutting the U.S. Agency for International Development.

He does have some bright spots. Colombia is one. The U.S. worked closely with that government in training its military and working all elements of power to develop a program called Plan Colombia which pulled the country back from being a "failed state."

Gates says the U.S. must be hardheaded about what it's using its military for, whether the mission is in the national interest, has support of the Congress and the American people, and a foreign government.

The U.S. will always be tugged between the idealism of a Woodrow Wilson (making the world "safe for democracy") and the skepticism of John Quincy Adams who warned about seeking "monsters to destroy."

For Gates, he concludes that America must stand for something more than "our military success and our economic success." He takes a jab at President Trump, pointing out that many Americans are uncomfortable with an American president cozying up to autocrats, "siding with them on issues while deriding governments institutions. We must work with these leaders but we don't need to say we love them."

The views of both Wilson and Adams must co-exist, Gates believes.

"We must not be the world's policemen," he writes. "But we must also use every nonmilitary instrument of power we possess to promote freedom and encourage reforms, with friends as well as rivals, because those objectives serve our national interest."

Tom Bowman has covered the Pentagon for NPR since 2006, and before that for The Baltimore Sun. He has made numerous trips to Iraq, Afghanistan and Syria, usually embedding with U.S. and local troops for month-long visits.