Accessibility links
Politics, Protests, Coronavirus: 5 Things To Watch This Week After nearly three weeks of protests, several police departments have already moved to make reforms, but when it comes to sweeping national change, it's not clear how far Washington will go. 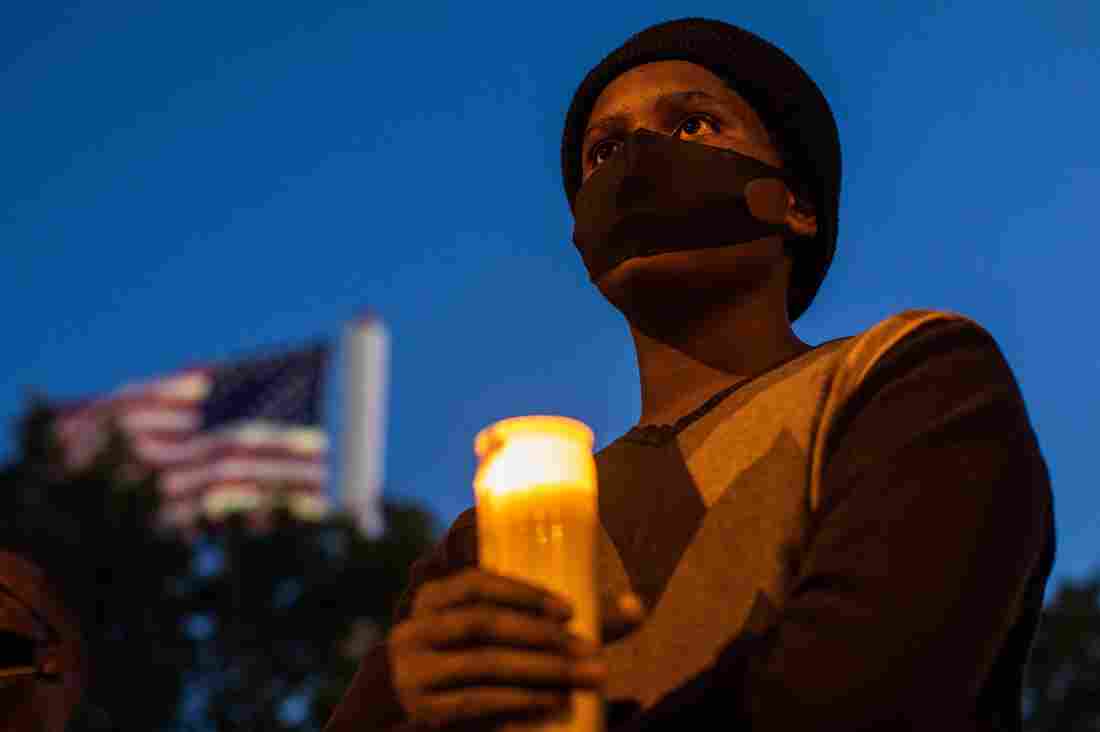 A man holds a candle during a vigil around a makeshift memorial at the tree where Robert Fuller was found dead hanging from a rope in Palmdale, Calif. Officials deemed Fuller's death a suicide, but his family wants an independent investigation. Apu Gomes/AFP via Getty Images hide caption 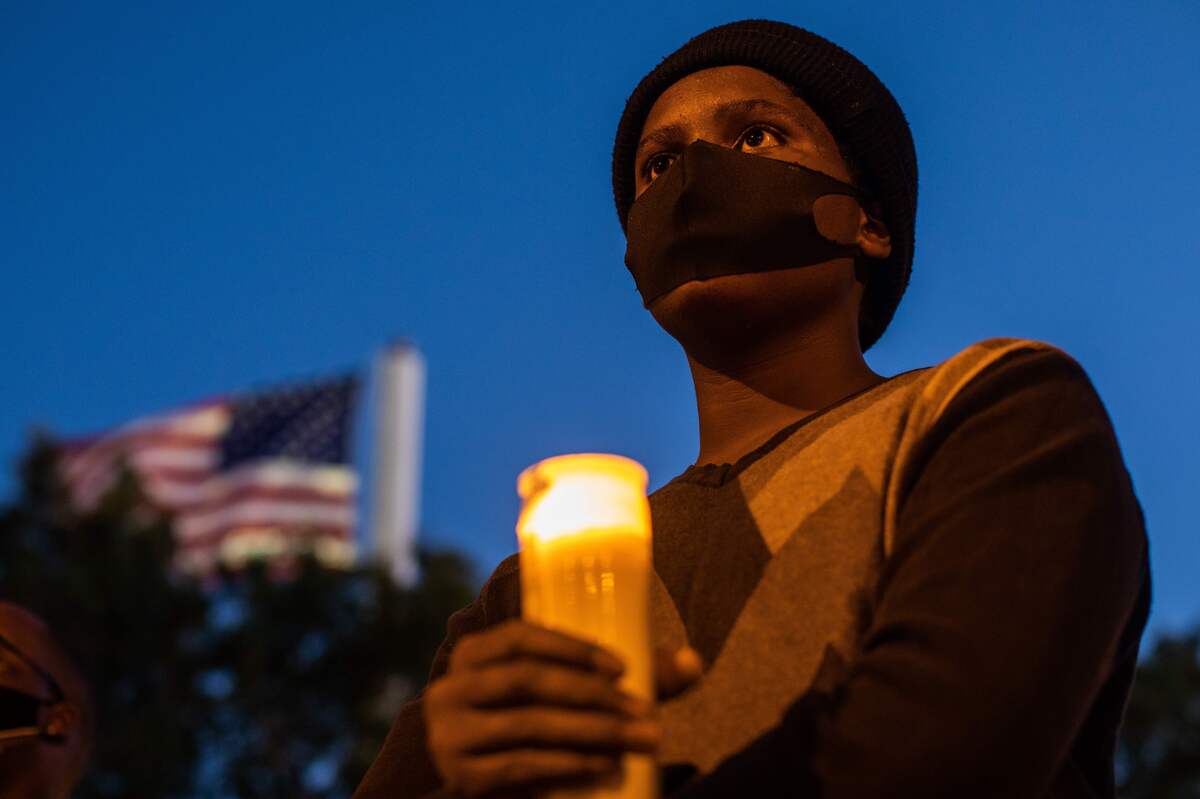 A man holds a candle during a vigil around a makeshift memorial at the tree where Robert Fuller was found dead hanging from a rope in Palmdale, Calif. Officials deemed Fuller's death a suicide, but his family wants an independent investigation.

After almost three weeks of demonstrations following the death of George Floyd while in Minneapolis police custody, America seems to be at a threshold moment.

Polling shows attitudes shifting more in favor of protesters and embracing the potential for change when it comes to how policing is done in this country.

Will This Be The Moment Of Reckoning On Race That Lasts?

Police departments in at least half a dozen states have already moved to make reforms, but when it comes to sweeping national change, it's not clear how far Washington will go.

Many protesters have made "Defund The Police" a rallying cry, but most Democrats on Capitol Hill — and the party's presumptive presidential nominee, Joe Biden — have stayed away from that language.

Instead, House Democrats introduced a bill that would, among its provisions:

A Reuters/Ipsos poll of U.S. adults, conducted last week, found broad support for a lot of those items:

(The survey did not ask about no-knock warrants or lynching.)

Republicans, who are holding a Senate Judiciary Committee hearing Tuesday on police reform, are set to release their own legislation this week. The effort is led by Sen. Tim Scott of South Carolina, the only black Republican in the U.S. Senate.

Scott talked about some of those sticking-point legislative items on two Sunday political shows:

Scott has said his bill would include making lynching a federal hate crime, and he wants to establish a commission on effective policies that lead to better outcomes that includes former and current police officers and civilians.

I've been working on police reform legislation for years. Now is the time to pass a solution. The #JUSTICEAct addresses officer misconduct, brings improved training and tactics, and collects critical information on incidents relating to bodily injury and death. pic.twitter.com/j4EotrqiBV

It's unclear what legislation President Trump would sign. At a roundtable on law enforcement last week in Dallas, Trump said he'd sign an executive order that would "encourage police departments nationwide to meet the most current professional standards for the use of force, including tactics for deescalation."

But he fumbled over whether he would be in favor of banning chokeholds. During a Fox News interview in which he claimed to have "done more for the black community than any other president" except maybe Abraham Lincoln, he said he doesn't like chokeholds.

"Generally speaking, they should be ended," Trump said.

But then he indicated that he doesn't really want to limit the police: "You get somebody in a chokehold, and what are you going to do now? Let go and say, 'Oh, let's start all over again. I'm not allowed to have you in a chokehold'?"

5 things to watch this week

1. Trump on race: Trump's first campaign rally since the coronavirus pandemic was supposed to take place in Tulsa, Okla., on Friday — which is Juneteenth, the holiday commemorating the effective end of slavery in the U.S. Trump first defended the selection of the date of the rally, saying he didn't do it on purpose, but that it should be seen as a "celebration." After being pressured, he moved it to Saturday.

Trump has fumbled the issue of race repeatedly, and it's not going away any time soon. When Trump, who has largely stuck to a "law and order" hard line, releases that promised executive order on police reform, how will that be received?

2. Confederate statues and base names: Speaking of Trump and race, he's largely been out there on his own defending Confederate statues that are still standing, as well as military bases named for confederates. A Morning Consult poll last week found that 44% of voters are in favor of letting the statues remain standing, but that's down from 52% in 2017. Just 32% say they should be taken down, up from 26% in 2017, so the trend is clear. But 71% of Republicans think the statues should remain standing, which has been the group Trump has catered to since taking office.

Congress Heads Toward Clash With Trump Over Removal Of Confederate Symbols

The danger sign for this president is that independents have shifted from 51% in favor of them remaining standing to just 40% now in the poll. And after Trump said there were good people on both sides after Charlottesville, his approval dropped to the lowest of his presidency — and he's seen a similar, if not as steep, decline now.

3. Senate Judiciary Committee hearing: The committee, led by Chair Lindsey Graham, R-S.C., holds its "Police Use of Force and Community Relations" hearing Tuesday at 2:30 p.m. ET. The witness list isn't clear yet, but Democrats penned letters to Graham requesting Attorney General William Barr testify, given his role in the forcible removal of protesters outside the White House before Trump took a walk and photo with a Bible at a nearby damaged church.

4. What about COVID-19? More than 115,000 people are confirmed to have died from the coronavirus in the U.S., and more than 2 million people have contracted it. And now some two dozen states are seeing spikes, especially in the South and West.

"I would hope to get to some degree of real normality within a year or so, but I don't think it's this winter or fall," Dr. Anthony Fauci, head of the National Institute of Allergy and Infectious Diseases, told The Telegraph Sunday. And yet, every state in the country has loosened restrictions, and the Trump campaign is going ahead with a rally in a 19,000-seat arena.

Trump and his campaign have downplayed the seriousness of the continuing pandemic and yet appended this disclaimer for those attending the rally: "By attending the Rally, you and any guests voluntarily assume all risks related to exposure to COVID-19 and agree not to hold Donald J. Trump for President, Inc.; BOK Center; ASM Global; or any of their affiliates, directors, officers, employees, agents, contractors, or volunteers liable for any illness or injury."

5. Watching the Supreme Court: The court will issue opinions on both Monday and Thursday, and it's possible the justices will release decisions in a high-profile LGBTQ employment discrimination case, as well as on Deferred Action for Childhood Arrivals, or DACA. When the DACA case was argued in the fall, the court's conservative majority appeared ready to go along with the Trump administration's argument that it acted lawfully in shutting down the program. The program was enacted by former President Barack Obama by executive order. The court may also take up cases involving the Second Amendment and qualified immunity.

"All the presidents I've worked for liked to use the military as a prop. I think this president's probably taken that to a new level, but the military has to be very sensitive about being exploited in that way."

Last week, several current and former military officials rebuked Trump for his photo op walk to a church. The Joint Chiefs of Staff chairman, Gen. Mark Milley, apologized for his role in it after a backlash from troops. "I should not have been there," he said. "My presence in that moment and in that environment created a perception of the military involved in domestic politics." (Hear more from Gates on NPR here.)