Accessibility links
Supreme Court Sides With Pipeline In Appalachian Trail Fight At the heart of the case was a legal question about which federal agency — if any — had authority to grant a permit for the pipeline, which would cross under the trail in central Virginia. 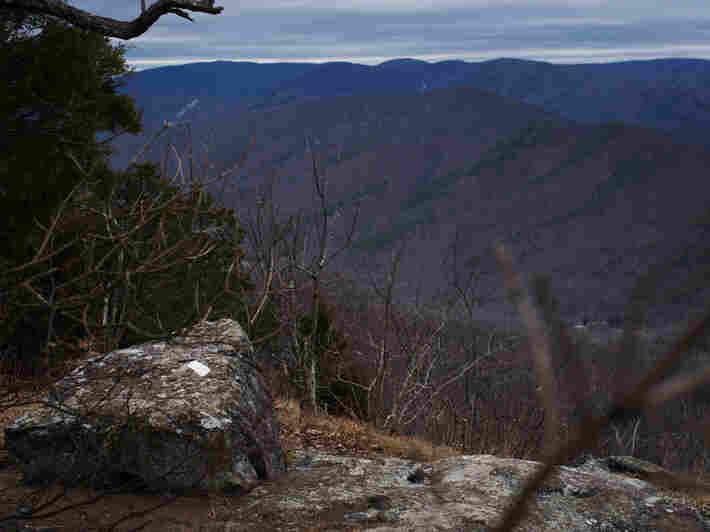 Looking west from this overlook in the George Washington National Forest in central Virginia, the pathway of the Atlantic Coast Pipeline would be visible along the valley floor running to the north. Becky Sullivan/NPR hide caption 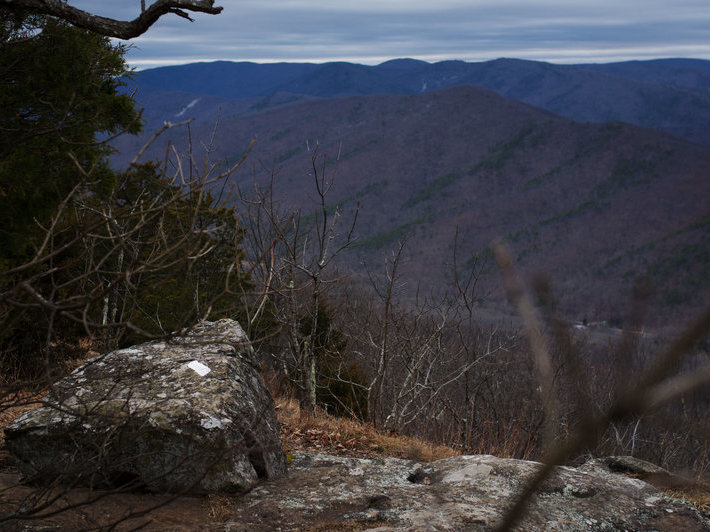 Looking west from this overlook in the George Washington National Forest in central Virginia, the pathway of the Atlantic Coast Pipeline would be visible along the valley floor running to the north.

The Supreme Court ruled Monday in favor of a pipeline company in a dispute about whether a new 600-mile natural gas pipeline could cross underneath the Appalachian Trail on federal land.

The 7-2 decision overturned one part of a lower court decision that had blocked construction of the Atlantic Coast Pipeline, which is being jointly developed by Duke Energy and Dominion Energy.

The proposed pipeline would run from West Virginia to population centers in Virginia and North Carolina. In central Virginia, the pipeline would cross hundreds of feet underground beneath the Appalachian Trail where the trail runs through the George Washington National Forest.

At the heart of the case was a technical legal question about which federal agency, if any, had the authority to grant the permit for the pipeline.

The U.S. Forest Service granted the permit to the pipeline company in 2018 because that agency administers the national forest where the pipeline would cross the trail.

But environmental groups argued that the Forest Service didn't have the authority to issue the permit. Led by the Southern Environmental Law Center, they said that because the Appalachian Trail is a "unit" of the National Park System, rules that govern National Park lands should apply instead. In December 2018, the Fourth Circuit Court of Appeals sided with the environmental groups and vacated the Forest Service permit. The pipeline company appealed.

Arguments before the Supreme Court in February centered on the interpretation of certain words in various decades-old federal laws. Arguing on behalf of the pipeline company, Anthony Yang, a lawyer for the federal government, sought to disentangle the trail from the land beneath it, so that the pipeline could proceed under the permit granted by the Forest Service.

Chief Justice John Roberts expressed concern during those arguments about the practical consequences of a ruling in favor of the environmental groups. Because a century-old law forbids the Park Service from granting energy permits across National Park lands, such a ruling could have had the effect of disallowing new pipelines across any federal land where the Appalachian Trail runs, potentially imposing a major obstacle to pipeline development in the eastern U.S.

In overturning the Fourth Circuit's decision, the Supreme Court concluded, 7-2, that the Forest Service did have legal authority to grant the permit. The court compared the situation to a landowner granting a right-of-way or easement to a neighbor. 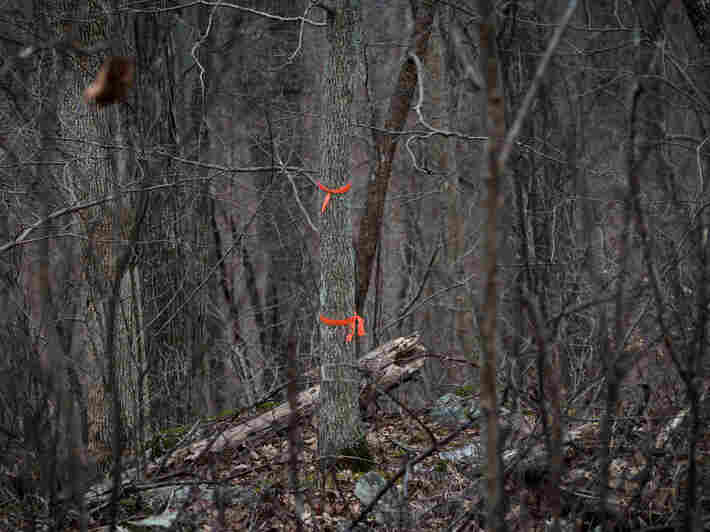 Orange flags near the trail, seen here in February, mark the approximate crossing location of the pipeline that would be tunneled hundreds of feet below ground. Becky Sullivan/NPR hide caption 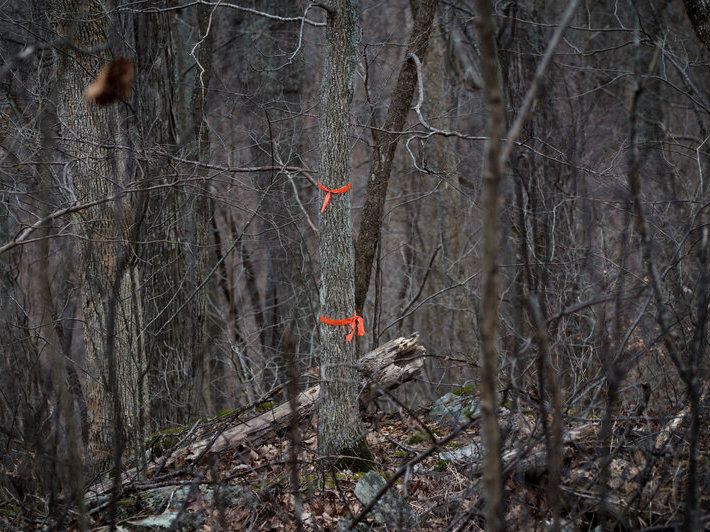 Orange flags near the trail, seen here in February, mark the approximate crossing location of the pipeline that would be tunneled hundreds of feet below ground.

"If a rancher granted a neighbor an easement across his land for a horse trail, no one would think that the rancher had conveyed ownership over that land," wrote Justice Clarence Thomas on behalf of the majority. In effect, the court ruled, the Forest Service had simply granted a right-of-way to the Park Service to maintain the trail in the national forest, meaning Forest Service rules apply.

"Sometimes a complicated regulatory scheme may cause us to miss the forest for the trees, but at bottom, these cases boil down to a simple proposition: A trail is a trail, and land is land," Thomas wrote, concluding that the trail is distinct from the land on which it runs.

The pipeline company says the project will deliver lower-cost natural gas to utilities in the region and create thousands of new jobs. The majority opinion noted that the company plans to drill the pipeline hundreds of feet underground, with entry and exit sites far from the trail. A clear-cut path for the pipeline would be visible in the distance, and there are other environmental concerns associated with the pipeline.

The company called the ruling "a major victory" and says it is working to secure the other permits required. Dominion Energy said the court's decision "upheld the longstanding precedent allowing infrastructure crossings of the Appalachian Trail. For decades, more than 50 other pipelines have safely crossed the Trail without disturbing its public use. The Atlantic Coast Pipeline will be no different."

The Southern Environmental Law Center expressed disappointment with the decision, and said that many problems with the pipeline remain.

"This is not a viable project," SELC Program Director DJ Gerken said in a statement. "It is still missing many required authorizations, including the Forest Service permit at issue in today's case, and the D.C. Circuit Court of Appeals will soon consider the mounting evidence that we never needed this pipeline to supply power. It's time for these developers to move on and reinvest the billions of dollars planned for this boondoggle into the renewable energy that Virginia and North Carolina customers want and deserve."

The Atlantic Coast Pipeline still faces other obstacles to its construction. The Fourth Circuit Court of Appeals revoked the Forest Service permit on four different grounds, only one of which was appealed to the Supreme Court. With the Appalachian Trail question now resolved, the three other issues still remain. The pipeline is also still awaiting a number of permits from other agencies.

"It's been six years since this pipeline was proposed, we didn't need it then and we certainly don't need it now," said Dick Brooks of the Cowpasture River Preservation, a conservation organization in the region. "Today's decision doesn't change the fact that Dominion chose a risky route through protected federal lands, steep mountains, and vulnerable communities."

A ruling in favor of the environmentalists could have resulted in the disruption of the "cooperative management system" relied on by groups that work to maintain the trail, as NPR reported earlier this year. The Appalachian Trail Conservancy, the main organization charged with day-to-day administration of the trail, officially neither supported nor opposed the pipeline. In a statement, the group announced that the Supreme Court's ruling would keep the system in place.