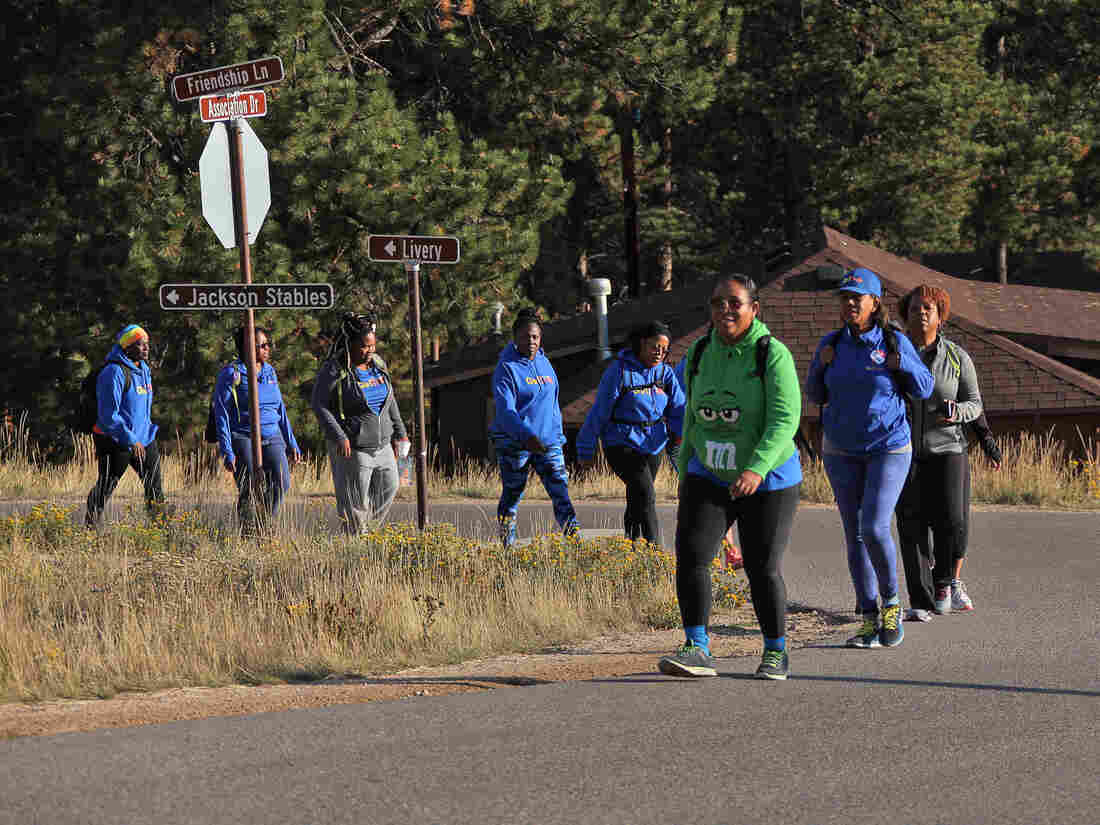 In 2018, GirlTrek members gathered for a weekend retreat in Rocky Mountain National Park as part of their #StressProtest. GirlTrek hide caption 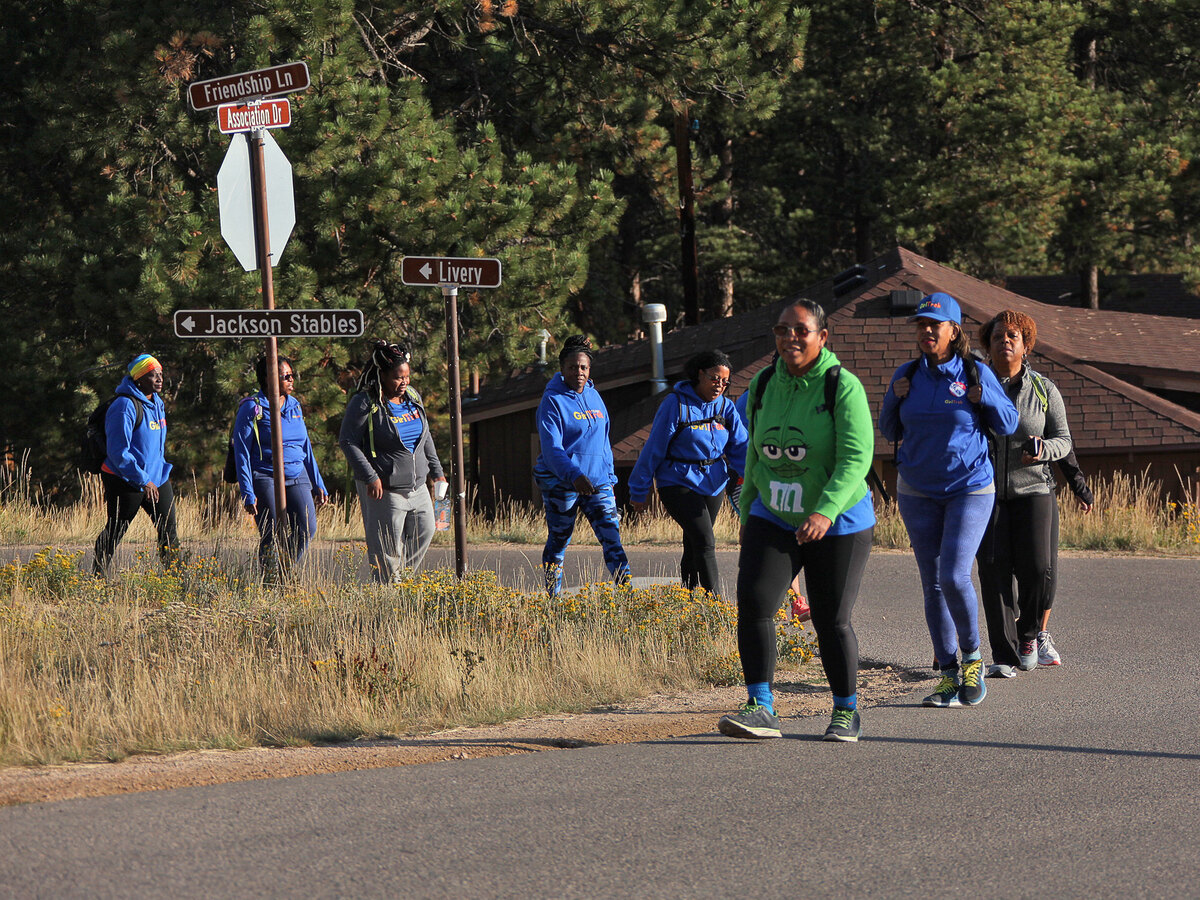 In 2018, GirlTrek members gathered for a weekend retreat in Rocky Mountain National Park as part of their #StressProtest.

Before Philadelphia's stay-at-home order went into effect in March, Iresha Picot walked in parks and neighborhoods all over the city, often meeting up with black women of all ages. Even though she's been careful to follow social distancing guidelines, Picot says she's still able to connect with a community nearly 750,000 strong.

"You have a community out there who are willing to hold you and hold space for you," she says.

That community is GirlTrek, a nonprofit organization dedicated to the health and healing of black women and girls. Black women experience higher rates of diseases such as hypertension and diabetes, and suffer from the stressors of systemic racism.

Walking can add years to their lives, but GirlTrek co-founders Vanessa Garrison and T. Morgan Dixon emphasize that it's only one component of a holistic approach. When they founded the organization a decade ago, Dixon says they looked to black women's history, discovering that, "when women walked and talked together, everything changed."

GirlTrek members have organized walk teams in hundreds of cities and towns, mobilizing to reclaim their health while reestablishing walking as a healing tradition. They've followed the steps of foremothers who walked for survival and liberation, retracing Harriet Tubman's 100-mile journey to freedom, the routes walked by women during the bus boycotts of the 1950s, and the historic 54-mile civil rights walk from Selma to Montgomery.

Inspired by intergenerational conversations with civil rights legends such as Angela Davis and Nikki Giovanni, this month GirlTrek launched its first Black History Bootcamp, a 21-day series of walking meditations to honor freedom fighters such as Sojourner Truth, Shirley Chisholm and Nina Simone as well as less often celebrated women, including Georgia Gilmore, whose secret kitchen helped feed and fund the civil rights movement, Olive Morris, who fought for fair housing rights in the U.K., and the pioneering transgender activist Marsha P. Johnson. 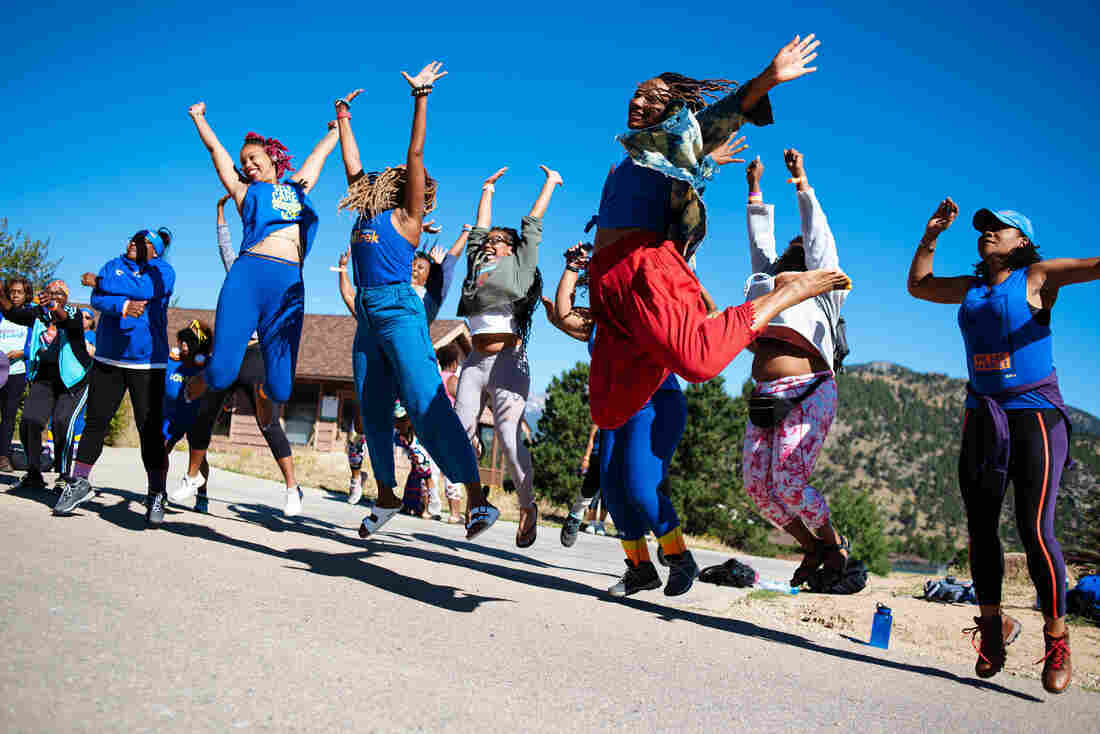 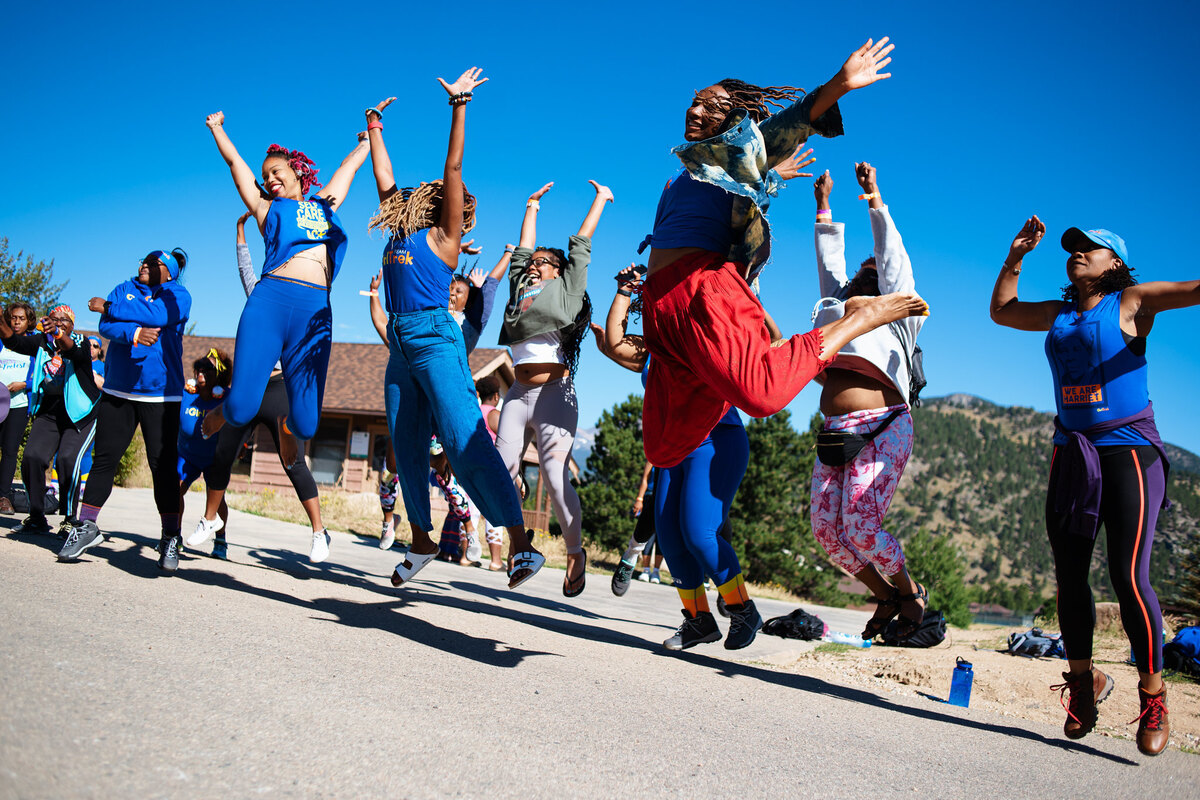 Each week day participants who sign up through GirlTrek's website receive an email with a profile of one of these women, along with related readings, playlists, meditation prompts and a phone number. As they take 30-minute daily walks, they can call into a live, unfiltered conversation led by Garrison and Dixon.

On these calls, Garrison and Dixon often share their own struggles and triumphs, and address current issues such as the coronavirus pandemic, voter suppression and police violence. They opened a recent tribute to Toni Morrison with a celebration of the life of Breonna Taylor, on what would have been Taylor's 27th birthday.

Garrison says word of mouth has always been key to GirlTrek's growth as a movement. As women tell their friends and family about Black History Bootcamp, and share their testimonies over social media, she says participation has already grown to nearly 95,000 registrations. 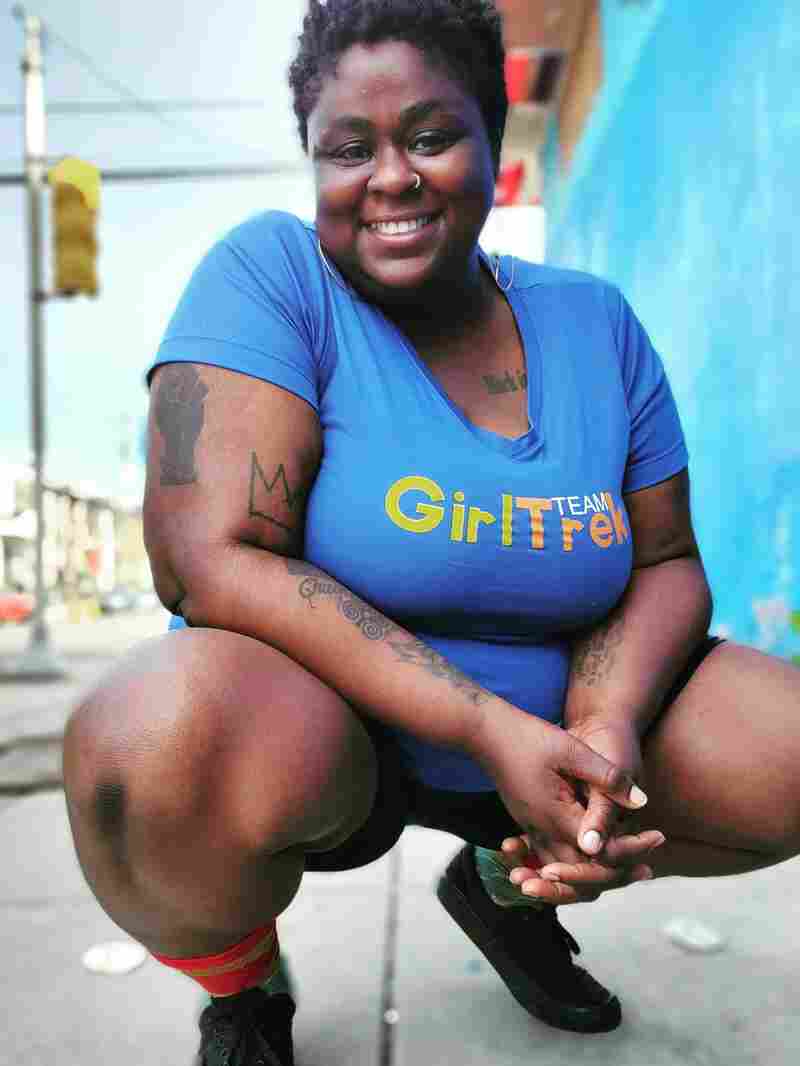 Iresha Picot has lost 130 pounds since she joined GirlTrek four years ago. The nonprofit organization is dedicated to the health and healing of black women and girls. Iresha Picot hide caption 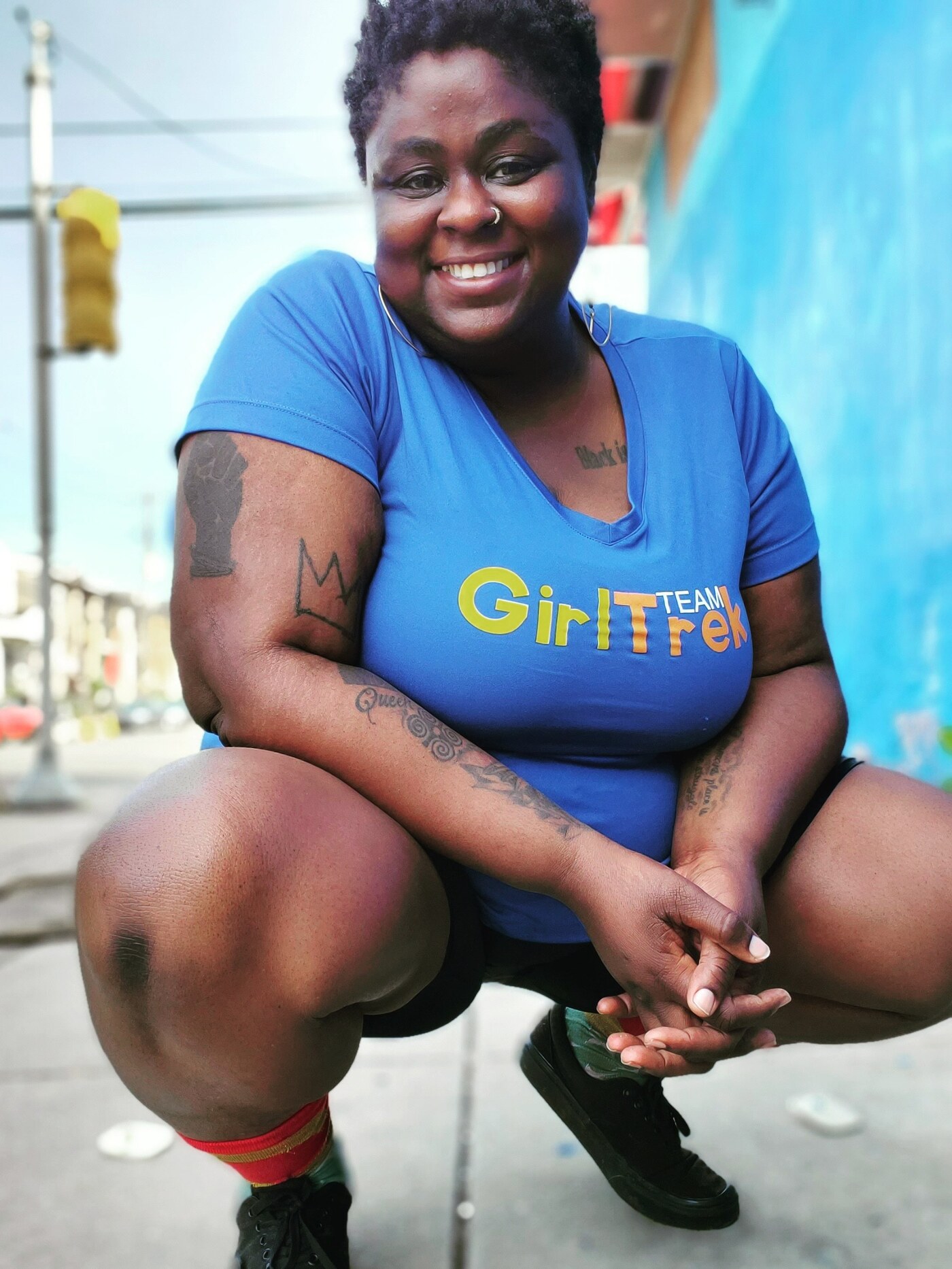 Iresha Picot has lost 130 pounds since she joined GirlTrek four years ago. The nonprofit organization is dedicated to the health and healing of black women and girls.

Valerie Francois, and her daughter Victoria, who are walking together in Plainsboro, N.J., say they have also been energized by GirlTrek's recurring discussion around self-care, rooted in the examples set by Audre Lorde and others.

Iresha Picot says the Bootcamp is radically different from her days studying African-American Studies and Women's Studies as an undergraduate.

She says she's looking forward to reuniting with her local walk team, and sharing the stories and revelations they've experienced on this journey. But until they can meet up again in person, she's been drawing up an ever-expanding virtual map.

"I can be taking my walk and with one hashtag I'm connected to women who are doing these walks all over the country," Picot says with a smile. "You don't have to do this walk alone."