Accessibility links
Bans On Police Use Of Chokeholds And Other Neck Restraints Difficult To Enforce A federal ban on police use of chokeholds has been discussed in recent weeks, but NPR reviewed the internal policies of several large U.S. police departments and found them difficult to enforce. 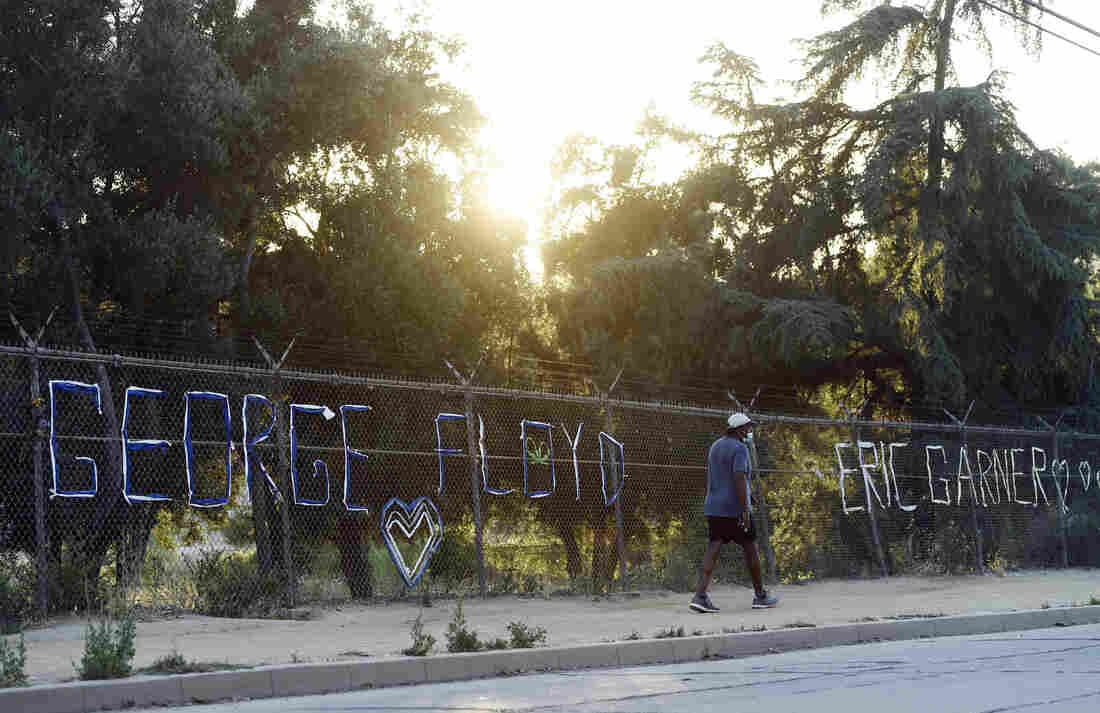 A walker passes the names of George Floyd and Eric Garner spelled out in fabric at the Say Their Names: Silver Lake Memorial on June 9 in Los Angeles. There has been a recent push for a nationwide ban on police chokeholds. Chris Pizzello/AP hide caption 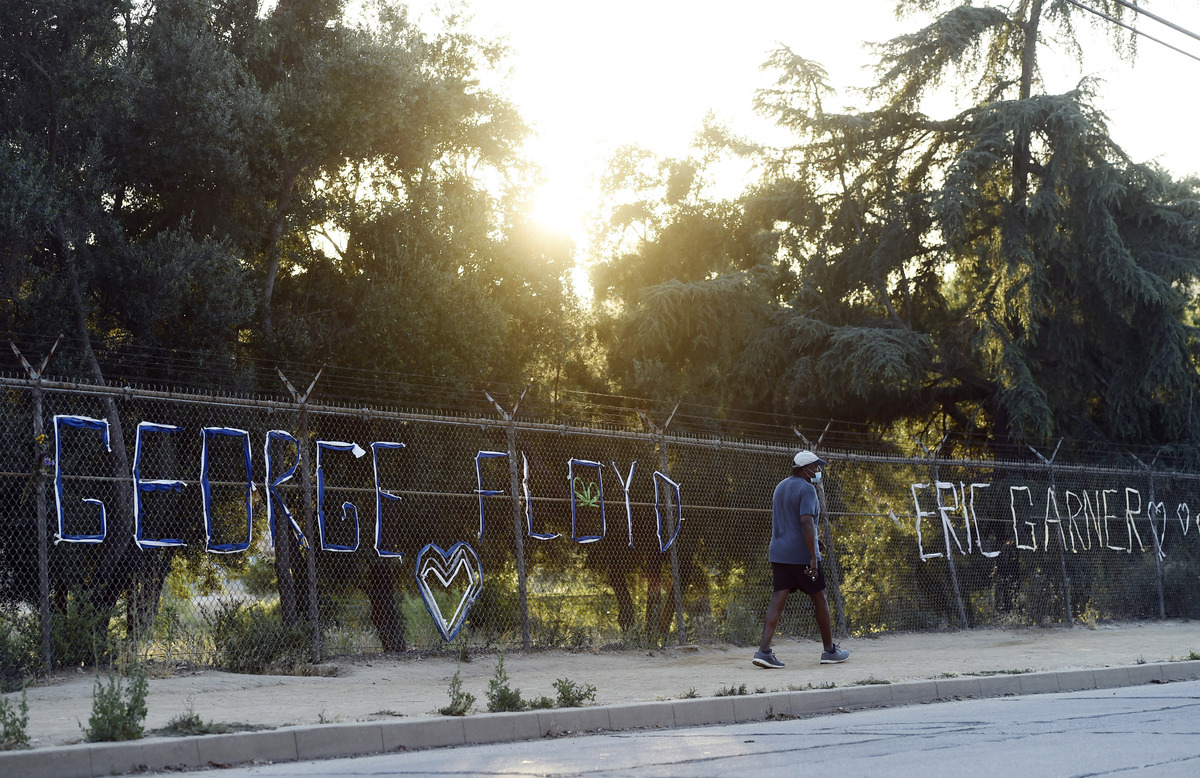 A walker passes the names of George Floyd and Eric Garner spelled out in fabric at the Say Their Names: Silver Lake Memorial on June 9 in Los Angeles. There has been a recent push for a nationwide ban on police chokeholds.

In the wake of George Floyd's death, a flashpoint in the debates over police reform has been the push to ban chokeholds nationwide. Advocates believe that enshrining a ban into law will deter police violence.

And it's gaining traction. Congressional Democrats have proposed a legislative package that calls for a ban on all neck restraints. President Trump, though he stopped short of full support of a ban, said late last week that police should avoid using chokeholds. And the state of New York passed a law banning the tactic.

But an NPR review of bans on neck restraints in some of the nation's largest police departments found them largely ineffective and subject to lax enforcement. And when chokeholds specifically were banned, a variation on the neck restraint was often permitted instead.

"The bottom line is that you're cutting off somebody's air supply [or] the blood flow to their brain and eventually they will be incapacitated," explains Lorenzo Boyd, director of the Center for Advanced Policing at the University of New Haven. 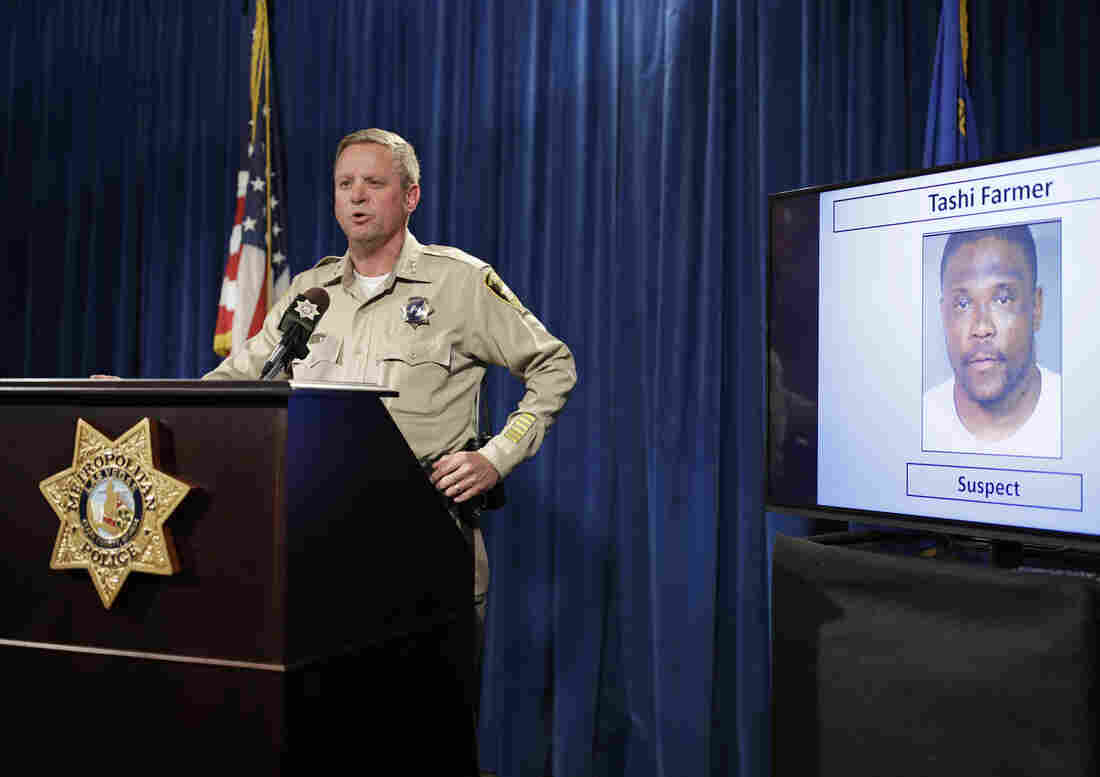 Las Vegas police Undersheriff Kevin McMahill speaks in Las Vegas on May 17, 2017, after the death of Tashii S. Brown, known as Tashii Farmer-Brown. Police had used a stun gun and a chokehold on him. In a change announced in September 2017, Las Vegas police officers can no longer routinely use neck restraints to render combative people unconscious. John Locher/AP hide caption 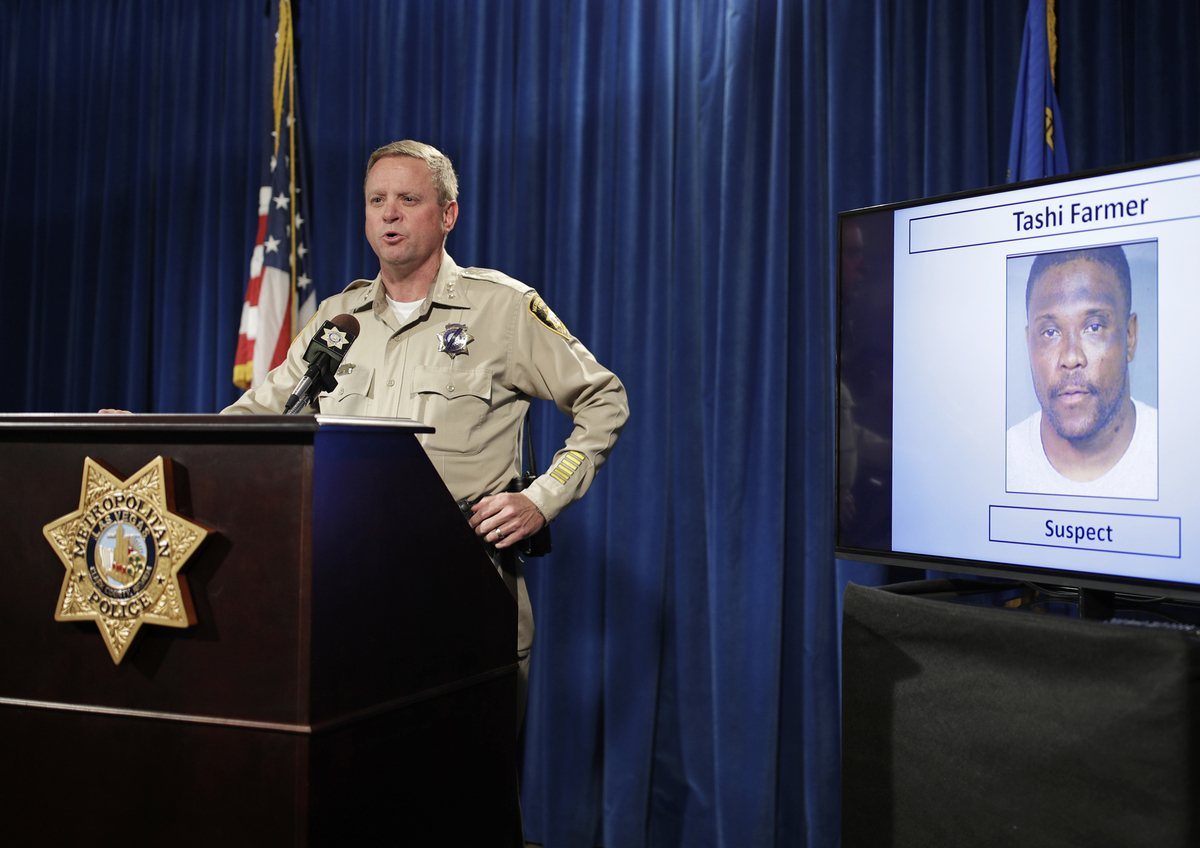 Las Vegas police Undersheriff Kevin McMahill speaks in Las Vegas on May 17, 2017, after the death of Tashii S. Brown, known as Tashii Farmer-Brown. Police had used a stun gun and a chokehold on him. In a change announced in September 2017, Las Vegas police officers can no longer routinely use neck restraints to render combative people unconscious.

And yet over the past two decades there have been multiple people who have died when neck restraints were used in their arrest.

Eric Garner, who died after being put in a chokehold by New York City police officer Daniel Pantaleo, remains one of the most high-profile deaths.

New York Criminalizes Use Of Chokeholds By Police

In Minneapolis, where Floyd was killed and where chokeholds had been permitted until this month, the police used neck restraints at least 237 times since 2015 and rendered 44 people unconscious through the technique, according to a report by NBC.

Paul Butler, a former federal prosecutor and author of the book Chokehold: Policing Black Men, says part of the problem is a lack of accountability.

"If we look at the ban in New York City, it's kind of like a rule in an employee handbook: 'Don't use a chokehold.' We shouldn't expect those kinds of light bans to work," he says.

In fact, when the city's Civilian Complaint Review Board studied its use in 2014, it found hundreds of complaints a year alleging that police officers used the technique — and even concluded that the use of chokeholds at the time appeared to be rising despite a decades-long ban.

"There is an enormous bias inside the police department when the police department is disciplining its own people to avoid diluting the power of any particular officer to use or employ a chokehold," says Richard Emery, who served as the chair of the Civilian Complaint Review Board when it reviewed the use of chokeholds in New York City.

He says he doesn't think a nationwide prohibition on neck restraints will lead to more prosecutions but that it could lead to better outcomes.

"It'll have a deterrent effect. Whether it will actually result in more discipline and more prosecutions is doubtful in my mind. I think it is worth doing," he says. 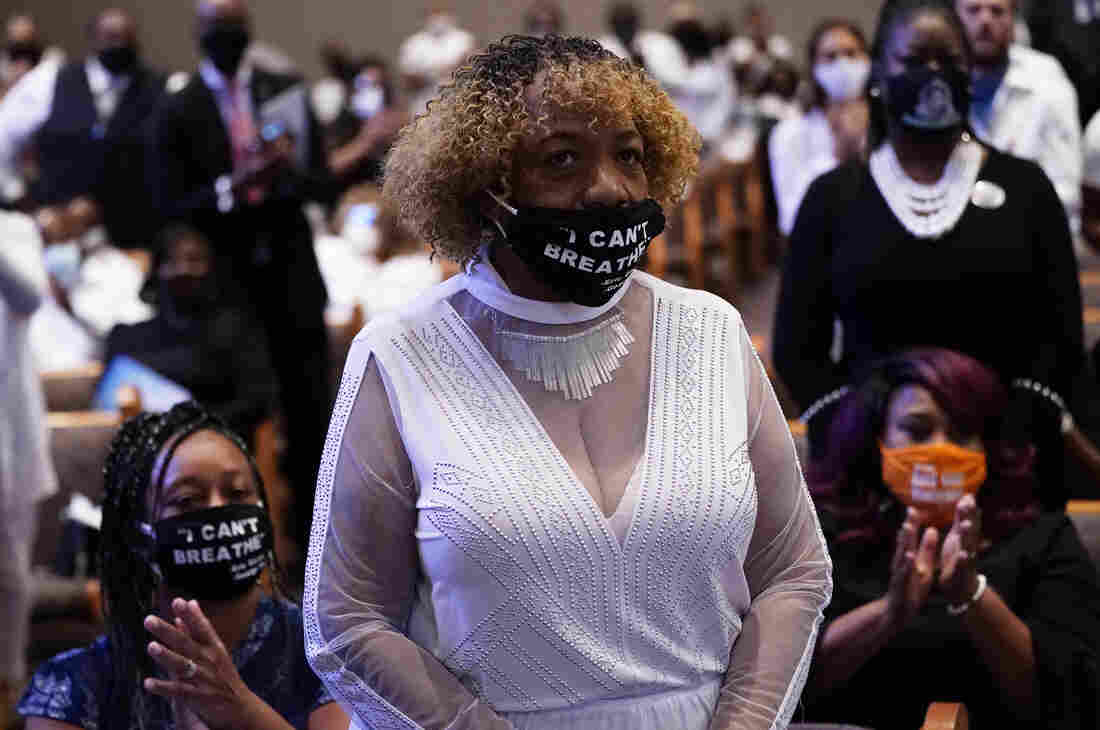 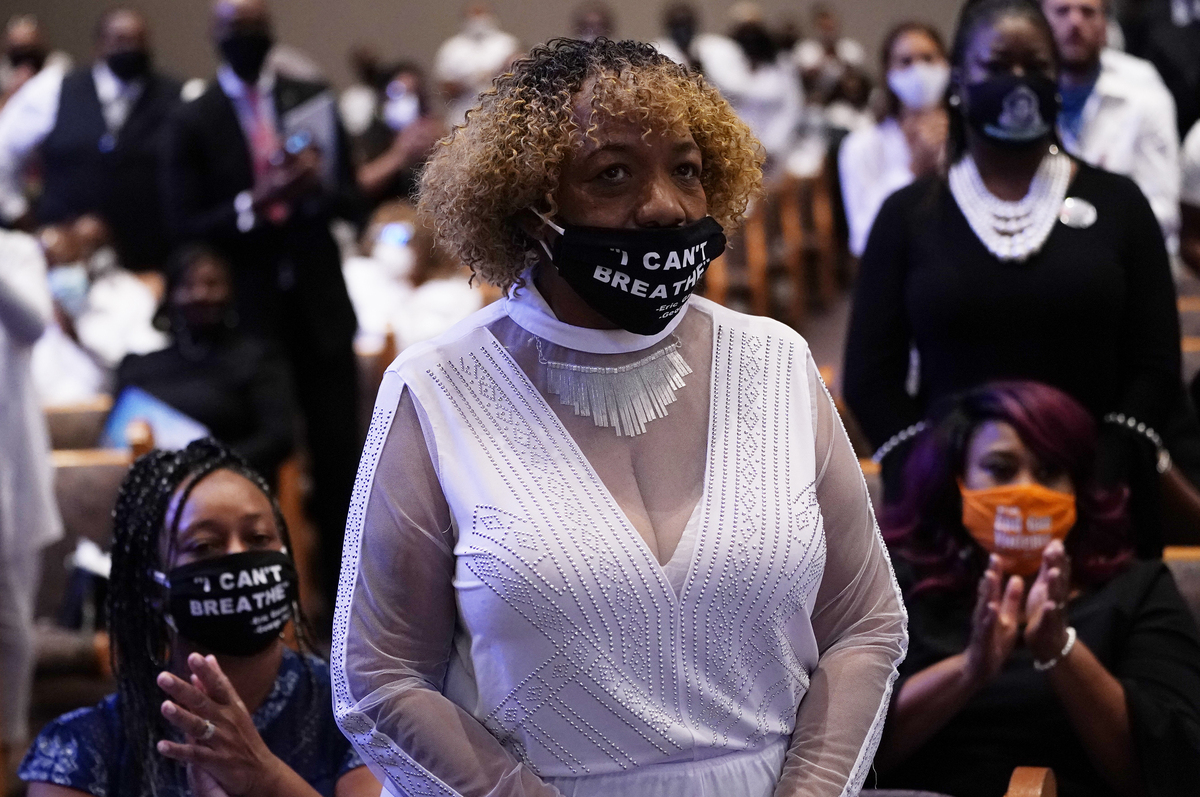 Eric Garner's mother, Gwen Carr, attends the funeral service for George Floyd at The Fountain of Praise church in Houston on June 9.

Some say that neck restraints have their purpose in responsible policing and should not be subject to an outright ban.

"With the proper training and the proper continued training, I think it is a safe method to control somebody," says Michael Schlosser, director of the University of Illinois Police Training Institute. His police academy trains more than 800 police agencies in Illinois.

"Actually, sometimes if you can control somebody like that, a lot of times you might have less injury rather than getting in an all out fight, and people have a chance to have greater injury to the officer or to the arrestee," he says.

But he adds that "without the proper training, without continued training, knowing how much pressure to give ... it needs to be so many repetitions that it's automatic for you. Officers are expected to do so much. But physical skills sometimes get left behind just because of the lack of funds by the department."

Police officers have returned time and time again to the neck restraint as a way to gain compliance.

"It is the vulnerability of every human being to have the most important organ in their body easily affected and directly affected by constricting the neck," Emery says.

"And therefore, unlike other parts of the body, it is the place where police officers go instinctively, automatically and even by virtue of their culture, to dominate any particular individual, especially of individuals who they feel threatened by, who are larger or who are strong or where they feel are intimidating even when they're not."

And that fundamentally is the challenge for lawmakers. When officers need to take violent action, how might they tamp down the instinct to go to that vital area of the body: the neck.