Accessibility links
Trump Rally In Oklahoma On Saturday: What To Know In Tulsa, Okla., on Saturday night — for the first time since the coronavirus shut down events in March — President Trump will hold one of his signature rallies. 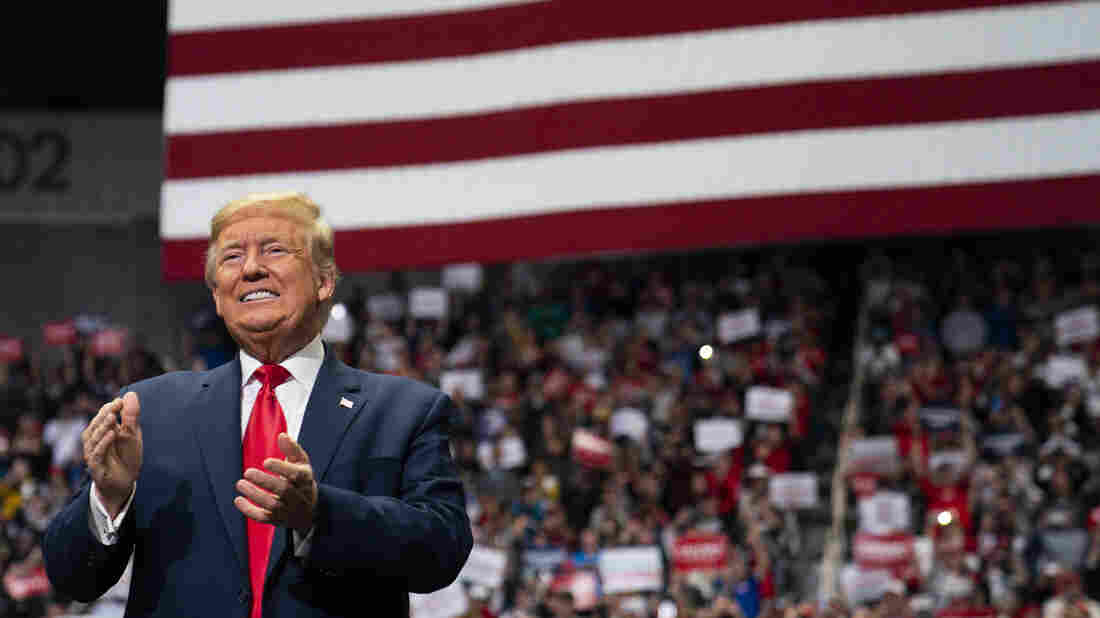 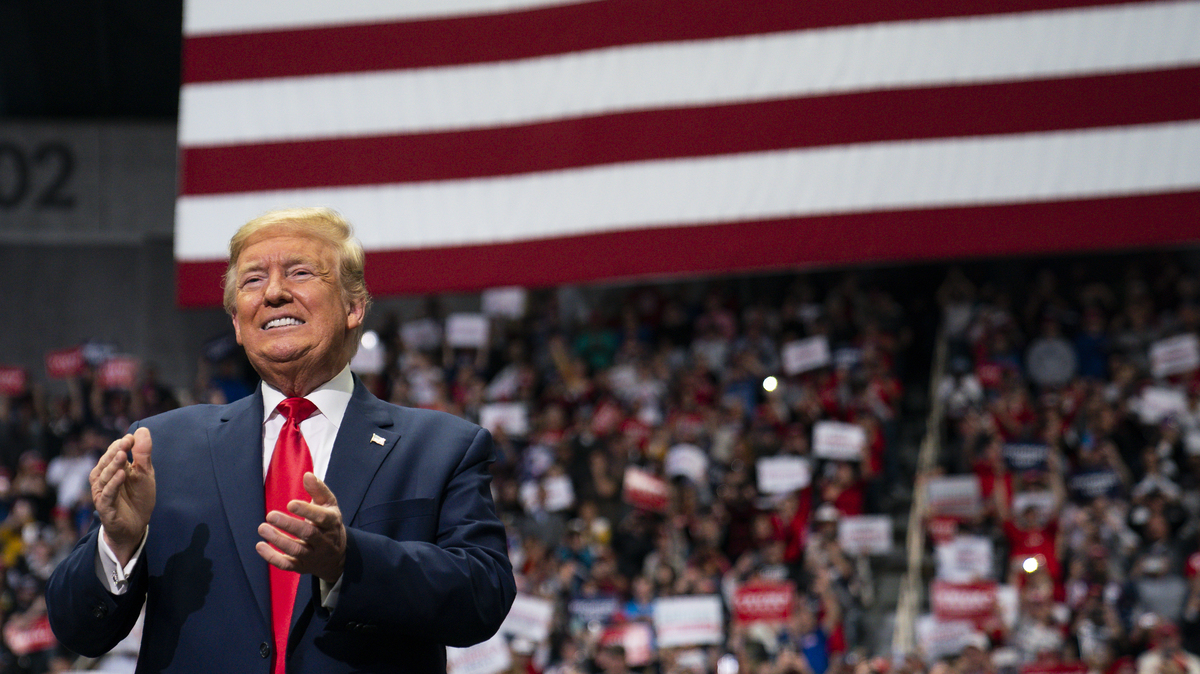 President Trump arrives to address a March 2 campaign rally in Charlotte, N.C.. Saturday's rally, in Tulsa, Okla., will be his first since the coronavirus pandemic halted in-person campaigning.

A packed arena, adoring supporters, "Tiny Dancer" so loud on the speakers you have to shout to be heard. In Tulsa, Okla., on Saturday night — for the first time since the coronavirus shut down events in March — President Trump will hold one of his signature rallies. The campaign said demand for tickets has been incredibly high.

But the pandemic isn't over, of course, and the rally has public health experts worried.

New cases of the coronavirus have surged in Oklahoma in recent days, and Tulsa's top public health official said he wishes the event could be postponed until the virus is less of a concern.

Meanwhile, the Trump campaign is issuing a warning when people register for tickets: "By clicking register below, you are acknowledging that an inherent risk of exposure to COVID-19 exists in any public place where people are present," the disclaimer reads. By attending the rally, it goes on, "guests voluntarily assume all risks related to exposure to COVID-19" and agree not to hold the campaign or venue liable.

There's a reason this event is in Oklahoma, and it has nothing to do with the Electoral College map. (Oklahoma is as red as they come, not even remotely a swing state.) Oklahoma was not initially hit hard by the coronavirus and is far along in its reopening, with no restrictions on large, in-person gatherings. And so the Trump campaign intends to pack the BOK Center right up to its 19,000-seat capacity.

That number of ticket requests couldn't be verified, but campaign manager Brad Parscale has tweeted increasingly large numbers of people asking to get in. (The campaign uses these sign-ups to gather information on supporters so it can be used by its massive data-driven voter targeting operation.)

So, no, there won't be room for proper social distancing. Attendees, who will be traveling from other states and standing in line for hours, will not all be 6 feet apart.

And that's the way Trump wants it.

"We expect to have, it's like a record-setting crowd," Trump said Monday at the White House. "We've never had an empty seat, and we certainly won't in Oklahoma."

Of course, there have been empty seats, especially if his speech drags on or starts meandering. But the campaign is setting up a situation where people will sit in every seat and stand shoulder to shoulder on the floor of the arena.

Trump said in April that social distancing "wouldn't look too good" for a campaign rally. What he's going to get is a rally that looks just like old times.

"There is no perfectly safe way to do this," said Dr. David Relman, a professor of medicine at Stanford University. "This virus is really transmissible, and getting a lot of people packed together, especially without masks, but even without proper distancing, just creates a real risk, and there's no way around that."

Acknowledging the concern, the campaign is taking precautions.

"We are doing temperature checks. You have not seen those at protests, where there are mass gatherings of individuals," said Perrine, comparing rally plans to the protests for racial justice in cities and towns across the country in recent weeks. "We are providing masks — again not something you have seen at protests. But we are providing those to make sure individuals feel comfortable at a rally. And we are providing hand sanitizer. We are taking necessary steps."

That comparison with the protests is something the campaign is leaning into heavily. Trump allies said the same public health concerns weren't voiced when protesters stood shoulder to shoulder on streets throughout America. Trump even tweeted Monday that the press was trying to "Covid Shame" his campaign.

But he added that protests are different from campaign rallies in important ways when it comes to virus transmission. Protests are outside, and people are generally moving around, not staying in the same place for an extended period. "Being stationary and being in one spot for several hours is much, much riskier," Jha said.

There is evidence the virus survives longer indoors than in warm, humid, outdoor air, where sunlight also serves as a disinfectant. Doors open for Saturday's rally at 3 p.m., and the event starts at 7. That's a lot of hours potentially to be near someone carrying the disease.

"Why does he want to subject his supporters to so much risk?" Jha asked.

If everyone wears masks, it could mitigate some of the risk. But while the campaign is passing them out, wearing masks is optional. Trump has refused to wear a mask in public, and polling indicates Republicans are less likely to wear masks regularly.

"You can hand out masks, but if you don't encourage their use, if you don't model that use, my concern is that a lot of people will not follow that public health recommendation," said Nahid Bhadelia, an infectious diseases physician at Boston University School of Medicine. "Which takes us back to the risk of everybody now being indoors and most people not wearing masks."

Dr. Laila Woc-Colburn questioned whether attending the rally was worth it. She's an associate professor of infectious diseases at Baylor College of Medicine and has seen the ravages of the coronavirus in her hospital. Everyone makes their own risk calculations, but she said for people with comorbidities that put them at greater risk, her message would be to stay home. These include things such asthma, diabetes, heart disease, kidney disease, obesity and being older than 65. For them especially, "going to the rally might not be the best thing," she said.

"You know, you can support your candidate in many ways, including from your home," Woc-Colburn said. "You don't have to go and do the rally and put yourself at risk."

The Tulsa Health Department director told the local paper that the coronavirus is transmitting very efficiently in the area.

But the Trump campaign is eager to set up a contrast with former Vice President Joe Biden. The presumptive Democratic presidential nominee has been holding small, socially distant events but has no immediate plans for large, in-person gatherings, while Trump has designs on more big, loud rallies to show off his enthusiastic supporters. The states he has on his list have even higher caseloads than Oklahoma, including Arizona, which has seen a large spike in cases and hospitalizations.