Accessibility links
In 'Terrific Explosion,' North Korea Blows Up Liaison Office The office, north of the Demilitarized Zone, appears to have been empty when it was destroyed. The act follows threats from Pyongyang, and experts say provocations from the North will likely continue. 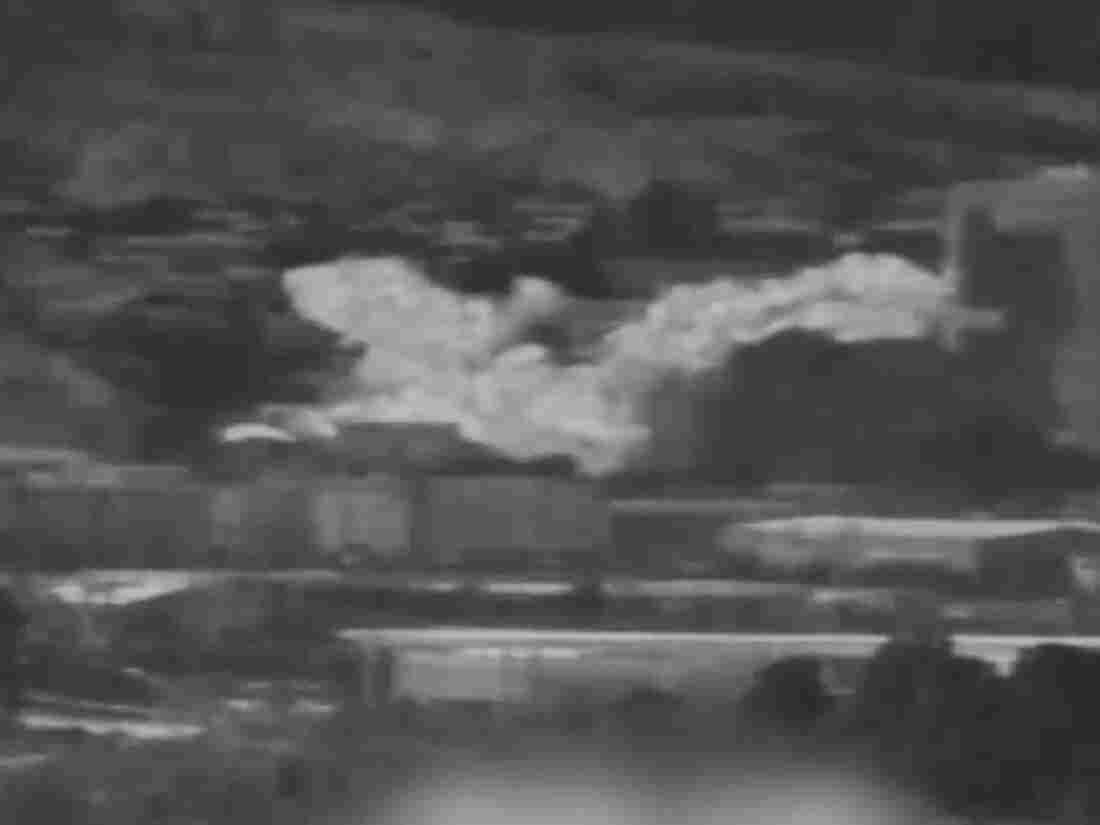 An image from a thermal observation device shows the explosion of an inter-Korean liaison office building in North Korea's Kaesong as seen from Paju, South Korea, on Tuesday. South Korea Defense Ministry/Yonhap via AP hide caption 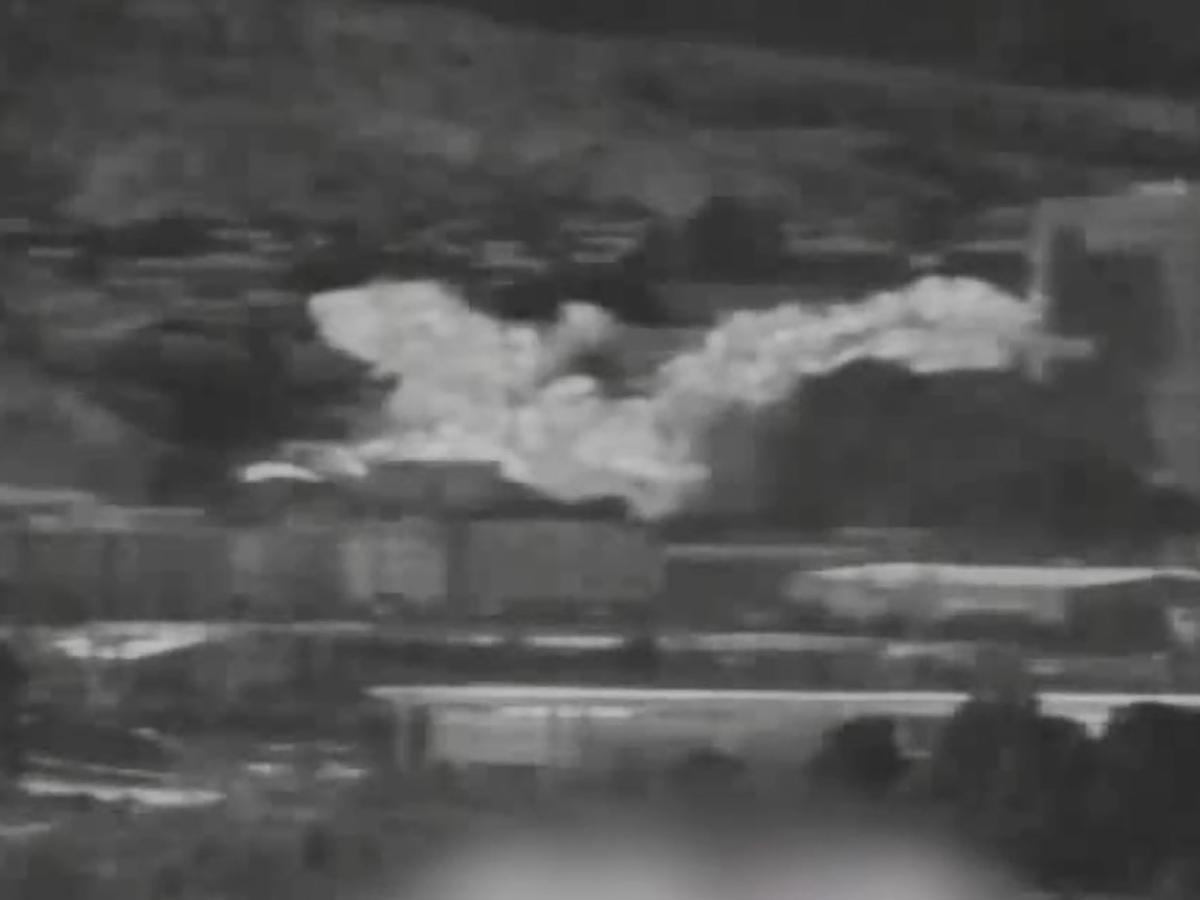 An image from a thermal observation device shows the explosion of an inter-Korean liaison office building in North Korea's Kaesong as seen from Paju, South Korea, on Tuesday.

North Korea blew up its joint liaison office with South Korea on Tuesday, in a dramatic and carefully planned display of rancor toward its southern neighbor. The act follows threats from Pyongyang and signals what experts believe will be more provocations to come.

South Korea's Unification Ministry, which handles inter-Korean ties, confirmed that the liaison office was destroyed by a blast shortly before 3:00 p.m. local time. The office was established in 2018 in the Kaesong Industrial Zone, just north of the Demilitarized Zone.

The liaison office appears to have been empty when it was blown up. Representatives of the South and North pulled out of the office in January, because the coronavirus pandemic. Jointly operated factories in the zone had already shut down amid tensions in 2016.

Pyongyang cut all communication channels with the South last week and telegraphed Tuesday's move over the weekend. North Korean leader Kim Jong Un's sister Kim Yo Jong, an increasingly prominent figure, threatened the "complete collapse" of the office, which she described as "useless." She also warned of military action to vent "our people's resentment" at Seoul allowing North Korean defectors to send propaganda leaflets into the North via balloons.

On Tuesday, North Korea's Korean Central News Agency said the office was destroyed in a "terrific explosion" because the North's "enraged people" were determined to "force [the] human scum, and those who have sheltered the scum, to pay dearly for their crimes," referring to those sending leaflets.

Seoul has often allowed the anti-North leaflets as a form of free speech in a democratic state. But the administration of President Moon Jae-in, which has pursued a policy of engagement with Pyongyang, moved to block the leafleteers by filing a criminal complaint last week and canceling the defector groups' business licenses.

Seoul was not, however, indifferent to the demolition of the liaison office.

"The government makes clear that all responsibility caused by this rests totally with the North Korean side," the National Security Council said in a statement.
"We sternly warn that if North Korea takes steps further aggravating the situation, we will respond strongly."

Following the collapse of nuclear negotiations at an aborted summit with President Trump in Vietnam last year, Kim repeatedly signaled that his patience with diplomacy was at an end. He declared in a New Year's speech that Pyongyang was no longer bound by a moratorium on testing nuclear weapons or strategic weapons.

This year has seen a string of North Korean snubs, slights and provocations aimed at Seoul and Washington, including more than a dozen rocket and missile launches. North Korea Foreign Minister Ri Son Gwon last week dismissed the personal relationship between Trump and Kim as useless. And Kwon Jong Gun, director-general for U.S. affairs at North Korea's Foreign Ministry, suggested that unless the U.S. steered clear of inter-Korean issues, the North could make trouble for U.S. presidential elections in November.

Some analysts, though, see in Pyongyang's moves elements from a well-worn playbook.

"In North Korea's way of stirring a crisis with threats of military provocations, this year isn't special," comments Lee Ho-ryung, a researcher at the Korea Institute for Defense Analyses, a think tank under the Ministry of National Defense in Seoul.

In 2015, for example, "North Korea also took issue with leaflets and how they target its highest dignity," she says. "The pattern is quite similar this year."

The crisis whipped up by the North, she explains, helps distract from a lack of economic progress at home — especially this year, as the North's economy shrivels under the weight of sanctions and closure of the border with China, its main trading partner, because of the coronavirus pandemic.

Lee predicts that the North will continue its provocations by undoing 2018 agreements with Seoul aimed at reducing military tensions, something Pyongyang hinted at on Tuesday.

"They could reinstall guard posts or send more troops to the DMZ region," Lee says.

But she doubts that Pyongyang will go as far as resuming nuclear testing, as, she says, "North Korea would want to pursue something that won't exhibit too much hostility toward the U.S. or the international community."