Accessibility links
North Korea Vows To Send Troops Into Border Cooperation Zones Pyongyang says forces will be sent to Kaesong, an inter-Korean industrial park along the border where a liaison office was blown up by North Korea earlier this week. 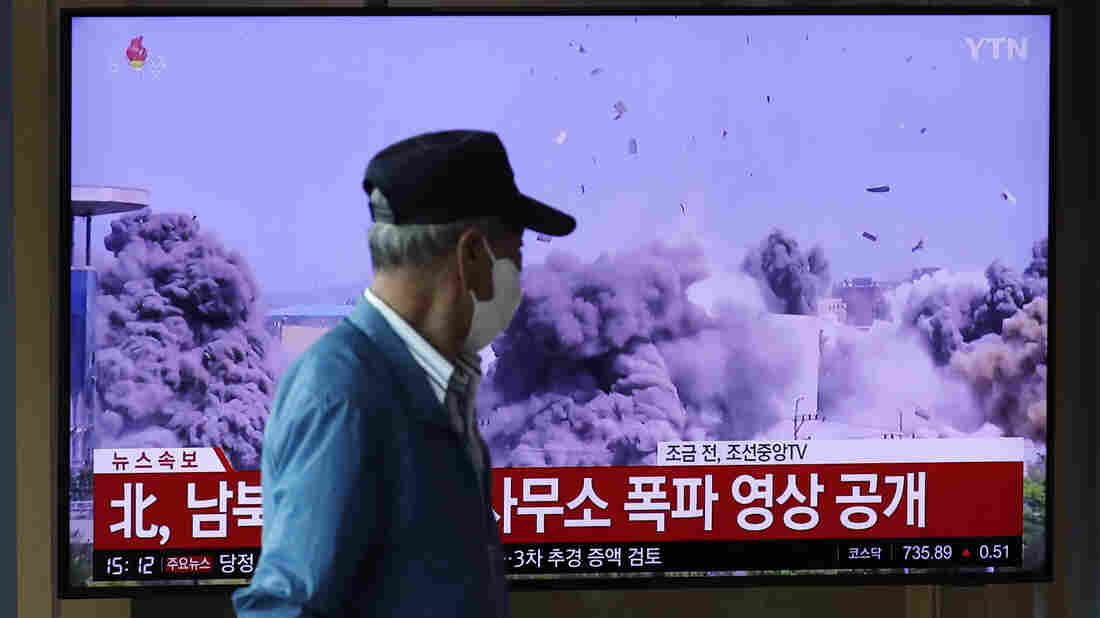 A man watches a television screen showing a news program with video of the demolition of the inter-Korean liaison office building in Kaesong, North Korea, at the Seoul Railway Station on Wednesday. Lee Jin-man/AP hide caption 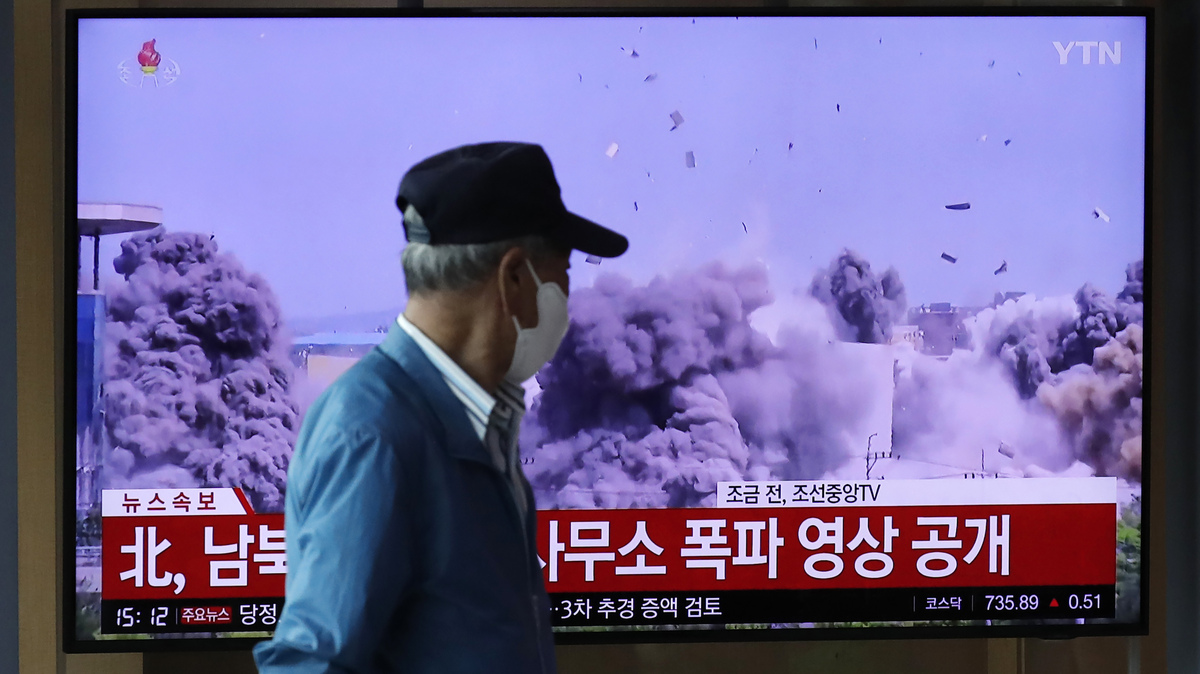 A man watches a television screen showing a news program with video of the demolition of the inter-Korean liaison office building in Kaesong, North Korea, at the Seoul Railway Station on Wednesday.

North Korea has pledged to redeploy troops into demilitarized areas near its border with South Korea, a day after it blew up a liaison office in a provocation that has markedly increased tensions between the two arch-rivals.

Pyongyang said the forces would be sent to an inter-Korean industrial park located along the western border at Kaesong, where the liaison office stood until Tuesday, as well as to Mount Kumgang, a joint tourism zone on the east coast. The zones, both of which lie just inside North Korean territory, have long been viewed as rare areas of cooperation between the two countries that might one day seed a broader détente.

South Korea responded with its own harsh words on Wednesday, warning that such aggressive action could be met in kind.

"These moves thwart two decades of efforts by South and North Korea to improve inter-Korean relations and to keep peace on the Korean Peninsula. If the North actually takes such a move, it will certainly pay the price for it," Jeon Dong Jin, director of operations at the Joint Chiefs of Staff, said.

"Regarding the current security situation, our military is closely monitoring the North Korean military moves round-the-clock and maintains a staunch readiness posture. We will continue to make efforts to manage the situation stably to prevent this from escalating into a military crisis," Jeon said, according to the Yonhap news agency.

Pyongyang also said it would restore guard posts in the heavily fortified Demilitarized Zone, or DMZ, that were removed in 2018 during a brief period of improved relations. That followed a period of particular tension that was stoked by tit-for-tat public insults traded by President Trump and North Korean leader Kim Jong Un.

Seoul offered to send special envoys to the North to try to reduce tensions, but leader Kim Jong Un's sister, Kim Yo Jong, rejected the overture, according to North Korean state media. 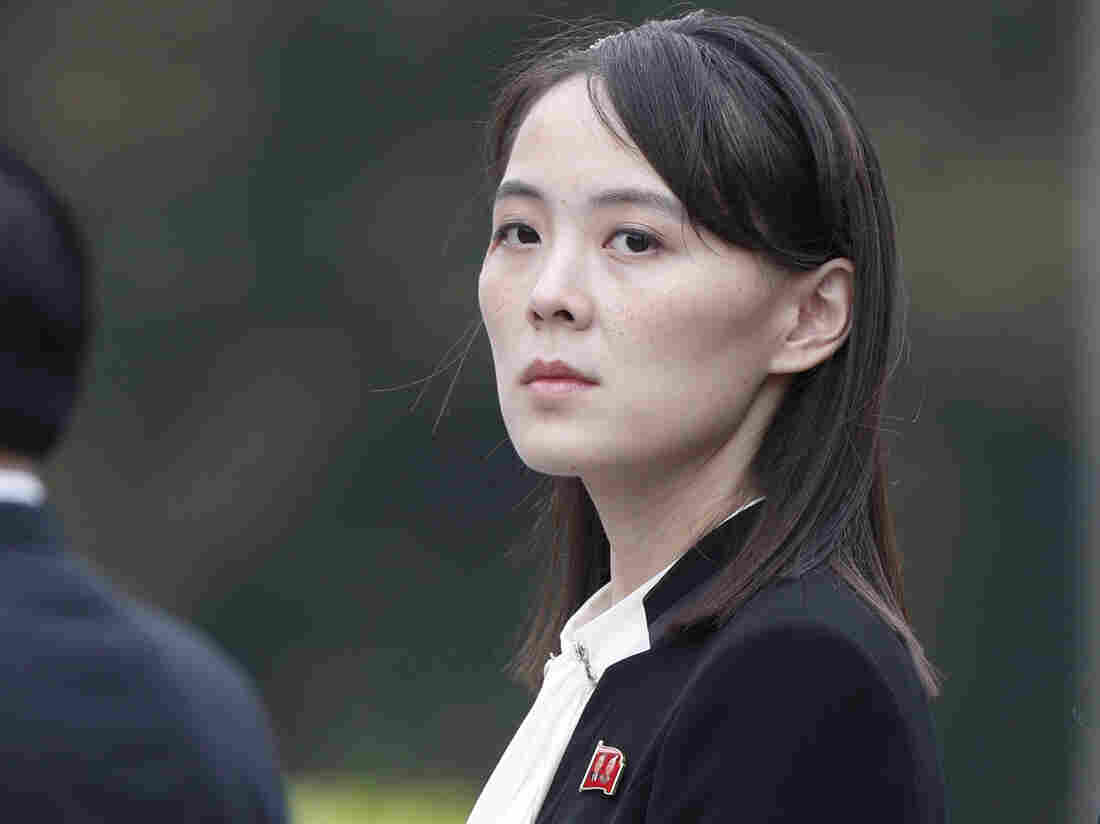 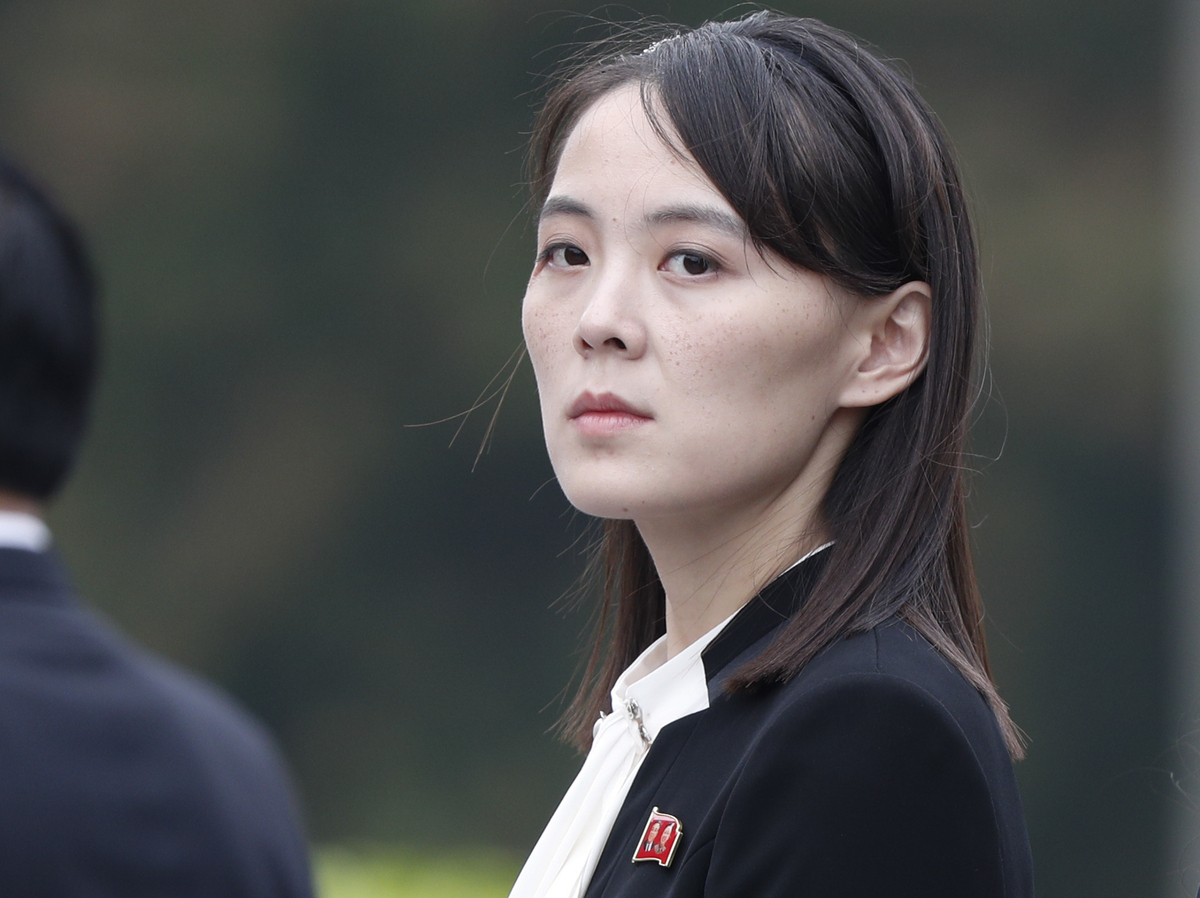 Cha Du Hyeogn, a former South Korean government official and principal fellow at the Seoul-based Asan Institute for Policy Studies, says Pyongyang's campaign of pressure on the South is meant less to extract concessions, and more as "an expression of an accumulated sense of betrayal, that they have been exploited and tricked by the South for the past two years," in a fruitless process of rapprochement, which did not yield the sanctions relief Pyongyang sought.

South Korea's Unification Minister Kim Yeon-chul, who is in charge of relations with North Korea, offered to resign Wednesday, to take responsibility for the sudden deterioration in inter-Korean ties.

In recent weeks, the two sides seem to have fallen back into a familiar pattern of verbal barbs and saber-rattling. Among other things, the North has vowed to resume military exercises at the border region, which Seoul says would violate 2018 agreements intended to pull forces back from the DMZ, halt military exercises and reduce tensions. The agreement also allowed troops to de-mine parts of the DMZ, and excavate the remains of soldiers killed in the Korean War.

The latest trigger for North Korea's ire appears to derive from the activity of defectors living in South Korea who have sent balloons filled with anti-Pyongyang leaflets to drop across the border. The leaflet drops — which North Korea says insult their leader's dignity and violate the 2018 Panmunjom Declaration — have been ongoing for years and Pyongyang has periodically lashed out at them.

It also follows rumors of Kim's ill health after he disappeared from public view for weeks. In the interim, Kim Yo Jong, a trusted adviser, appears to be taking a more hands-on approach.

She played a prominent role in the diplomacy at the 2018 Pyeongchang Winter Olympics, and the rounds of summitry between Pyongyang, Washington and Seoul that followed.

But following an abortive (and from her brother's point of view, humiliating) Trump-Kim summit in Vietnam in 2019, Kim Yo Jong dropped from sight, only to reappear more recently among hardliners, including former spymaster Kim Yong Chol, spouting tough talk aimed at Seoul and Washington.

Earlier this week, Kim Yo Jong referred to the leafleteers as "mongrels" and on Wednesday she verbally attacked South Korean President Moon Jae-in, accusing him of "pro-U.S. flunkeyism" for failing to apologize for the defectors' actions.

In turn, Moon's office fired back at the younger Kim, calling her "rude" and "senseless" and warning that Seoul would no longer tolerate her indiscretions.