Accessibility links
High-Schoolers' Winning Podcast Tackles Environmental Racism A group of students from Brooklyn see every day how climate change disproportionately affects their community. They made a podcast that asked: Why? 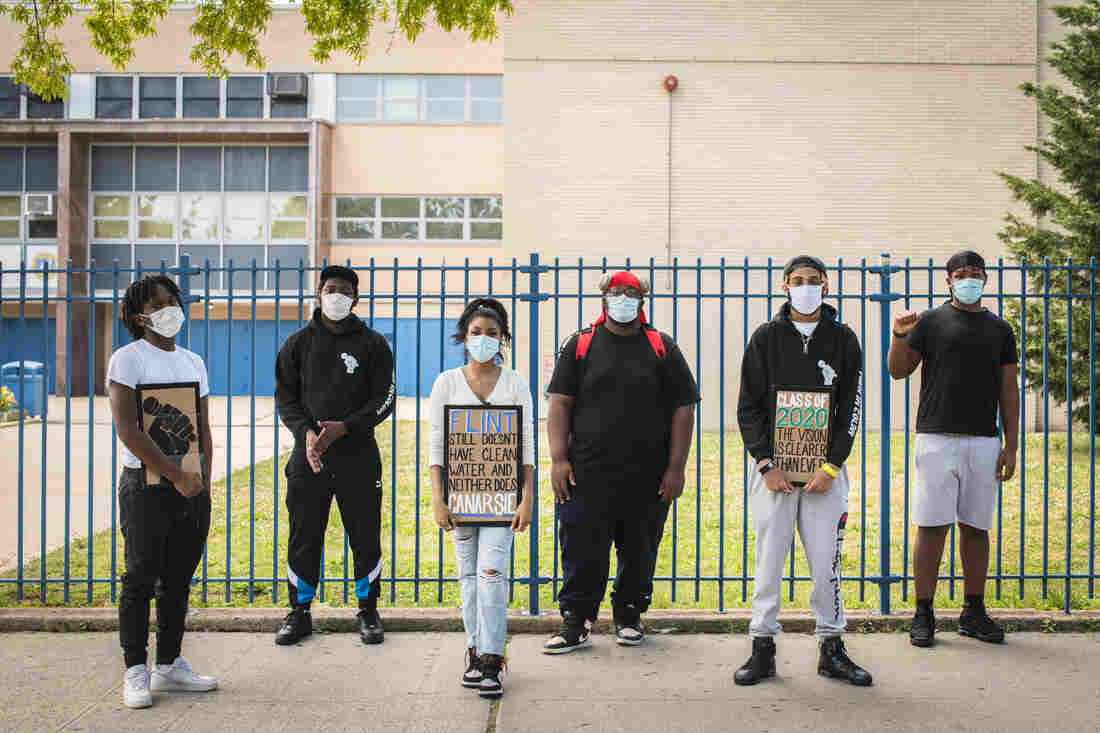 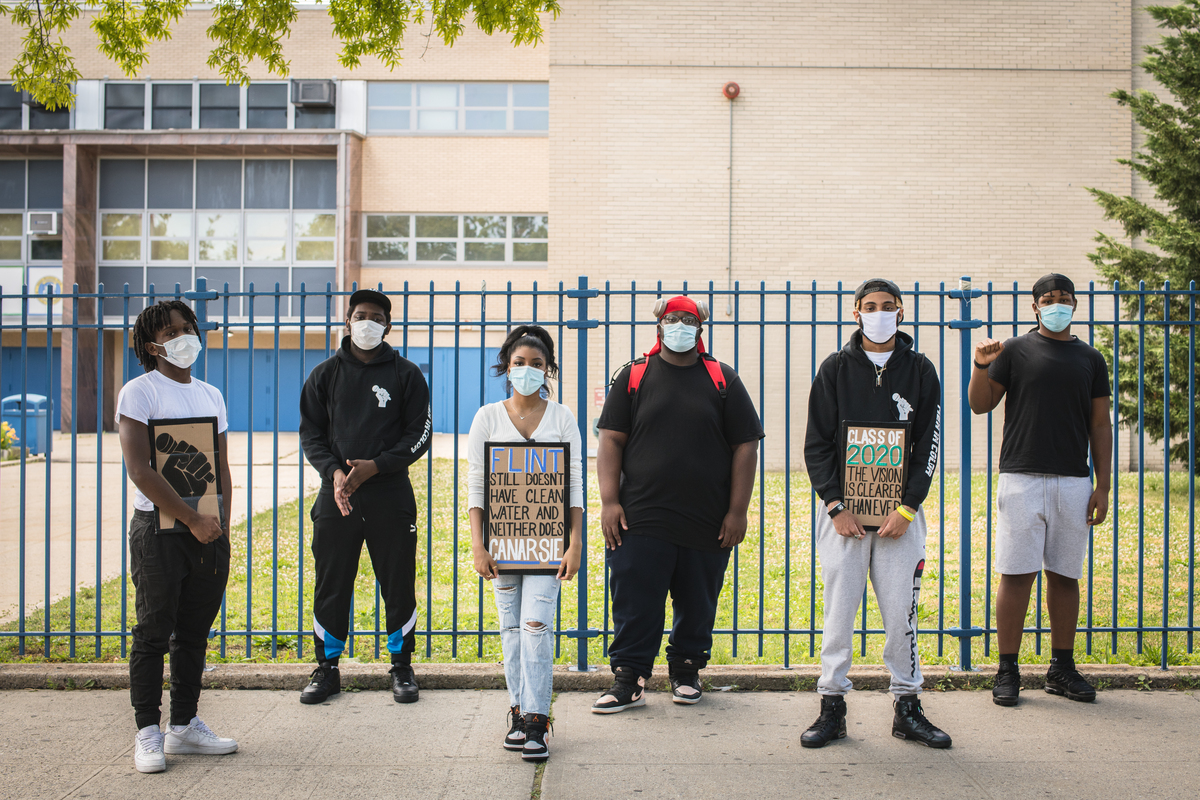 The club was supposed to meet once a week. But for many of the members of Men in Color, Wednesday afternoons turned into Monday afternoons and Thursdays too.

"After school, we were always in Mr. C's room," says Jaheim Birch-Gentles, a recent graduate of the High School for Innovation in Advertising and Media in the Canarsie neighborhood of Brooklyn. He's referring to one of the club's advisors, Mischaël Cetoute. The club served as a safe space for students to talk through issues and ideas.

The Winners Of The NPR Student Podcast Challenge

Those afternoon meetings gave rise to the Flossy Podcast, where the students tackle big social issues mixed in with their lived experiences.

Their episode about climate change and environmental racism is one of this year's grand-prize winners in the NPR Student Podcast Challenge. It was created by Jaheim and fellow club members Joshua Bovell, Brianna Johnson, Jamar Thompson, Kamari Murdock, Isaiah Dupuy, with theme music produced by club member Ieszan McKinney.

The episode begins with the idea that, "climate change Is racial injustice," and focuses on the idea that pollution and the environment impact communities differently — even within Brooklyn.

"For people growing up in Canarsie, we don't really realize we're living in these areas," says Joshua Bovell in the podcast. "But then you go somewhere else, like Mill Basin, and you're like, 'Why is this so different than where I live?' "

They visited a Climate Change March in Manhattan, where they saw mostly white people demonstrating. And in their podcast they wonder, aloud, Why?

They discuss the obvious barriers: Time. Location. Education. And then they bring in their own experiences, with climate events they've experienced, such as hurricanes, and the fact that their school sits near a landfill.

Environmental racism, explains Birch-Gentles in an interview, is "something that we can actually see and taste." He points to the situation with the school's drinking fountains: "People would drink from the water fountain and afterward they really wouldn't feel good," he says. It turns out, the school had lead in its pipes. Lead is actually a common problem in schools, especially in Brooklyn's aging buildings, where about 80 percent of public schools had a faucet or fixture leaching lead, according to a 2017 report.

The students cited in their reporting research that shows climate change, including rising temperatures in cities and poor air quality, disproportionately affects non-white neighborhoods. Black communities face dangerously high levels of pollution and are more likely to live near landfills and industrial plants that pollute water and air and erode quality of life, according to a 2018 report from the Environmental Protection Agency.

For co-host Jamar Thompson, the topic is not only urgent and relevant, it's also related to what's happening now with protests and Black Lives Matter. "Racism is like a tree," he says, "and police brutality and environmental racism are just a couple of branches off that giant tree."

Young people's voices often get left out of these conversations, says Thompson, and adults need to do a lot more listening.

"They feel as though, because we are young, we don't know what we're talking about when we speak about certain things. And I feel like that isn't true," he adds. " I don't speak about things I don't know about."

NPR's Student Podcast Challenge is a nationwide competition that asks participating students and teachers to take a topic, a lesson, or a unit they're learning about, and turn it into a podcast.

When he does know something, Thompson says, or when he sees something that isn't right, he speaks up about it. That's his message for young people especially now.

The Flossy Podcast wouldn't have been possible if the club hadn't decided to build a recording studio at the school, with help from several adults. It took about two years, a big grant, and lots of hard work.

When the students pitched the idea, "I was like, 'OK, let's make that happen,' " recalls Cetoute, a restorative justice coordinator from the Center for Court Innovation who helped oversee the club. "I promise you that it was the most frustrating process in the world. But when they finally get that support, they win something. And that completely changes, for the rest of their life I think, how much they will believe in the power of their voice."

Best Of The Best: Here Are The Finalists In The NPR Student Podcast Challenge

Being OK with the way they sounded was a journey, says Birch-Gentles. "When I heard how everybody else hears me, it was completely different from what I hear."

But with each episode, he says, his confidence grew. "It forced me to get comfortable because this is how I sound and it's not changing."

He ended up writing his college essay about the experience.

When he first started podcasting, "I just viewed myself as a kid from the neighborhood of Canarsie, and I'm speaking about what I've seen and my experiences."

Birch-Gentles didn't think of himself as an activist then, and even now, he resists the term.

Jamar Thompson agrees. He sees himself in much simpler terms: "I'm a person who spoke his truth and I spoke about what I felt. That's kind of more of what I am."

Truth tellers. Sharing their experiences and their opinions and inspiring other young people to do the same.