Accessibility links
Supreme Court Upholds DACA, Ruling Against Trump Administration The decision is a dramatic victory for immigration advocates and gives a new lease on life for the so-called DREAMers, immigrants who were brought to the U.S. illegally as children. 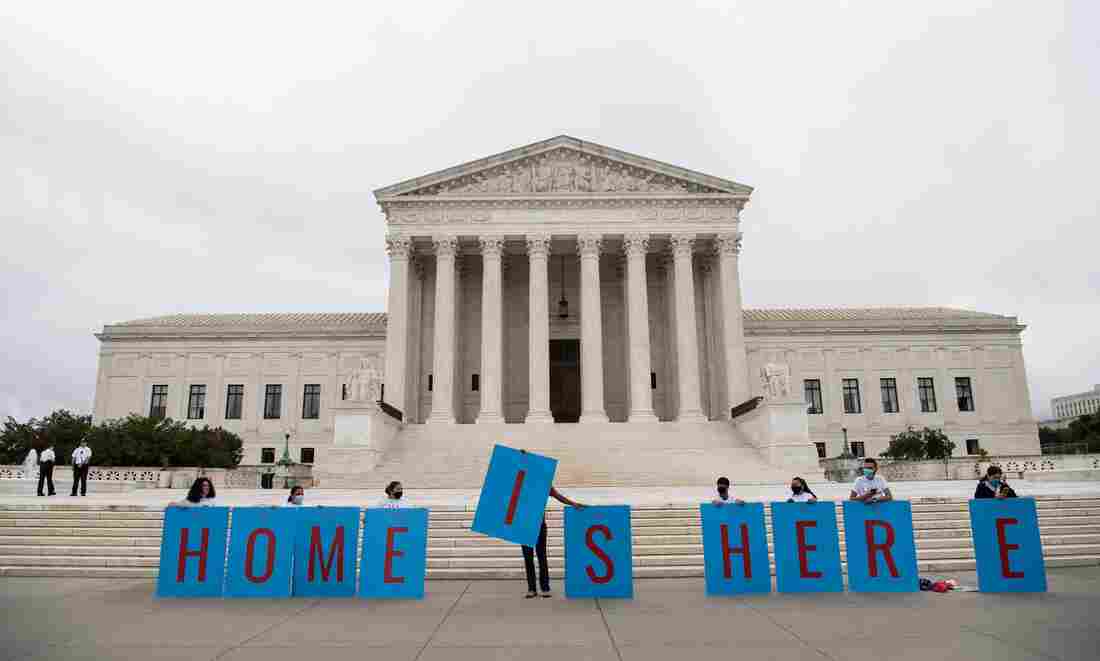 Activists demonstrate in front of the Supreme Court in Washington, D.C., on Thursday as the court rejected the Trump administration's move to rescind the Deferred Action for Childhood Arrivals program. Nicholas Kamm/AFP via Getty Images hide caption 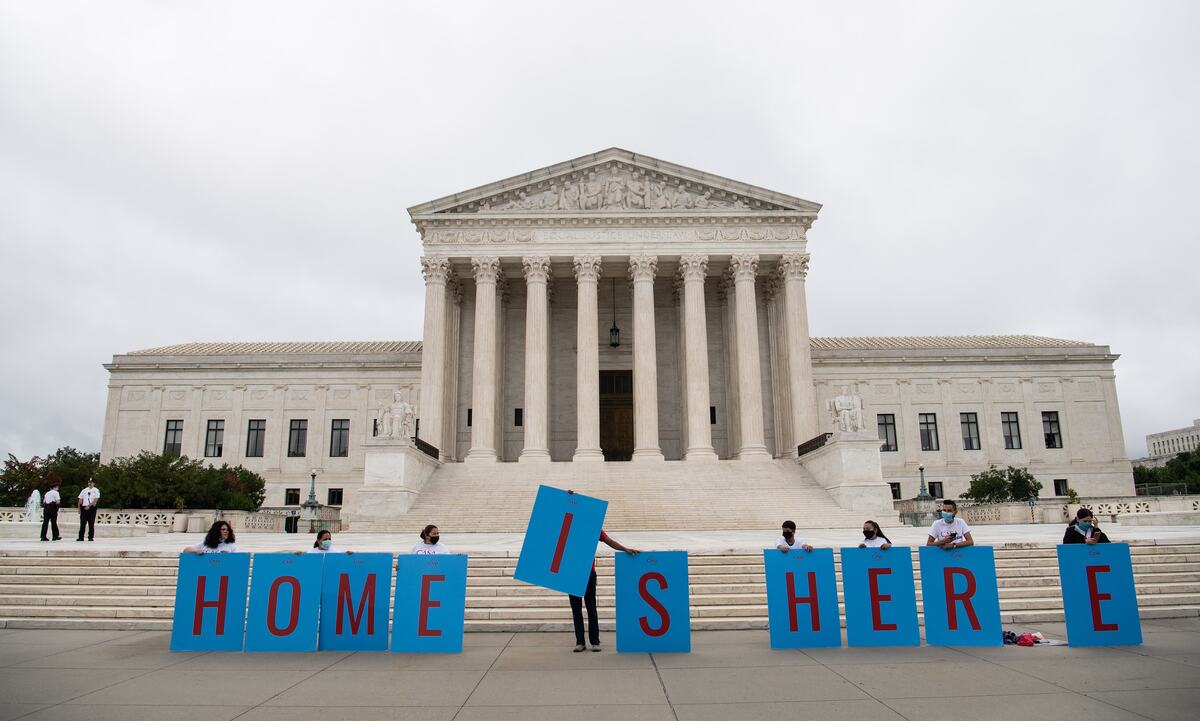 Activists demonstrate in front of the Supreme Court in Washington, D.C., on Thursday as the court rejected the Trump administration's move to rescind the Deferred Action for Childhood Arrivals program.

In a major rebuke to President Trump, the U.S. Supreme Court has blocked the administration's plan to dismantle an Obama-era program that has protected 700,000 so-called DREAMers from deportation. The vote was 5-4, with Chief Justice John Roberts writing the opinion.

Under the Obama program, qualified individuals brought to the U.S. as children were given temporary legal status if they graduated from high school or were honorably discharged from the military, and if they passed a background check. Just months after taking office, Trump moved to revoke the program, only to be blocked by lower courts — and now the Supreme Court.

Roberts' opinion for the court was a narrow but powerful rejection of the way the Trump administration went about trying to abolish the program known as Deferred Action for Childhood Arrivals, or DACA.

"We do not decide whether DACA or its rescission are sound policies," Roberts wrote. "The wisdom of those decisions is none of our concern. Here we address only whether the Administration complied with the procedural requirements in the law that insist on 'a reasoned explanation for its action.' "

In 2017, then-Attorney General Jeff Sessions simply declared DACA illegal and unconstitutional. "Such an open-ended circumvention of immigration laws was an unconstitutional exercise of authority by the executive branch," he said at the time. Sessions argued that the program should be rescinded because he said it was unlawful from the start.

But, as Roberts observed, the attorney general offered no detailed justifications for canceling DACA. Nor did the acting secretary of homeland security at the time, Elaine Duke, who put out a memo announcing the rescission of DACA that relied entirely on Sessions' opinion that the program was unlawful.

As Roberts noted, Duke's memo didn't address the fact that thousands of young people had come to rely on the program, emerging from the shadows to enroll in degree programs, embark on careers, start businesses, buy homes and even marry and have 200,000 children of their own who are U.S. citizens, not to mention that DACA recipients pay $60 billion in taxes each year.

None of these concerns are "dispositive," Roberts said, but they have to be addressed. The fact that they weren't addressed made the decision to rescind DACA "arbitrary and capricious," he wrote. And none of the justifications the administration offered after the fact sufficed either, including a memo issued by then-Secretary of Homeland Security Kirstjen Nielsen. That memo, said Roberts, was essentially too little, too late. An agency must defend its action based on the reasons it gave at the time it acted, he said, instead of when the case is already in court.

Roberts made clear that an administration can rescind a program like DACA, and indeed immigration experts don't disagree with that bottom line. The problem for the administration was that it never wanted to take responsibility for abolishing DACA and instead sought to blame the Obama administration for what it called an "illegal and unconstitutional" program.

The chief justice didn't address that issue. Instead, says immigration law professor Lucas Guttentag, the justices in the majority seemed to be saying, "Why should the court be the bad guy" when the administration "won't take responsibility" for rescinding DACA by explaining clearly what the policy justifications for the revocation are?

Joining the Roberts opinion were the court's four liberal justices, Ruth Bader Ginsburg, Stephen Breyer, Sonia Sotomayor and Elena Kagan. Sotomayor wrote separately to say that while she agreed that rescinding DACA violated the law for the procedural reasons outlined by the chief justice, she would have allowed the litigants to return to the lower courts and make the case that rescinding DACA also amounted to unconstitutional discrimination.

Justice Clarence Thomas wrote the principal dissent, accusing Roberts of writing a political rather than a legal opinion. Joining him were Justices Neil Gorsuch and Samuel Alito, with separate dissents also filed by Alito and Justice Brett Kavanaugh.

In a tweet, Trump blasted the decision as one of the "horrible & politically charged decisions coming out of the Supreme Court." The president also asked: "Do you get the impression that the Supreme Court doesn't like me?"

Former Vice President Joe Biden, the presumptive Democratic nominee, on the other hand, celebrated the decision, saying in a statement, "The Supreme Court's ruling today is a victory made possible by the courage and resilience of hundreds of thousands of DACA recipients who bravely stood up and refused to be ignored."

In an interview with NPR's Mary Louise Kelly, Ken Cuccinelli, the Trump administration senior official who oversees immigration and citizenship at the Department of Homeland Security, said Trump is considering his options.

"I do expect you will see some action out of the administration," he said, adding: "He is not a man who sits on his hands."

While the decision gives DACA and its hundreds of thousands of recipients a lifeline, the issue is far from settled. The court decided that the way Trump went about canceling DACA was illegal, but all the justices seemed to agree that the president does have the authority to cancel the program if done properly.

As for the immediate future of DACA, the consensus among immigration experts is that there is not enough time for Trump to try again to abolish the program before January. Cornell Law School professor Stephen Yale-Loehr, the author of a 21-volume treatise on immigration law, says, "It's not remotely possible before the election. But if [Trump] is reelected, he almost certainly will try again" to cancel DACA.

For now, though, more individuals eligible for DACA status may be able to apply. Marisol Orihuela, co-director of the Worker & Immigrant Rights Advocacy Clinic at Yale Law School, notes that the administration has refused to accept new applications since 2017. But she thinks that will change now. "Our understanding is that the program is restored to what it was in 2012 when it went into effect," she says.

Guttentag, who teaches immigration law at Yale and Stanford University, says if Trump is not reelected, a new administration could repair "much of the damage" that he says has been inflicted on immigrants during the Trump administration. But, he adds that the immigration system is "completely shattered" and needs "fundamental reform."

Politically, Thursday's decision played out as expected, with anti-immigration groups condemning the decision and DACA recipients jubilant and relieved.

But aside from the president, lots of Republicans are relieved as well. If Thursday's decision had gone the other way, the pressure on congressional Republicans to pass legislation protecting the DREAMers would have been intense.

DACA is an astonishingly popular program, with recent polls showing up to 85% support among Democratic and independent voters, and huge majorities among Republican voters as well.

Indeed, 200 major corporations filed briefs in the Supreme Court supporting the DACA recipients. Among them was Microsoft, which was a plaintiff in one of the cases that made it to the Supreme Court, and its president, Brad Smith.

"There are more than 30,000 DACA registrants working in the health space alone. We've needed these people more than we do today," he said. "Every time I meet with them, I have the same reaction. We are lucky as a country to have them."

Not all DACA critics are against the substance of DACA. Instead, some oppose the fact that Obama, frustrated with congressional inaction, put the program into effect unilaterally through executive order. Ilya Shapiro of the Cato Institute warns of unforeseen consequences if presidents can create new programs that future administrations will struggle to unwind.

"This raises profound issues of executive power and in effect sets out a ratchet whereby statutory changes can be enacted by presidential executive order but can only be rescinded through jumping through various administrative law hoops," he said.

At the end of the day, the man of the hour is Chief Justice Roberts. Amid a politicized and polarized society, he has repeatedly tried to portray the court as apolitical. He sees the growth of organizations on the hard right like the Judicial Crisis Network, and on the hard left like Demand Justice, each trying to stack the court with like-minded justices or pack the court by expanding the number of justices.

"What these decisions underscore is we have a chief justice who's plainly working hard to demonstrate to the American people that the court, unlike the other two branches, is doing its job and doing its best," said Harvard Law School professor Richard Lazarus, who has known the chief justice for decades. "He wants the American people to believe there is a thing called law and justice. His job is to apply it."