Accessibility links
Senators Rip FAA Over Failure To Turn Over 737 Max Documents At a hearing, they accused the agency of "stonewalling" congressional investigators and keeping them "in the dark," in their effort to examine what went wrong in certifying Boeing's troubled airplane. 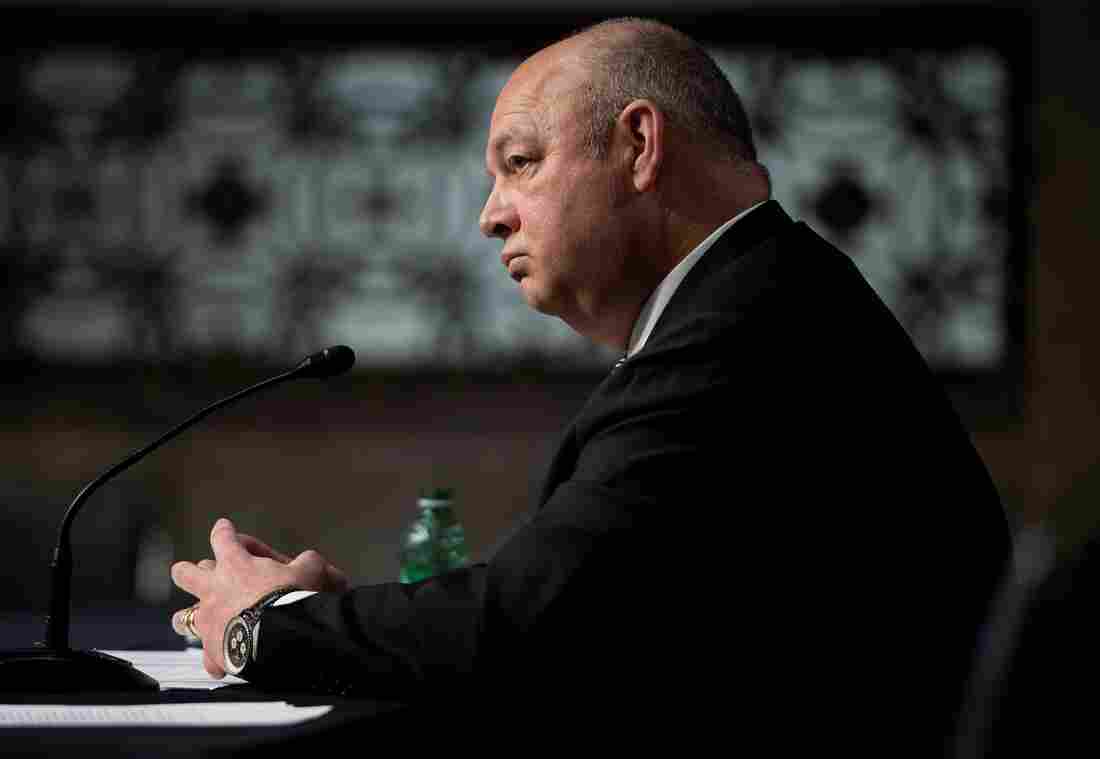 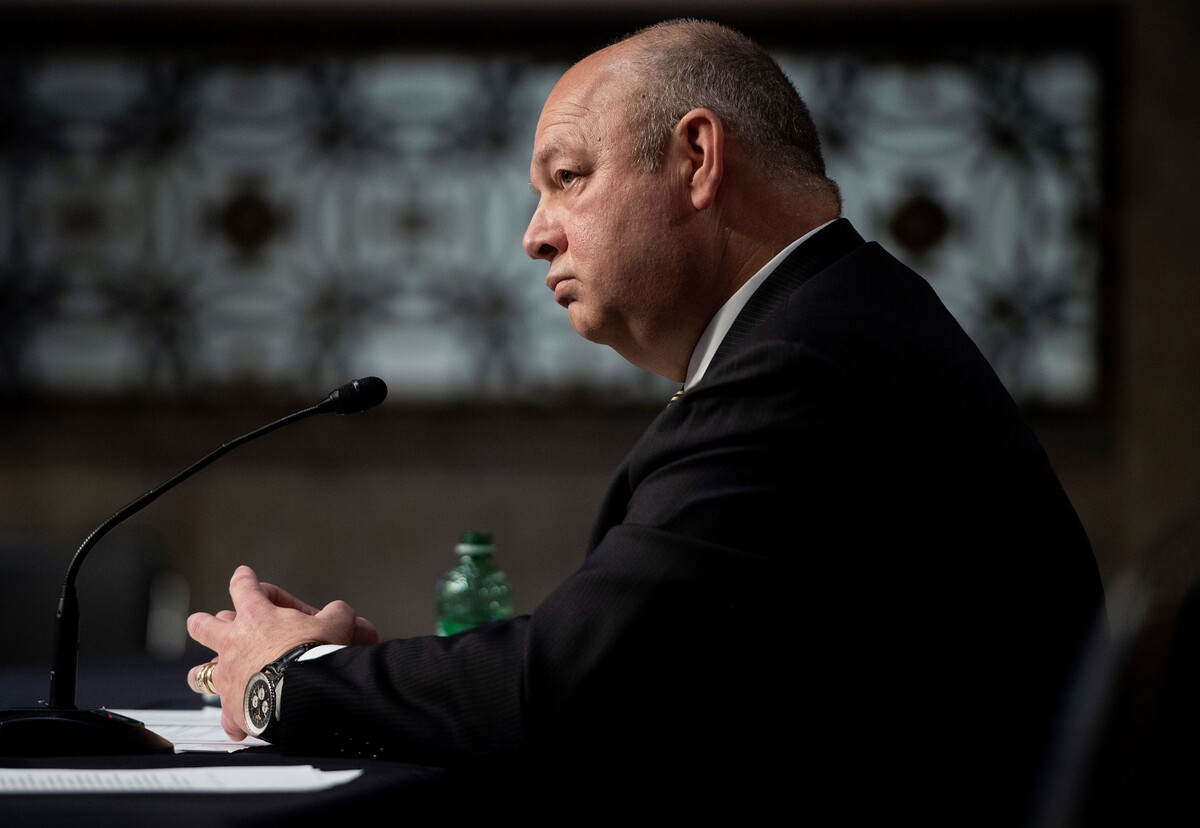 Federal Aviation Administration administrator Stephen Dickson testifies during a hearing of the Senate Commerce, Science, and Transportation Committee on Capitol Hill on Wednesday.

The Federal Aviation Administration is facing bipartisan outrage. Senators from both parties accuse the agency of "stonewalling" congressional investigators and keeping them "in the dark" in their effort to examine what went wrong in certifying Boeing's troubled 737 Max airplane.

At a Senate Commerce Committee hearing Wednesday on proposed changes to the way the FAA certifies aircraft, Chairman Roger Wicker dispensed with pleasantries and immediately called out FAA Administrator Stephen Dickson and his agency for not turning over many key internal documents more than a year after congressional investigators began asking for them.

"This record of delay and non-responsiveness clearly shows at best, an unwillingness to cooperate in Congressional oversight," said Wicker, a Mississippi Republican. "It is hard not to conclude your team at the FAA has deliberately attempted to keep us in the dark."

Wicker said the FAA's relationship with the committee has turned adversarial, adding that he holds Dickson responsible."I can only assume that the agency's stonewalling of my investigation suggests discomfort for what might ultimately be revealed."

The committee's top Democrat, Sen. Maria Cantwell, whose home state of Washington is where Boeing makes the 737 Max and man its other planes, also criticized Dickson and the FAA for failing to provide documents and allow key FAA employees be interviewed by committee staff.

"I don't want to be stonewalled here," she said.

"I believe it's inaccurate to portray the agency as unresponsive," said FAA Administrator Stephen Dickson in response. "We are going to redouble our efforts (to cooperate). I hear your frustration and that's not OK with me; that's not where we want to be."

'Relationship between FAA and Boeing is too cozy'

The committee is investigating allegations that the relationship between the FAA and Boeing is too cozy, and resulted in a rubber stamp approval when the FAA certified the troubled 737 Max. Two of the planes crashed, in Indonesia in October of 2018 and in Ethiopia in March of last year, killing a total of 346 people, and the commercial jet by regulators around the world ever since.

"Boeing's efforts to push for more self-certification and to push the FAA to move faster and faster to approve the 737 Max, were totally counter-productive and resulted in tragedy," said Democrat Tom Udall of New Mexico. "This continues to be a case study of the complete and total failure of self regulation."

Internal messages and emails between Boeing employees show how the company misled regulators about a new automated flight control system on the plane, and mocked the FAA's oversight. One brags and jokes about "jedi mind tricking" regulators into approving the jets without requiring additional pilot training.

Asked by Texas Republican Sen. Ted Cruz if Boeing lied to the FAA about the flight control system known as MCAS and downplayed safety concerns, Dickson said, "I can't say. Definitely there was incomplete information and fragmented information that was provided, no doubt."

When Dickson acknowledged "mistakes were made," Cruz ripped into Dickson on his use of the passive voice.

"So unknown somebodies made unspecified mistakes for which there were no repercussions," Cruz said. "What mistakes were made and who made them?"

Bipartisan legislation introduced Tuesday by Wicker and Cantwell seeks to strengthen the FAA's oversight of airplane certification, revamping the process and tightening controls over a program that currently has Boeing employees doing much of the safety testing and analysis work.

One change would require the FAA to select the manufacturer's employees for the ODA (Organization Designation Authorization) program, instead of relying on companies like Boeing to pick them.

"Critically, our bill will end any semblance of self-certification," Cantwell said.

Dickson acknowledged in the hearing that, "We need to have strong oversight of the ODA." But he told the senators that changing who selects company insiders to do that safety work "is not something that I believe would add to the safety of the process." He noted that so-called designees already must meet FAA qualifications and are overseen by FAA inspectors, calling it a "trust but verify system."

Sen. Cantwell disagreed, saying, "This is the very point. We need an independent FAA."

Added Connecticut Democrat Richard Blumenthal, "The FAA has to do the work, not just oversee it."

Families of those killed in the two 737 Max plane crashes came away disappointed.

Michael Stumo, whose 24-year old daughter Samya Rose Stumo died in the Ethiopian Airlines crash, was the only other witness who testified at the Senate hearing. He blasted the FAA for allowing the 737 Max to keep flying for five months after the crash of the Lion Air plane in Indoneasia, when the FAA's own analysis predicted more crashes could happen before Boeing could fix the flight control system.

"The first crash should not have happened. The second crash is inexcusable," Stumo, said. "They gambled, we lost."

"Dickson is just full of empty sentiment and empty promises," added 24-year old Zipporah Kuria, whose father, Joseph Waithaka, 55, was killed in the Ethiopian airlines crash on March 10, 2019. "The amount of pain that we feel by the fact that it's been a year after our loved ones deaths and no one has been held accountable."

Kuria and other family members expressed little confidence that the FAA can regain their trust, especially as Beoing works to get the 737 Max recertified this summer.