Accessibility links
'Sigh Of Relief' Or 'Slippery Slope': Advocates and Opponents React To DACA Ruling "I couldn't believe it," says one DACA recipient. "The writing on the wall was that we were all going to be mourning and not celebrating today." Immigration opponents are blasting the decision. 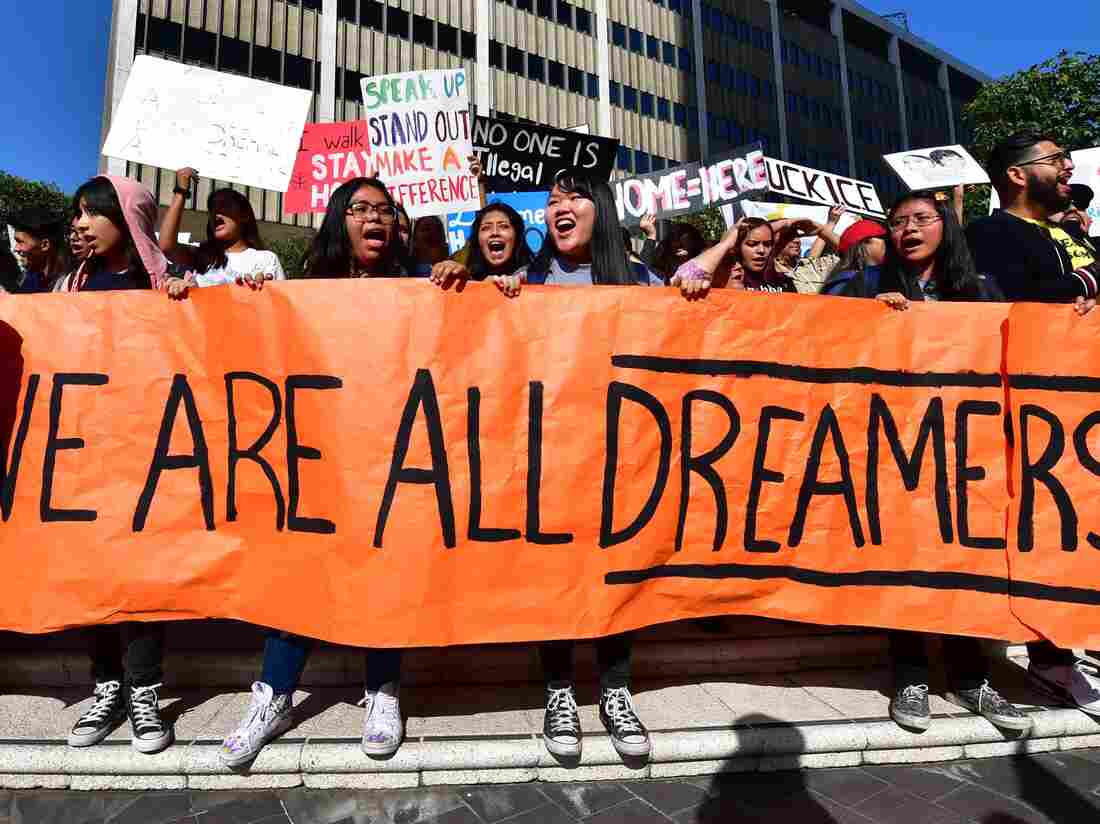 Students and supporters of the Deferred Action for Childhood Arrivals rally in downtown Los Angeles in November while the U.S. Supreme Court heard arguments about the program. The court's ruling Thursday will uphold DACA for now. Frederic J. Brown/AFP via Getty Images hide caption 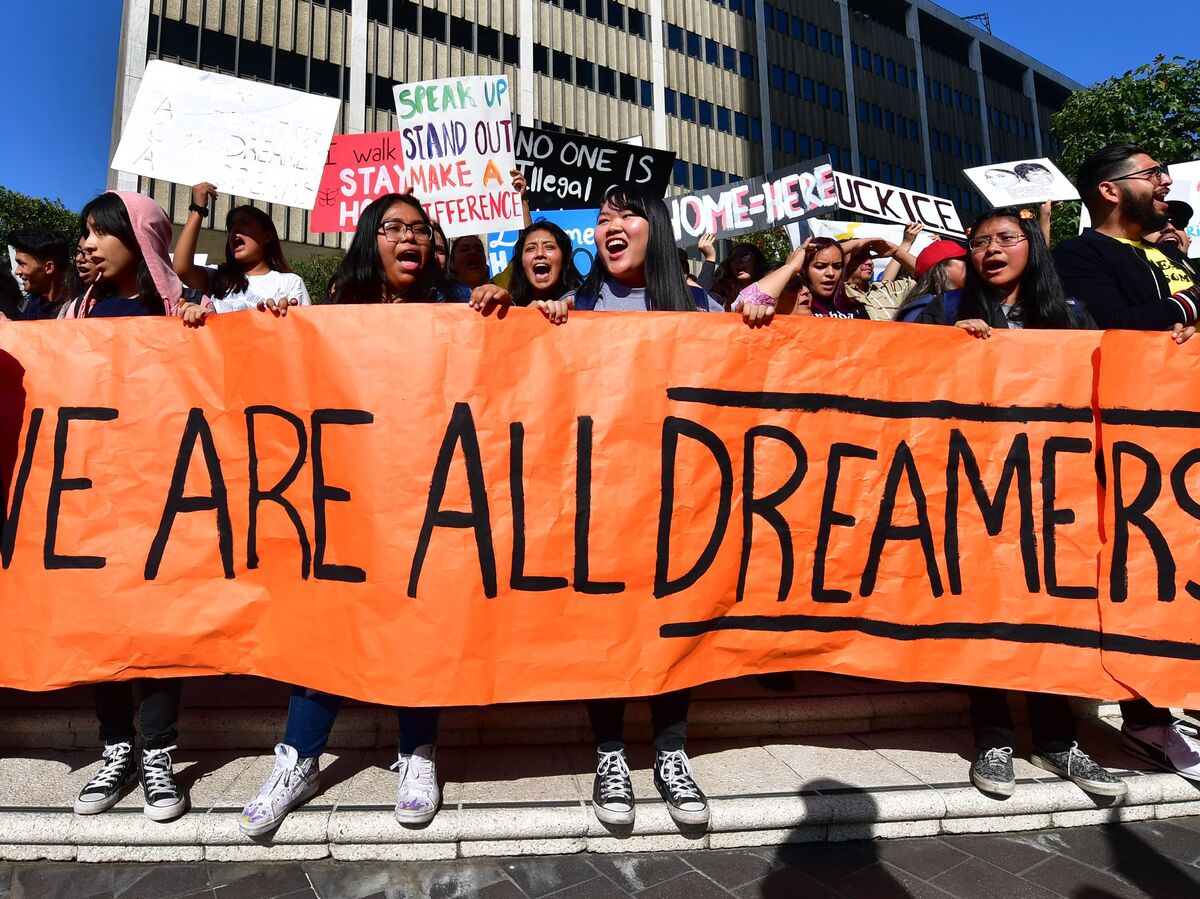 Students and supporters of the Deferred Action for Childhood Arrivals rally in downtown Los Angeles in November while the U.S. Supreme Court heard arguments about the program. The court's ruling Thursday will uphold DACA for now.

The U.S. Supreme Court issued a decision Thursday that extends the life of DACA, the Deferred Action for Childhood Arrivals program. The ruling was a big surprise to many, including DACA recipients who worried they might soon face deportation.

"I couldn't believe it," Emma Chalott Barron, a DACA recipient who will be starting law school at the University of North Texas in the fall, told NPR member station KERA in Dallas.

Barron said that when the decision came down, she ran to check the Supreme Court website. "The writing on the wall was that we were all going to be mourning and not celebrating today."

President Barack Obama announced the program in 2012. It allows people who were brought to the U.S. illegally as children to live and work in the country, but it does not provide a path to citizenship.

In a 5-4 ruling, Chief Justice John Roberts and the court's four liberal justices said the Department of Homeland Security's decision to rescind DACA was arbitrary and capricious.

"I'm happy, I'm super excited," said Josue Tayub, a DACA recipient and nurse who works in the intensive care unit at an El Paso, Texas, hospital. He cared for victims of the mass shooting there in August, and now for COVID-19 patients.

"It feels like I can do what I love to do, what I want to do with my life," he told NPR member station KTEP in El Paso. "For now."

A blow to Trump

The court's decision was a blow to President Trump's effort to end DACA.

"These horrible & politically charged decisions coming out of the Supreme Court are shotgun blasts into the face of people that are proud to call themselves Republicans or Conservatives," Trump tweeted. "We need more Justices or we will lose our 2nd. Amendment & everything else. Vote Trump 2020!"

"Do you get the impression that the Supreme Court doesn't like me?" he added.

"DACA recipients deserve closure and finality surrounding their status here in the U.S. Unfortunately, today's Supreme Court decision fails to provide that certainty," Wolf said in a statement. "The DACA program was created out of thin air and implemented illegally. The American people deserve to have the Nation's laws faithfully executed as written by their representatives in Congress — not based on the arbitrary decisions of a past Administration."

As NPR's Nina Totenberg noted, "The muddled state of play likely prevents the administration from enacting any plans to begin deportations immediately, but there is little doubt that should Trump be reelected, the second-term president almost certainly would seek to end the program."

DACA recipients are a subset of a larger number of people who came to the country as children and are here illegally, often called DREAMers.

There are currently 643,000 DACA recipients, according to recent court documents. More than 825,000 people have had DACA status since the program was created eight years ago, with many holding a different immigration status now.

House Speaker Nancy Pelosi welcomed the decision, saying "it supports our values as a country," and noted that the House already passed a bill addressing the DREAMers.

"What we'd really like, though, is to come together to talk about comprehensive immigration reform," Pelosi said, but she ruled out any kind of legislation that would trade legalizing the DACA recipients for Trump's demands for a border wall.

Immigrant advocates don't necessarily agree that comprehensive reform should be the next step. "[W]e need a holistic approach that won't sacrifice some in order for others to gain," the Refugee and Immigrant Center for Education and Legal Services, or RAICES, said in a statement.

Former Vice President Joe Biden, the Democratic presumptive nominee for president, said that if elected he would work to make DACA permanent, sending a bill to Congress on Day 1 of his presidency.

"As Justice Roberts said, the Trump administration's action was capricious and arbitrary. If Trump attempts to repeal DACA again — an unconscionable action, particularly during this unprecedented public health crisis — he will be responsible for upending the lives of hundreds of thousands of young people and bringing harm to families and communities all across the country," Biden said in a statement.

"We have been living with immense uncertainty"

"We took our power to the streets, the hallways of Congress, to the highest court in the land and we won," said Martín Batalla Vidal, a DACA recipient and activist who is a plaintiff in the case.

"For almost three years we have been living with immense uncertainty, and today we are able to breathe a sigh of relief. Nonetheless, our fight does not end with the decision by the Supreme Court, our fight continues for permanent protection for DACA recipients and all undocumented people."

The court's decision permits the Trump administration to make a second attempt to end DACA protections using proper administrative procedures. That means DACA recipients will continue to be in limbo until a permanent legislative solution is reached.

For now, DACA recipients will continue to renew their permits, which allow them to work legally without fear of deportation.

Polls have found that the majority of Americans support DACA. A Politico/Morning Consult survey conducted in the last week found that 78% of registered voters support allowing DREAMers — young people who were brought to the United States illegally when they were children — to stay.

Opponents "disappointed" and say the ruling is "outrageous"

Texas Attorney General Ken Paxton is one of those frustrated by the ruling.

"We are disappointed with today's SCOTUS decision, but it does not resolve the underlying issue that President Obama's original executive order exceeded his constitutional authority," Paxton said in a statement. "We look forward to continuing litigating that issue in our case now pending in the Southern District of Texas."

The Federation for American Immigration Reform, which advocates for lower levels of immigration, called the court's decision "outrageous."

"Today's ruling by the Supreme Court denying President Trump's rescission of DACA, a program that was implemented by nothing more than a policy memo issued by his predecessor, is an enormous setback for efforts to enforce U.S. immigration laws, as well as for the Constitution's Separation of Powers doctrine," FAIR President Dan Stein said in a statement.

He warned, "[T]he Court essentially imputed the weight of law to an executive policy memo by preventing the current president from reversing that policy and substituting his own policy in its place — one that actually conforms with existing statutes. If presidents can overrule laws with policy memos that are hard to reverse, we are on a slippery slope toward the sort of unchecked executive power our founders feared."

The DACA fight isn't over

RAICES, which provides legal services to immigrant families, called the decision "a much-needed win for our community." But it was circumspect about the work ahead.

"The decision doesn't change anything about who's inside the White House. Despite 70% of the public supporting DACA recipients, the president is still a racist and will continue to use immigrants to advance his xenophobic and hate-filled agenda," the group said.

New York state Assemblywoman Catalina Cruz, who represents part of Queens and who lived in the U.S. for more than 10 years as an undocumented immigrant, said she was still taking in the news.

"I'm so glad the Supreme Court made the right, sound legal decision and the humane decision," she said at a press conference, NPR member station WNYC reported.

"Because for a very long time, let's be real, we didn't think this was going to go this way," Cruz said. "And now what we've got to do is make sure this becomes permanent. This should not be a permanent Band-Aid. That's what it's going to feel like."

She added: "Our dreamers, our parents deserve a permanent solution."