Accessibility links
David Litt Proposes Solutions To U.S. Government Ills In 'Democracy In One Book Or Less' David Litt, former speechwriter to President Obama and author of Thanks, Obama, refreshingly debunks myths about our founders, pointing up false narratives and warped historical perceptions.

'Democracy In One Book Or Less' Proposes Solutions To U.S. Government Ills

'Democracy In One Book Or Less' Proposes Solutions To U.S. Government Ills 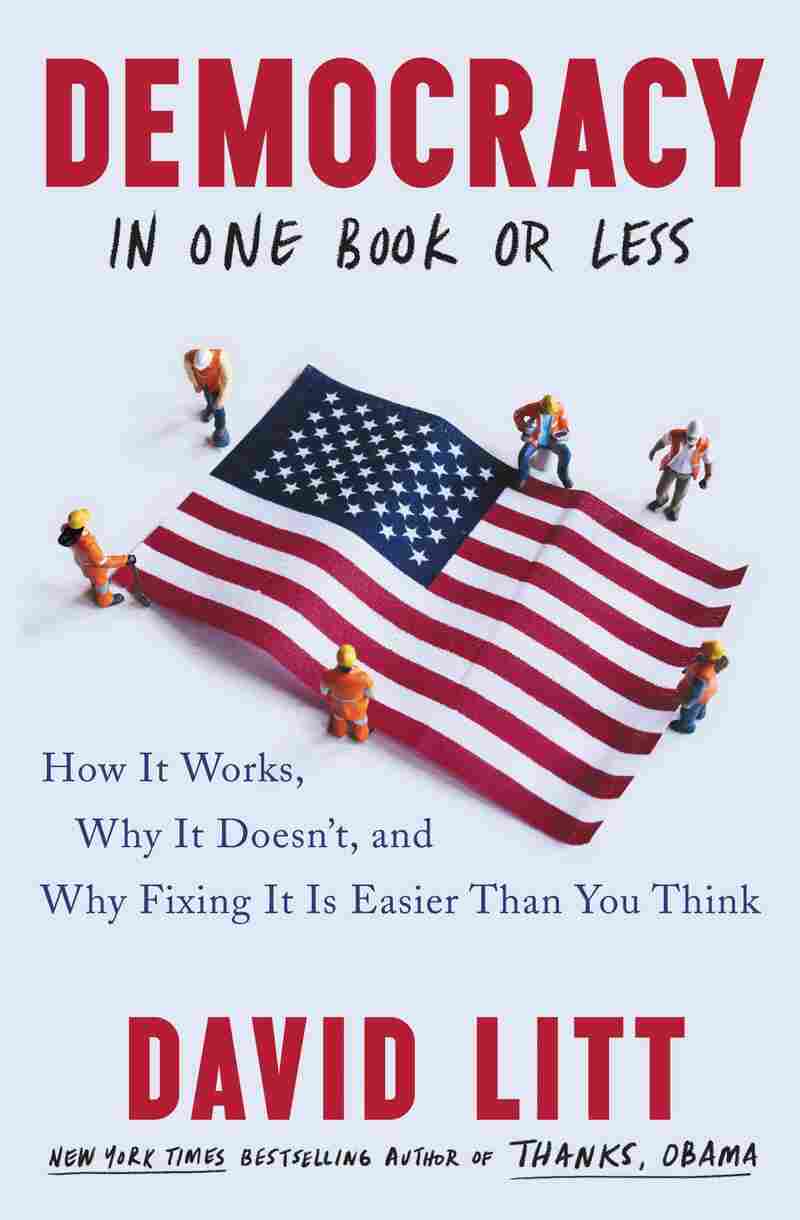 Democracy in One Book or Less: How It Works, Why It Doesn't, and Why Fixing It Is Easier Than You Think, by David Litt Ecco hide caption 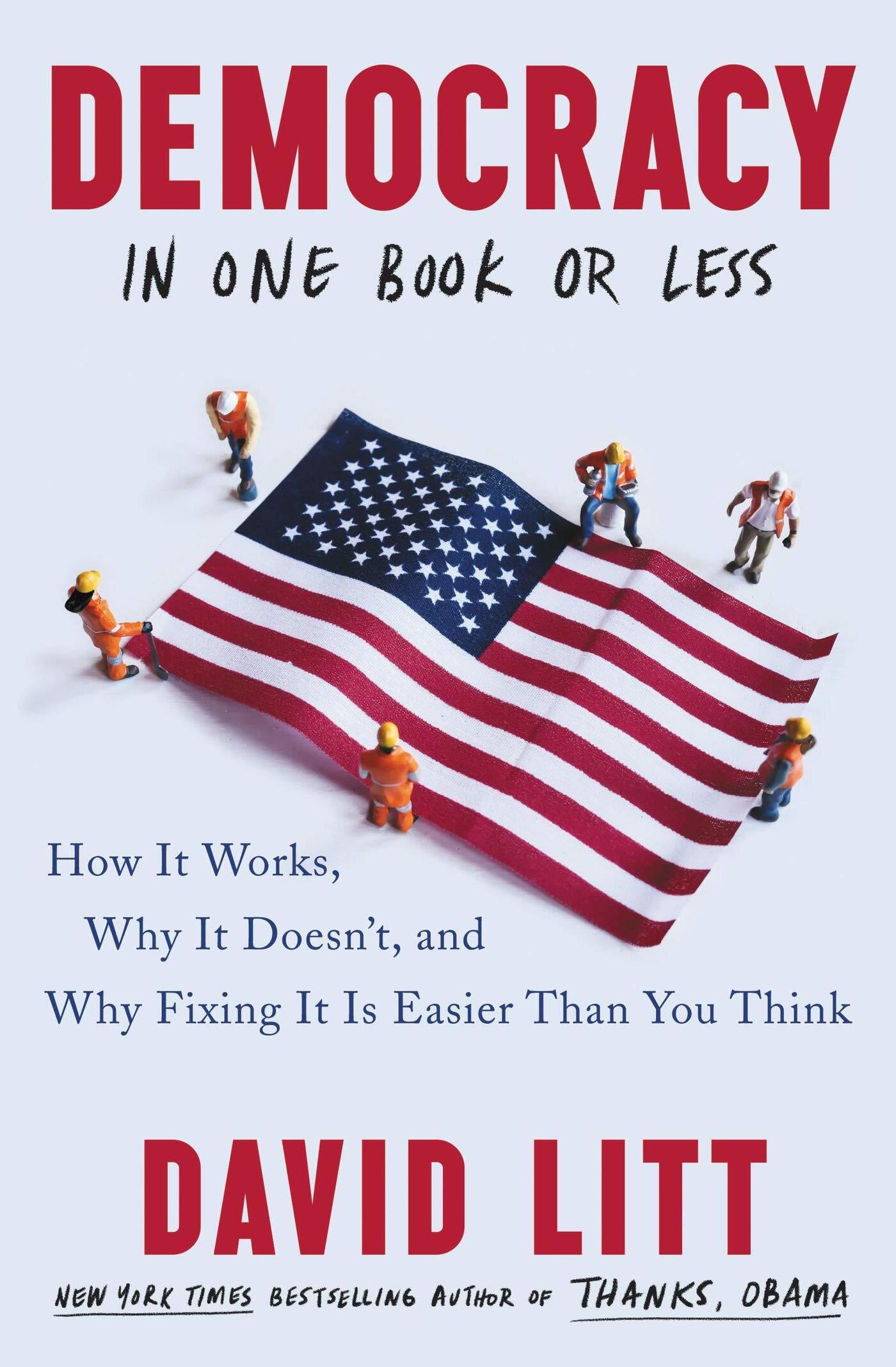 Democracy in One Book or Less: How It Works, Why It Doesn't, and Why Fixing It Is Easier Than You Think, by David Litt

Our twin pandemics in the forefront at the moment — racism and health — underscore a democracy in crisis.

David Litt, author of Thanks, Obama and a speechwriter for the 44th president, has a prescription: Democracy In One Book Or Less: How it Works, Why It Doesn't, and Why Fixing It Is Easier Than You Think. Litt refreshingly debunks myths about our founders, pointing up false narratives and warped historical perceptions. He is explicit on the calamitous risks of a widening income gap that concentrates power in the one percent. The racism that erodes our democracy bears repeating as well, and loudly.

Writing in breezy, digestible prose, Litt opens with Senate Majority Leader Mitch McConnell. Until President Trump, "no politician ... has so openly treated accumulating power as a sport," Litt writes. McConnell's political ideal: Constituents have nothing to do with it.

Litt presents statistics that prove our democracy is ill: Since 1980, the number of Americans legally barred from voting has more than doubled. Since the 1990s, the odds of living in a competitive congressional district have fallen by half. Since 2000, money spent on lobbying in Washington has risen by 100 percent.

Democracy In One Book Or Less explores egregious injustices throughout our system and proposes solutions. Voting inequities serve as illustration. Contrary to common perceptions, nonvoters are not "couch potatoes," abjuring their civic duties.

Litt discusses Rick Scott, a white man who ran a Florida hospital system that committed massive Medicare fraud. The Justice Department obtained a $1.7 billion settlement from the company but charged no executives. Litt then considers Ricky Scott, a black man charged with "grand theft" in Florida, which can be something as trivial as removing a fire extinguisher from a wall. The white man is the junior senator from Florida following two terms as governor; the black man was found guilty of a felony and barred from voting for life.

Before 2006, no state required an ID to vote. Today, Litt says, 17 states do. In Tennessee, a voter with a gun permit can vote, while a student using a University of Tennessee ID cannot. ID laws, however, aren't the biggest problem. Voter "purges" result in glaring injustices.

A chapter outs the "godfather of the modern purge," Hans von Spakovsky, former member of the Federal Election Commission and the Republican party's standard bearer for shrinking the electorate. Litt spotlights Georgia Secretary of State Brian Kemp, the white gubernatorial candidate who happened to be the state official in charge of voting, as responsible for purging 1.5 million names from the rolls under a new "Use It or Lose It" rule he put into place.

Moreover, Litt recounts, on election day 2018, Fulton County, which includes much of metro Atlanta (read, African American), locked up a quarter of its voting machines. Abrams "lost" by 55,000. It is an ugly truth that in red and blue states alike, "The less white your neighborhood, the longer you wait," Litt writes.

We don't have to have million of adults legally barred from voting. Litt offers solutions, showing their success in other countries. He suggests we automatically register voters as soon as they turn 18; help disabled people get to the polls; vote by mail so people don't miss work, or, in the age of pandemic, risk their health. He notes we can vote on weekends, when it's easier for low-wage workers, and abolish voter ID laws because despite false claims by President Trump, voter fraud is virtually nonexistent.

The franchise can and has been expanded. Litt reports that 40 states have allowed non-citizen immigrants to vote at one time or another, but not since 1926. He believes there's no reason why long-term undocumented people shouldn't be allowed to vote, to say nothing of greencard holders.

Litt examines the flaws of the Electoral College, which can result in the winner of the popular vote losing the presidency, as happened with Presidents George W. Bush and Donald Trump. Although the Electoral College is constitutionally mandated, there are ways to fix it.

Using Las Vegas mogul Sheldon Adelson as an example, Litt probes the evils of money in politics. "Dark," unreported money donated to candidates of both parties severs them from constituents, making them accountable only to their wealthiest donors. Although a majority of Americans care deeply care about a range of issues, including gun control and curbing global warming, politicians can not only ignore, but also escalate these problems with impunity.

Here's Litt on the Trump administration, where there is no daylight between official government and special interests: A coal-mining lobbyist was appointed to run the Environmental Protection Agency, an oil-and-gas lobbyist the Interior Department, a banking lobbyist the Labor Department, and a steel industry lobbyist to serve as U.S. Trade Representative.

The book has a long section on the negative impacts of gerrymandering congressional districts and ends with the challenges of getting a bill through Congress, two phenomena that are not unrelated.

The good news is that there isn't space to describe most of Litt's proposed solutions. Democracy In One Book Or Less is a no-nonsense guide for how we, the people, can fix ourselves. In the words of Abraham Lincoln, "Democracy is direct self-government over all the people, for all the people, by all the people."

Martha Anne Toll's writing is at www.marthaannetoll.com, and she tweets @marthaannetoll. She was the founding executive director of the Butler Family Fund.