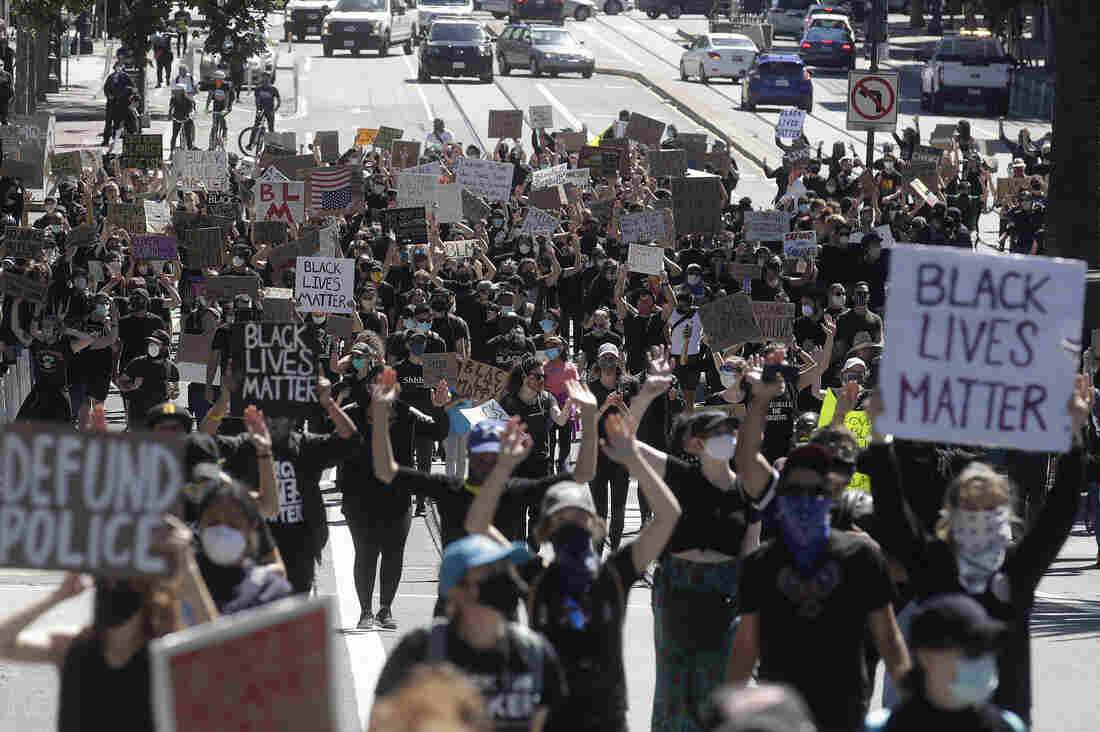 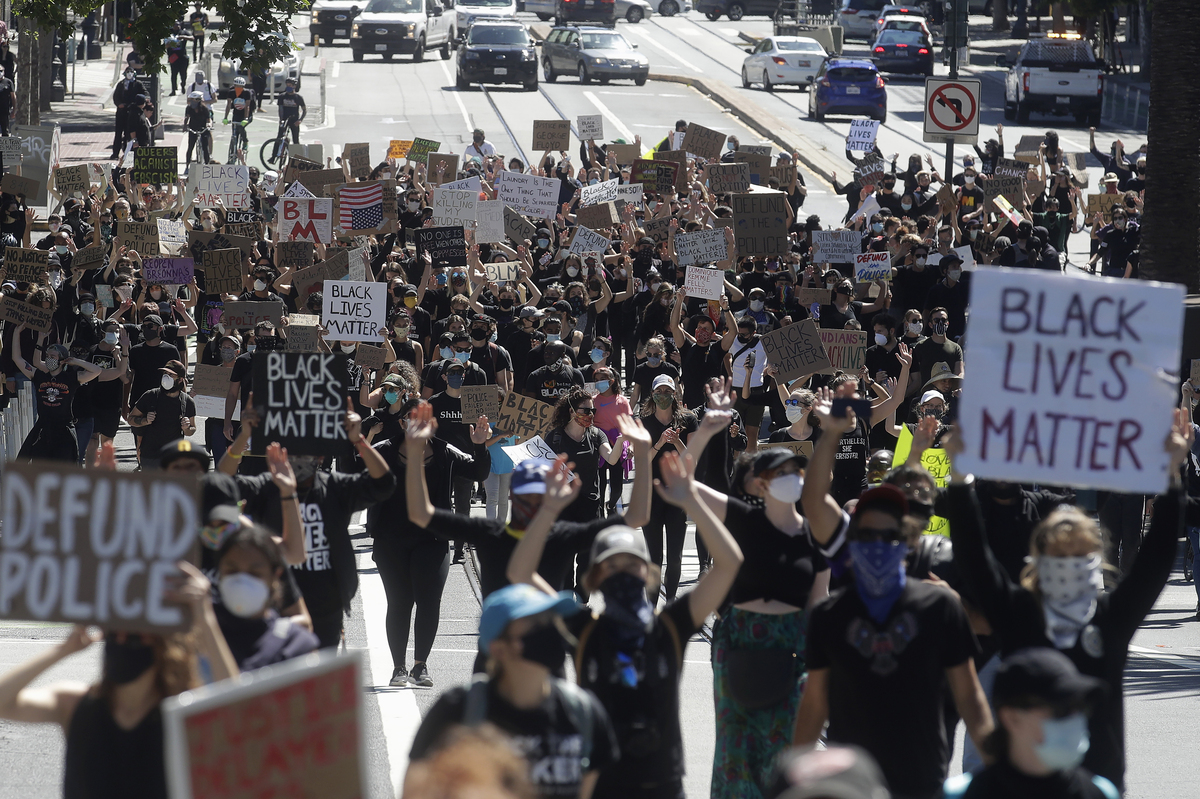 People raise their arms while marching on Market Street in San Francisco. As tech companies write statement and pledge money to address racial inequity, some Black tech workers are urging for more fundamental changes in the industry.

Big Tech companies — Apple, Google, Amazon and Facebook — are writing mega checks to organizations like the NAACP and the Brennan Center for Justice. Twitter, TikTok, Spotify and Lyft have all declared Juneteenth a paid holiday.

As the tech industry joins the growing national chorus supporting greater racial equality in society, some Silicon Valley Black workers are responding with a degree of hesitation.

For one, it's about time, says Y-Vonne Hutchinson, a diversity consultant in the San Francisco Bay Area. But more than that, the soul-searching the tech industry needs to commit to on race issues involves more than positive words and dollar signs, she says.

The chronic problem, Hutchinson says: white men have long dominated the seats of power in tech, and they often draw from their own networks to make hires. And so, making inroads in tech can prove daunting for Black workers and other people of color.

Google's workforce, for instance, is just 3% Black and just 9% of Apple employees are Black. It is a pattern widely seen in small tech startups and in the venture capital world.

Just 1% of startup founders who received venture capital money are Black, according to one study that examined data from 10,000 founders and 135 of the most active venture capital firms in the world.

The effort to start reversing the racial equity problem in tech is long overdue, arriving after years of built-up exhaustion, some Black workers in Silicon Valley have observed.

"I think the biggest reason folks are skeptical is that Black folks are tired," says Evelyn Carter, the director of training at Paradigm IQ.

"These folks have likely been championing diversity, equity and inclusion, have been begging their managers to give them opportunities in the same way their white colleagues have for a very long time now," she says.

Changing this, Hutchinson said, means hiring more Black people by recruiting from Black communities and widening the search for every open position.

The catch phrase, "make the hire, send the wire," has become a slogan on Twitter among Black tech workers in recent weeks.

This weekend in replying to @Bryce, I coined the phrase "Make the hire. Send the wire." as what tech needs to do differently now. Some folks wanted that on a shirt.

But building a more diverse workforce is just the beginning, Hutchinson notes, as deeply ingrained traditions and norms in tech have created a code of conduct that can be inhospitable to people of color, she said.

"Silicon Valley still has this idea of culture fit, which is incredibly nebulous," she said. "What does it mean to fit into a culture? But it does work to exclude people."

Aniyia Williams, executive director of Black and Brown Founders, says there are many ways in which tech culture can be exclusionary.

"It might be about how people get defensive ... or that there's only way way to do things, or credentialing people, saying they can't get this position because they don't have the right degree," she says.

Williams says that while it is encouraging that tech is now engaging in earnest about systemic race barriers in the industry, it is far from a new problem.

To Black tech workers, this moment of reckoning about racial equity is like a blinding light suddenly being flipped on in a dark room, she says.

"The rest of us, Black folks especially, we've been living in this bright room for a very long time," Williams says.

Tech pledges as opportunity for accountability on race

Well-funded tech companies have in recent days made some bold promises.

Google CEO Sundar Pichai has committed to diversifying leadership 30% in the next five years. He said parent company Alphabet will be giving $175 million to Black businesses.

Facebook's chief operating officer Sheryl Sandberg made a similar announcement with a pledge of bolstering its share of employees from underrepresented groups and pledging a $1.1 billion investment in Black suppliers and businesses.

Airbnb said on Thursday that 20% of its Board of Directors and executive team will be people of color by the end of next year.

Carter of Paradigm IQ, which helps tech firms be more welcoming to people of color, finds herself more optimistic than those who roll their eyes at such pronouncements. She said the moves should be seen as more than just vows of allyship or performative stunts.

"For those who are calling it racial theater, I think what we're missing is that there's an opportunity to say, 'well if an organization is putting out a statement saying where they say Black Lives Matter, then you can hold them accountable,'" Carter said.

A list has been circulating among Black tech workers documenting every statement from tech companies in support of George Floyd, Black Lives Matter and racial justice. That list is already more than 200 entries long.

"In five or six years, your company should look fundamentally different because you've listened to your Black employees, you have done the hard work to make sure you are recruiting, retaining and promoting a diverse group of talent," Carter says.

So when Apple's CEO Tim Cook writes that the company is reexamining its views and actions "in light of a pain that is deeply felt but too often ignored," Williams says she's going to make sure that examination doesn't stop.

"I don't think anyone is expecting to wake up tomorrow in a post-racial world," said Williams of Black and Brown Founders. "But we need to make sure these companies are making these moves in good faith and they need to be open to being held accountable."