Accessibility links
No Reinstatement, Not Now Nor In Future For Fired Carrier Commander Brett Crozier was initially recommended to retain command of an aircraft carrier after being removed for protesting the Navy's response to the virus on the ship. The Navy now says he won't go back.

In A Reversal By Navy, Sacked Captain Of USS Roosevelt Will Not Be Reinstated

In A Reversal By Navy, Sacked Captain Of USS Roosevelt Will Not Be Reinstated 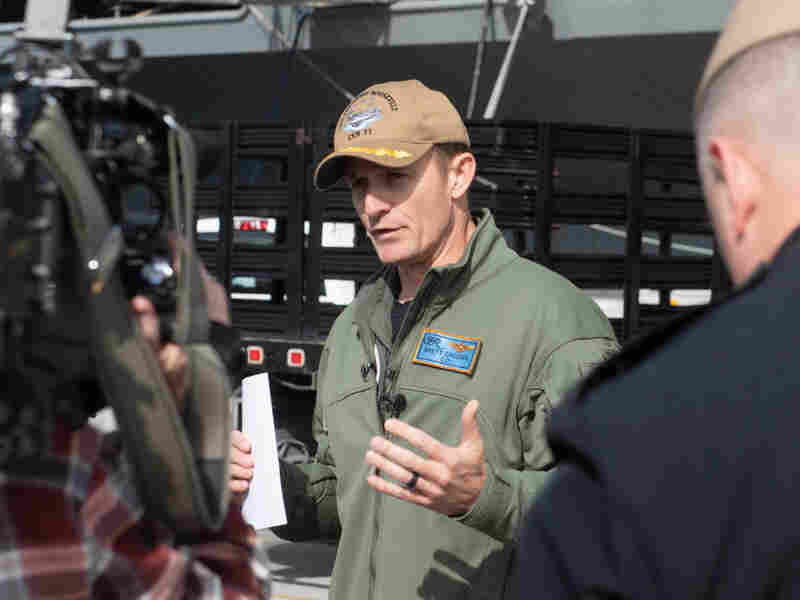 Capt. Brett Crozier, then-commanding officer of the aircraft carrier USS Theodore Roosevelt, talks to reporters in January. The Navy has decided not to restore him to command. U.S. Navy via Getty Images hide caption 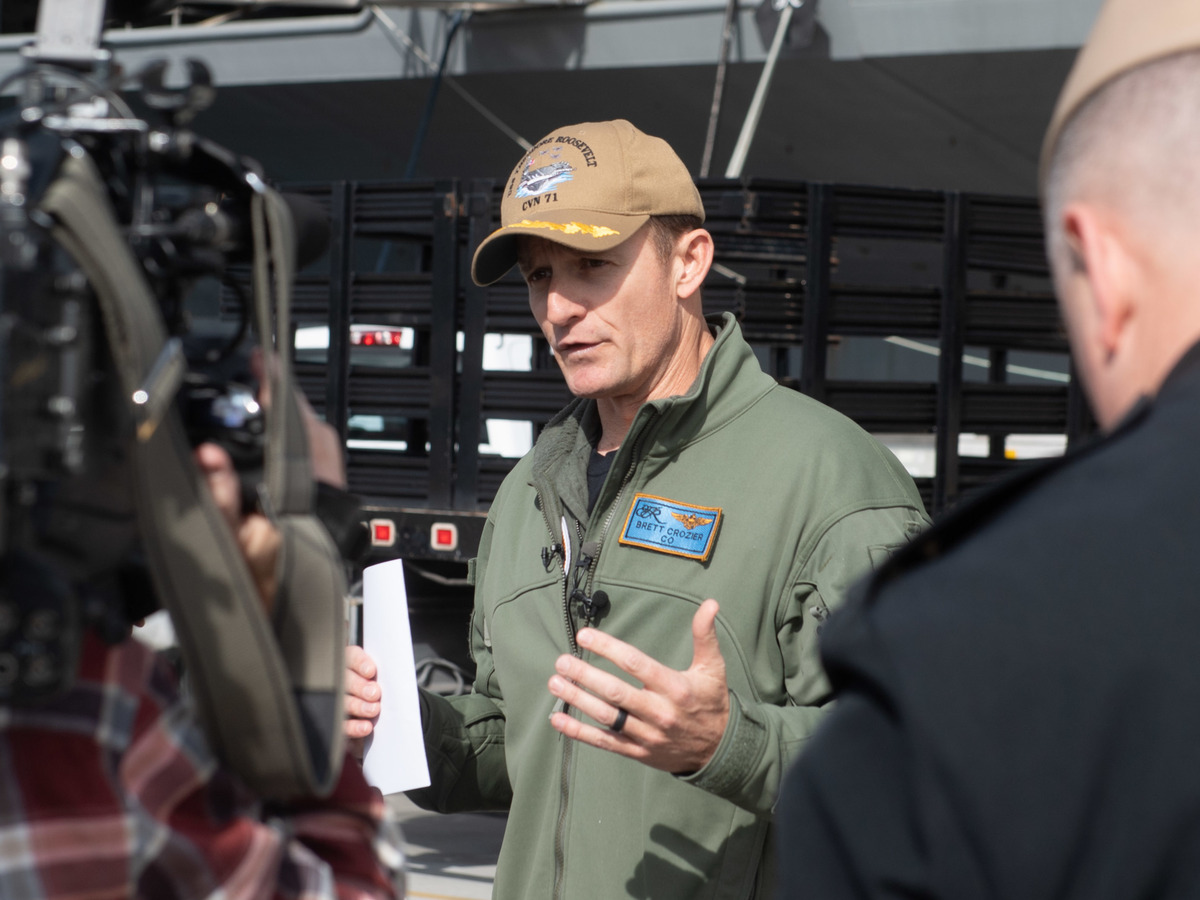 Capt. Brett Crozier, then-commanding officer of the aircraft carrier USS Theodore Roosevelt, talks to reporters in January. The Navy has decided not to restore him to command.

U.S. Navy Capt. Brett Crozier, who raised alarms in late March about a serious coronavirus outbreak aboard the nuclear-powered aircraft carrier he commanded, will not be reinstated after being stripped of that command post.

"I will not reassign Capt. Brett Crozier as the commanding officer of the USS Theodore Roosevelt, nor will he be eligible for future command," Adm. Michael Gilday, chief of naval operations, declared Friday at a Pentagon news conference, adding that Crozier would be reassigned.

Also facing sanctions is Rear Adm. Stuart Baker, the commander of the aircraft carrier's strike group, whose Senate-confirmed promotion to a second star has been put on hold.

After having concluded from a preliminary inquiry that Crozier should be returned to his command post, Gilday said his review of a much broader subsequent investigation led him to a judgment that both Crozier and Baker "fell well short of what we expect of those in command."

Gilday did not cite as grounds for his decision the anguished email Crozier sent decrying a slow response by the Navy to the outbreak aboard the Roosevelt, a missive that leaked and was published within a day by the San Francisco Chronicle.

"Capt. Crozier hit send once on that email," Gilday said. "Capt. Crozier did not leak that email, or intend for it to be leaked. So at that time, I felt that the facts did not justify relief, based on the narrow scope."

The broader review, which was requested by then-acting Navy Secretary James McPherson, found what Gilday described as actions by Crozier and Baker that put the crew's comfort above their safety.

"They did not do enough soon enough to fulfill their primary obligation, and they did not effectively carry out our guidelines to prevent spread of the virus," Gilday told reporters. "They were slow egressing sailors off the ship, and they failed to move sailors to available, safer environments quickly."

The Navy chief also said Crozier exercised "questionable judgment" by releasing sailors from quarantine on his ship, an action Gilday said put the crew at higher risk "and may have increased the spread of the virus aboard the Theodore Roosevelt."

More than 1,100 of the warship's crew of about 5,000 ultimately tested positive for the coronavirus, including Crozier; one of those sailors died. Many crew members were removed from the ship at dockside in Guam and kept in isolation there in hotel rooms and other accommodations arranged by the Navy.

Gilday insisted that Crozier had failed to take into account what the Navy was doing to address the outbreak.

"In the end, the email and letters sent by Capt. Crozier were unnecessary," he said. "Actions were already underway to acquire CDC-compliant off-base hotel rooms for the crew before he sent that email."

Gilday said the second investigation had concluded that a port call in Vietnam was the likely source of the ship's infection, but he did not fault Adm. Philip Davidson, who heads the Indo-Pacific Command, for having approved that stop in Vietnam.

"We did not make a decision to make that port visit until a day before," Gilday said. "We exhausted several means and sources of information before we made the determination to put that ship into port."

In the end, Gilday said, it was Crozier's failure to convey his concerns up his chain of command that persuaded him the captain should not be put back in command of his ship.

"As bad as I feel for Capt. Crozier and Adm. Baker and their families, I've got a responsibility to put the best people possible on a ship that is now operating in the Philippine Sea with two other strike groups," Gilday said. "I need people gripping problems, I need them driving solutions, I need them communicating fearlessly."

At his side stood newly sworn-in Navy Secretary Kenneth Braithwaite, who has barely been three weeks on the job. Asked how he planned to heal a relationship between the Navy's leaders and its sailors that has been battered by this episode, Braithwaite called it a matter of showing "steady and firm leadership."

"I can tell you that the morale of the men and women is very good," the Navy's top civilian said, citing visits he's made to two other aircraft carriers this month. "I think we can put some of these incidents behind us, especially now that we've concluded this; we can move on."

The Navy's decision not to reinstate Crozier drew criticism from Rep. Adam Smith, the Democratic chairman of the House Armed Services Committee.

"Everyone up and down the chain of command had a role to play in the inadequate response – including then-Acting Secretary of the Navy [Thomas] Modly," Smith said of the former Navy official who fired Crozier before stepping down himself. "The department's civilian leadership portrayed Capt. Crozier's decision-making aboard the Roosevelt as the critical weakness in the Navy's response, but the truth is that civilian leadership was also to blame."

Smith said his committee has launched its own investigation into the outbreak aboard the Roosevelt "to better understand the full range of mistakes that were made throughout the entire chain of command."