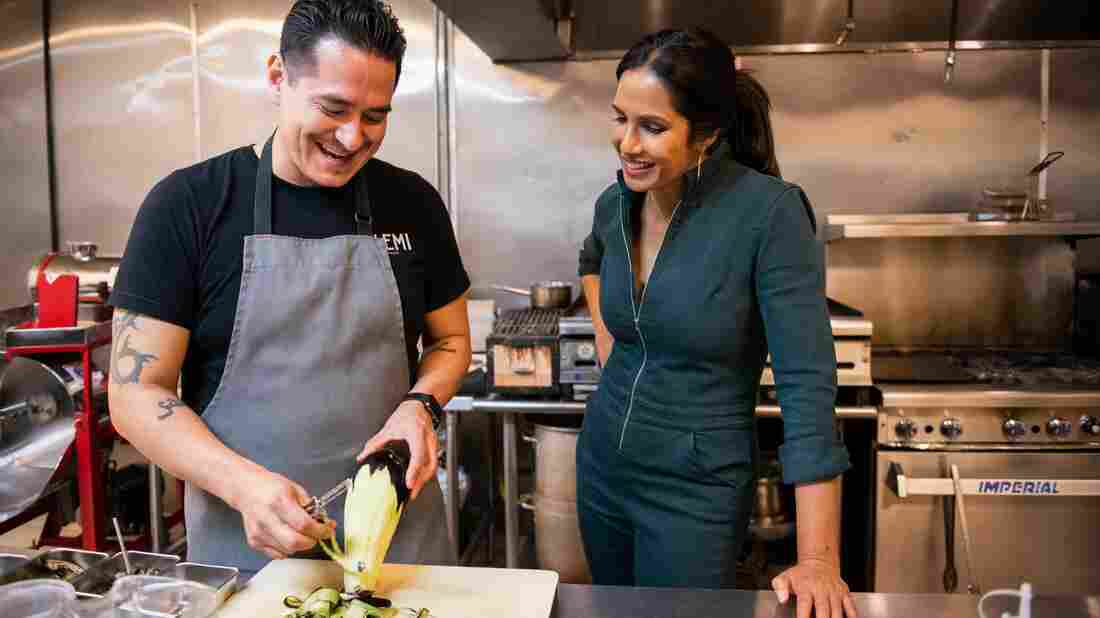 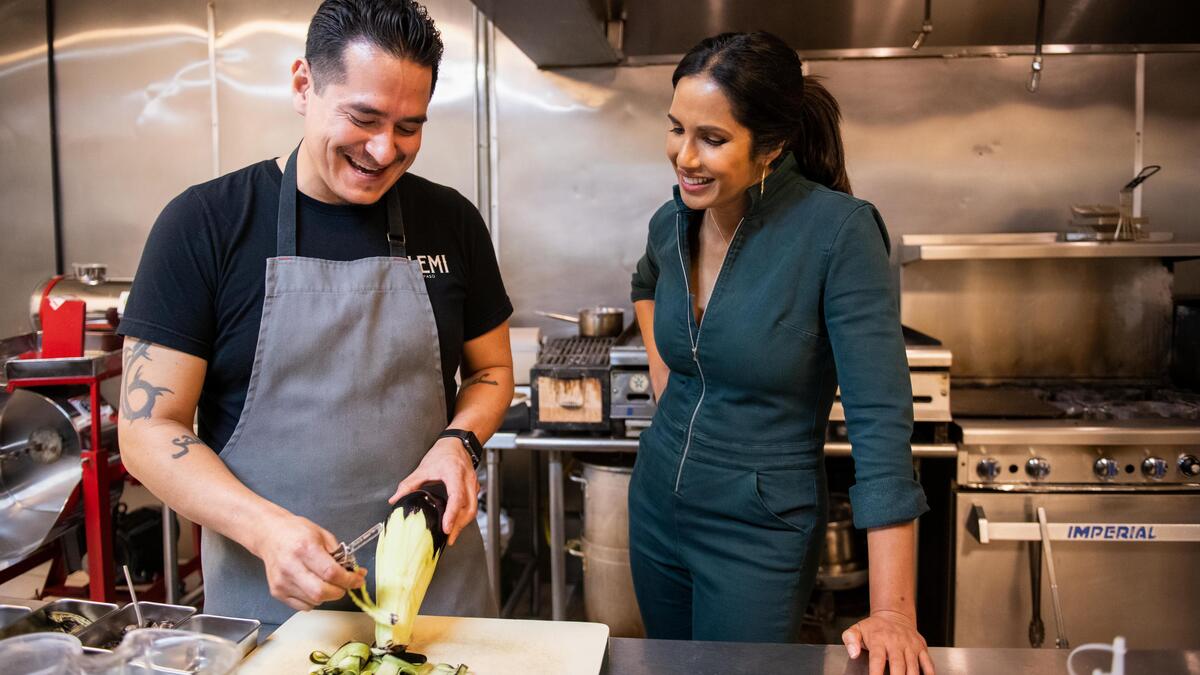 Padma Lakshmi — the host of the cooking competition Top Chef — is on a new gastronomical journey, taking her to places you've probably heard of, like Chinatown in San Franscisco, and others you may not, like Little Lima in New Jersey.

The new show is called Taste the Nation, and Lakshmi does not shy away from the complicated history and politics that remind us who is really at the center of our favorite "American" dishes: immigrants.

Lakshmi says her work on immigration rights inspired the show. "I started working together with the American Civil Liberties Union just after the election, shortly after the Muslim ban and the family separation at the border started," she says. "And I'm an immigrant. I came to America when I was four from India. And so this is obviously an issue that's very personal to me. So I wanted to find out about other immigrants. And I started getting deeper and deeper involved. And it seemed to me food would be a great way to get into these communities ... I wanted to reflect my point of view as a woman, as a person of color, as a mother, but also be about more than just the food. The food is really just the excuse to embed myself."

On the mix of chefs she talked to

I wanted to show that immigrants are not people you should be threatened by. They're not dirty, nothing. And you know that, because you order takeout from them all the time.

I went everywhere, they would let me in, basically. I mean, most of the professional food world is dominated by white men, but most of the food in our world is actually cooked by women, you know. And so there's a real disconnect between professional food and food at our tables. And I wanted to look at both. And ... even those big chefs, they learned from their mothers and their grandmothers. So I wanted to look at the origins of that.

You know, the reason I got into immigration rights is because I heard a lot of rhetoric about immigrants and a lot of negativity that really didn't square with how I grew up, and my daily life and my community, or how I viewed immigrants even now. And this is my rebuttal. You know, I wanted to show that immigrants are not people you should be threatened by. They're not dirty, nothing. And you know that, because you order takeout from them all the time.

On her own story

My mother had come here when I was two and I was back in India being raised by my grandparents. And so when I came to New York City, I landed in JFK alone, and I actually arrived on Halloween night. And so my mother, you know, took me back to her little apartment on the Upper East Side of New York. And she had a big platter of candy by the door. And I thought that she'd put that out in celebration of being reunited with me. And the door kept ringing and she would open the door and I would see all these kids dressed up — at what I perceived to be street performers in costume — and they would hold out their bag. And my mother would take what I thought was my candy and put it into their bags. And I thought, what a wonderful tradition, what a wonderful country, where all you have to do is dress up and jump around a little and an adult will give you candy. You know, whether they know you or not.

But, you know, immigrants, or children of immigrants always occupy this third space. I could never be American enough for my peers, or just to blend in for auditions or jobs when I started my career, and I couldn't often be Indian enough when I went to see Indian family, you know, if I dressed too American, or my skirt was too short or I didn't have a bindi on. So there is that discomfort. And there's a lot of code switching. And I don't think that ever went away until very recently.

This country is mighty because of its immigrant labor. It has been refreshed and renewed over generations, culturally, economically, because of the influx of different waves of immigration.

Yes, I think it just shows you the unbearable whiteness of our culture. You know, I think it shows you how we ... like to think of ourselves as not racists at all. But I think there is kind of an unconscious bias there that they can't help but have, because they've grown up in this society. You know, just like people of color have. And that's a whole other issue too, this kind of internalized self-loathing that's very subtle and insidious that, you know, you've almost accepted and resigned yourself ... to being inferior, to being owed less opportunity than than others.

And also, I think the most egregious thing that happened at Bon Appétit was ... the unfair treatment of their employees. And the discrepancy in compensation that needs to change. Plus, if you ask me, just from a hard-nosed business point of view, ethnic food in this country is where the action is at. That is what makes American food dynamic. And frankly, even possible. I think that these editors and publishers need to look at a whole swath of people who want to see themselves — including me, by the way — in magazines, in newspapers, and want to see our food celebrated because the numbers indicate that there is good business to be had from us.

I love the kebabs at Shamshiri Grill in Westwood, California. I love anything from that Iranian restaurant. It's wonderful if you're ever in Los Angeles. Go to Shamshiri Grill. You know, I enjoyed the ceviche from Erik Ramirez right here in Brooklyn, which was a revelation to me. And you know, what I would say is, I designed this show not for people who think like me, not people who are necessarily gung-ho about immigration policy, but for people who are against it. This country is mighty because of its immigrant labor. It has been refreshed and renewed over generations, culturally, economically, because of the influx of different waves of immigration. And that's important to note.

This story was edited for radio by Sophia Boyd and Barrie Hardymon, and adapted for the Web by Petra Mayer.