Accessibility links
'Like Poking a Beehive': The Worrisome Link Between Deforestation And Disease Scientists say accelerating deforestation and development may increase the risk of pandemic diseases. The current economic crisis may also make that trend worse if more people cut down trees for fuel.

'Like Poking a Beehive': The Worrisome Link Between Deforestation And Disease

'Like Poking a Beehive': The Worrisome Link Between Deforestation And Disease 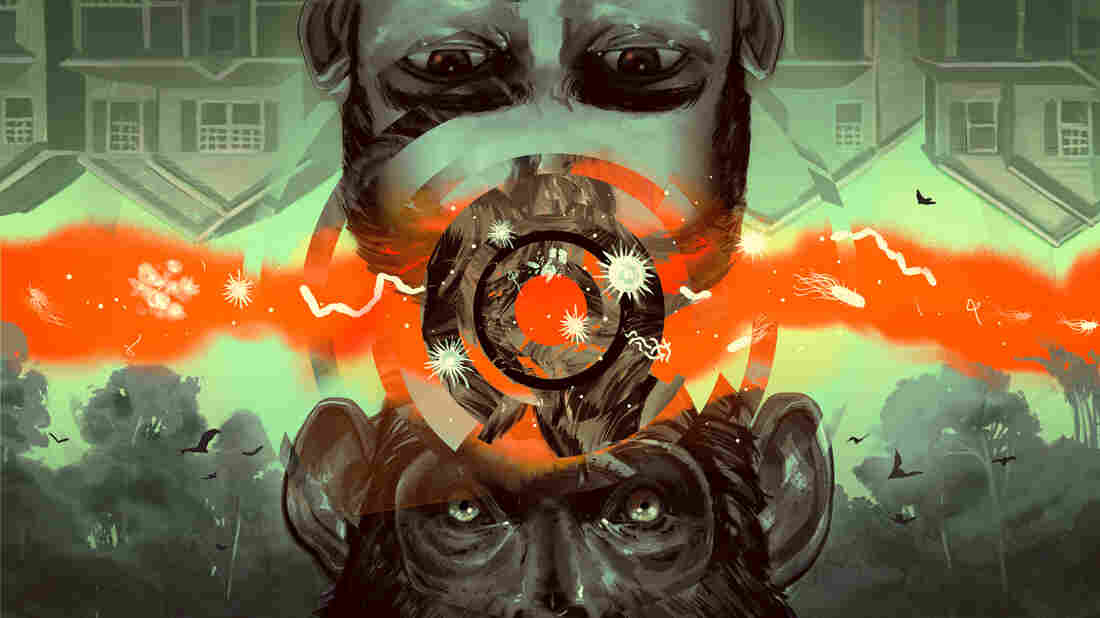 The closer humans are to animals, the greater the opportunity for zoonotic spillover, where a pathogen jumps from animal to human. Zoë van Dijk for NPR hide caption 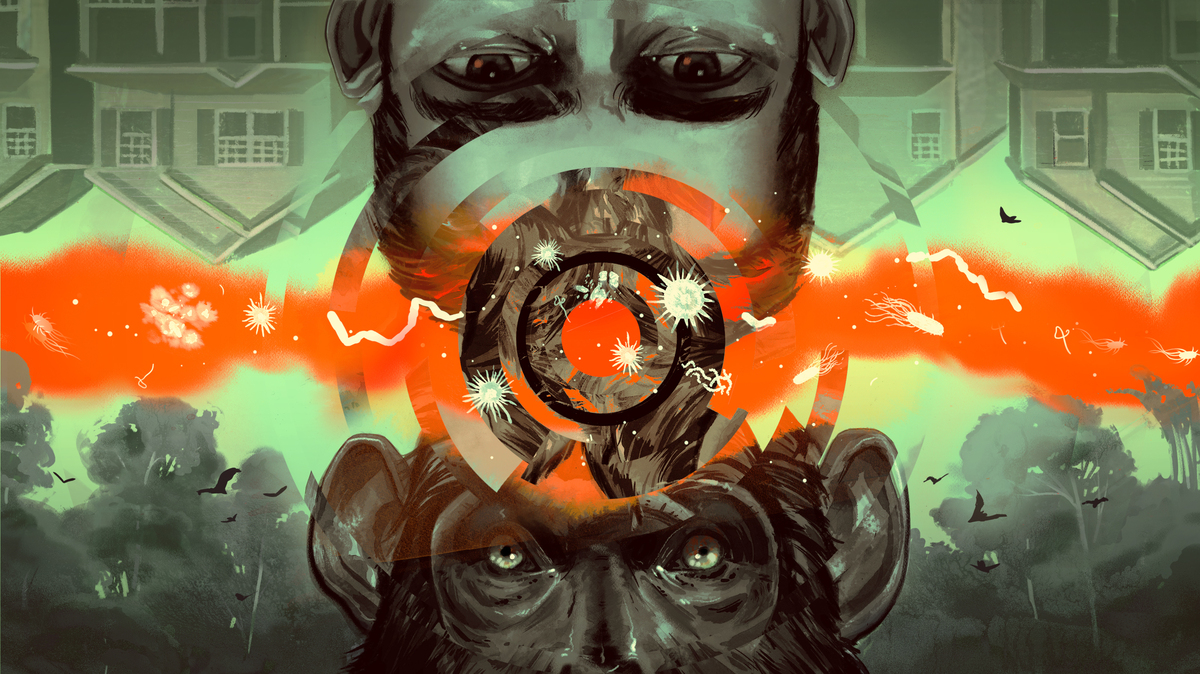 The closer humans are to animals, the greater the opportunity for zoonotic spillover, where a pathogen jumps from animal to human.

In 2013, an 18-month old boy got sick after playing near a hollow tree in his backyard, in a remote West African village. He developed a fever and started vomiting. His stool turned black. Two days later, he died.

Two years and more than 11,000 deaths later, the World Health Organization put out a report saying the Ebola outbreak that likely emanated from that hollow tree may have been caused in part by deforestation, led by "foreign mining and timber operations."

The tree the boy played near was infested with fruit bats — bats that may have been pushed into the boy's village because upwards of 80 percent of their natural habitat had been destroyed.

"When you disturb a forest, it actually upsets, if you want, the balance of nature, the balance between pathogens and people," says John E. Fa, a professor of biodiversity and human development at Manchester Metropolitan University, who was part of a team of researchers that linked recent forest loss to 25 Ebola outbreaks that have occurred since 1976.

A finding, he says, that showed a strong correlation between recent deforestation and disease outbreaks.

Scientists have long warned that the reshaping of Earth's landscapes will have broad ramifications for the climate and biodiversity. A growing body of evidence shows that forest loss and fragmentation can also increase the risk of animal-borne infectious disease, similar to the type that's currently upending the world.

Health experts say that the novel coronavirus, which has killed nearly half a million people worldwide, originated in an animal. Likely, a bat. And while it's too soon to know whether deforestation or land-use change played any role in its path to becoming a global pandemic, there are concerns that the economic ruin it's leaving behind could help set the stage for future pandemics.

There have been reports of increased deforestation in Southeast Asia, Africa and South America in the last few months, as governments have eased regulations and directed their resources and attention towards coronavirus response.

"The perception that people are getting from the media is that nature is getting a break from the virus," says Edward Barbier, a distinguished professor in the Department of Economics at Colorado State University. "However, what's happening in tropical forests in particular is basically a field-day for illegal activities."

A field-day, he says, that could increase the risk of future outbreaks. 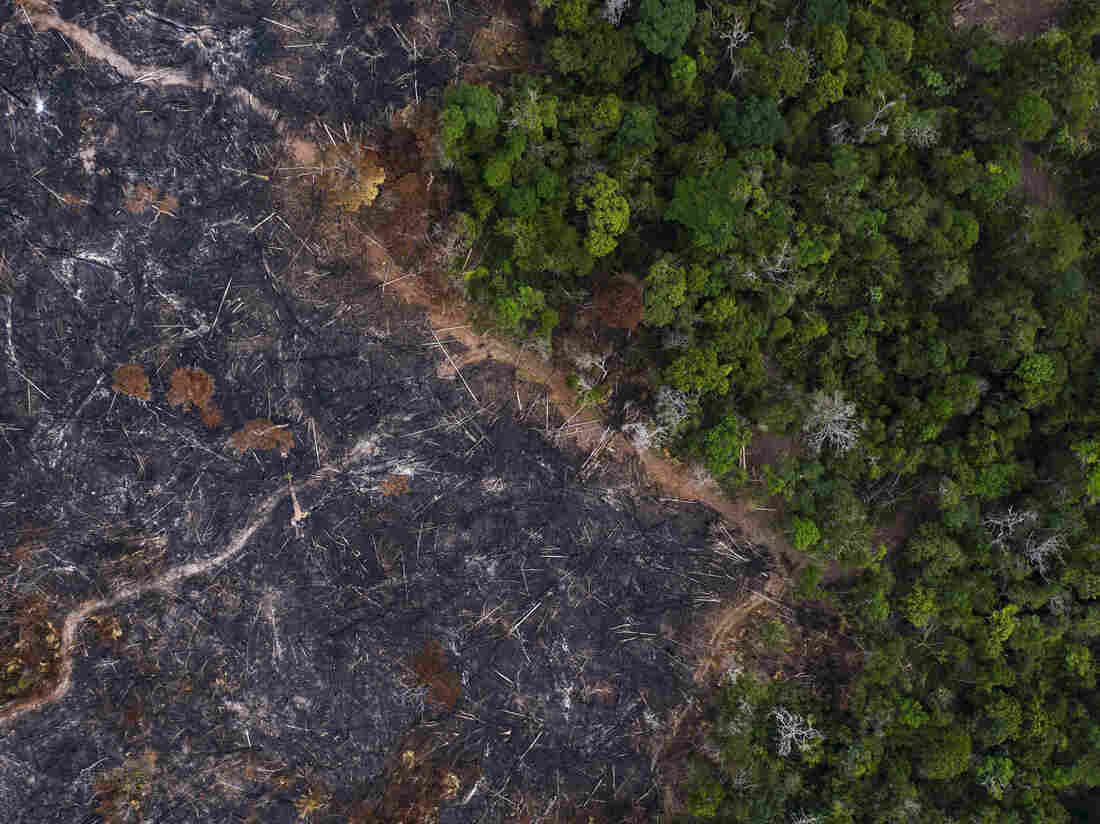 A burned area of the Amazon rainforest in Para state, Brazil, in 2019. A growing body of evidence shows that forest loss and fragmentation can increase the risk of animal-borne infectious disease like coronaviruses. Leo Correa/AP hide caption 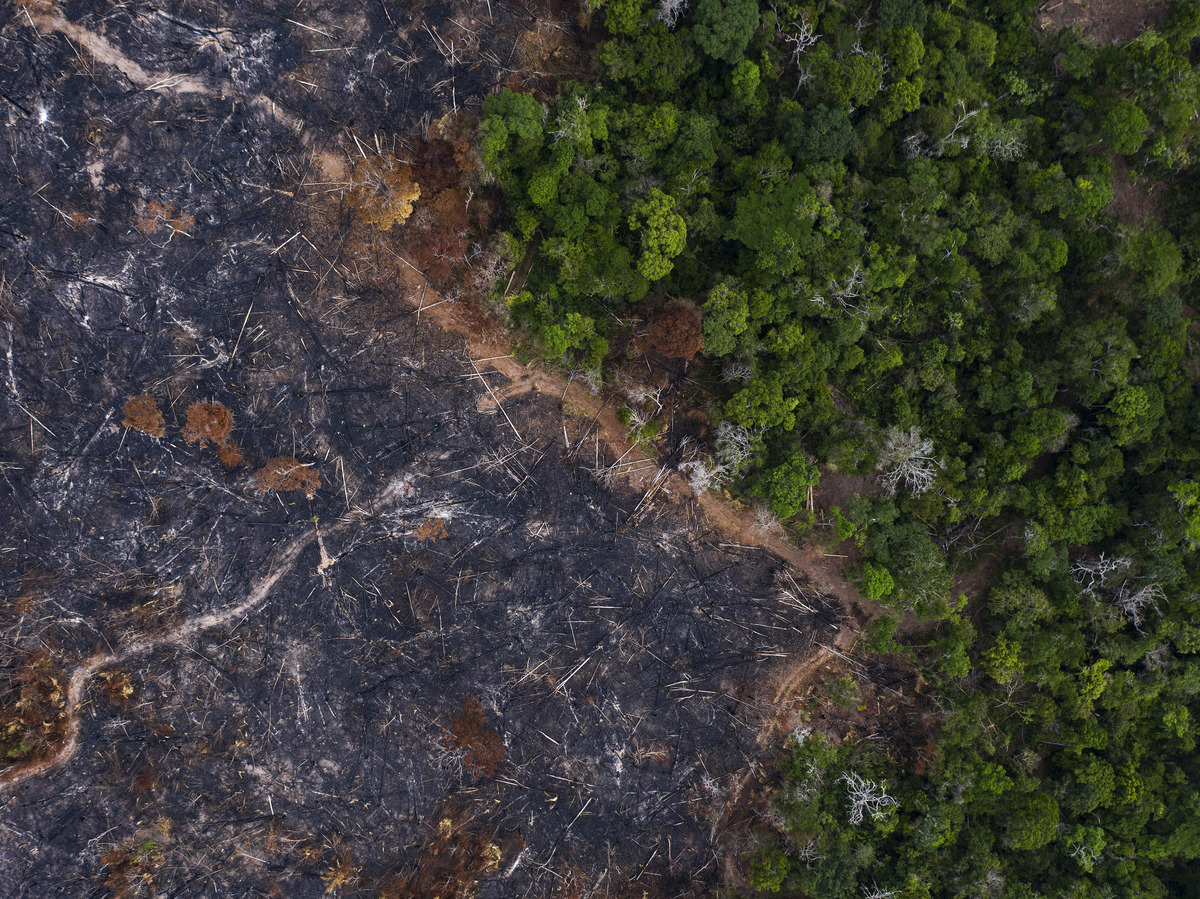 A burned area of the Amazon rainforest in Para state, Brazil, in 2019. A growing body of evidence shows that forest loss and fragmentation can increase the risk of animal-borne infectious disease like coronaviruses.

Six out of every ten diseases in humans, and three-quarters of the world's emerging infectious diseases, are zoonotic.

Many of them are familiar: Salmonella, malaria, Lyme disease. Others, like Rocky Mountain Spotted Fever or Rift Valley Fever, are more rare. Some are benign. Others, like the coronavirus that causes COVID-19, can be deadly.

For a spillover to occur, a number of things need to line up.

First, a pathogen (think: virus, bacteria, fungus) needs to find a way to make the jump from animal to human. Maybe it gets eaten by a hunter bringing home food. Maybe it gets passed in a mosquito's bite. Maybe it gets inhaled by a kid playing near a hollow tree.

However the pathogen arrives, its next job is to stick the landing, so to speak, warding off or evading the new body's defenses long enough for it to replicate and put down roots.

All of this can be made easier for a pathogen by a simple thing: proximity.

The closer humans are to animals (we're usually the provocateur), the greater the likelihood of interactions between them, and the greater the opportunity for zoonotic spillover.

The risk exists everywhere, but is especially high in the tropics where fast-growing human populations abut species-rich forests, says Christina Faust, an infectious disease ecologist at the Center for Infectious Disease Dynamics at Penn State University.

Unfortunately, the tropics also happen to be a hotbed of deforestation.

The world lost a soccer-field sized area of mature, tropical forest every six seconds last year, according to a recent report from the group Global Forest Watch.

Brazil alone accounted for more than one-third of the total loss, as wildfires and logging, largely to clear land for agriculture, tore through large patches of the Amazon.

This year is on pace to be worse. In the first four months deforestation in the Amazon was up 55 percent compared to last year, according to satellite data from Brazil's space research agency.

The country's president, Jair Bolsonaro, has pushed to weaken environmental protections to boost the country's economy. Last month, his environment minister was reportedly caught on camera calling for more deregulation while the press was distracted with the coronavirus.

Faust has spent much of her career studying spillover between animals and humans, and trying to understand what drives those events. She says there's a relationship between deforestation and the emergence of zoonotic disease, but it's not entirely clear why.

"We don't know if that's because we're losing biodiversity that would otherwise... help dilute that pathogen, or if it's because we have more humans coming in to the area and doing risky behaviors," she says.

The first theory — dilution — runs like this: If a bat sneezes in a forest rich with biodiversity, it's more likely that the pathogens carried in that sneeze land on another animal rather than a human. But with the world in the middle of a mass extinction, because of human activities and climate change, increasingly, "There's not much else out there to help pick up that pathogen," Faust says.

The second theory got a boost from a recent study out of Stanford University, which found that forest fragmentation near Kibale National Park in Western Uganda created more pathways for human-animal interaction.

Bloomfield found that changes to the landscape drove primates, which are known to carry a number of viruses, to come closer to humans to look for food. At the same time, impoverished people looked to the same places for resources to support their families.

The United Nations has expressed concern that the coronavirus pandemic could push hundreds of millions of people into poverty, driving migrations in some parts of the world from cities to more rural areas, like the kind Bloomfield studied in Uganda.

"The only social safety net they have is the waters, the land and the forest," which they may cut down for food and fuel, Mette Wilkie of the U.N Food and Agriculture Organization told the Thomson Reuters Foundation.

That may feel like a far away dilemma for people in more developed countries, but Bloomfield says the coronavirus pandemic has made clear that "human-animal interaction in one place can cause global devastation."

Researchers say there are ways to limit the chances of that happening.

The world could work to limit climate warming greenhouse gas emissions, which are stressing ecosystems and driving extinction, changing the behaviors and range of wild animals.

It could maintain protected areas of habitat, and create buffer zones around them to limit the interactions between people and wildlife.

It could support people in high-risk areas to lessen their dependence on natural resources. Disease, Bloomfield says, is an equity issue.

And it could invest in robust monitoring systems, to identify infectious disease outbreaks before they become pandemics.

The U.S. Agency for International Development (USAID) launched a program after the 2009 H1N1 flu pandemic to help detect viruses with pandemic potential and coordinate a global response. Funding for the program wasn't renewed in 2019. It's since been given two six-month extensions to help with COVID19, but that funding expires Sept. 30.

"There's a lot of strain on governments right now, financially and politically," says Amy Vittor, an assistant professor at the University of Florida's Emerging Pathogens Institute, who's documented links between deforestation and malaria outbreaks. "It's a very difficult climate for people to actually come together and work on these kinds of international solutions."

But she says action is needed because the warming climate and land-use changes are not slowing down. Every time humans alter the landscape, Vittor says, it's kind of like poking a beehive.

"If we continue to poke the beehive in nature, we will continue to see these kinds of events occur."