Accessibility links
An Electric Pickup Truck Brings New Energy To Lordstown, Ohio An old General Motors plant is being retooled to make a battery-powered work truck, the Endurance. The local community is watching closely, hopeful for a resurgence of good jobs. 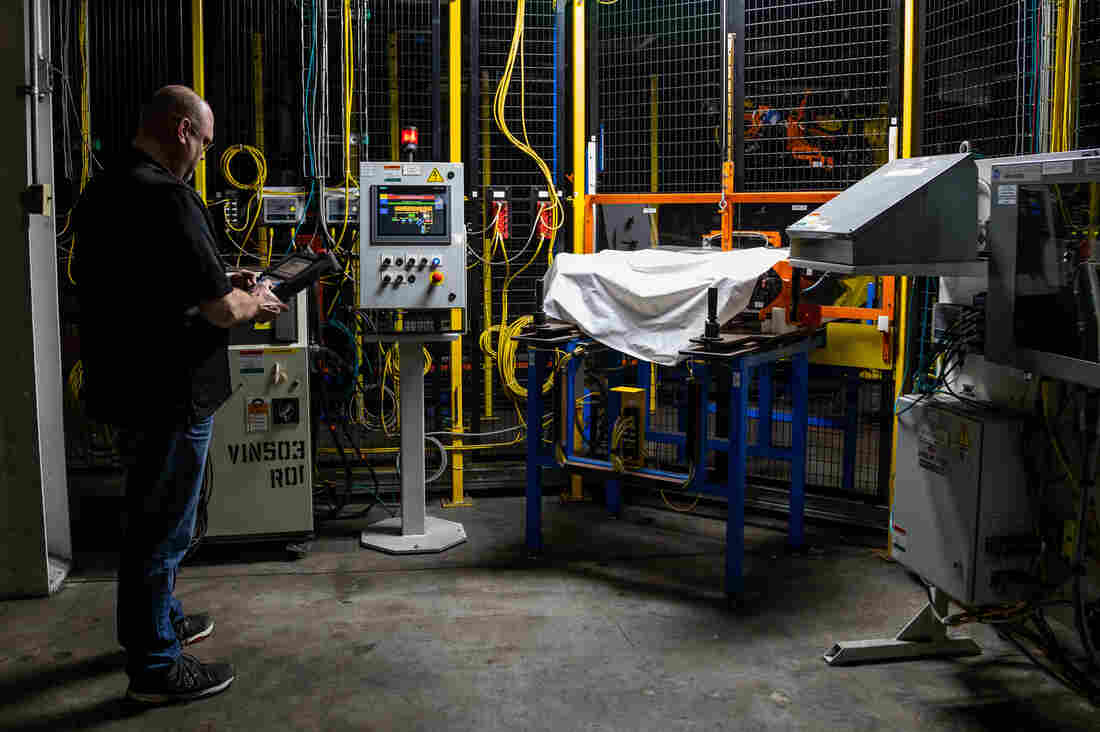 Dan Tasiemski, director of general assembly at the Lordstown Motors assembly plant in Ohio, works to revive a robot on the assembly floor of the factory. Carter Eugene Adams for NPR hide caption

When the General Motors plant in Lordstown, Ohio, went dark last year, it was a familiar story for the region. Yet another manufacturing powerhouse — a pillar of the local economy and a rare source of good jobs — was shutting down.

But the closure of the plant was not the end of the story. The factory was sold to Lordstown Motors, a startup building an electric pickup truck that's scheduled to be unveiled on Thursday.

And now Lordstown is a symbol of the industrywide shift toward electric vehicles — and northeast Ohio's hopes for a battery-powered economic revival. 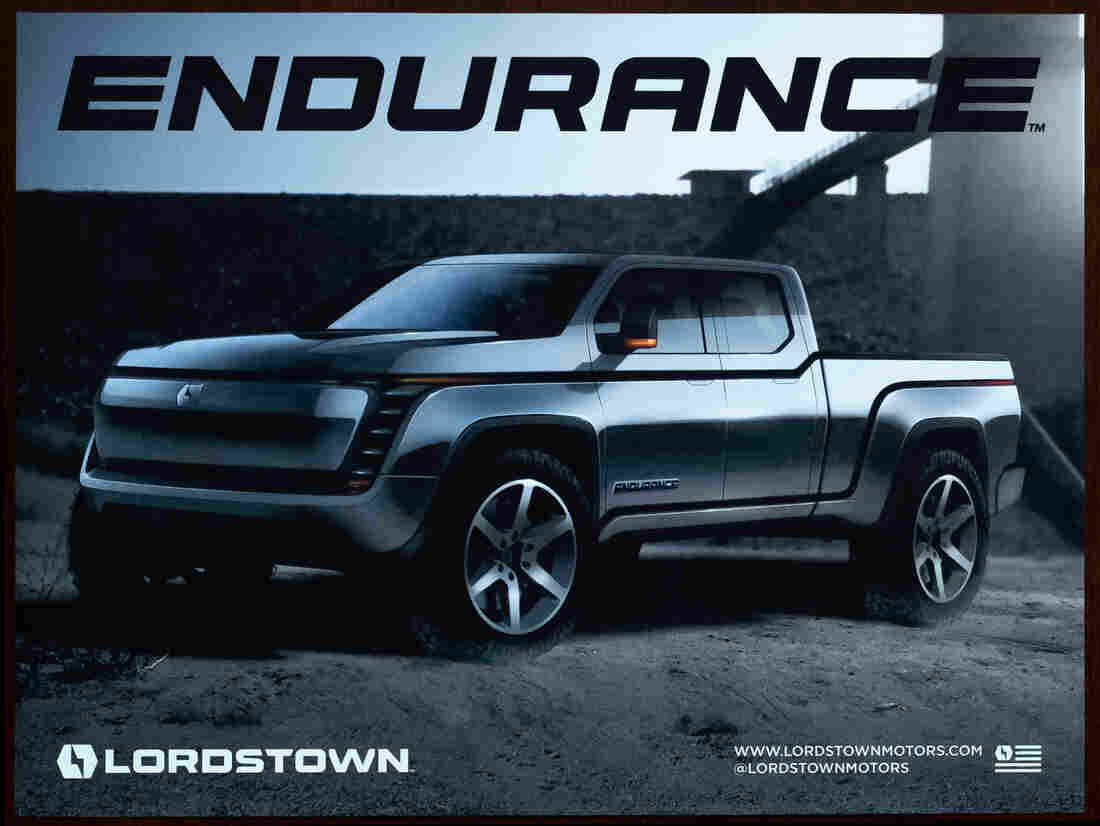 A poster for Endurance is seen in the office of Lordstown Motors CEO Steve Burns. Carter Eugene Adams for NPR hide caption 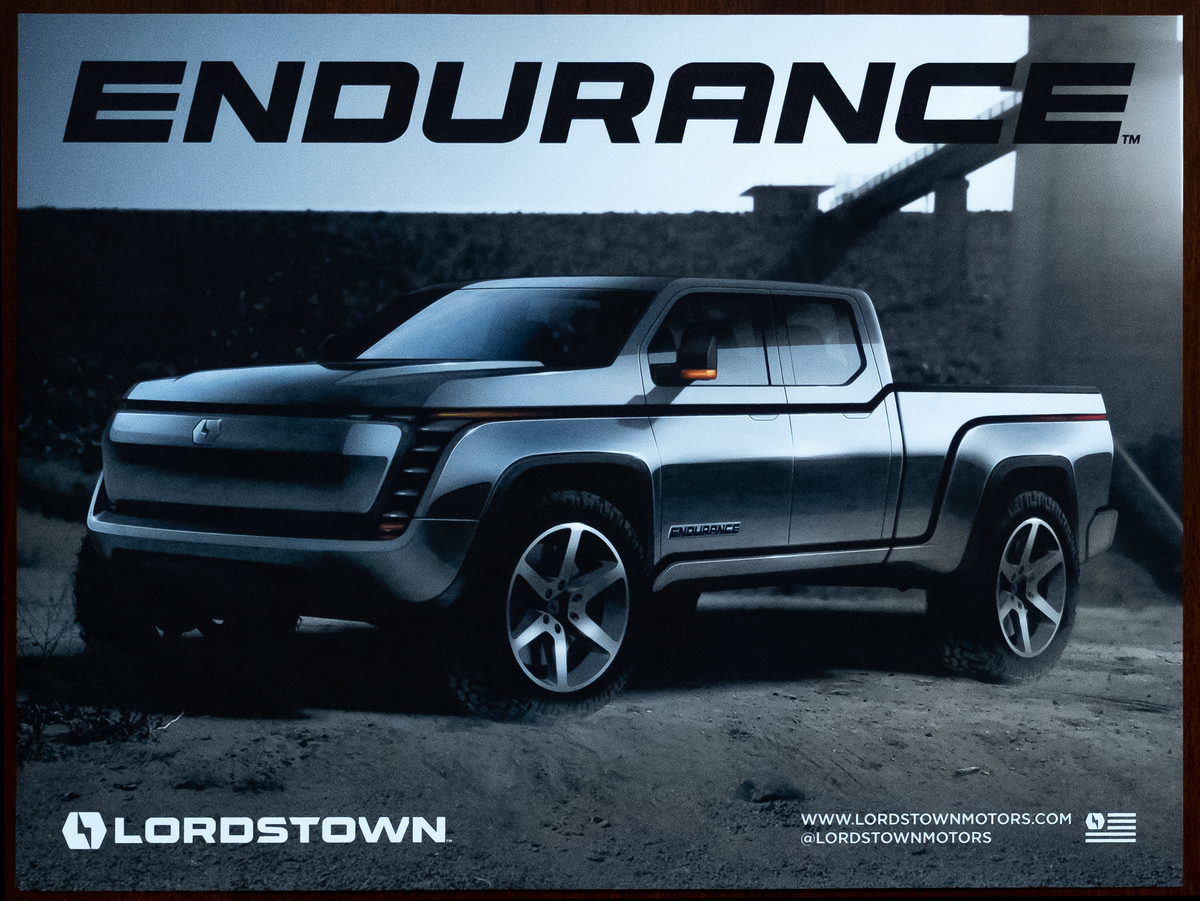 A poster for Endurance is seen in the office of Lordstown Motors CEO Steve Burns.

Steve Burns, the CEO of Lordstown Motors, says the company has ambitious plans to eventually hire thousands of people back to the plant. But one of the selling points of electric vehicles — their simplicity — also means they require fewer human hands to assemble them.

In its heyday, the General Motors plant in Lordstown bustled with more than 10,000 workers. The vast parking lots were full.

Youngstown native Frances Turnage worked at the plant for more than three decades starting in 1972, doing everything from assembly to welding. She says the work was difficult, but the pay and benefits for a unionized auto worker far surpassed the other jobs in the region.

Over the decades, she saw the plant transform.

"I looked around one day and I saw a lot of the jobs were empty and were replaced with robots," she says. "It got lonely. I actually would go in and make fun ... talking to the robots, you know, because that was all I had to talk to sometimes."

She retired well before GM shuttered the plant, but still wept at the decision. "That was just another blow," she said, to a region that had already lost so many jobs.

She's followed the news about Lordstown's plans for the facility. Like many in the community, she's wishing for the best. 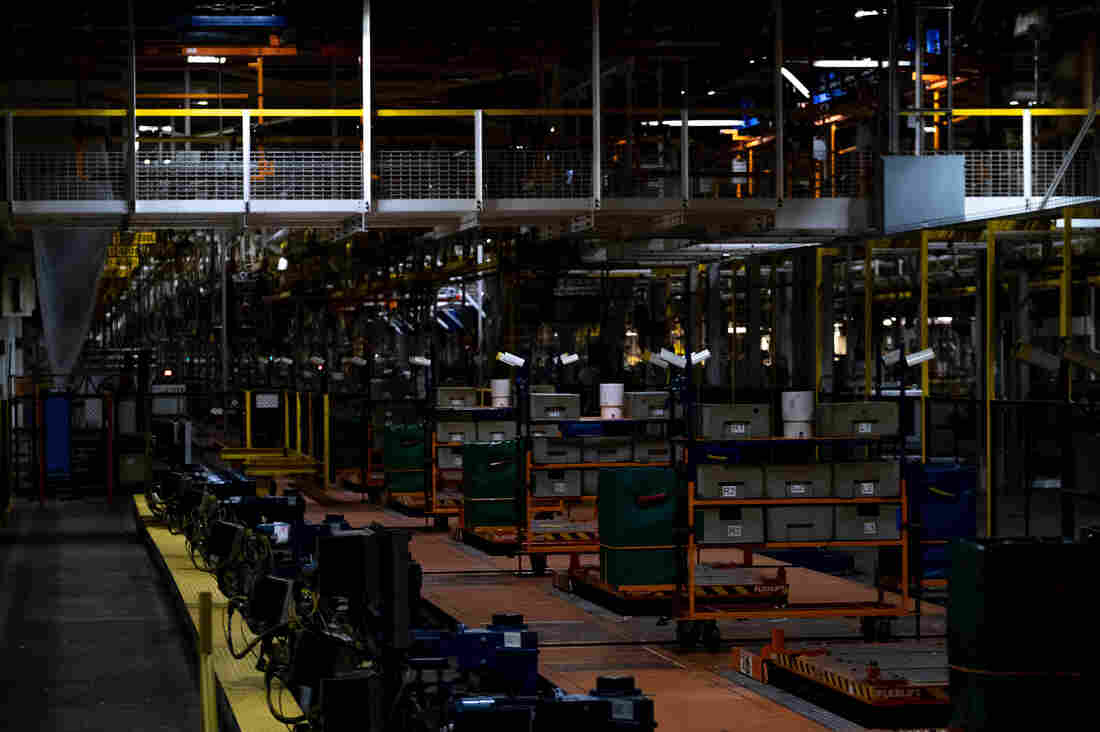 Inside the plant, teams have been working for months to convert assembly lines designed for the Chevy Cruze — a sedan with a gasoline-powered engine — so they can build a pickup truck powered by batteries instead.

Pickup trucks are popular and profitable, and multiple automakers are racing to bring electric versions to market within the next year or so. Tesla, which drove the industrywide shift toward electrification, has the Cybertruck. Ford is electrifying the F-150, and GM's new Hummer is an electric pickup. Then there are the startups: Nikola, Rivian and Bollinger, as well as Lordstown Motors.

George Syrianoudis, who worked in the GM plant for more than 30 years, retired when GM shut it down but leapt at the chance to come back and work on the retooling. Earlier this spring, he was powering robots back up to confirm that they still work.

"If something doesn't work, the nice thing is, we have a lot of extra robots that we're not going to need," he says.

Large portions of the vast manufacturing facility are walled off, dark and cold to save on power. The occasional worker passes through on a bicycle — the plant is 6 million square feet, or more than 100 football fields.

Much of the machinery for the Cruze can be resized or reprogrammed to work for the Endurance pickup. But not everything can make the switch. The battery pack line will have to be built from scratch, and the old engine line is completely irrelevant.

Instead of an internal combustion engine, the Endurance pickup truck is designed with four electric hub motors — that is, a motor incorporated into each of the four wheels. 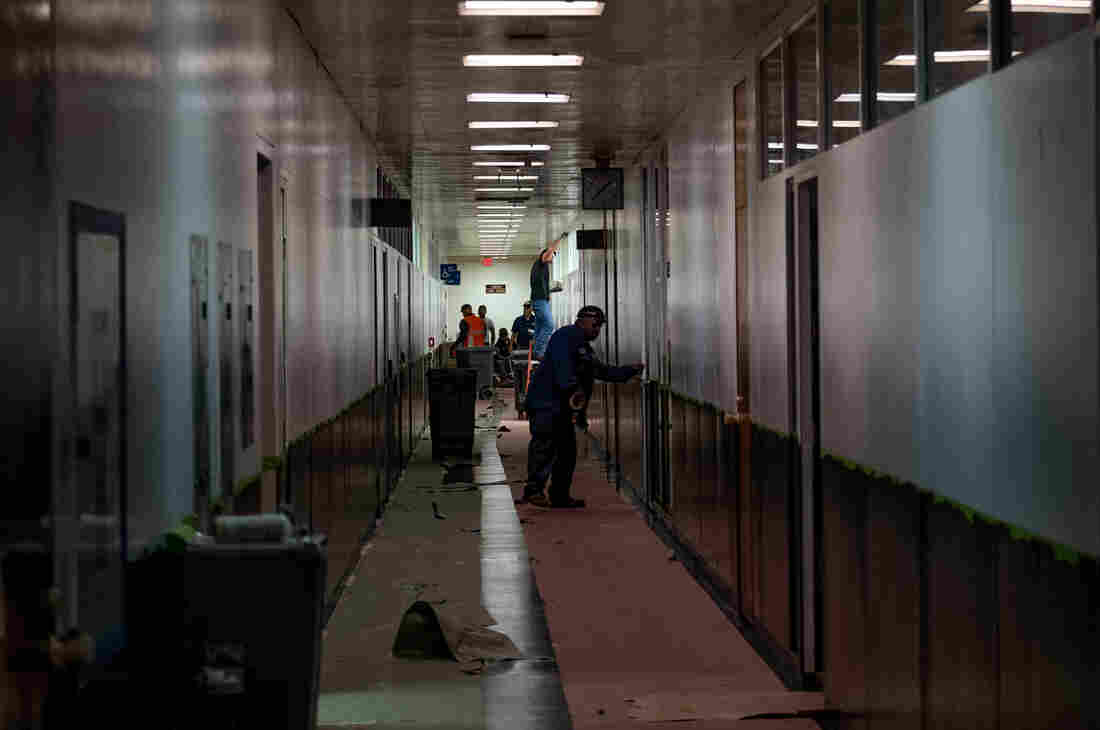 "This vehicle has four moving parts," says Burns, compared to hundreds or thousands for a typical vehicle. "You can't ever get simpler than the only moving parts are the wheels."

That means lower labor costs — which is to say, fewer jobs.

This is part of a much broader trend within the industry, says Kristin Dziczek, the vice president of labor, economics and manufacturing at the Center for Automotive Research. Think of Frances Turnage, talking to her robotic neighbors.

"Reducing complexity, improving the productivity of vehicle manufacturing, introducing more automation into the process — there are going to be fewer people building vehicles in the future no matter what they're building," she says.

But even a smaller number of jobs would be better than a totally empty factory.

"General Motors pulling out was terrible. Lost half my business," says Earl Ross Jr., whose family owns and operates a pub right across the street from the plant.

After the "rebirth" at Lordstown Motors, he's hoping for "brighter days ahead."

It's challenging to launch a new auto company at the best of times, and now Lordstown Motors is grappling with a recession. Still, the local community is hoping that, in the end, this will be a battery-powered success story. 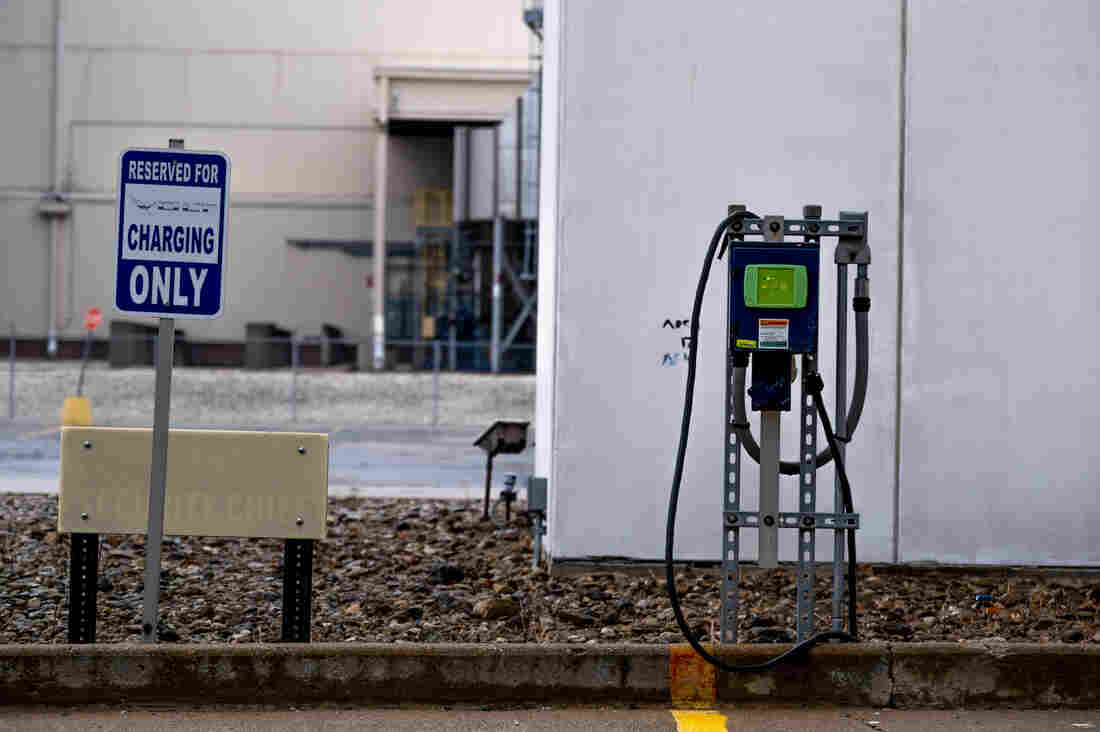