Accessibility links
Fauci, Redfield Testify On Trump Administration's COVID-19 Response House Democrats press the leaders of federal agencies for details on whether President Trump has stymied health experts from taking more effective action to stem the spread of the coronavirus. 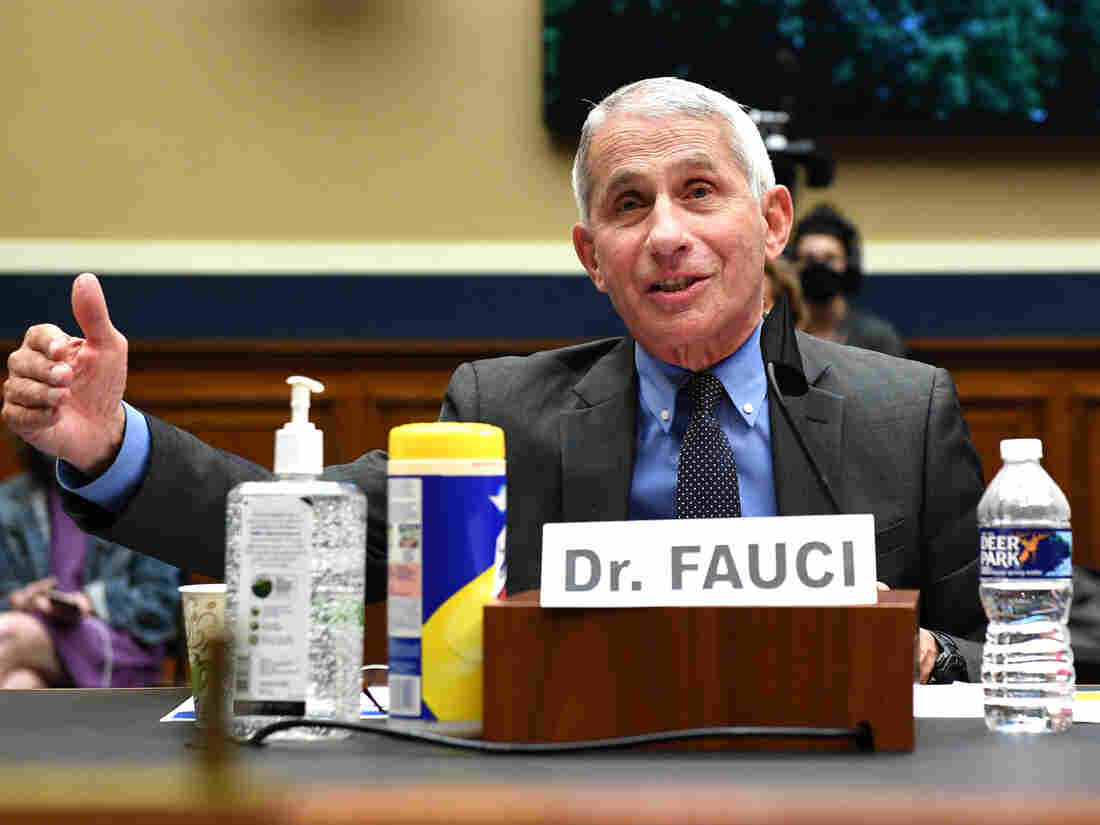 Dr. Anthony Fauci, director of the National Institute of Allergy and Infectious Diseases, testifies Tuesday during a House Energy and Commerce Committee hearing on the Trump administration's response to the COVID-19 pandemic. Kevin Dietsch/AFP via Getty Images hide caption 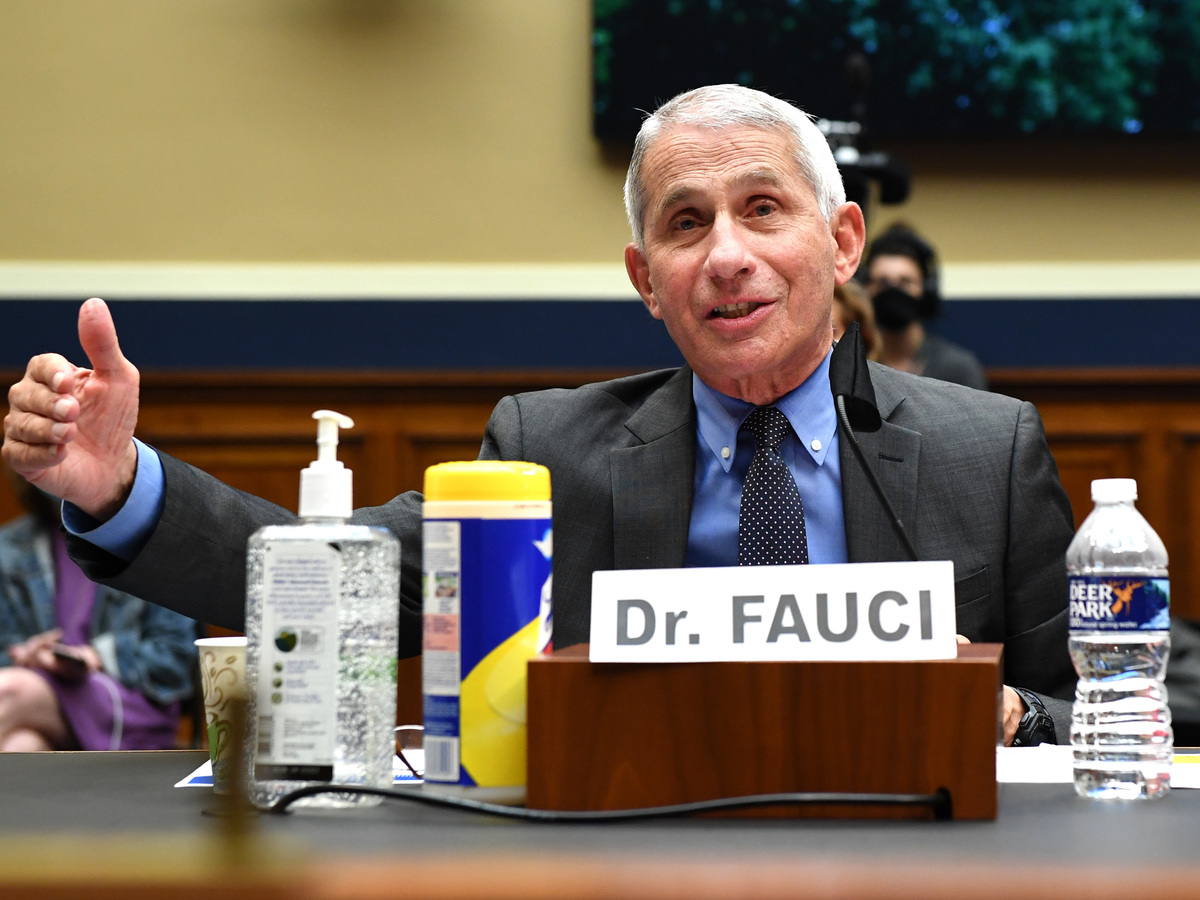 Dr. Anthony Fauci, director of the National Institute of Allergy and Infectious Diseases, testifies Tuesday during a House Energy and Commerce Committee hearing on the Trump administration's response to the COVID-19 pandemic.

At a hearing Tuesday on Capitol Hill, Dr. Anthony Fauci of the National Institutes of Health and other federal officials said that no one had told them — including President Trump — to slow down testing for the coronavirus. The statements came after Trump has repeatedly said that more testing would lead to more infections being revealed.

"None of us have ever been told to slow down on testing," Fauci told House Energy and Commerce Committee Chairman Frank Pallone Jr. of New Jersey. "That just is a fact." He said that more testing is needed and that officials are seeing a "disturbing surge" in new coronavirus cases in several states, including Florida, Texas and Arizona.

In addition to Fauci, those testifying include Adm. Brett Giroir, assistant secretary for health at the Department of Health and Human Services; Stephen Hahn, Food and Drug Administration commissioner; and Robert Redfield, director of the Centers for Disease Control and Prevention.

The hearing bore some of the hallmarks of an America battling the coronavirus. Fauci testified with a bottle of hand sanitizer and a container of Lysol wipes on the table next to him. A number of committee members joined the hearing by video from their homes, with weak Internet connections occasionally garbling their questions. All four health officials and many others in the room wore masks.

Trump has been much criticized for his handling of the coronavirus outbreak. The U.S. has the largest number of confirmed cases in the world — more than 2.3 million — as well as the most deaths — about 120,000. The daily number of people dying with COVID-19 has declined in recent weeks, but the number of cases is rising in many parts of the country.

The committee's Democrats pressed the health officials for details on why the federal response has not been more effective and whether Trump prevented health experts from taking action sooner.

As the most prominent scientist involved in the government's response, Fauci was occasionally put on the hot seat by both Democrats and Republicans. Rep. David McKinley, R-W.Va., asked him whether he thought criticism of Trump in the news media was unfair, noting that Fauci has sometimes contradicted the president's statements.

"I work in the White House, and I believe that everyone there is doing everything they possibly can to do what they need to do," Fauci replied.

McKinley then pointed to the lack of consensus about wearing masks, as late as March 31. He asked Fauci whether he regrets "not advising people more forcefully to wear masks earlier."

"OK, we're going to play that game," Fauci said, sounding annoyed. "I don't regret that, because let me explain to you what happened. At that time, there was a paucity of equipment that our health care providers needed, who put themselves daily in harm's way of taking care of people who are ill. We did not want to divert masks and PPE away from them, to be used by the people. Now that we have enough, we recommend. ..."

McKinley then cut him off and moved to his next question.

Later in the testimony, Rep. Jerry McNerney, D-Calif., asked Fauci and Redfield whether they had been consulted about Trump's decision to withdraw the U.S. from the World Health Organization. Fauci and Redfield said they had not been directly consulted, but that they keep working with the agency on health matters.

"The CDC has a long history of working with WHO. We continue that collaboration," Redfield said. "We continue working at the technical scientist-to-scientist level."

The health officials were also asked to predict what might happen next in the battle against the virus.

Fauci said there's a reasonable chance a vaccine will be available by the "beginning of 2021." He said that a billion doses of a vaccine might be available within a year or two, because companies already were starting to plan to make doses should one of the vaccines under development prove effective. The FDA's Hahn emphasized that while vaccine development is moving quickly, no corners are being cut in terms of safety.

Asked whether children will be able to go back to school in the fall, Redfield said the building of capacity for testing, isolation, contact tracing and self-quarantine is happening now, and that he anticipates states will begin reopening schools and colleges. Fauci said that what a return to school looks like will depend on local infection rates — places with low levels of infection may be able to open normally, while others will need to make alterations that allow for social distancing.

Rep. Bobby Rush, D-Ill., raised the issue of how the virus has disproportionately endangered African Americans and other minorities. He asked Fauci whether institutional racism could be considered a comorbidity for COVID-19.

"Obviously, the African American community has suffered from racism for a very, very long period of time," Fauci said. "And I cannot imagine that that has not contributed to the conditions that they find themselves in, economically and otherwise. So the answer, congressman, is yes."

Rep. Adam Kinzinger, R-Ill., who said he had recently received a negative result on an antibody test, asked about the value of antibody testing if it's not known whether antibodies confer protection against future infection.

Redfield said antibody testing is valuable to the CDC as a virus surveillance tool. "It allows us to see what the full extent of the infection [is]," he said. "Right now, the data at a national level suggests that for every documented infection that you have as a case report, there's actually about 10 other individuals that had been infected."

Members of the House committee probed topics that ranged from decisions made at the beginning of the crisis to Trump's remarks in recent days.

At his campaign rally Saturday in Tulsa, Okla., Trump said he told his administration to "slow the testing down" for the coronavirus.

"When you do testing to that extent, you are gonna find more people, you're gonna find more cases," Trump said. "So I said to my people, 'Slow the testing down, please.' They test, and they test. We have tests that people don't know what's going on."

Democrats have seized on those comments as evidence that Trump is putting politics ahead of the lives and livelihoods of Americans. Pallone and Rep. Anna Eshoo, D-Calif., both expressed anger that Trump had held the rally, which gathered thousands of people and did not require face coverings.

At a press briefing Monday, White House press secretary Kayleigh McEnany said Trump has not directed officials to slow down testing and instead has "led the way in making us the world's leader with regard to testing." She said that in his Tulsa comments, Trump "was joking about the media and their failure to understand the fact that when you test more, you also find more cases."

McEnany praised the president's response. "We could have lost 3 million lives, but we lost far fewer because Trump took action early," she told reporters.

On Tuesday morning, Trump told reporters that he was not joking.

"I don't kid," Trump said. "Let me just tell you — let me make it clear: We have got the greatest testing program anywhere in the world. We test better than anybody in the world. Our tests are the best in the world, and we have the most of them."

During Tuesday's testimony, Redfield said the U.S. is now doing 500,000 to 600,000 tests a day, and that surveillance is critical due to the often asymptomatic nature of coronavirus infection. "We're continuing to try to enhance testing," he said. "It's a critical underpinning of our response."

When asked what they needed from Congress to combat the virus, the health officials expressed gratitude for the congressional funding already received, but Redfield noted that such investments need to be "sustainable" rather than sporadic.

Fauci said there was a need to establish "corporate memory."

"We are going through a terrible ordeal right now," he said. "This will end hopefully sooner rather than later, but we need to establish a system so that we are prepared for future outbreaks."